Just over a year ago, Rob Arthur put together a series on plate discipline in which he used integrated probabilistic models to evaluate batters’ decisions to take pitches. It’s well worth going back to read in full, but for our purposes, I offer the nugget that I would remember most often throughout the 2015 season: Rob’s model found that Matt Carpenter was one of the 10 or so worst hitters in baseball at deriving value from taking pitches. That confused even Rob, who wrote, “Carpenter walks plenty, has good plate discipline statistics, and yet gains little value, at least on average, by taking pitches.”

Now, Carpenter took a ton of pitches during the period of that study, so though he wasn’t getting much from each individual take, he racked up plenty of value simply by taking a very, very patient approach. Still, Rob’s model had found something significant. Maybe Carpenter’s approach was too simplistic, or too passive. One way or another, in terms of leveraging each decision not to swing into added probability of the at-bat ending well, Carpenter was missing something.

It’s unlikely that Carpenter read Rob’s piece, but maybe someone who worked for the Cardinals did, or maybe the team’s deep thinkers reached the same conclusion by another path. In any case, 2015 brought us an almost unrecognizable Matt Carpenter—and probably an optimized one.

Carpenter still took a patient approach at the plate this season. Of the 213 batters who saw at least 1,500 pitches, only 10 swung at a lower percentage of them. He’d been the least prolific swinger of 2014, though, and the change in the raw rate of swings (from 32.6 percent in 2014 to 38.7 percent in 2015) was significant. He made a particularly remarkable adjustment on pitches down in and below the zone—the kind Jon Roegele’s research shows us are becoming more likely to be called strikes every year. In other words, he turned some of his most suboptimal takes into swings.

As a result of that adjustment, Carpenter started driving pitches at which he wasn’t even offering in 2014.

That really is a sensational change in approach, and probably a laudable use of the information available to him. Taking an extremely passive tack was allowing Carpenter to get on base a lot, but it wasn’t the best way for him to maximize his overall offensive output. That change in approach is only part of the story, though. Carpenter also increased the degree to which he bent his knees in his batting stance, and the magnitude of his (still fairly small) stride. The confluence of his physical and philosophical changes led to the most telling, most remarkable change in his stats this season.

Why did Carpenter hit 28 home runs this season, 20 more than in 2014, more than twice as many as he’d hit in his big-league career prior to 2015? He lifted the ball way, way more often, by getting aggressive at the plate and altering his swing. In this look at his strike zone, showing groundball percentage relative to pitch location, focus on the lower band.

Call that a result of mechanical changes, or a matter of looking for the ball down and getting to more of them with a fuller, lifting swing, but either way, Carpenter became dangerous on pitches his opponents had been able to throw comfortably in previous seasons. He found his full power potential, and even if he never hits 25-plus home runs again (still the way to bet), he’s established an ability to change in response to pitchers and league dynamics.

Now, for every adjustment one party in a hitter-pitcher confrontation makes, there is a counter-adjustment. Predictably, as Carpenter changed the frequency with which he swung, the bat path he traced, and the pitches on which he did damage, opponents changed the way they attacked him.

This is where one can start to see how Carpenter went from striking out less than 15 percent of the time over the two previous seasons to whiffing 151 times (22.7 percent of his total plate appearances) in 2015. Overall, over half of the pitches he saw still crossed through the strike zone. Recall that in terms of swing rate, Carpenter went from the outermost outlier of patience in 2014 to merely very patient in 2015. Something similar happened in terms of the frequency with which he saw strikes. In 2014, he saw easily the highest percentage of his pitches cross through the zone, out of the 208 qualifying batters. In 2015, as he found success with a more aggressive approach that covered the plate better and flashed much more power, Carpenter scared pitchers into treating him somewhat more carefully: his zone rate ranked 18th among the 213 qualifiers.

In 2016, Carpenter will be 30, and he’ll have even more adjustments to make. If his power breakout is real, pitchers are only going to get more cautious with him, and he’ll have to manage the balance between the healthy aggressiveness he found in 2015 and a hyper-aggressive, self-destructive approach. The Cubs held Carpenter to a rough 4-for-18 in the Division Series last month, and managed five strikeouts of him (against one walk). He did hit a home run, but all in all, the Cubs won the battle. Look at how they approached him. 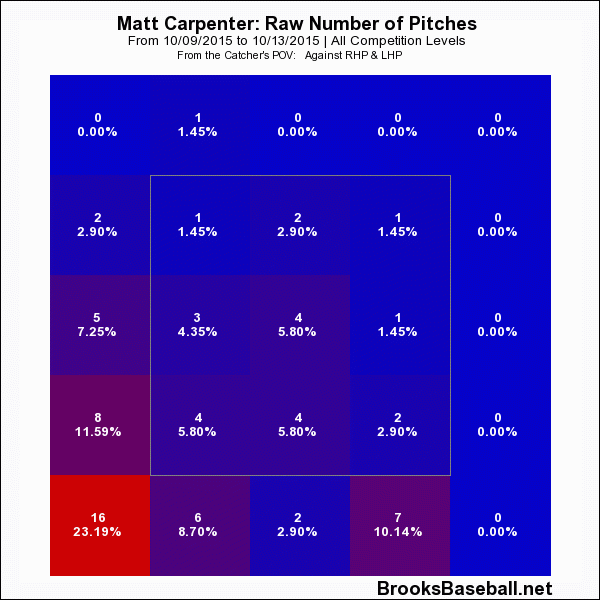 The walks were there for Carpenter, but he got overeager and didn’t draw them. He’ll have to be his excruciatingly disciplined self going forward, even as he makes an attacking mentality more a part of his game at the plate.