Gray has been on a horrific run, giving up hits, walks, and homers like they're going out of style. Since the calendar flipped to September, he has a 6.84 ERA over 26.3 innings, having given up 34 hits and 13 walks over that stretch while striking out a modest 19 batters. His last start was solid, efficiently maneuvering through six frames of two-run baseball against the Giants. He even struck out seven batters, which sounds boring until one realizes that he hadn't struck out more than four batters in a game yet this month.

The last two columns in the above table are especially pertinent. First of all, the pitch counts are surprisingly low, even for a player who has only exceeded 110 pitches in a game twice this season and considering that some of the outings were truncated due to poor performance rather than lack of stamina. The final column is the even more glaring, though we need the context of the full season to understand why.

Prior to August 28th of this year, Gray had averaged more than 93.3 mph on his fastball in every single outing, cracking a 94.0-mph average in 19 of his first 22 starts and peaking at an average of 96.2 mph against the Yankees on May 29th. Yet since late August, Gray has failed to crack 93.0 mph in five of his last six starts, the one exception incidentally being in the one game where the stats matched the reputation. There are trigger points on the calendar that mark his decline, but the month-to-month trend has stayed on a down slope. His September velocity qualifies as the lowest month of his career,and the ripple effect has been felt by every pitch in his repertoire, giving up two miles-per-hour on his four-seamer, sinker, cutter, and slider. He's on a four-month run of losing at least 0.6 mph per month since June

Gray has traditionally held velocity extremely well, but the sudden dip in pitch-speed is a bit alarming, and thus far he has failed to make up the difference in the department of pitch command (plot from his start on September 14th).

A simple plot fails to demonstrate command since we can't see where the catcher was set up on these pitches, but Gray's location pattern illustrates a common trait among pitchers who throw over-the-top, and that is a distinct lack of lateral variation on their pitch locations but an almost cylindrical pattern when looking at the vertical component. As I have often said with pitchers who invoke spine-tilt to manipulate a higher arm slot, the result is that mistimed pitches that are early or late have the consequence of missing targets high or low, with little lateral variation. In other words, most of what these pitchers throw is within the black outlines of the plate, but elevated pitches and 55-footers are plentiful. Gray falls into this category.

The right-hander is one of these spine-tilting pitchers, as the greatest flaw in an otherwise efficient delivery is that he invokes a late change of posture, contorting his spine during the phases of highest intensity in the kinetic chain of pitching. The spine-tilt is blatant and clearly intended to manipulate the flight path of the baseball, coaxing a taller release point in general while specifically drifting on the lateral plane based on the type of pitch that is being delivered. This concept gains steam when looking at the plot of his release point (also from September 14th):

The plot of his release points shows how Gray subtly alters his arm angle on each type of pitch. He exaggerates the over-the-top angle on his curve and effectively brings his release point closer to the first-base side (orange dots to the right of the cluster, catcher's POV), but he minimizes the spine-tilt on his change-up and sinker (blue dots and gray dots to the left), almost as if he is trying to push to the arm-side in order to encourage movement. Maybe it's subconscious or maybe it's conscious, but the difference is subtle enough that the trend is unlikely to tip his pitches. Keep in mind that he also has the four-seamer that sits beneath all of the other dots, sticking near the nucleus of the cluster and further masking his intent from the eyes of the batter. 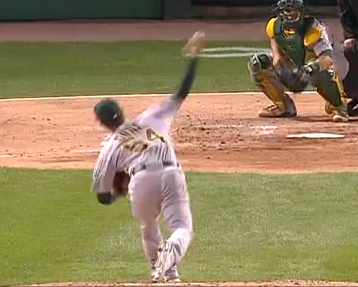 Combine the downtick in velo with shaky command and you get the recipe for an explosion. He gave up two homers to the White Sox in the seven-run beatdown on September 14, but the most telling moment of that frustrating ballgame was the four-pitch walk that he handed to Alexei Ramirez (he of the 5.0-percent walk rate) with the bases loaded in the fourth inning.

I have previously noticed how pitchers with egregious spine tilt (a precursor to shoulder injury) tend to lose velocity more rapidly once the decline sets in, and I have noted anecdotal evidence every time that I have done my annual “Under the Gun” series, highlighting players that have lost the most velocity. The ties between shoulder health and velocity have been established, but when an extreme spine-tilter like Greg Holland suddenly loses several ticks off of his fastball, I can't help but think that his pitching mechanics were a contributing factor. I give Gray marks of 50 (league average) or better on four out of his five subjects on the mechanics report card, but the outlier is the below-average posture that results from his manipulated release point.

The cause for concern with Gray is long-term, as the A's can just close up shop on 2015 and call it a day, shutting him down to hope that a winter of rest and rehab will do the trick. Perhaps that's all he needs, but there are some warning flags to indicate that his top-end stuff might not survive the trip. The command can be fixed but the velocity drop is a harbinger of doom, and the story of “the spine-tilting pitcher who lost his velo” is all too familiar. He's still another year away from arbitration so the A's can have him for about a half-million bucks in 2016, but they are no strangers to booting talented young players out of town when they see an opportunity to reap value, and they might decide that Gray's market value has peaked, so don't be surprised if he's pitching in a different uniform next season.

You need to be logged in to comment. Login or Subscribe
lmarighi
As an A's fan, and a Sonny Gray fan, I don't want this to be the case, but I appreciate the well-crafted argument, and now I am worried.
Reply to lmarighi
ErikFanClubPres
I'd like to see a Sonny Gray for David Peralta and Archie Bradley trade
Reply to ErikFanClubPres
pford68
RE: "I have previously noticed how pitchers with egregious spine tilt (a precursor to shoulder injury) tend to lose velocity more rapidly once the decline sets in...."

What is so egregious about his spine tilt? As a non-scout, I can't tell.
Reply to pford68
tombores99
Check out the following article, in which I break down the posture spectrum to explain the grades that I give out for pitching mechanics.

Gray varies between 40-45 grade on his posture.
Reply to tombores99