The Blue Jays’ trade deadline acquisitions haven’t all been magic beans. Troy Tulowitzki, The Big One, is done for the rest of the season with a shoulder injury, and when he did play, he wasn’t really that good—a .682 OPS in 39 games.

David Price, on the other hand, has been straight-up dynamite. In 62 1/3 innings of work, he has given up 49 hits and struck out 74 with 16 walks. He seems like he might have even adjusted his batted ball strategy to better conform with the homer-happiness of the Rogers Centre: Price has a 0.85 GO/AO rate as a Tiger earlier this season, but that ratio has jumped to 1.04 in his time as a Blue Jay.

Monday night was perhaps Price’s most important start, with the Yankees in town for a three-game series that could flip the pecking order in the division, and Price worked over some early trouble spots to shut down the Yankees, retiring the final 14 batters he faced.

He had allowed just a single to Alex Rodriguez by the top of the third, and he retired Didi Gregorius to begin that inning, but a throwing error by Cliff Pennington that allowed Dustin Ackley to reach brought some trouble to the surface.

Jacoby Ellsbury singled, and then Brett Gardner walked. The Yankees were still down 3-0 at that point (due to RBIs from Jose Bautista, Edwin Encarnacion and Justin Smoak in the first inning), but at least a run was necessary to chip away.

Price would have none of it. He whiffed Alex Rodriguez…

…and while Brian McCann put a solid swing on a ball to center field, Kevin Pillar made a play on it.

The Yankees couldn’t muster another offensive threat until Price exited. Jacoby Ellsbury singled to center off Brett Cecil to score Didi Gregorius in the eighth and make the score 4-1, and Greg Bird hit a dinger to dead-center off Roberto Osuna in the top of the ninth.

That looks like a double but umps later determined that the ball hit off the dark panel above the center field fence. Bird was the only word for the Yankees in the ninth, because Gregorius flew out to Pillar to end the game four pitches later. The Blue Jays are 3 1/2 games ahead of the Yankees. A change in division leader will not happen during this particular series.

I remember writing in this exact column space about three months ago about the prospect of a “post-offense” Cardinals club. St. Louis had just lost Matt Holliday to injury and had just gone through a short stretch of offensively challenged games against I don’t even remember who, because it doesn’t even matter now, because the Cardinals have continued to be awesome and brutally squash everything in their path.

A part of that, in traditional Cardinals fashion, has been how they’ve received production from guys whose names you didn’t even know until they were mashing against your favorite team. Tommy Pham’s OPS is 1.085 over the last 15 games, and while Stephen Piscotty has been slumping in his past seven games, his .854 OPS since getting called up in late July makes that easy to forget.

These exact two guys figured into the Cardinals’ comeback win against the Reds on Monday. Fast forward to the eighth inning, when the Cardinals were down 1-0. Pham tripled on the first pitch of the inning, though Jason Bourgeois bobbling the ball in center field helped out a bit.

After Jason Heyward grounded out and failed to get Pham home, Jhonny Peralta singled to center to score him. Peter Bourjos pinch-ran for Peralta, and that move sure made Mike Matheny look smart, because Piscotty doubled to the fence, and while the ball was hit well, it probably would have only scored someone with speed like Bourjos’.

Trevor Rosenthal shut the door in the ninth, and despite the Pirates’ 9-3 win over the Rockies, St. Louis kept its lead at four games, and (for now) series-sweep-proof. Those two teams meet for a three-game set at PNC Park starting Monday. It could get very wild.

Time to play Is It Shelby Miller or The Braves Who Are Really Bad? I’ll spoil the fun for you now and tell you that it’s the latter of those two choices. Shelby Miller is actually pretty good, and he might be having the best season of his career.

I mean, by any metric other than wins or ERA, Miller is having the best season of his career. His ERA before Monday’s start against the Mets was 2.99, more than a run lower than either of his full seasons with the Cardinals. He has accumulated almost triple the WARP, at 4.5, of his 2013 season, which was his previous best.

But Shelby Miller is 5-16. He doesn’t know how to win, which is an unfortunate quality to lack (or have, depending on how you look at it), because the ultimate object of a baseball game is to win, or at least it is until the nerds and their spreadsheets take over everything.

On Monday, Shelby Miller lost again, and while it wasn’t entirely his fault, he could also have been a bit better. He gave up two runs in six innings against the Mets and walked four to three strikeouts. The first came on a weird ol’ double play, where Adonis Garcia fielded a grounder at third with the bases loaded and went to second, where he got the out but Andrelton Simmons didn’t make the turn to first. Curtis Granderson had scored by then, but Daniel Murphy was caught between second and third, so the Braves tagged him out. 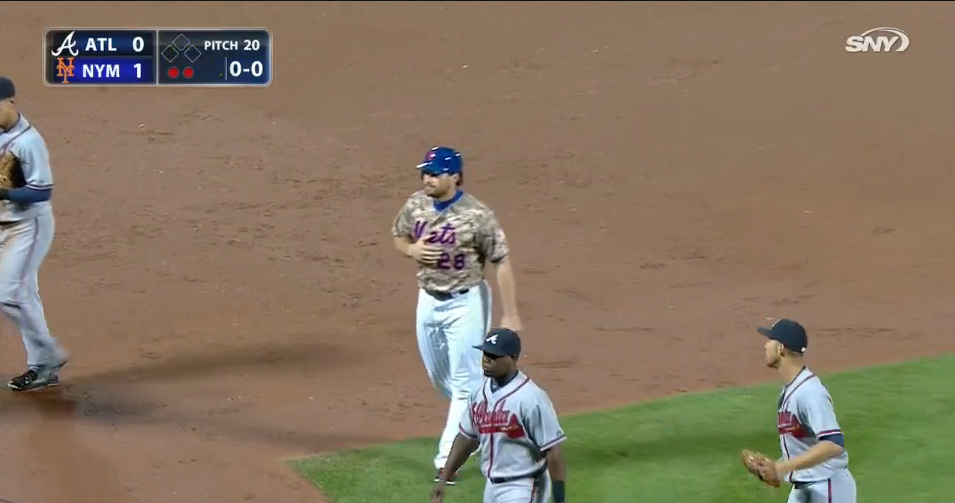 Yeah, that was your bad, Dan. Michael Conforto hit a solo home run in the next inning, and that was more than enough for the Mets. The Braves could only manage three hits off Jon Niese, for heavensakes, and eventually dropped the game 4-0. The 56-94 Philles are currently the leaders in the race for A.J. Puk, but the Braves are just 3 1/2 games behind.

I like to think that in the wilder days of Major League Baseball, back in the 70s or something, when guys were popping greenies like Cheetos and running around with women in between batting practice and the national anthem and just generally being rascals, that plays like this were part of PFP.

In spring training, coaches would gather all the rookies together on the mound and have one of those guns that riot police use to shoot beanbags repurposed to fire baseballs. Players would either catch the balls or see their careers end due to a broken hip. Those days were something else, I tell you. That’s obviously why David is smiling here: He’s remembering those fun times in spring training and how he survived.

We fired up the BP Wayback Machine on Friday to take a look at Matt Moore, who had just had a sterling start of seven scoreless innings, two hits and nine strikeouts. The progression in Kevin Goldstein’s reports on Moore is pretty fascinating, ranging from “wow, this guy’s pretty good, but he’s still pretty young and raw” to “I see no other option for young Matthew than runaway success.” This makes it all the sadder to see how far Moore has fallen this season and how encouraging and exciting it could be to have him in the sort of form he was in on Thursday.

Tonight, we shall see. Moore faces a version of his former self in Red Sox lefty prospect Henry Owens, in a game largely absent of intrigue but for its two starting pitchers. Moore’s velocity has climbed throughout the season to where his fastball is now sitting at around 93.5 mph. More than anything, Moore’s control was finally all there on Thursday, as 67 strikes (in 93 pitchers) were the most he’s thrown all season and he didn’t walk anybody.

Will Matt Moore have another great start and carry this positive momentum into next season? I sure hope so, and I bet Stuart Sternberg does, too.

Also, Luis Severino is pitching! The stud Yankees prospect has been having a pretty solid year, though his 4.16 DRA and 4.17 FIP doesn’t exactly agree with his 3.12 ERA. Severino has shown the control shakiness typical of a young arm, with three or more walks in five of his eight career starts. He’s always struck out more than he’s walked, though, so that certainly helps.

Severino has shown groundball pitcher tendencies, with a ration of 1.28 groundouts to every flyout so far, and he’s even been a bit unlucky with the flyballs he has allowed, as 15.4 percent of them have gone for home runs. Severino is a start removed from his worst outing as a Yankee, where he gave up six runs in 2 1/3 innings to the Blue Jays, with two dingers and three walks among the carnage. In that start, according to Brooks Baseball, 18.5 percent of Severino’s fastballs were “grooved,” so clearly he didn’t have his best command that day. Will tonight’s outing against the Blue Jays be better? Tune in at the palindromic time of 7:07 eastern to find out!

On Sunday, Yoenis Cespedes broke a four-game hitless streak with a double down the left field line. Before the game, he said this, reflecting on matters of mortality:

"The only thing I'm scared of is death," Yoenis Cespedes said. "And I'm not even scares of that."

Oh…oh, god. I think I’m scared of Yoenis Cespedes now. Anyways, since he said that he’s been doing all right at the plate, getting that aforementioned hit on Sunday and then going 3-for-4 on Monday with two doubles. Tonight, he faces the Braves and Matt Wisler, who probably wishes that Cespedes would just retire and go into barbecuing full-time.

You need to be logged in to comment. Login or Subscribe
jarretthaines
Shelby Miller doesn't win because he doesn't love Jesus enough
Reply to jarretthaines
stuwhite
... and he is probably jealous of our freedom!
Reply to stuwhite