On June 20th a relief pitcher by the name of Chaz Roe threw what can only be considered a ridiculous pitch:

Yep. I've used the phrase "Frisbee-like" to describe good breaking balls before, but that doesn't do this pitch justice. Recently we took a look at the best pitch of all time and who the contenders were to repeat, or improve upon, that masterpiece. Let's consider this a follow-up, where our search criteria hones in on the pitches with as much horizontal movement as possible.

Let's start by diving into Roe's pitch in more depth. It left his hand at 83 mph and moved more than two feet to Roe's glove side before arriving at home. The pitch moved so much that it didn't fit properly on the Brooks Baseball scatter plot: 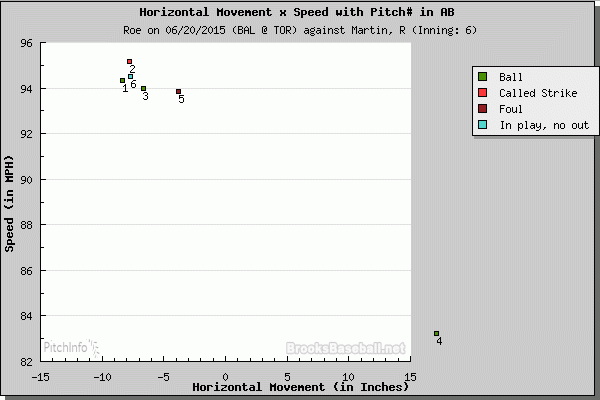 Who is Chaz Roe? He, like Daniel Bard of "Greatest Pitch of All Time" fame, has had a pretty typical MLB life for a reliever. Roe was a top pitching prospect coming out of high school, which led to his selection in the first round of the MLB draft by the Rockies. It would be eight years, three teams, and four minor-league levels before Roe got to pitch in the major leagues, making his debut in 2013 for the Diamondbacks.

The following season he landed in New York, but spent most of his time in Scranton, the Yankees' Triple-A affiliate. This season however, the Orioles brought Roe up to fortify their bullpen after 24 very good innings for the Norfolk Tides.

Roe's age (28) belies his experience, as he's thrown more than 925 innings as a professional. Only 43 of those innings have come in the major leagues, however. Roe's career, like the pitch above, has taken a wildly unexpected turn wherein he's quickly become a relief ace for a team that fancies itself a contender.

The pitch in question has the distinction of being the offering with the most horizontal movement thus far in 2015. You don't need me to tell you that it's an outlier. Even if we knew nothing else, the simple fact that it doesn't fit on the scale of the Brooks Baseball plot would be a giveaway. The question, though, is how much of an outlier it really is. In order to better understand that, I asked the BP research team to pull the top 100 breaking balls from this season, as well as 2014, in order to see just how elite Roe's 28.6 inches of horizontal movement truly is.

On average, the top 100 breaking balls from this season have had 23.5 inches of horizontal break. (Again, that's long-form movement, not the typical short-form that you might be accustomed to seeing.) Roe's offering had nearly half a foot more movement than the average of the top 100, making it far and away the best such offering in 2015.

Roe's slider had more than two and a half inches more movement than the next closest pitch, a knuckle curve from Dellin Betances on June 2nd. (That pitch, unlike the Roe offering above, was a strike.) Here's how Roe's slider stacks up against the best breaking pitches in baseball this season:

While Roe's slider was amazing, it's not exactly the greatest horizontal breaker of all time. Looking at numbers from 2014 gives a glimpse into what a full season's worth of pitches might hold in terms of pitches that maximize horizontal break. Roe's 28.6-inch slider would've landed him sixth on the 2014 list, just behind a slider from Yu Darvish. To wit, here's a table of the 2014 top-five pitches, with Roe's 2015 offering added for context:

Now, all of these pitches had more horizontal movement than Roe's slider, regardless of your preference for the short- or long-form method of measuring movement. That said, none of them have the aesthetic appeal of Roe's offering.

Jesse Hahn sits atop the leaderboard with a sinker that moved nearly three feet. I'll repeat that for emphasis. THREE. FEET. That pitch, like so many from the previous post exploring sinkers in depth, doesn't look as impressive as Roe's, though:

Darvish's pitch has some of Roe's visual appeal, but the camera angle doesn't really do it justice:

A big part of the lack of visual appeal is probably that the batter is left-handed, so we don't get the full effect of the movement: It's breaking in on the hitter's hands.

The best contender of the bunch is probably Dan Jennings' slider, which has some of the Chaz Roe feel:

Jennings benefits from pitching to a same-handed hitter, but it's still missing that extra something that makes Roe's pitch so ridiculous to watch. He also has one of the best camera angles in baseball on his home broadcast, which helps enhance, or at least not detract from, our perception of the pitch.

Let's take a second to break down why Roe's pitch, and its 28.6 inches of horizontal movement, is so damn fun to watch. There are three main components to our perception of a pitch outside of the pitch's attributes themselves:

Camera Angle
Many camera angles undermine the beauty of pitches that break to the right (from our view on the couch). That's because of the common orientation of the cameras in MLB parks. Let's take Camden Yards and MASN as an example. (Note: The actual Roe pitch was captured in Toronto, but Camden Yards makes for an easier example, so we'll use it here.) In the Roe slider GIF, as with most cameras across MLB, the angle is slightly off-center toward left field. (A notable exception might be the Red Sox and NESN, whose camera appears to be slightly off toward right field.) In Camden Yards, the center field camera well is located adjacent to the Orioles' rooftop bar, as you can see below. The cameras are circled in red: 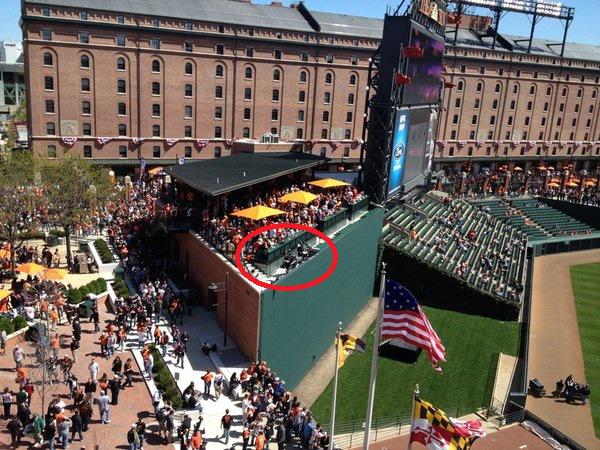 This placement causes the camera to be slightly askew, with the red line indicating the angle toward home: 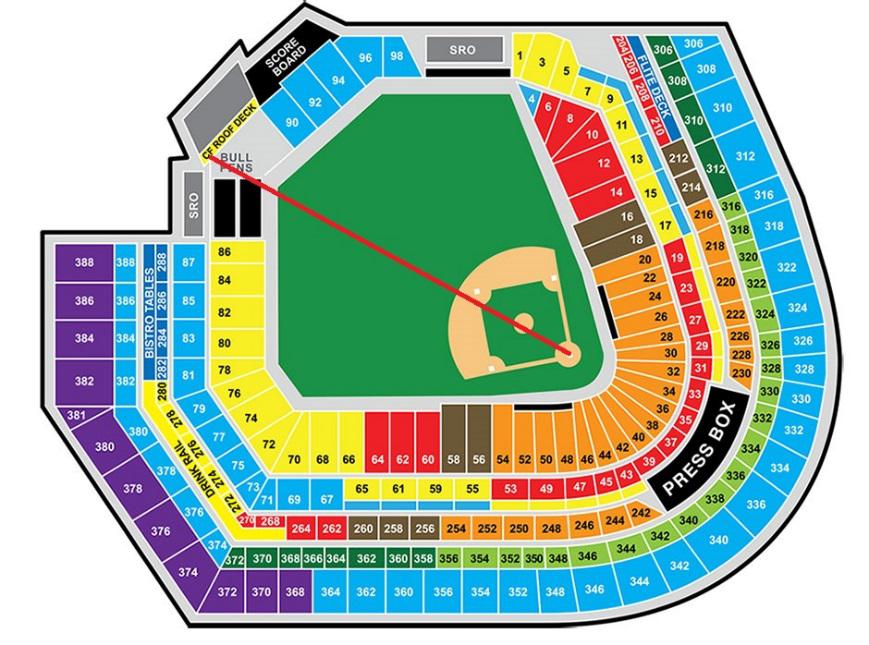 The Orioles and MASN have, if you believe Carson Cistulli, one of the better center field camera setups in baseball, but these few degrees off of center have a big impact. Pitches that move to the third-base side of the plate appear less impressive because they are moving toward the camera horizontally, while pitches that move to the first base side are moving away from the camera and thus look extra impressive.

Anchoring
Part of the reason Roe's slider seems so ridiculous is because of how Caleb Joseph reacts to the pitch. His glove appears to be squarely in the middle of the zone, but has to jerk his left arm over to the first base side to catch the pitch. The movement of the glove and subsequent pull of his entire upper body make the viewer think that even Joseph didn't expect the pitch to move quite that much. In reality, Roe likely just missed his spot—which is understandable when a pitch moves more than two feet—and Joseph was surprised at the location regardless of the movement.

Knowing that Joseph continues to be one of the best framing catchers in baseball should only serve to amplify the impact of having our perception anchored by the target he initially made for Roe. Ultimately, when the catcher sits off the plate where the pitch ends up, our perception is going to be that the offering was less impressive because the pitch did what the catcher expected it to. That doesn't mean it didn't have absurd movement; it just seems a lot less impressive than it perhaps ought to.

Batter Reaction
If Russell Martin simply watched the pitch sail away, we'd all be much less impressed. Instead, his half-swing – stutter step – twisted ankle – stumble really sells the movement of the pitch. If a professional hitter, and a good one at that, was so baffled by the pitch, then it must have been pretty amazing.

All in all, Chaz Roe did an impressive thing. The masterpiece that inspired this post featured more than double the normal movement of Roe's average slider, which resulted in a memorable reaction from Russell Martin. In the grand scheme of things, the pitch wasn't as impressive at it may have seemed at first blush, and it likely won't end the season as the no. 1 pitch in terms of horizontal movement. What it had was the perfect storm of circumstances amplifying its inherent aesthetic appeal. It wasn't like the Bard pitch in that nobody has thrown anything like it before or since. It is what it is, and what it is is a really fun pitch to watch.

You need to be logged in to comment. Login or Subscribe
roarke
All that and you didn't embed the gif or did I miss it?
Reply to roarke
isaak11
Just missed it. Top gif of the page.
Reply to isaak11
roarke
Not showing up for me. Work firewall must be blocking it. *grumble, grumble*
Reply to roarke
BSLJeffLong
Maybe this link will work better?

https://twitter.com/thepitcherlist/status/612417254031028224
Reply to BSLJeffLong
walrus0909
Any way you can bribe someone to get the Trackman spin rates for that pitch?

I feel like the direction of the spin is more of an outlier than the amount of the spin, but I'd love to know for sure.
Reply to walrus0909
stevedorsch
Roe's pitch happened in Toronto, not Baltimore.
Reply to stevedorsch
doctawojo
"(Note: The actual Roe pitch was captured in Toronto, but Camden Yards makes for an easier example, so we'll use it here.)"
Reply to doctawojo
Oleoay
I thought Kerry Wood threw a few frisbee sliders in his 20K game. One to Biggio I believe.
Reply to Oleoay