Thursday's Takeaway
Last night's Baltimore-Houston matchup looked to be a tough one for the struggling Orioles. Having suffered through five consecutive losses that saw their playoff odds drop from nearly 10 percent to just 5.8, it didn't look like their losing streak would end, as they had to face AL ERA leader Dallas Keuchel, who was coming off perhaps his best game of the season.

Despite this, the Orioles took an early lead on a Chris Davis RBI single. However, Buck Showalter tired of umpire Brian Gorman's wide strike zone, arguing after Keuchel's fifth strikeout in the second inning and getting himself ejected in the process.

Gorman was pretty true to his fairly large zone: 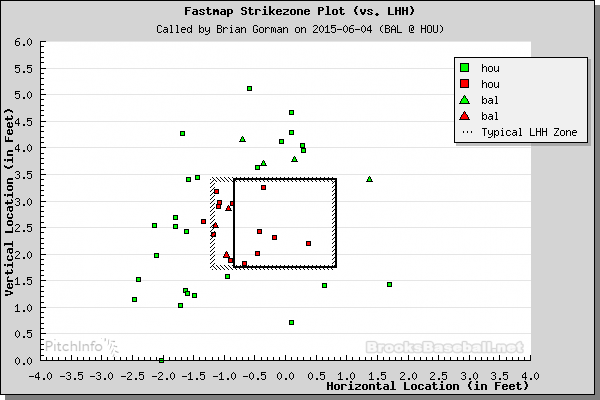 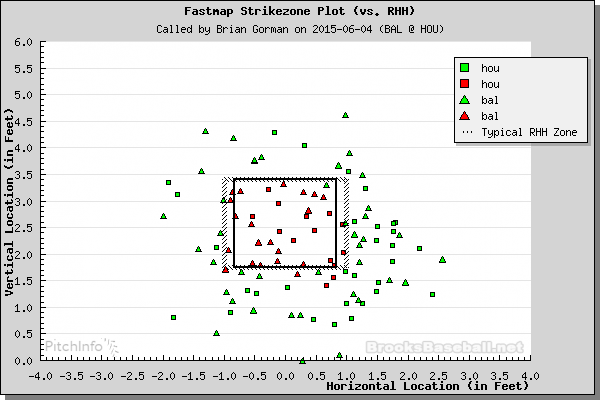 However, Gorman's zone from that point on would not favor Keuchel too much, as he only struck out two more batters in his next four innings. The lefty's outing of six innings, two runs, one walk, and seven strikeouts kept the Astros in the game but was nothing special. In fact, he was closely matched by his counterpart, Wei-Yin Chen, who struck out nine and also gave up two runs in 6 1/3 innings. According to Game Score, Chen slightly outpitched Keuchel, 62–58.

The Astros took the lead on a Hank Conger home run in the third and a Luis Valbuena sacrifice fly in the fourth, but the Orioles struck back on a Steve Pearce single to score Adam Jones. It would be Jones who, in the eighth inning, struck the home run that would give the Orioles the win.

Colby Rasmus attempted to reach base via drag bunt in the bottom of the ninth, but instead made the final out of the game. Rasmus is not known for his bunting skills, but it's not the first time we've heard about the timing of his bunts.

Quick Hits from Thursday
Should the Mets remain near the top of the NL East, these Cubs and Nationals games could take on significance in the Wild Card battle.

It appeared that the game would get quite ugly for the Nats' Gio Gonzalez early on, as he loaded the bases with no one out to begin the game. To make matters worse, Gonzalez then walked Junior Lake, and it appeared the struggling righty wouldn't be in much longer.

However, he straightened himself out, inducing a double-play ball from Starlin Castro. While another run scored on the play, Gonzalez retired the last batter of the inning, then rolled through five more innings, striking out six without allowing a run.

Besides a Bryce Harper RBI ground out, that would be all of the scoring for the game. It appeared that Addison Russell's ill-fated decision to steal home on a Gio Gonzalez pickoff to first base would be the game's worst baserunning play, but that would not be so, as the game ended with this "ross-some" play, which is also the

Carlos Rodon's young career as a starter has been up and down, and we got both yesterday right off the bat, as the 22-year-old allowed three straight baserunners to begin the game before striking the next three out swinging.

Rodon struck out an impressive 10 total over six innings while limiting the Rangers to the one run he permitted in the first inning. Rodon's control, which he has struggled with this season (six walks per nine), took a step back from his walk-free May 29th start, but the three free passes he issued were still an improvement compared to his usual.

The White Sox tied the game on a Gordon Beckham sacrifice fly to score Avisail Garcia, who had reached base on a throwing error by Joey Gallo. It was an ugly game in the field overall for the Rangers, who made four errors, padding their runner-up status, as only the Athletics have more.

The game remained scoreless for seven innings after Beckham's RBI, with both teams unable to convert opportunities. Despite ranking 24th and 28th, respectively, in team reliever FIP, the bullpens held, with the White Sox's Daniel Webb providing 2 2/3 innings of scoreless relief.

Finally, in the 11th inning, this happened:

The hit came off Dan Jennings, who entered the game sporting a 7.34 ERA. Jennings was chosen to pitch over David Robertson, who was available, according to Robin Ventura. Jennings, however, isn't as bad as his ERA dictates, and Ventura was understaffed, with Zach Duke and Jake Petricka having already pitched. Ventura has done his best to limit the number of high-leverage situations Jennings has pitched, but frankly, he doesn't have many other options: 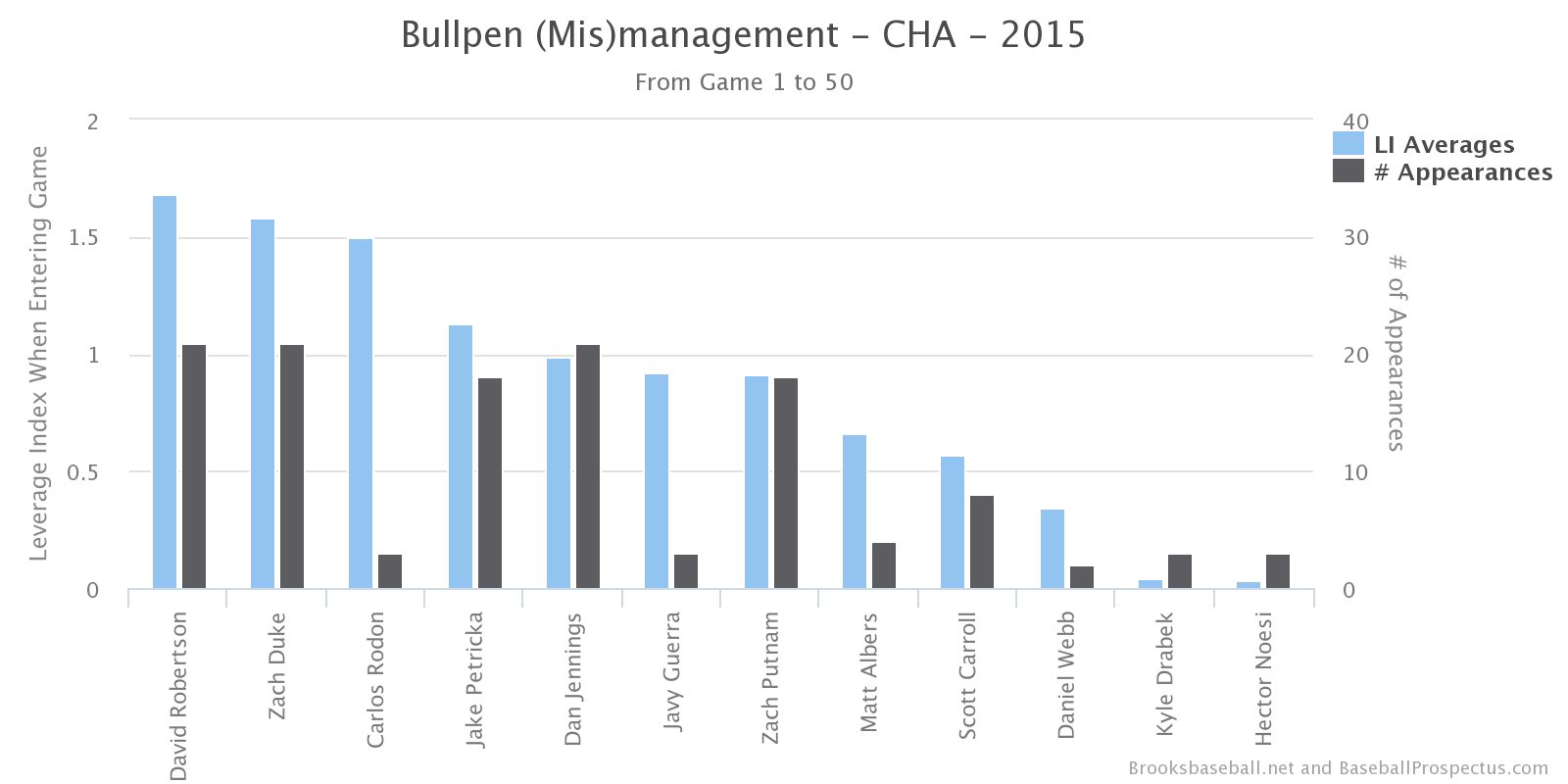 Still, some might argue that it's yet another instance of Dan Jennings being inserted into a role for which he isn't qualified.

What to Watch For
Coming off his 5 2/3-inning scoreless debut against the Red Sox, Chi Chi Gonzalez will be tested against the Royals, who possess the sixth-best TAv in baseball. Going up against him will be Edinson Volquez. Maybe this will be the game when Volquez's .262 BABIP over the past two years begins to nudge upwards a little bit. (8:10 PM ET)

Things have been spinning out of control in Detroit, as the Tigers have lost seven straight games. While you'll have to listen to Effectively Wild #689 and read this Matt Trueblood article to find out if the Twins are for real, the Royals certainly are, and both teams stand ahead of the enfeebled Tigers. It looks as if Detroit's four-year run in the AL Central could be coming to a close. They'll try to turn things around against Jose Quintana and the White Sox. (8:10 PM ET)