If Jake Odorizzi's 2014 established that a pitcher's fortune can change with his grip, then Odorizzi's 2015 is confirming improvement doesn't always arrive at once.

Odorizzi has been one of the game's best-performing starters through the season's first two months, according to BP's new pitcher WARP, derived from DRA. Odorizzi exited his most recent start ranked sixth in the majors, better than teammate Chris Archer, ex-teammate David Price, and Trevor Bauer—whom rumor holds the Rays were close to acquiring in a three-team trade for James Shields before later settling on the package that netted Odorizzi and … well, you know.

You also know the genesis of Odorizzi's transformation from rudimentary back-end starter with a few average pitches to possessor of a strikeout rate exceeding one per inning. The tweet-size version of the story goes like this: Odorizzi learned Alex Cobb's split-change, which became the key to his high-low style: fastballs at the letters, splitters at the knees. What you might not know is how Odorizzi's growth has carried into the new year, to the point where he's matured into a more productive and efficient pitcher.

Odorizzi's present surge resembles his 2014 ascent in a way. Both started when he harnessed a pitch. This go-around it's a slider or cutter, depending on the classifier. Brooks Baseball labels it a cutter, likely because of its mid-to-upper-80s velocity, while Odorizzi calls it a hybrid due to the increased speed. For this article's purpose, the pitch will be described as a slider, so as to reflect its employment. Put simply, Odorizzi throws the pitch exclusively down and away to righties: 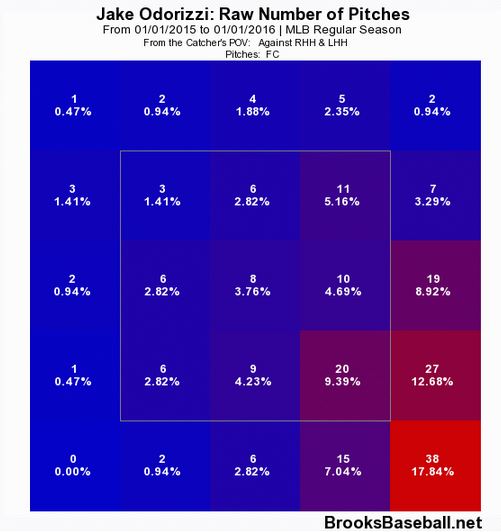 While Odorizzi's slider grades out around average, it plays up due to the location and the interplay between it and his low-to-mid-90s fastball and high-quality splitter. The most obvious benefit Odorizzi has gained from his slider's increased role is a decline in predictability. Odorizzi was a two-pitch pitcher throughout 2014, with his total pitches comprising more than 80 percent fastballs and splitters. He wasn't as straightforward with the platoon advantage, opting instead to throw his slider some 23 percent of the time. This season Odorizzi's slider usage is up to 20 percent overall and 42 percent versus righties, enough to make it his primary pitch.

Often the whole unpredictability thing yields inscrutable returns. Not in this case. Odorizzi's slider has aided him in a few ways. He exited Sunday's start with a 43 percent groundball rate, a seemingly trivial accomplishment, seeing as how he ranks 84th among the 109 pitchers with more than 50 innings. However, it's a marked improvement from 2014, when his 32 percent rate was the second worst among pitchers with triple-digit innings. In fact, Odorizzi's gain in groundball percentage is the second-biggest in baseball, trailing Texas' Nick Martinez by less than a percentage point. What does all that have to do with Odorizzi's slider? Turns out it's been his most effective pitch against righties when judged by the percentage of balls in play that were grounders. (The splitter reigns supreme in this category against left-handed batters, and therefore overall.)

Those sequencing and batted-ball profile differences have shepherded Odorizzi down a different route, but they aren't the only changes worth noting. Anyone who watched Odorizzi earlier in his career remembers how he was prone to long, grueling at-bats featuring a lot of spoiled offerings. Baseball-Reference tracks the percentage of a pitcher's strikes that were foul balls, and sure enough Odorizzi had the third-highest rate in 2014. This season, he's dropped into the high 40s. Take a look at the impact all of the above has had on Odorizzi's pitch-efficiency stats:

Barring an injury or collapse, Odorizzi has a legitimate chance to crack 200 innings for the first time. Fortunately, he used the offseason to work on his lower body and core conditioning, leading to improved body control and 17 additional pounds, though offseason weight gains are frequently specious. Whatever role the training has played, Odorizzi's dedication to reinventing himself the past two winters is admirable.

Of course there are some other aspects of Odorizzi's season to address, like the role of Tampa Bay's defense in his success, and the sustainability of his progress.

You would expect the Rays' defense to be weaker than usual, given how much time James Loney has missed and the continued employment of Asdrubal Cabrera at shortstop (who, admittedly, has been more competent there than anticipated), but that hasn't been the case. Instead the Rays left Baltimore on Sunday ranked first in raw and park-adjusted defensive efficiency, turning nearly 74 percent of balls in play into outs. Between the quality defenders stationed almost everywhere on the diamond and Kevin Cash's commitment to the extreme shifting ways of the past regime, perhaps Tampa Bay's continued defensive excellence shouldn't be surprising.

Nor should it shock anyone that Odorizzi has benefited from that good glove work behind him; even among Rays starters, Odorizzi's BABIP checks in as the second lowest. As a result, the race is on to predict that his 2.61 ERA is likely to inflate. There's no prize to be had there—most pitchers with a 2.61 ERA entering June will lose the fight to maintain it—but the changes Odorizzi has made to his game suggest he has a good shot at outperforming PECOTA's 3.79 projection heading forward.

Whether Odorizzi's new features and heightened performance level will be enough to help the Rays reach the postseason is anyone's guess. Odorizzi should remain a bright spot no matter how things work out on a team level, as well an example that sometimes players can exceed expectations, even if they hardly resemble their old selves.