Carlos Quentin is the victim of the modern MLB roster, and he helps explain the offensive famine that has so starved us all for runs over the past five years. The Padres and Braves traded some bad contracts in order to balance out the Craig Kimbrel-for-prospects deal they struck on Sunday night, and Quentin was one of the spare parts rather casually tossed into the bed of the truck heading from San Diego to Atlanta. On Monday, Atlanta designated Quentin for assignment, an expected move that amounts to an admission: Quentin has negative value to both of the teams involved in this deal. His contract is simply a sunk cost, and the Padres got the Braves to pay what’s left of it. Quentin will, in all likelihood, hit the waiver wire during the next few days, and someone might claim him—though truthfully, I see only one promising fit, in Toronto, where Quentin could take Justin Smoak’s place as a bench bat, occasional first baseman and DH.

That’s actually a really good fit, though, and you know what? Five or 10 years ago, there would have been five other teams in a similarly good position to snatch up Quentin. He might even have had some asset value for Atlanta, instead of being waiver-wire fodder. That’s because, back then, teams were teetering between 11 and 12 pitchers on their rosters, instead of between 12 and 13. Go back 15 or 20 years, to the dimmest of my firsthand baseball memories, and you could find teams carrying as few as 10 pitchers on more days than not. In that era, Quentin—whose injury problems have derailed his career, but who remains a very good hitter, and whom PECOTA projects to post a .296 True Average this season—would have fit gorgeously onto any team’s bench. Every team could find room for a hitter of his abilities, even if he couldn’t be counted on to start.

To be clear, he can’t be: Quentin has averaged 76 games per season since 2012, hitting the DL four times, twice for problems with each knee. He doesn’t have a position. He can’t field adequately anywhere, and he can’t stay healthy when he tries. He’s only 32, and there’s plenty left in the bat, but if he never puts on a glove again, he’ll be worth more to someone than he will be if he does. His smaller-than-average platoon split over the last three years defies the notion that he fits best in a platoon role. He needs to play part-time, but he can do it against almost anyone. Still, he’s an albatross. Despite a 10th-percentile TAv projection—his more or less worst-case scenario—of .252, Quentin’s career is on life support.

The reason is that teams are so loaded with relievers that their bench spots all need to go to versatile players who can play a premium defensive position. You get a backup catcher, a fourth outfielder (who had better be able to play center), a utility infielder (who had better be able to play shortstop), and one other guy—maybe two, if you’re in the National League and carry “only” 12 arms. Teams are exceptionally wary of finding themselves shorthanded, which makes them reticent to give jobs to players who stand mostly to come off the bench (the professional pinch-hitter is dead, to the chagrin of Lenny Harris and Matt Stairs) and who lack durability. In 2001, 28 players who batted at least 100 times made at least 50 percent of their appearances as pinch-hitters. That’s an historical outlier, but as recently as 2007, the number was 19. From 1996 through 2008, there were never fewer than 15 such players. In 2014, there were only 13. (Only two of these pinch-hit specialists had league-average or better OPSes last year, marking the first time there have been so few since 1988.)

Nor are pinch-hitters used as judiciously as they used to be. Here are the average Leverage Indices of pinch-hit plate appearances for five selected seasons, league-wide:

Blessedly, managers seem to have found a practical minimum, a floor below which they can’t reasonably let an opportunity to pinch-hit go by. Still, benches aren’t what they were. Maybe that’s the way it should be, but I doubt it. I don’t see markedly more useful players on most MLB benches, getting semi-regular playing time to counteract the effects of The Grind on a team’s everyday players. It seems to me that shorter benches are not only forcing teams to keep poor players who can be emergency stopgaps in multiple positions, but are making managers gun-shy about calling on a bench player even when the situation begs for it. 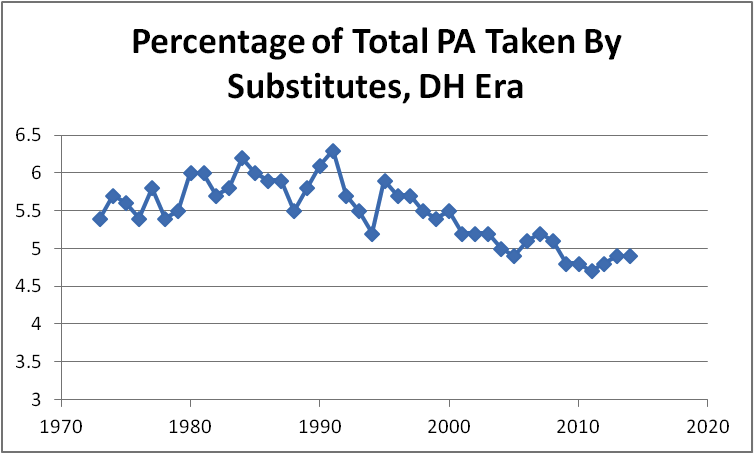 I have an ever-shifting estimate of the relative weight that should be assigned to various factors, when trying to explain the offensive downturn over the last six years. Here’s where I land today:

This is, with the exception of the research linked above on the strike zone’s impact, purely guesswork. Still, I feel pretty good about it, and if it’s even close to true—if the loss of Quentin and his ilk in the name of keeping more Darwin Barneys around is a greater culprit in runs lost than even The Shift or PITCHf/x are—then there’s a competitive advantage waiting for the first team to remember how to survive without the seventh arm in their bullpen.