As Effectively Wild listeners know, each email episode includes a statistical query that I do using Baseball-Reference's Play Index tool. Sometimes the results are easier to see than to read, like this week's, so here's a companion article about the search. The question was: Who, since 2000, has thrown the fewest pitches per start in a season?

One answer is Chris Jakubauskas, who threw 12 pitches in his only start in 2010. The 12th, to Lance Berkman, ended up on Jakubauskas' face (then all the way back to the backstop), and he missed two months recovering. It's a stupid-scary highlight video and you shouldn't watch it.

He didn't often make it out of the fifth inning.

This is all going somewhere, promise. So, Lima demonstrates something that is quickly pretty clear looking at these things: Low pitch counts are one of those things that are good and admirable but ultimately correlate to sucking. Sort of the inverse of the runners left on base thing. Announcers will never tire of knocking the team that leaves a lot of runners on base. The team that leaves the most runners on base usually wins. Similarly, announcers will praise the pitcher with a low pitch count, as they should. But the pitcher who throws the fewest pitches usually loses. (I'm not sure these examples are actually analogous.)

This is what that looks like, in bubble form: 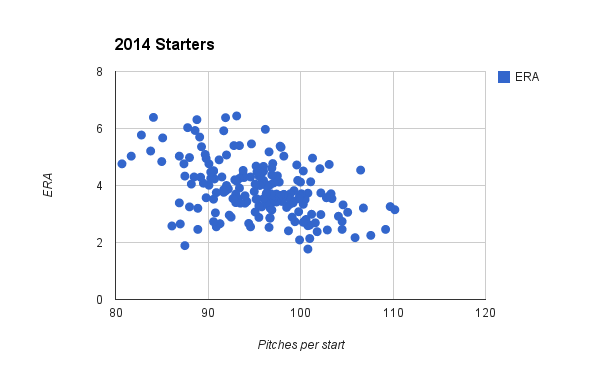 The exceptions are easily explained. Justin Verlander's bubble is easy to spot, high and to the right–clearly, his horse reputation (and, perhaps, his still-decent FIP) earned him long leashes even as he allowed more runs than anybody on his staff. Michael Pineda's is easy, too, as he wasn't allowed to throw 100 pitches in a game until September (or 110 in a game at all) despite the AL's only sub-2 ERA. In both cases, they're exceptions that prove the rule: If Verlander had been better, he would have thrown even more pitches per start, quite possibly leading the league, as he did in 2010, 2011, and 2012. If Pineda had been worse, he probably would have thrown fewer. Kershaw, the other sub-2 ERA, might also have been further to the right except that baseball games end after nine innings. One suspects he had more than 97 pitches in him on Aug. 16th, but the game was over.

Which takes us to the exception that disproves the rule, and the destination I've been working toward: Greg Maddux. If you were to look at the 200 lowest Pitch/Start seasons since 2000, the list that Jose Lima "tops," you'd find mostly terrible ERAs, a couple young kids treated cautiously, and a lot of Greg Maddux. Five of the top 75 seasons belong to him, and in most he was quite good. (All five of those seasons are in the top 35 ERAs of the group.) And this distinction between Greg Maddux and everybody else who finds their way onto this list is best summed up thusly:

You need to be logged in to comment. Login or Subscribe
mjpals
Fun fact: the phrase "the exception proves the rule" doesn't mean what you (or most people) think it means. The word "prove" actually used to mean "to test" rather than "to confirm", and the phrase was coined using that antiquated definition. (This is also where we get "proving ground" and "the proof is in the pudding".)
Reply to mjpals
lyricalkiller
Whoa. This is going to be all I think about today.
Reply to lyricalkiller