At-bats are baseball’s fundamental building blocks. Good at-bats make for good games. Ninety percent of the suspense and rising action in baseball lives in the episodic unfolding of a plate appearance. Of course, not all plate appearances are created equal. In fact, it’s a pretty radical time in MLB history, in terms of the anatomy of a trip to the plate. On Friday, I wrote a piece that explored the surprising way the Twins attack the first pitch—or rather, don’t. Today, I want to dig more into at-bats, from beginning to end, to see how their inner workings are different than they were 25 years ago—or 20, or 10, or even five.

First, let’s revisit what happens right away. The first pitch is a high-leverage offering. In fact, what happens on that pitch has never mattered more. In 2014, batters hit .336/.341/.526 on the first pitch. If you’re unfamiliar with how these things work, maybe that sounds terrific. It’s not. Of the 27 seasons for which we have data, that .867 OPS ranks 16th. Compare it to the overall league run environment, though, and it positively shines. 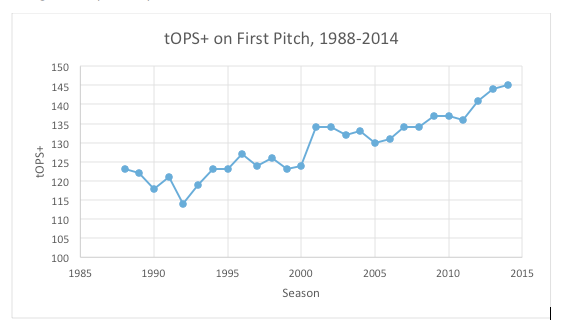 That shouldn’t surprise us. One reason for the drop in run scoring over the past half-decade is the soaring strikeout rate, and you can’t strike out on the first pitch. When you’re watching a game, know that the first pitch is an opportunity for the offense.

It’s an opportunity they can ill afford to miss, too. Forget production relative to the league norm. Absolute production is endangered (to the tune of a sub-.600 OPS) as soon as the pitcher gets ahead 0-1. 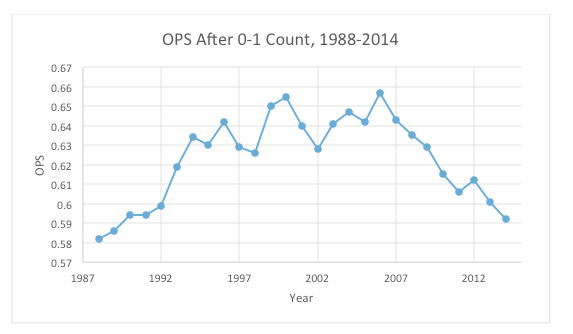 Of course, putting the ball in play on the first pitch (a good thing) requires swinging, which puts one at risk of falling behind (a bad thing). What if one takes the first pitch, as the Twins do so often? That same piece from Friday showed that pitchers are throwing so many first strikes that taking is a worse strategy than ever. Only 39.3 percent of all plate appearances went to a 1-0 count in 2014, the second-lowest rate on record. And when they did get there, players only had a .792 OPS the rest of the at-bat, a 20-year low. 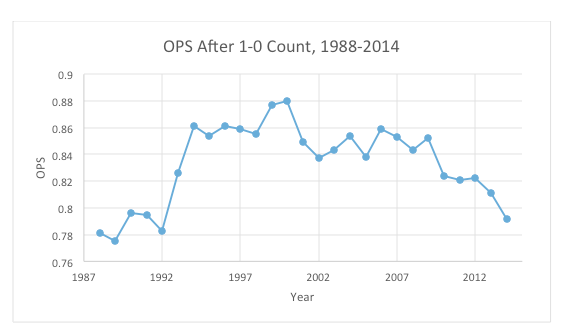 Now, the shapes of the two graphs above aren’t all that different. The relationship between a 1-0 count and an 0-1 count is not much different today than it was 10 or 15 years ago. Both expected OPS figures are just lower, because after that first pitch, more at-bats overally proceed in the wrong direction for a hitter than they did in the past. Relative to overall production, falling behind 0-1 isn’t a more costly problem than it used to be.

Part of that, however, is the fact that falling behind 0-1 is more common than it used to be. Another part is that, once 0-1 happens, batters are getting more defensive and swing-happy, and that’s leading to more 0-2 holes out of which to work.

In only about every ninth plate appearance was the first pitch the deciding one. So what happens on the second pitch? As you might imagine, it depends on how the first pitch went.

If the batter took a 1-0 edge on the first offering, the second one determines whether he becomes nearly an even-money bet to reach base, or whether he plummets back down to a place worse off than when the at-bat began. About 17 percent of all 1-0 pitches resolved the at-bat, and those that did generally ended well for the offense (.331/.330/.536 was the aggregate line). Another 33 percent brought the count to 2-0. That means that in roughly half of all 1-0 counts last year, the batter let his opponent get back into the count, either by swinging and missing, by fouling a pitch off or by taking a strike. Here’s a chart (clipped from the bottom of the full list of seasons) showing what we’re saying: 2-0 counts are rarer than they’ve ever been.

In general, it’s been good advice for the batter in a 1-0 count to stay patient. We hear commentators talk all the time about how getting ahead allows a hitter to shrink his strike zone, gear up for a certain pitch and let all others pass, that kind of thing. It’s sound logic. These days, though, that first strike is dangerous. It seems that, unless 2015 brings a sharp reversal of recent trends, the best advice to hitters is to be aggressive early in the count. Waiting on pitchers to get themselves in trouble is only getting batters into holes from which there’s no longer good escape. 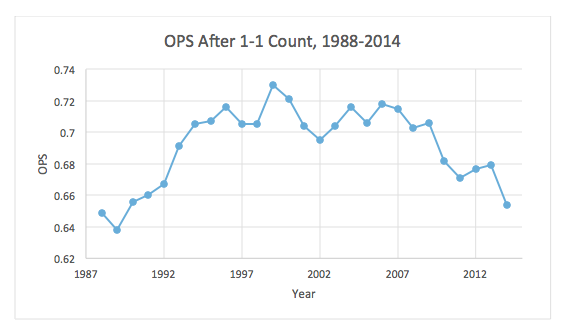 When I say that that first strike is a tough hole out of which to dig, I mean it. After even reaching a 1-1 count, an average batter in 2014 could expect to strike out a quarter of the time. As recently as 2005, that number was more like 21 percent, and it was a whole lot more livable. 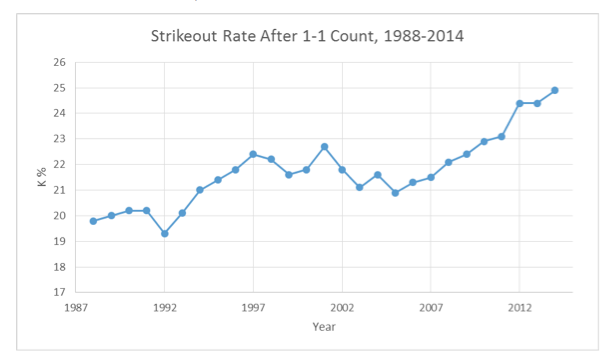 This is why we see more hitters swinging away down 0-1. The ever-growing strike zone puts them in considerable danger of falling down 0-2 even if they take that pitch, but more importantly, they’re still fighting their way out of a corner if the count does even out. There’s too little to gain by trying to get to 1-1, and too slim chances of getting to any more favorable count to discourage those swings. Unless the strike zone really does get smaller in 2015, batters should continue to take an historically aggressive approach to 0-1 pitches.

The answer is 33.0 percent, and for what it’s worth, that’s the smallest share of plate appearances that have ever ended under those circumstances. 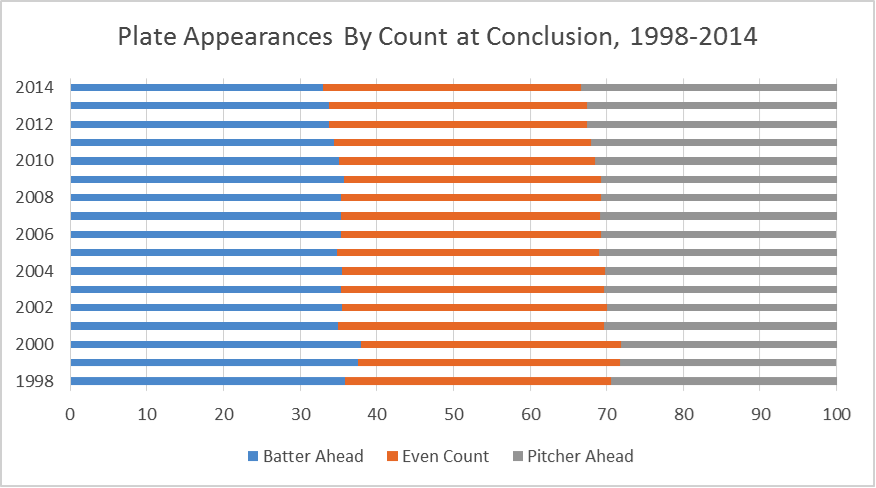 More at-bats are ending with the count in the pitcher’s favor, which is having precisely the effect you would think on league-wide offense.

Here are the overall league batting lines for 1988 (the first year for which we have data on the count), 2014, and 2001 (halfway between the two), along with the lines for only those plate appearances that ended with the batter ahead:

There’s no question that being ahead in the count is more important to today’s batter than it has ever been before. (In another way of viewing it, it takes a worse pitcher than ever to fall behind on a batter, so those situations simply have higher expected production.) Batters are doing more with less, because they have to do so. They’re facing two-strike counts more often than ever, and they’re more vulnerable to striking out once they get there than ever. If they don’t make hay on the rare occasions when they get the jump on an opponent, they’re lost. 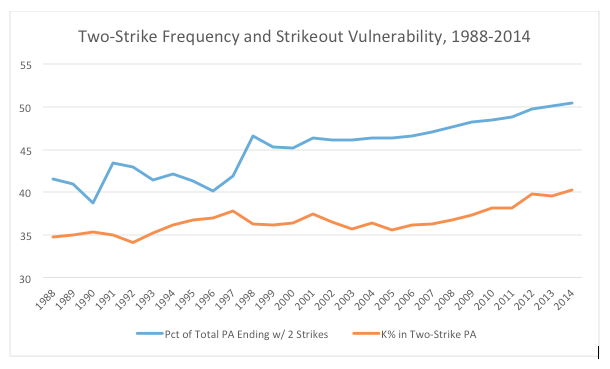 I think this kind of urgency, this sense that the batter is racing the clock from the moment he enters the batter’s box, makes for bad at-bats. The only good solution, though, is for some fundamental change to come to the game, something that will restore a hitter’s ability to assert control of the count at times. For my money, that ought to be automated umpiring, or at least, a codified shrinking of the strike zone. I have no doubt that today’s pitchers have the best control of any set of pitchers in baseball history, and I get that batters swung at a higher rate in 2014 than they had since 1990. Still, the league’s aggregate walk rate last season was the lowest since 1968, and second-lowest since the Dead Ball Era. When 1968 comes up, something has gone wrong, and needs to be fixed.

In the meantime, there are teams and individuals taking unique approaches to this problem, and we should continue to watch them, to see if any bear any particular fruit. The Astros (extremely aggressive early in counts, extremely passive late in counts) seem to be buying into the trend arrows. They want their hitters stepping into the box ready to rip the first good pitch they see, and if one doesn’t come early, they want their guys waiting hurlers out, hoping those pitchers will let them get back into the at-bat. Other teams are more inclined to try to get their batters ahead first, and then cut them loose.

Ultimately, most differences in expected outcomes in baseball are very, very small. We talk about lineup construction and bullpen optimization until we’re blue in the face, but the expected changes in runs scored or games won based on the changes going on in those arenas are minute. What we fail to see, sometimes, is that the smallest waves of change can have the biggest consequences. The leverage of the count is just one example, but it might be the best one. Each pitch (especially early in the count) wildly swings what we ought to expect out of an at-bat, but we’re too busy viewing the at-bat as the single event between the one before it and the one after to take notice.

You need to be logged in to comment. Login or Subscribe
newsense
Insanely good article. Should be up for an award
Reply to newsense
pizzacutter
Second.
Reply to pizzacutter
Ifrazer
"...and you can't strike out on the first pitch." We'll see what Joey Gallo has to say about that...
Reply to Ifrazer
yadenr
Gem of an article.
Reply to yadenr
muggers
Mike Trout may have been presented with this info. He recently said he's going to stop taking so many first pitches.
Reply to muggers
mlbbug
Must agree with the data presented in this article. It's pretty clear that unless something is done to bring the strike zone back to where MLB intended it to be that offense will continue to decline and the game itself will be at risk.The average Joe isn't interested in inning after inning of three up and three down. Let's see if the new Commissioner does anything proactively to address this situation.
Reply to mlbbug
sbnirish77
Matt, congrats on another great article. BP at its best.
Reply to sbnirish77
jfranco77
Really good article. I would have liked to see all the charts use tOPS or OPS+ though... just because I suspect that the OPS chart for every count looks a lot like that "after 0-1 count" chart.
Reply to jfranco77
myshkin
Along with everything else, I applaud the visual presentation of the graphs, especially the choice of color and line weight.
Reply to myshkin
matrueblood
I work on that stuff much more than I feel like I should. So thanks very much.
Reply to matrueblood
Dvdaughtry
While interesting to see it on paper, this sounds like hitting 101.
Reply to Dvdaughtry