With spring training games finally underway, we’ve gotten to the time of the year when the majority of baseball news has been about position battles, “best shape of his life” reports and the unfortunate and inevitable injuries that have left the Twitter world broken-hearted. However, this year poses the unusual situation of a potential impact player becoming available in March with Cuban infielder Hector Olivera finally being declared a free agent by Major League Baseball last Friday. Over the past week, quite a few developments have occurred in the bidding for the 29-year-old.

First, Jeff Passan of Yahoo! Sports reported last Thursday that there was concern that Olivera had a damaged ulnar collateral ligament in his throwing arm. That report was shot down by Olivera’s representatives immediately and Olivera had reportedly taken physicals for a number of teams in the Dominican in recent weeks. However, the team that ends up signing Olivera will have the opportunity to fly him to the U.S. for a physical that they will be able to conduct under the supervision of their own doctors and facilities before finalizing the official terms of the contract.

Kiley McDaniel pointed out in an extensive piece about the Olivera market that the Yahoo! report gives teams “even more license to project a possible future health problem, and use that to squeeze the contract total lower” as in the case with the Astros and Brady Aiken last summer or the Phillies and Miguel Alfredo Gonzalez in 2013. Previous concerns regarding Olivera’s health and ability to play the field every day only hurt Olivera’s leverage.

Soon after Olivera was declared a free agent on Friday, Ken Rosenthal of FOX Sports reported that Olivera’s representatives were telling clubs that they were expecting the final contract for the infielder to exceed $70 million. McDaniel reported in the aforementioned FanGraphs post that that Olivera’s camp was “disappointed with the early bidding.” He further speculated that Rudy Santin, Olivera’s trainer and representative running contract negotiations, had been using the media to try to drive up Olivera’s price but that there was no actual market for the $70 million figure that Santin had been pushing.

On Tuesday, Olivera fired Santin and replaced him with agent Greg Genske of the Legacy Agency, which prompted interest from a handful of teams who previously hadn’t been considered to be in the running, per Jesse Sanchez of MLB.com. The Dodgers have been considered one of the front-runners to sign Olivera for a while but the Braves, Marlins, Giants and Athletics have all recently been named in various reports to be in the mix as well.

But the Padres, who have spent the offseason completely revamping their roster, are “positioning themselves as a favorite” to acquire Olivera, writes Passan. One source told Passan that the Padres are considering an offer upwards of $50 million. Such an aggressive offer would presumably take Oakland and Atlanta out of the running.

Given what has transpired this offseason, it hardly comes as a surprise that the A.J. Preller regime is making a last-minute effort to lock up the final available high-profile free agent of this offseason. After all the moves that have been made this winter by San Diego, the most glaring weaknesses remaining on the roster are in the infield. Olivera has the flexibility of playing either second base or third base and would likely displace the tandem of Will Middlebrooks and Yangervis Solarte at the hot corner should he choose to make his home in San Diego.

Ultimately, the Dodgers have the financial muscle to flex if they really want and Olivera’s destination likely hinges on whether Andrew Friedman and Farhan Zaidi decide that the 29-year-old is worth investing in given the number of question marks surrounding him. The value added by Olivera this season is smaller for the Dodgers than most teams in position to sign him given the marginal upgrade that he would serve over Juan Uribe at third base and that the club is already the overwhelming favorites to win the NL West. On the other hand, Olivera could be a sizable upgrade at third base for the Padres, whose chances at claiming a wild card spot could swing significantly if Olivera is able to make the immediate impact that scouts expect.

If the Dodgers do decide to pony up for Olivera it would ameliorate the impending departures in their infield beyond 2015 but if they decide to stand pat for the time being, Preller could be on his way to swooping in on yet another big-ticket acquisition.

Jimmy Nelson working a curveball into his repertoire

Brewers right-hander Jimmy Nelson worked primarily as a two-pitch hurler during his two-month stint with the big league club last season, relying on a mid-90s fastball and a slider that flashed legit swing-and-miss stuff over 96 percent of the time. Nelson’s bread and butter was his hard two-seamer that helped him coax groundballs at an above-average rate while his slider ranked 10th in baseball in whiff rate among sliders thrown at least 200 times in 2014. He occasionally worked in a changeup to left-handed hitters but his lack of a quality third offering allowed hitters to get their timing down after a couple looks at him. 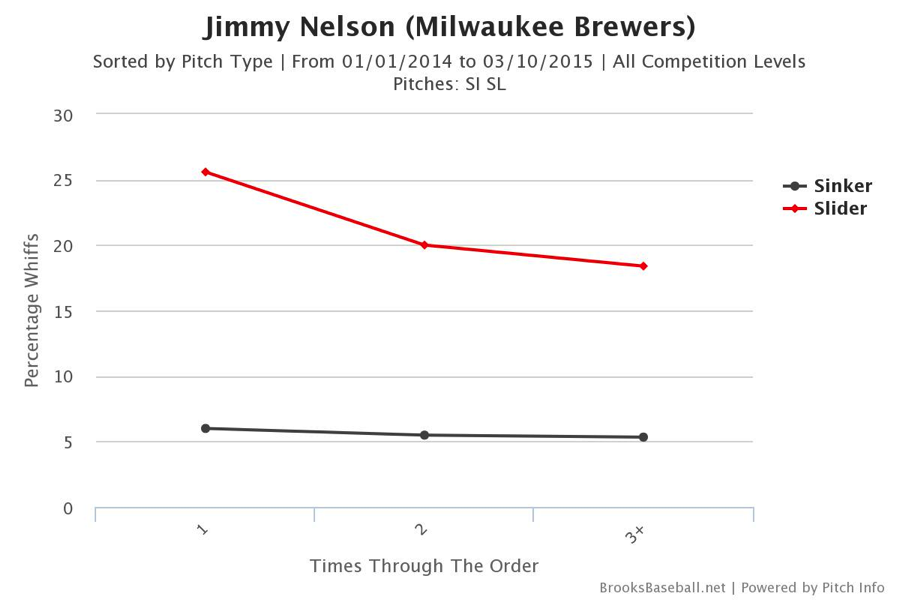 With just two primary velocity bands that hitters had to anticipate, Nelson’s slider generated fewer empty swings the second and third times through the order. With that in mind the 25-year-old spent the offseason working a curveball into his repertoire, a pitch that he learned three years ago from fellow Brewers prospect Hiram Burgos, writes Adam McCalvey of MLB.com. Nelson debuted the offering in his first start of the spring on Monday, working “three or four” curveballs in against the Royals.

After the outing, Nelson showed the grip of his new pitch off to McCalvey, revealing a spike curveball grip: 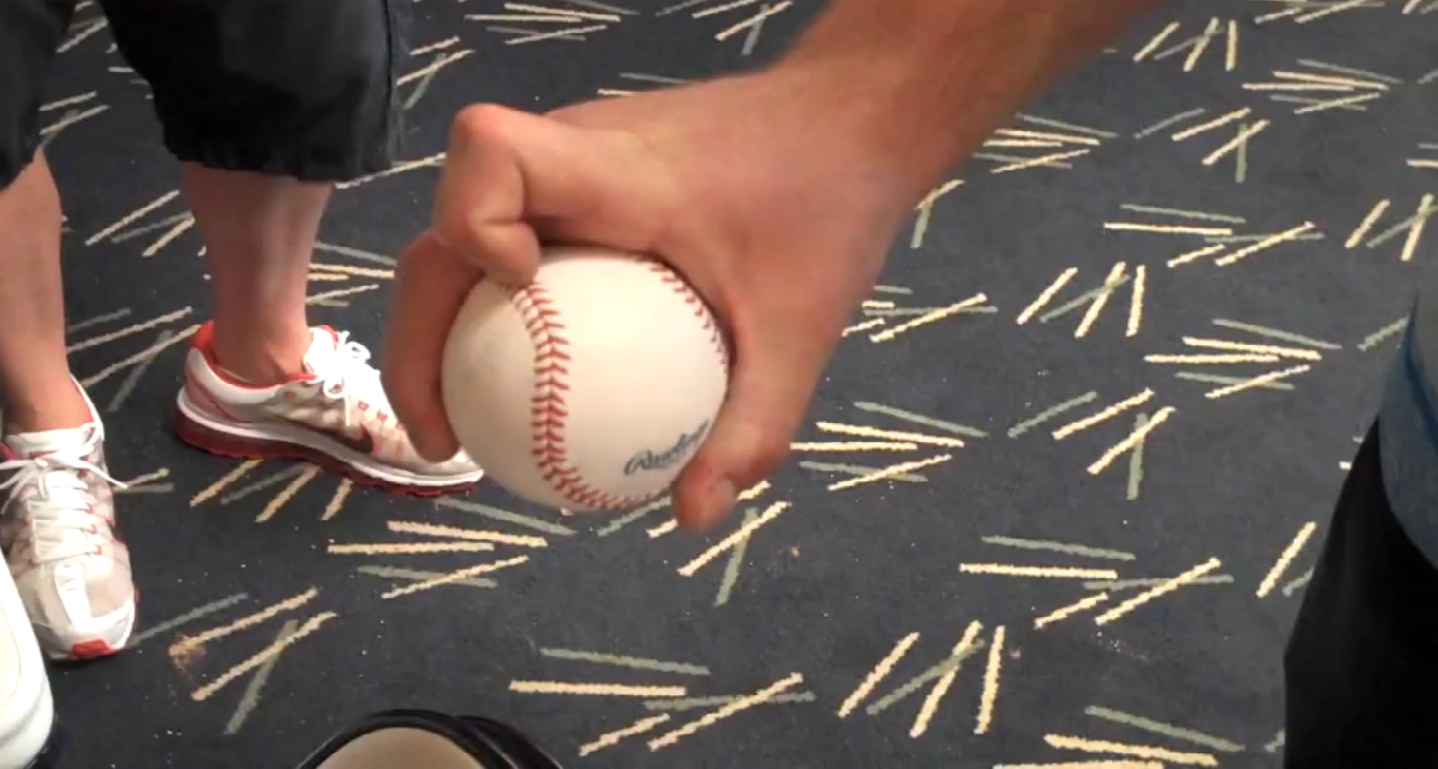 One advantage that Nelson offered about his curveball grip is that he’ll be able to maintain two distinct grips for his two breaking pitches. Nelson noted that sometimes traditional slider and curve grips can be similar and that they can eventually merge into a single slurve-like offering. Unlike his slider, which serves as an out pitch, Nelson told McCalvey that he plans on using his curve to disrupt opposing hitters’ timing and hopes that it will help him set up his other pitches.

It’s not yet clear how frequently Nelson plans on using his curve once the regular season begins but its addition to his repertoire shouldn’t signal the end of his changeup as a potential offering to equalize left-handed bats. The changeup has always lagged behind his other two offerings, which helps explain a career minor-league lefty-righty OPS split of 95 points with over 1,200 plate appearances against hitters of each handedness. However, Nelson told McCalvey that even with the new curveball he intends on using his changeup even more this season. If he’s encouraged enough by the progress of his newest toy by the end of spring, Nelson should have four offerings at his disposal to keep left-handed batters guessing this season.

I'm not sure why I find this typo so funny, but I do. Especially since fifty bucks would put Oakland and Atlanta out of the running.
Reply to roarke
alwaxman
You're not alone, as a Mets fan I read that line and thought to myself that the Wilpons can't afford the $50 to sign him.

Reply to alwaxman
JohnnyFive
I have a hunch why you might have found it so funny. That's because it IS so funny. I laughed out loud when I read that, much to the dismay of my co-workers.
Reply to JohnnyFive
cmosch
Ha, my mistake. It's been fixed.
Reply to cmosch