Pitcher breakouts are one of the most exciting aspects of each baseball season, but it’s hard to get riled up about them until we have a healthy chunk of the season in the rearview mirror. The halfway mark of the 2014 campaign has revealed a handful of players who have made great leaps in terms of value, both to their teams and on the stat sheet. Two of those pitchers are particularly intriguing. The Indians’ Corey Kluber and the Angels’ Garrett Richards have ascended to a higher plane of pitching performance this season, so let's dig into the components of each player's improvement.

Kluber has turned in stingy walk rates for each of the past two seasons, walking around two batters per nine innings, but his other numbers have shot through the roof in 2014. He has already exceeded last season's strikeout total despite having pitched 21 fewer innings (and faced 92 fewer hitters), he's giving up less hard contact, and his hit rate looks even more exceptional when you consider that the Indians rank 28th in the majors in defensive efficiency this season.

Everything Kluber throws falls within a narrow range of velocity, and more than 80 percent of his offerings are fastball variations with late movement that keep batters guessing. The cutter is a key part of his arsenal, with a late dive on a tilted plane that follows a different trajectory than his sinker. The raw velo has been on an upward trend over the past few seasons, allowing his plethora of fastball variations to play up as they dart in different directions late in the flight path.

Just about everything that Kluber throws has movement, thanks to his ability to add cut, arm-side run, or sink to the pitch's flight path. His put-away pitch is a slider that can be devastating, leaving his hand on a fastball trajectory before exploding off of the flight line. He follows a relatively predictable pattern by pocketing the pitch until the count is in his favor, yet opposing batters have flailed to the tune of a .080 average and an isolated power of just .027 in the 113 plate appearances that have ended on the slider this season.

To the listeners of TINSTAAPP or the readers of the Starting Pitcher Guide, it’s no secret that I’m a big admirer of Kluber's delivery. He brings a harmony of stability and power, with plus marks in every category of his mechanical report card. The overall package is one of the best in the game, with an “A-” grade that puts him in elite company; just nine of the 200-plus pitchers who received grades in the 2014 SP Guide achieved a mark of A- or higher.

Kluber gets the power started early, with a strong first move that leads with the hip as he generates energy toward the target. He has a smooth transition during the lift phase and shifts into second gear with an extra burst of acceleration, utilizing the lower half to drive his stride straight at the plate. He’s done an excellent job with the consistency of that momentum this season, rebelling against the common assumption that a slower pace is easier to repeat. Kluber produces excellent torque with a healthy combination of upper-body load and delayed trunk rotation to produce a generous amount of hip-shoulder separation when he lines up all the gears (which happens often).

The right-hander remains stable as kinetic energy surges through the system. He maintains balance in all three planes, with a nominal drop to his center-of-gravity and minimal movement in the lateral directions, culminating in near-perfect posture that spikes to a “70” grade at release point. His mechanics were incredibly strong prior to this season, and he has smoothed the edges to up the ante of repeatability and more often find his ideal release point; his statistical boost may not be tied directly to a change in mechanics, but his cyborg delivery made his breakout possible.

Richards pitched 30 games out of the bullpen in 2013, his first extended stretch as a reliever in his pro career, but he has slotted into the starter role this season with eye-opening results. His K rate has climbed more than 50 percent compared to last season, while opposing batters have come up empty when they have made contact. The hit rate is exceptionally low, implying some assistance from lady luck while also speaking to the difficulty that batters are having in squaring up his stuff. The right-hander is on a dominant run since the calendar flipped to June, rattling off seven starts of 1.45 ERA baseball with a K-to-walk ratio of 55:14 across 49.7 innings of work. His minor-league walk rates paint the picture of a control artist, but the other aspects of his profile cast a shadow of doubt over his ability to replicate those numbers at the highest level.

Some marked similarities between Kluber and Richards appear when we break down their respective arsenals. They each utilize a fastball-heavy repertoire, dialing the heater up to the mid-90s on average, but Richards has more than a 2.5-mph edge and has tacked on a tick-and-a-half since last season, which is made even more impressive by the fact that he was pitching in shorter bursts out of the bullpen in 2013. He gets good tailing movement on the sinker, and its velocity is enough to generate empty swings when the pitch gets away from him.

Richards and Kluber also share a weapon of choice when a strikeout is in order: the slider. Richards' slide has been even more dominant this season, holding opponents to a .150 average and .018 isolated power when it finishes an at-bat. His sequencing with the pitch has been less predictable this year, with Richards mixing in sliders even when behind in the count and injecting an extra dose of fastballs when he gets to two strikes. He works out of the strike zone with his slider, tempting hitters to chase with buried pitches that dart away from right-handed batters. 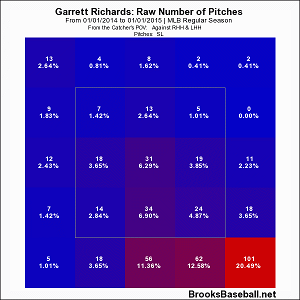 Richards has basically been a two-pitch hurler this season, pumping fastballs and sliders on more than 93 percent of his pitches. However, he occasionally breaks off a slow curveball that has the ability to turn an opposing hitter into a deer in headlights. Note that the release point of his curve is a couple of inches higher than those of his other pitches, with a horizontal position that is displaced by a couple of inches to the glove-side on average; the data indicates that he has a tendency to exaggerate the spine-tilt on his curve in an effort to exaggerate the over-the-top arm slot. The trend has not had any negative impact in term of effectiveness, though, as opposing batters are just 1-for-26 against the curve with 13 strikeouts.

Whereas I was glowing about Kluber coming into the 2014 season, my opinion of Richards was just as far to the other side of the scale. I gave him a “D” grade in the SP Guide, and his highly volatile mechanics fueled my doubt that he could withstand season-long exposure in a big-league rotation, let alone thrive in one. His delivery is still a red flag, but his wipeout arsenal has demonstrated the maxim that raw stuff can survive in the face of sketchy mechanics.

The main knock on Richards is his lack of stability in the delivery, with non-passing grades in both balance and posture. He tucks into max leg lift, particularly from the windup, and he remains imbalanced by hunching over toward third base during the stride phase, though the degree of his front-side bend is inconsistent. The balance has taken a small step in the right direction this season, downsizing the degree of movement through lift and stride, but he still has a lot of room for improvement. His head goes in the opposite direction as he initiates foot strike, with considerable glove-side lean to manipulate a high arm slot. Richards is listed as one inch shorter than Kluber, but the spine-tilt gets him a few inches higher at release point.

It comes as no surprise that Richards thrives on power in his delivery, and though many pitchers will sacrifice stability because of the physical demands of a power delivery, the visual evidence indicates that Richards' imbalance stems from intent as opposed to a lack of functional strength. His momentum is a tick above average, but the power generator is big torque that is driven primarily by an exaggerated upper-body load, with a very short timing delay between hips and shoulders after foot strike. The lack of stability amidst shaky timing patterns doesn’t bode well for his ability to repeat the delivery and establish himself as a trustworthy arm over the long haul.

You need to be logged in to comment. Login or Subscribe
ddufourlogger
Another in a series of great articles, Doug...
Reply to ddufourlogger
MerleDixon
The timing of this article couldn't have been better. I was just contemplating dealing Taveras for Kluber as I am stacked in the OF and need pitching.
Are you sold on Kluber as a dominant ace for a few years? It certainly seems you are based on the comments about his delivery repeatability. Is he the Indians #1 3 years from now?