There’s no 18-inning equivalent this time. This time, instead of a fielder who got a ton of chances, we’ve got an excellent infielder who got only a handful of chances, a couple of them real tough. He made them all. He’s also an interesting defender, so it’s nice to have a chance to write about him.

Here are the four plays Josh Donaldson made on June 13th.

This is, Inside Edge says, a pretty routine play; the ball is hit slowly, the runner is slower still, and by the time Donaldson throws he can pretty much hand the ball to his first baseman. But, and I’m perhaps being too generous, there’s a non-negligible degree of difficulty here. Donaldson has to wander way out of position here, which isn’t much of a challenge for his (or any third baseman’s) range but does put him in a somewhat unfamiliar position; he has to turn and look back a baserunner who is so undefended that he’s a real threat to take off; his momentum keeps him moving forward even as he looks backward; while, meanwhile, having the distraction of the pitcher’s mound; before again facing forward and throwing on the run. Saying a play is 90 to 100 percent likely to be an out means it might be 100 percent and it might be 90 percent. This strikes me as closer to 90 percent.

Donaldson, of course, doesn’t have much experience at third base, which is part of what makes him an interesting defender. The story of Donaldson: A pitcher and shortstop in high school; pitched briefly and played all around the infield originally at Auburn; one day his team asked him to catch so they could squeeze another big bat into the lineup. Sure, he said. When he talks about the choice between catching and third base these days, it’s interesting how much the ability to market himself played into the choice. For instance:

“I guess if I could, I would tell that younger Josh Donaldson to stay at third base," Donaldson said. "But I felt at the time that scouts would be more intrigued with me as a catcher. I felt like I was a really good third baseman. But as a catcher, I ended up catching the scouts' attention.”

Then, years later, after improving his reputation as a defender behind the plate (nearly every report from the first couple years as a pro uses the term “substandard”), he began to play third base when the A’s needed him to. After getting demoted in 2012,

Donaldson was asked if he wanted to catch or play third base.

I bring it up just to note the irony. Donaldson would likely have been average at best at catcher; probably worse. He is an exceptional third baseman. He leads all third basemen this year, by a healthy margin, with 15 FRAA, and all the metrics agree that he’s well above average. Further, his move away from catcher is frequently cited as a reason for his offensive improvement, as he no longer needed to spend so much time focusing on the intricacies of that position. He can play every day now, and he’s less likely to get hurt doing it. In sum, you’d have to say that moving to third was the best thing that ever happened to him, and all that time he thought he was doing just the opposite by catching. Just goes to show how the most logical thought processes can lead to the most wrong outcomes.

(If you wanted to tease this out into a full-on allegory, you could note that the trade that sent Donaldson to Oakland was generally considered a win for Chicago and a loss for the A’s, not just at the time but for years afterward.)

2. Third inning, grounder hit by Ichiro Suzuki.
Inside Edge classification: Even, 40-60 percent likelihood of an out.

Sadly, we don’t have spray charts for the first half of Ichiro’s major-league career. We have them after 2007, and for a few years he was nearly peak-Ichiro, and during those years he hit baseballs in this general pattern: 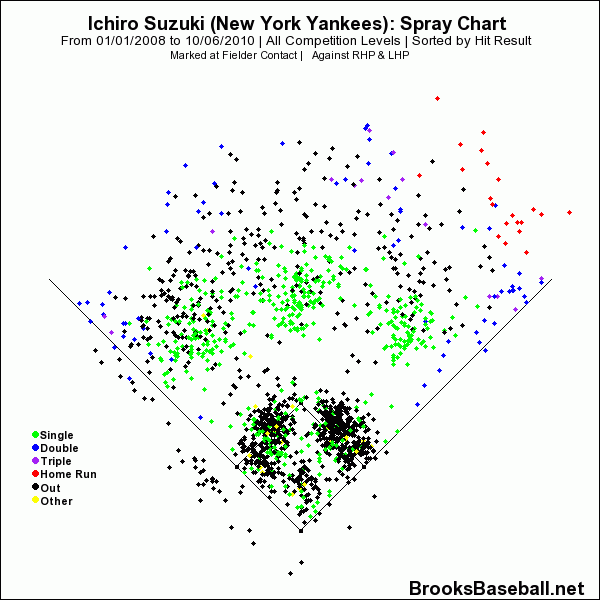 There’s a river that cuts through the infield, just between the third baseman and the shortstop, a green line through which Ichiro could safely travel to first base at will. That’s the ball that he hits to Donaldson. Inside Edge calls it 40 to 60 percent likely to be an out; a decade ago, it would have been roughly 0 percent likely to be an out. It’s a bit of a sad thing watching a spray chart change: No green river anymore. Happens to us all.

I’m supposed to be talking about Josh Donaldson. I’m not sure I like the barehand there. The play wasn’t that close. But, hey, whatever. That’s a thing Josh Donaldson can do, I now know.

3. Fifth inning, grounder hit by Derek Jeter
Inside Edge classification: Likely, 60 to 90 percent likelihood of an out.

That determination and drive was quickly apparent to Gallego. The coach remembers a time during spring training in 2013 when Donaldson—who spent the 2012 season shuttling between Sacramento and Oakland—wanted some extra work on slow rollers. He'd already reported at 7:30 that morning for extra grounders, then worked out with the team for three hours in the bright Arizona sun, but it wasn't enough. So Gallego agreed to meet Donaldson on the back field of the team's practice facility.

A normal slow-grounder session for Gallego's infielders might be three balls — five at the most. After all, it's a taxing play that involves charging in 40 or 50 feet, then torquing the body to grab the ball and fling it to first in one fell swoop. "I'm typically about quality, not quantity," says Gallego. But after the first few balls, Donaldson didn't like the way things felt. His approach angle was off. He was releasing from different points. His throws were tailing. So he asked Gallego to keep rolling. And rolling. And rolling. By the time Donaldson called it quits, they'd burned through an entire bucket of 75 balls. "Now?" says Gallego. "Don't bunt on the guy.”

4. Eighth inning, line drive hit by Brett Gardner
Inside Edge Classification: Unlikely, 10 to 40 percent likelihood of being an out

Sean Doolittle gets plenty of attention for his story: A position player, converted to the mound, and shutting down big-league hitters within a year. Donaldson’s story isn’t quite so dramatic, but it’s not that different. Like Doolittle, he had played his new position in college and high school. He almost never played anywhere but catcher in the minors, then one winter he decided to go to the Dominican Republic to learn the position. The reason was, again, marketing; if he could show clubs he was versatile, it’d help him find a new team if the A’s released him.

Then, by chance, while the A’s were in camp the next spring, Oakland’s third baseman, Scott Sizemore, hurt himself. Suddenly, Donaldson was the available third baseman. He was still relatively new to the position, so he must have been pretty raw; must be getting better as he gets more reps, right?

I’m not sure. If you look at the Fans Scouting Report that Tom Tango conducts every year, you’d think he is. After his first season at the position, fans that watched him every day cumulatively rated him a 59 on a 100-point scale. Then, after his second year, they rated him a 70, which is the sixth-highest for a third baseman.

But here are his fan-voting scores for each category:

Almost every category goes up by the same amount. Even arm strength. Did his arm really get stronger? Probably not. He’s had a great arm since high school. It’s hard to imagine his arm strength suddenly improving in his late 20s—by, conveniently, the same amount that his first step, speed, and release improved. It’s easy to imagine fans thinking his arm is stronger because they spent a lot more time thinking about Donaldson, hearing about Donaldson, seeing the sterling ratings that advanced metrics give Donaldson, etc. I’m skeptical about the fans’ insights on this one.

Donaldson is a very good defender. UZR and DRS think he has been since just about his first game in the majors. The A’s were talking up his defense before he’d ever appeared at the position, at least in the big leagues:

The team not only likes the fact that he took it upon himself to go to the Dominican to play third, but that he also has improved his defensive metrics there enough to be considered for a big-league spot.

Like Doolittle, Donaldson started doing something that is supposed to be very complicated and made it look immediately easy. There was a ton of hard work behind it all, and that hard work was certainly not easy. These guys are pretty amazing, it helps to remember.

You need to be logged in to comment. Login or Subscribe
walrus0909
I'm surprised that McCann grounder was rated as an easier play than the Jeter grounder. I know Donaldson had to kind of wait for the ball rather than charging it, but still.