In April, I started a season-long series devoted to tracking bunts for base hits with the infield shift in effect; this is the 11th installment. To bring you up to speed on the series’ premise and methodology will take but two brief excerpts. Excerpt one:

And now you’re caught up. Today we’ll cover the games of June 19–25; as always, the list of bunts comes courtesy of Inside Edge. I have five new bunts against the shift to show you, including the first attempt to beat the shift this season by a right-handed batter, plus the latest research from Chris Mosch on how defenses are counter-adjusting to the threat of the bunt. Let’s get started.

Rizzo has been responsible for some of this season's best bunting heroics, but this wasn't one of his best efforts, and Watson was quick off the mound.

Right-handed batter bunt alert! Lefties aren't the only ones getting shifted these days, and Lake's groundball spray chart reveals why the Angels were shifting him here. 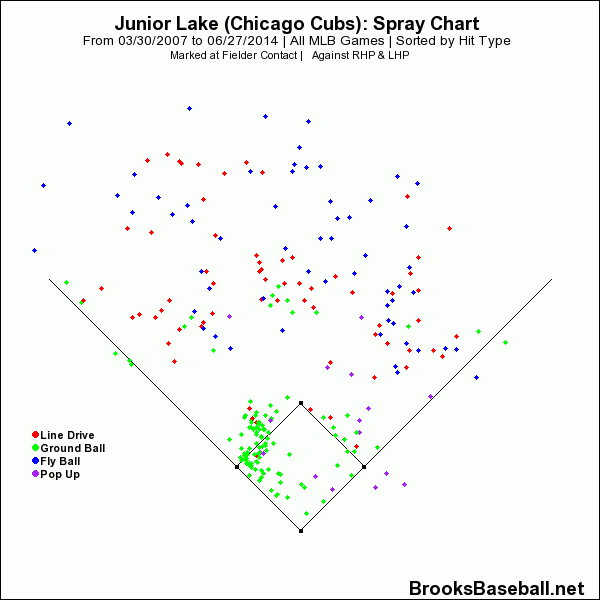 With the shortstop and third baseman playing deep and toward the third-base bag, Lake tries to bunt the ball up the middle. He directs it toward the second baseman instead, but he beats it out because he has super-speed.

A little too tentative. Bunting favors the bold.

Pedro Alvarez made this much closer than it could have been, but Kiermaier was too quick for the ball to beat him to the bag.

Efforts like this give bunting to beat the shift a bad name.

One final note: A hearty welcome back to the big leagues to Carlos Pena, bunting-to-beat-the-shift trailblazer. I eagerly await his first 2014 attempt.

After the (Bunted) Ball
Here’s this week’s report from Chris Mosch on how defenses adjusted (or didn’t adjust) to the bunters from last time. —Ben Lindbergh

Nick Swisher, George Kottaras and Carlos Santana
Swisher’s bunt attempt to beat the shift on June 16 against the Angels probably ranks among the bunts least likely to inspire a change in the opposing team’s defensive alignment. A refresher on Los Angeles’ infield alignment against Swisher and how bad his bunt was:

However, two batters later, his teammate George Kottaras laid a picture-perfect bunt down the third base line. Kottaras didn’t get another at-bat during the series, but the Angels presumably would have brought David Freese in to defend the bunt against him, considering that’s exactly what they did against Swisher the next night. 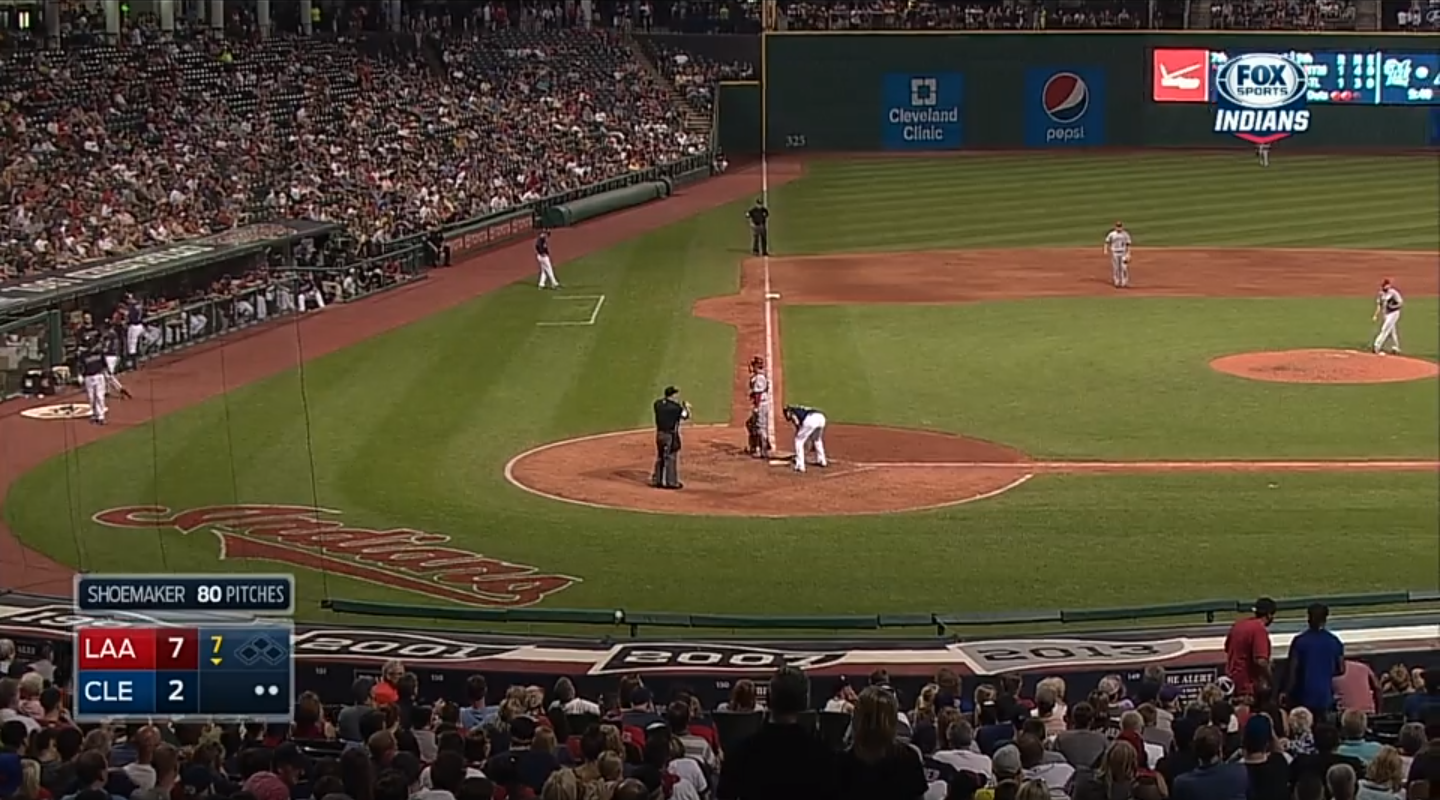 Swisher’s bunt attempt was poor, and it was his first attempt to beat the shift, yet the Angels countered their defense accordingly. It’s taken most batters at least a decent bunt attempt and a close play at first to push teams to realign their defense, so it seems reasonable that Kottatas beating the shift so easily influenced the Angels to play it safe against Swisher.

The Indians feature another prolific bunter against the shift, Carlos Santana, and with the Angels already mindful of Swisher and Kottaras, a mere attempt at a bunt against the shift changed Los Angeles’ infield alignment against Cleveland’s slugger. During Santana’s first plate appearance of the series (which was before either Swisher’s or Kottaras’ bunt), the Angels made no attempt to defend against a possible bunt by Santana. 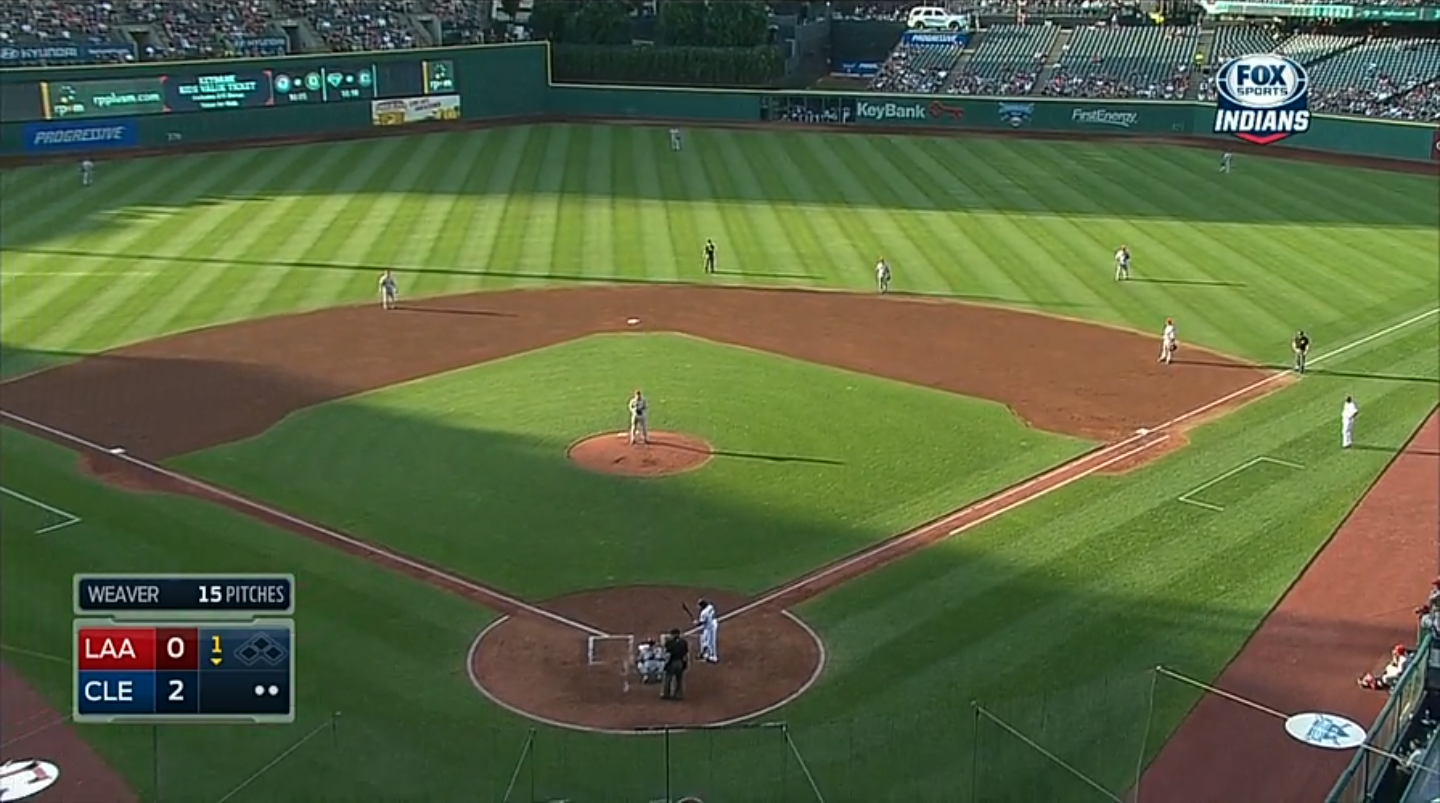 But during his first at-bat the next day, Santana squared around on a 2-1 offering and fouled the ball down the third base line. The attempt was poor enough that neither broadcast switched its view to show either the infielders reacting or where exactly the ball ended up. However, it’s fair to assume that Santana—who isn’t the lightest on his feet—wouldn’t be trying to lay down a bunt in a hitter’s count unless he had ample room to work with down the third base line.

The next time Santana stepped to the plate, the Angels took that opportunity away (or rather gave him the entire shortstop hole to try to slap a base hit). 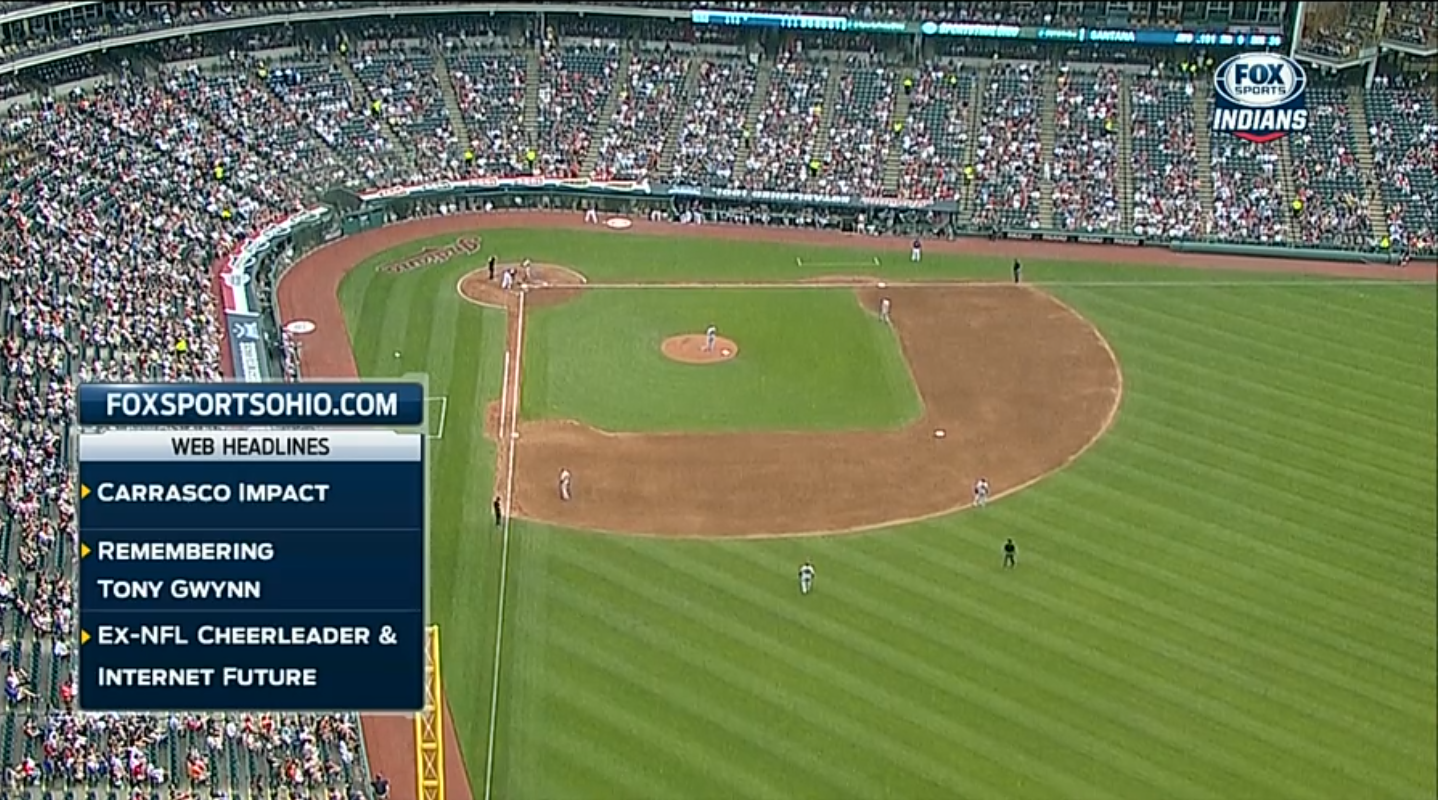 Chase Headley
Headley’s attempt to beat the shift against the Mariners proved futile, as his bunt traveled all of 10 feet and straight back to the pitcher. Neither broadcast showed Kyle Seager in a bases-empty situation with less than two strikes until two days later, so we were unable to see how Seattle reacted in the at-bats immediately following the bunt attempt. However, if the Mariners did subsequently readjust their alignment, the change in philosophy didn’t last long. Here’s their defense against Headley during his second at-bat of the third game between the two clubs. 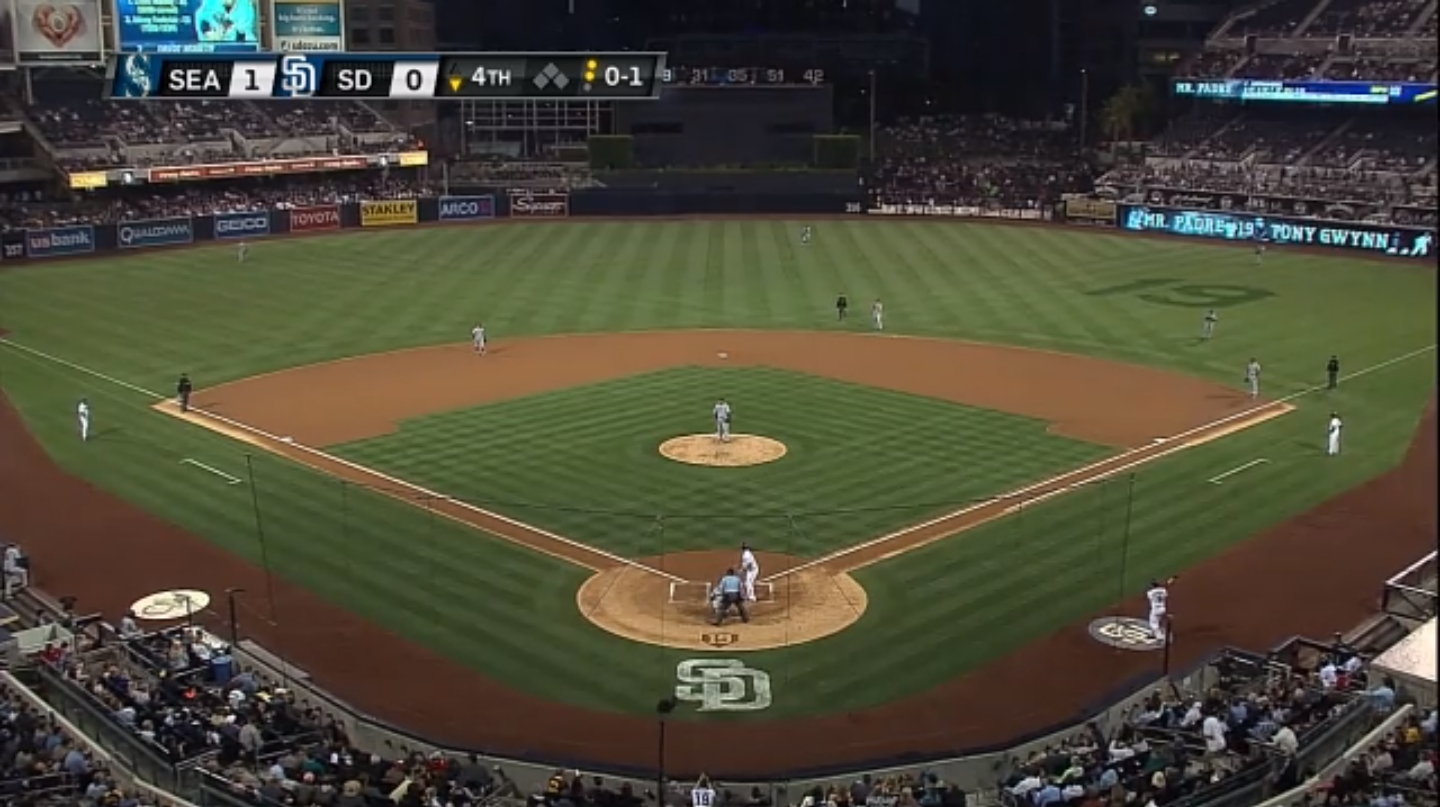 Thanks to Nick Wheatley-Schaller for video assistance.

You need to be logged in to comment. Login or Subscribe
nvavalle
I may have missed this, but is there an explanation on the shift type codes somewhere?
Reply to nvavalle
bornyank1
http://www.baseballprospectus.com/article.php?articleid=23675
Reply to bornyank1
cchatham
Not exactly bunting to beat the shift, but how about the Pirates trading an out for a run against the shift when they had runners at the corners with two outs against the Mets a couple of days ago.
Reply to cchatham
cmosch
I wrote briefly about that play in Friday's WYNTK!(http://www.baseballprospectus.com/article.php?articleid=24016).
Reply to cmosch