In the wake of 26-year-old Clayton Kershaw’s dazzling no-hitter last Wednesday, a 26-year-old statistic got its own moment in the sun. When Bill James introduced Game Score in the 1988 Baseball Abstract, he called it “a kind of garbage stat that I present not because it helps us understand anything in particular but because it is fun to play around with.” Unlike Micro Machines and Dolly Surprise, Game Score remains one of our favorite toys in 2014, so it’s safe to say that James undersold it. Despite (or maybe because of) its lack of sophistication, it’s still one of the most intuitive methods we have to convey how effective a given outing is. Thus, it wasn’t long after Kershaw sealed the deal with his 15th strikeout that the internet noticed that his Game Score of 102 was the second-highest ever for an outing of no more than nine innings, behind only Kerry Wood’s 20-strikeout start in 1998, which got a Game Score of 105. (Remove the innings restriction, and Vern Law’s 18-inning effort in 1955 takes the cake.)

That almost-unprecedented “102” lent some statistical support to what we all thought while watching Kershaw: that his outing was one of the most dominant ever. However, it made me wonder: Is it fair to use Game Score to compare starts across eras?

As a reminder, here’s how Game Score works:

Game Score doesn’t attempt to account for everything—hit by pitches, batted-ball distribution, ballpark effects—and nitpicking about methodological flaws goes against the stat’s simplistic spirit. Still, the difficulty of accumulating each of those point-conferring components has fluctuated over time. Kershaw racked up 15 strikeouts, but we know that K’s are easier to come by than they were when Wood got to 20, let alone when Roger Clemens did. Nolan Ryan posted a 101 Game Score in a 16-strikeout start in 1991; doesn’t the Express deserve a boost for topping Kershaw’s total in a season when strikeouts were 26 percent scarcer? And mightn’t that boost be enough to push him past 102? 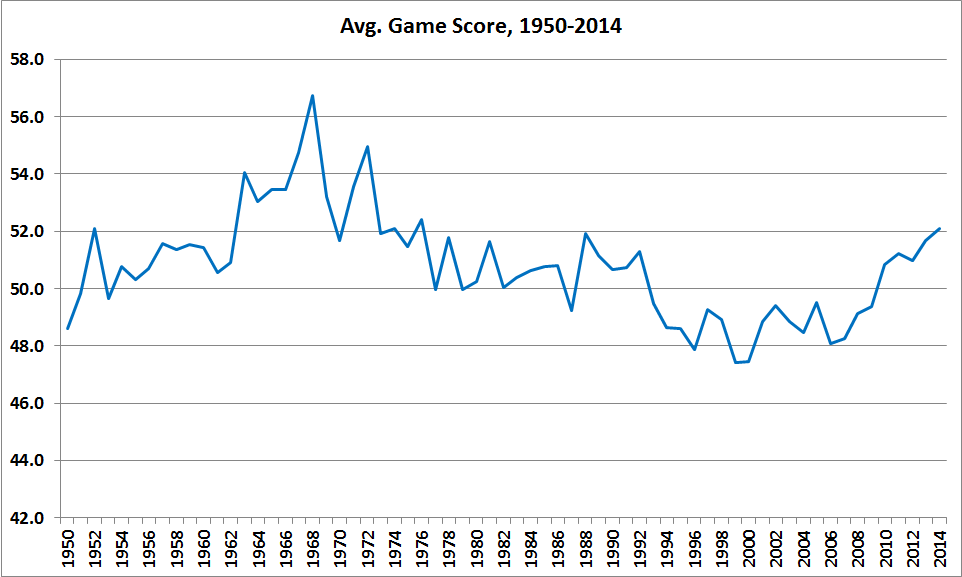 The annual average game score has stayed within an 8.8-point span over the last 65 seasons, ranging from a high of 56.2 in 1968, the Year of the Pitcher, to a low of 47.4 in 1999–2000, the height of the crazy-offense era. (Because pitchers from earlier eras pitched into extras more often than they have lately, removing the nine-inning restriction increases the range very slightly, from 8.8 points to 9.3.) The average of all of the annual averages is 50.8, and the average in 2014 alone is 52.1—the 10th-highest single-season value, and the highest since 1972, the year before the addition of the DH. (Caveat: Comparing 2014’s average Game Score from the first half to historical full-season values isn’t entirely fair, since scoring rises during the warm summer months.)

How is it that the average Game Score in 2014 is so close to the historical average, despite dramatic changes in league-wide contact rate and pitcher usage? Actually, that’s kind of the key—both of those things have shifted dramatically, in ways that tend to counteract each other where Game Score is concerned. Consider this graph of the average per-start totals of each of the Game Score components in each season from 1950–2014: 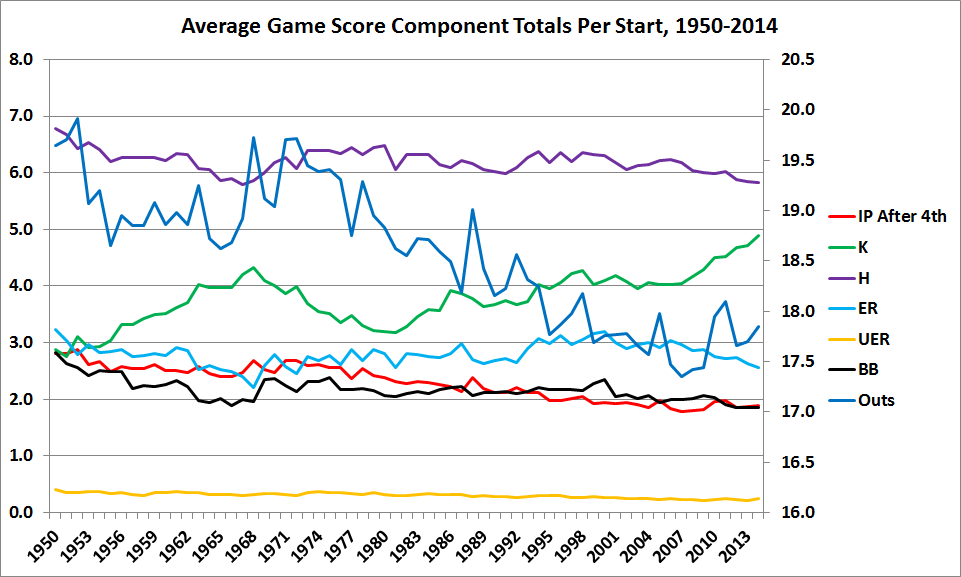 The average number of outs recorded (dark blue line) and innings completed after the fourth (red line) in the typical start have fallen, but the average strikeout total (green line) has risen nonetheless. As a result, the average Game Score has remained relatively stable over time. Here’s how the per-start average of each of the Game Score components in 2014 compares to the overall average from 1950–2013.

Per-start strikeout totals are higher now than they have been historically; every other average total is lower. Fewer outs recorded and innings completed after the fourth tend to depress Game Score, but more Ks accumulated and fewer hits, walks, and runs allowed tend to inflate it. Hence the slightly higher average overall value for 2014.

Game Score is a bit of a blunt instrument, but on the whole, it still does a fine job of distinguishing the strong starts from the duds. Because of the fluctuations in the average figures from season to season, though—small as they are—adjusting for era can have a significant effect on single-start leaderboards.

For instance, here’s a list of the highest Game Scores in starts of no more than nine innings, courtesy of the Baseball Reference Play-Index. As mentioned above, Kershaw’s no-hitter ranks second. If we adjust for the deviation of the average Game Score in each given season from the 1950–2014 average, though (by the amount indicated in the “EraD” column), we see some changes (as indicated in the “EAGS” column on the extreme right).

So yes, we might have to add an asterisk to Kershaw’s accomplishment in the Game Score department—but only an unobtrusive one. For all its limitations, and as much as the typical outing has changed over the years, Game Score still does a decent job of capturing how unhittable he was.

You need to be logged in to comment. Login or Subscribe
MylesHandley
It seems difficult to actually do this (because we didn't have pitch f/x in 1998, but re-watching the Kid K game reveals that his strike zone was AWFULLY big. I wonder if it would be possible to adjust the more recent games to take this into account.
Reply to MylesHandley
wthomson
Why isn't Bill James in the Hall of Fame?
Reply to wthomson
BaseballFuries
Hey, this work means I was at one of the EAGS third best games ever (Schilling in 02). Any further work you do to increase the bragging rights I have by attending the games that weekend is worth the price of a subscription.

Johnson struck out 12 the day before - Geoff Jenkins and Jose Hernandez struck out 12 times total in the 2 days. Jenkins looked particularly helpless.
Reply to BaseballFuries
onearmedecon
Rather than Game Score, why not simply calculate an xFIP for each game in order to create a standardized measure with which to compare great pitching performances? According to a brief note after the game from Dave Cameron last week, Kershaw's xFIP was 0.19, but it would be interesting to see how that compared to Nolan's perfect game, Wood's 20 K, etc. To evaluate the utility of Game Score, it would be interesting to see whether the correlation between Game Score and xFIP has changed over time based on different seasonal league-average HR/FB rates.
Reply to onearmedecon
danrnelson
My goodness, Nolan Ryan
Reply to danrnelson