On Thursday morning, MLB.com writer Richard Justice noted that all but a handful of teams were within hailing distance of the closest playoff spot.

In the American League, only the Rays, who were 10 out, failed to clear the bar. In the National League, the Padres, Phillies, Diamondbacks, and Cubs composed the “greater than five games out of the wild card” crew, and none of them was more than seven games out of the playoff picture. There was one team on pace to lose 100 games (Tampa Bay), and one on pace to win 100 (San Francisco). Even as economists and pundits loudly lament the decline of the American middle class, baseball’s haves and have-nots have become essentially indistinguishable in the standings.

Let’s attempt to assess how historic this sort of parity is at this point in the season. Today, 24 of 30 teams (80 percent) are within five games of a playoff position. (Two, the Mets and the Phillies, are now 5.5 out.) The graphs below show the percentage of teams within five games of a playoff spot and the average distance from the closest playoff spot among all teams through June 12 in every season since 1950, accounting for differing playoff formats. (Note: We’re going by date here, although the portion of the schedule completed by June 12 has varied by season, depending on the date of Opening Day.) 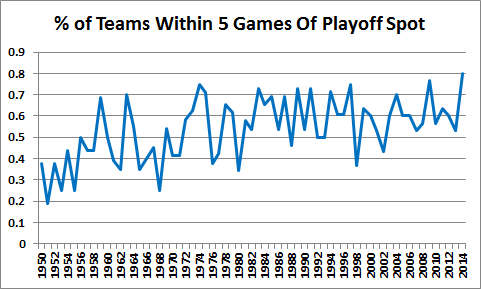 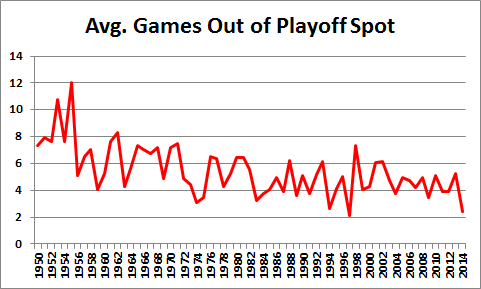 Even today, with one less team within the arbitrary five-game deficit range than there was yesterday, 2014 takes the title of “Most Balanced,” with 1974, 1997, and 2009 the only other years in which three quarters or more of teams have been in close contention on this date. (As the second graph reveals, June 12, 1997 had a slightly lower average deficit. That season, four races ended with <5-game gaps between first and second place, but only two teams finished <5 games out of the wild card spots, so it wasn’t a pennant race for the ages.) In other words, yes, this is historic. We’re living in truly exceptional times for competitive balance in baseball. Congratulations on being born when you were.

Of course, this state of affairs isn’t quite as improbable as the preceding sentences make it seem. Baseball’s structure has been altered radically in an attempt to produce this very result. It stands to reason that the more playoff spots there are, the more teams are going to be contending at any one time, so the balance is by design: Everything is proceeding as Bud Selig has foreseen. This is only our third season with the second wild card, so we don’t have a large enough sample to say how many teams will typically be this close to a playoff position in mid-June. On this date in 2012, though, 18 teams were within five games of a playoff spot, and last season, only 16 were, so we know that the 10-playoff-team format doesn’t guarantee that mid-20s is the new normal.

The lack of separation between teams so far this season has long been (at the risk of conjuring an indelicate and disturbing visual) Bud Selig’s wet dream. The commissioner has been criticized, often fairly, for dragging his feet in certain areas, but he made promoting parity part of his platform early on, appointing a four-person Blue Ribbon Panel on Baseball Economics in 1998 that made this ominous pronouncement in July 2000:

Large and growing revenue disparities exist and are causing problems of chronic competitive imbalance. These problems have become substantially worse during the five complete seasons during the strike-shortened season of 1994 and seem likely to remain severe unless Major League Baseball undertakes remedial actions proportional to the problem.

Major League Baseball heeded the panel’s warning, instituting balance-promoting initiatives like revenue sharing and the luxury tax, and those measures, combined with many others—including the ever-increasing intelligence of front offices, the explosion in TV money that has allowed smaller-market teams to follow John Hart’s lead and lock up young homegrown talent, and the post-steroid-era aging curves that make it more difficult to assemble productive rosters via free agency alone—have led to the current, “anyone and everyone can contend” climate.

This is what we set out to do. We have, unquestionably, more competitive balance than at any time in history. We had to do a lot of things to achieve this, make changes in the economic system, and it has led us to where we are today.

Selig says that where we are today is wonderful, and he also says that he’s proud. It is, and he should be. Take a bow, Bud.

In the same piece USA Today (today), Bob Nightengale wonders whether parity is an improvement if it means giving up “great” teams for a sea of “mediocre,” .500-ish squads. However, while he’s right that there aren’t many teams whose records stand out from the pack, that doesn’t suggest that we’re seeing a lower caliber of play. There’s no reason to think that the league’s level of talent has declined; all that the bunched-up records tell us is that the talent is distributed across rosters more evenly, which should lead to fewer lopsided matchups. If we’re giving up “great” teams, we’re also giving up depressing, perennial losers. Sound like a good trade to you, Pirates and Royals fans? Anyone really hankering to go back to the “Golden Age of Baseball”?

Maybe a better question: Does the average fan care that the sport in 2014 lacks a true super team? Was any fan of a club out of contention a decade ago ago consoling him or herself with the thought that while his or her own team was well on its way to mathematical elimination, at least the Yankees were still steamrolling opponents? While the dynasty years were fun for Yankees fans, they were the opposite of fun for everyone else. If anything, the fact that almost every fan base can convince or delude itself that its teams’ games are still meaningful should translate to increased interest and attendance as the season goes on, though it’s worth noting that it hasn’t so far: Per-game attendance is down by 270 fans per game compared to the same point in last season’s schedule.

As Sam Miller and I discussed on Effectively Wild today, the immediate impact of super-parity could be a super-slow trade deadline. While our Playoff Odds Report suggests that some of the teams that are still in contention are likely to be exposed as pretenders, it’s not easy to authorize a future-oriented swap when your fans are looking at a single-digit deficit now. We’re already hearing rumblings that very few teams have accepted that they’re out of the race, and with the cellar-dwellers of the last few years—the Astros, Twins, and Cubs—clearly on the upswing, even fewer clubs can confidently count themselves out of the running next season, which means that most will be reluctant to deal veterans who could help them beyond the second half of 2014. By discouraging talent dumps, parity early in the season might beget even more parity a few months down the road.

With a seller’s market over the next six weeks and a weak free-agent class on the way this winter, teams that do have attractive pieces to unload could find the conditions favorable for a trade. Maybe the Rays will enter the market in search of a big score that could propel them back to contention as soon as next season. After all, in a time of super-parity, a 25-42 start to this season isn’t an insuperable obstacle to an October berth in 2015.

You need to be logged in to comment. Login or Subscribe
doctawojo
You didn't have to say "wet." Just "dream" would have sufficed. smh
Reply to doctawojo