In an effort to carve out a niche on the stellar fantasy team here at Baseball Prospectus, I wanted a weekly column that would allow me to do three things: (1) to dive in-depth into individual player performance, (2) to offer BP readers advice on who to target in trades, who to hold onto, and who to sell without resorting to superficial analysis, and (3) to develop an interactive column with the readers.

This column will focus on an individual player each week, breaking down past performance and attempting to determine what fantasy owners can reasonably expect to transpire in the future. We’ll certainly focus on statistics—and primarily so—but it’s my hope that this space will also eventually allow us room to explore mechanical changes, new pitches, etc. with the help of other Baseball Prospectus writers who are much smarter than myself.

The goal of each column will be to determine whether an individual player is worth targeting in trades for fantasy owners, or if the player should be placed on the trading block and moved before his performance can drop off. However, the process of breaking down trends and doing our best to project future performance will inevitably be more useful than the ultimate “buy” or “sell” or “hold” label.

Most weeks, it should be simple enough for me to identify a particular player on whom to focus, but in other weeks, it may be a struggle. I’d like to invite you to offer your suggestions in the comments and on Twitter (you can drop suggestions for me at @JP_Breen). After all, the column is only successful if y’all are finding it useful and I’m featuring players y’all find worthwhile.

With that said, welcome to The Buyer’s Guide. Let’s do this.

Homer Bailey appeared to be on the precipice of becoming a top-tier fantasy starter. He was the 21st-ranked starting pitcher in ESPN fantasy leagues last year, and everything was trending properly. The velocity had increased in back-to-back seasons, the swinging-strike rate was up significantly, the ground-ball rate had improved every year since 2011, and his FIP dropped yet again to 3.31. Understandably, fantasy owners highly valued the 28-year-old hurler, drafting him as the 25th-highest starter—ahead of guys like Masahiro Tanaka, Gerrit Cole, Julio Teheran, and Michael Wacha.

Thus, it’s understandable that many owners are disheartened and perhaps even inconsolable with regard to Bailey’s start to the season. He owns a 5.04 ERA with a gag-inducing 1.51 WHIP, and opposing teams are hitting a cool .292 against him. Coming into Sunday, Bailey was the 125th-ranked starter in ESPN leagues. He’s been an unmitigated dumpster fire for fantasy owners.

Five of his six starts in the month of May, however, have quietly been quality starts, which has led some fantasy owners to believe he could perhaps be shaking the monkey off his back and once again be poised to become a solid no. 3 fantasy starter.

The recent string of quality starts is certainly reassuring, but I’m much more interested in the underlying skill set. Bailey is one of the handful of starting pitchers who have compiled a better-than-average strikeout rate, walk rate, and ground-ball percentage. He owns a 19.9 percent strikeout rate, a 7.4 percent walk rate, and a 54.9 percent ground-ball rate. Around these parts, I hear we call that The Holy Trinity. And speaking as someone who’s currently trudging through graduate school studying religious history, I can dig it.

To put those numbers in perspective, check out the year-to-date rankings (in ESPN leagues) of the other starters who came into the weekend with The Holy Trinity:

Everyone who qualifies for The Holy Trinity is essentially a top-50 starter with the exception of Brandon McCarthy and Homer Bailey, who both appear to be outliers and are well outside the top 100. Such a difference naturally leads one to believe that their performance and subsequent fantasy ranking should improve and become closer to their counterparts throughout the remainder of the season.

Fantasy owners should be encouraged that his sudden velocity spike from 2013 has carried over into the 2014 season. His fastball averaged 95.34 mph a year ago and his sinker averaged 94.49 mph. This year, his fastball is at 95.26 mph and his sinker is at 94.81 mph. Velocity spikes can be fickle and some argue they can lead to injury, but it appears Bailey is showing some consistency in that realm.

It’s also important to note his 4.25 FIP suggests he’s pitched better than his earned run average would otherwise indicate. While that’s still not overwhelming, his 3.60 SIERA is even more encouraging. Again, not otherworldly, but the fielding-independent numbers hint his performance should continue to turn around.

This isn’t, however, an effort to simply look at his .340 BABIP and his 17.5 percent HR:FB to simply argue he’s been unlucky and that things will change. It’s more than that. Bailey has been genuinely terrible against left-handed batters this season, and that must be addressed. They’ve hit .373/.457/.574 against the right-hander. His strikeout-to-walk ratio is a putrid 1.14 K:BB versus lefties, but is a sparkling 5.71 K:BB versus righties. That’s taking a platoon split to the extreme, which is a massive problem that’s not explainable by pointing at BABIP and crossing one’s fingers in hopes of the problem disappearing.

Bailey’s ineptitude against lefties starts with his breaking balls. Earlier this season, Doug Thorburn argued that the right-hander has been quite predictable, foregoing his offspeed pitches unless he’s ahead in the count, but against lefties, his offspeed offerings have been wholly ineffective. 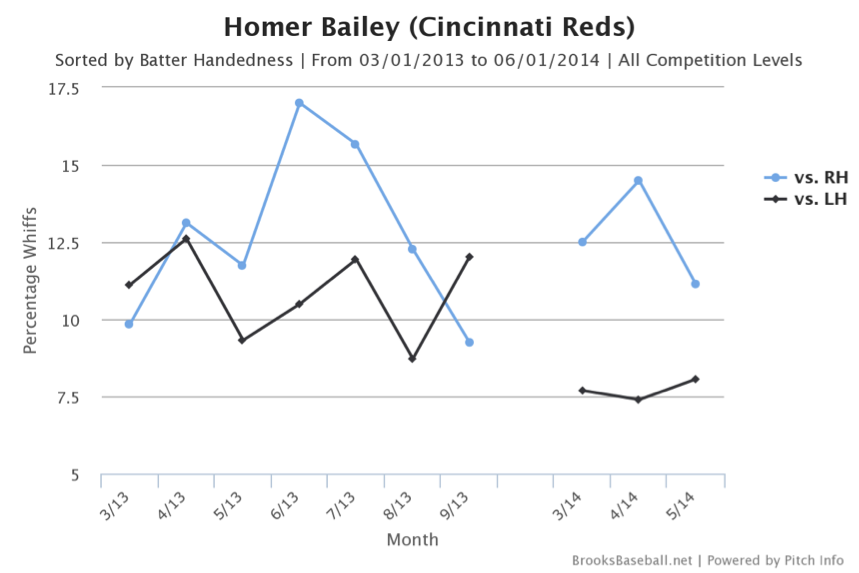 Before breaking down the breaking ball itself, though, it should be noted that the overall whiff percentage against lefties is substantially lower than a year ago. The fact that he’s still posting an above-average strikeout rate is thus respectable in itself, but it would even be better if his performance against lefties jumped to what he did a year ago.

It’s not difficult to ascertain the problem. The numbers jump off the page. The swinging-strike rates for his slider, curveball, and splitter against righties are 14.92 percent, 19.57 percent, and 33.33 percent, respectively. Against lefties, those numbers decrease to 4.55 percent, 3.77 percent, and 21.15 percent. Even Bartolo Colon is a little embarrassed at those numbers, as even he gets a swinging-strike rate over 6.00 percent on his slider. Just for comprehensiveness, Bailey’s fastball and sinker have been roughly the same in terms of generating swings-and-misses between righties and lefties.

Thus, it seems his inability to consistently get whiffs with his off-speed stuff against lefties has played a significant role in his struggles. His location has been bad, though, as well. Here is the heat map of the location of his pitches against lefties: 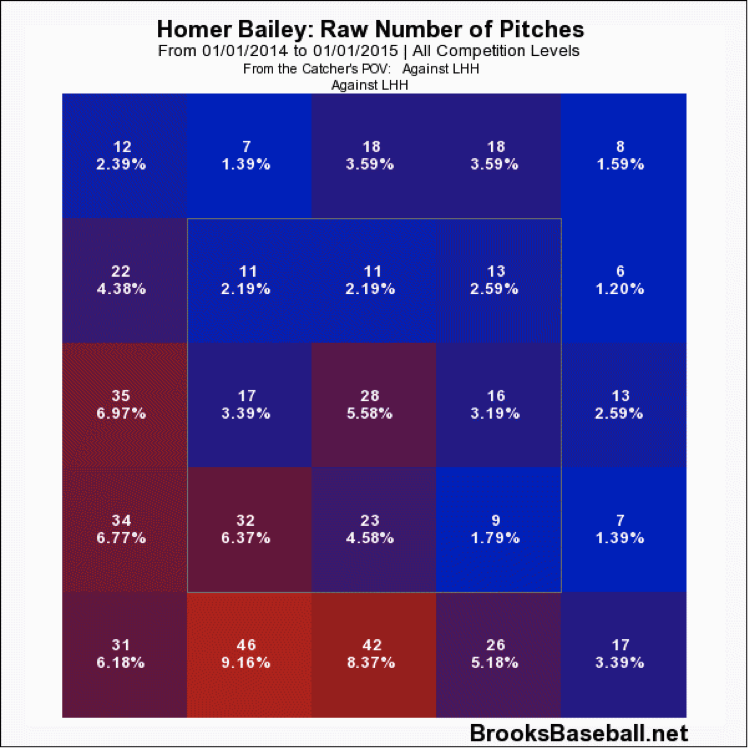 Notice the red square down the center of the plate. That’s obviously undesirable and suggests he’s essentially setting pitches on a tee for lefties too often. It becomes even more interesting once we look at his heat map from a year ago against lefties, where we can see a noticeable difference. 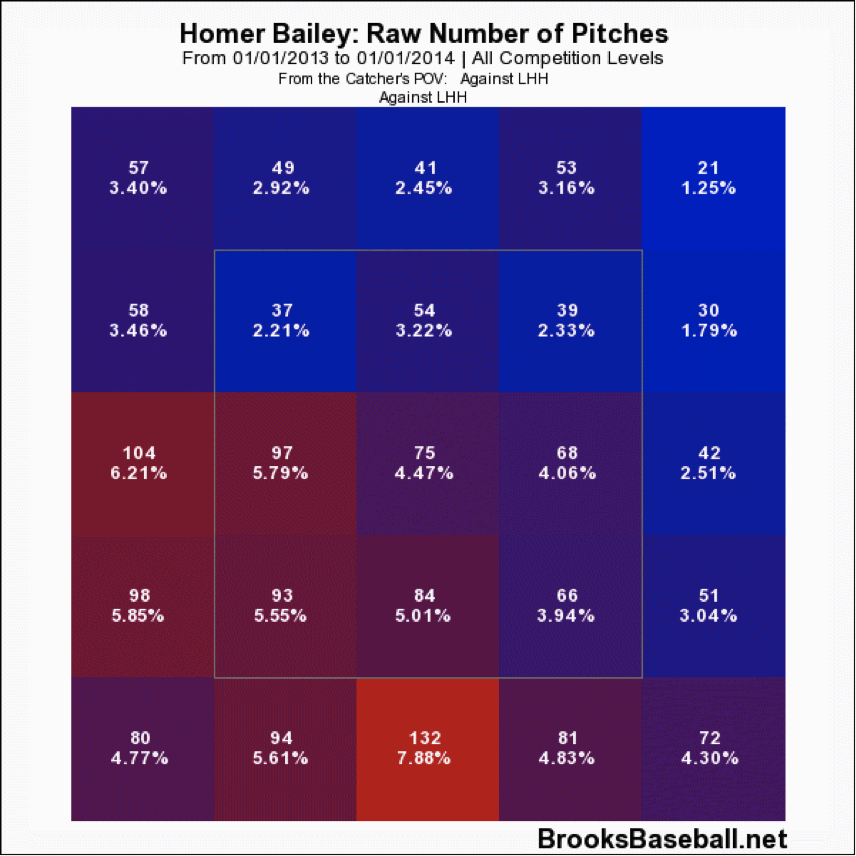 The center zone remains slightly red, but Bailey pounded the quadrants just to the left (which would be on the outer edge of the plate, or just off it, for lefties) much more frequently. It seems the right-hander is having a difficult time finding the outside corner against lefties and he’s been either missing the zone—hence his high walk rate—or finding the middle of the zone. That’s obviously not a recipe for success.

Therefore, I’m not willing to suggest that Homer Bailey is a pitcher without flaws or will somehow dominate lefties throughout the remainder of the season. Rather, I’m arguing Bailey has offered strikeouts, a palatable walk rate, and ground balls despite his horrendous performance against lefties. If that platoon split returns to his career split of .267/.339/.426, he’ll start performing much more like fantasy owners got used to a year ago. Not to mention the combination that comprises The Holy Trinity is also too attractive to just ignore.

Don’t be afraid to pull the trigger and acquire Bailey, as long as the price isn’t too high. The right-hander has surreptitiously cobbled together five quality starts in his last six outings. Hopefully, the overall 5.04 ERA has still left a foul-enough taste in his fantasy owner’s mouth that he’ll be willing to sell low. Bailey isn’t without his warts, to be sure, but he represents a solid value play that has a chance to work beautifully if he can iron out his issues against left-handed hitters. He’s done it in the past, and the body of work is too extensive to believe he cannot do it again.

You need to be logged in to comment. Login or Subscribe
eas9898
Interesting analysis. Thanks!
Reply to eas9898
sean7711
Thanks for making me feel better about Bailey this Monday morning.

Can you do Hiroki Kuroda next or is that a lost cause?
Reply to sean7711
RALederer
Bailey's K% (19.9%) is actually below league average (20.3%).
Reply to RALederer
jimmyb1799
I limited the league-average number to starting pitchers, where the league average is 19.5%. If you include relievers, which I didn't feel was appropriate when analyzing solely starter performance, it jumps to 20.3% and Bailey wouldn't qualify.

Would you say that Brandon McCarthy is also someone to trade for?

Steve
Reply to bluester
jimmyb1799
Thanks for reading, Steve. If the price is right, McCarthy is absolutely a nice buy-low option. The injury concern is always there for the right-hander, though, so don't go crazy. In my opinion, he's the most risky guy on The Holy Trinity list.

As always, if the price is right and he makes sense for your current roster construction, go for it. I just wouldn't be willing to give up anything significant.
Reply to jimmyb1799
jonjacoby
Great piece. What depth leagues is this information targeted to?
Ideas for next column: Adam LaRoche or Pablo Sandoval.
Reply to jonjacoby
rsealock
Good article. Just acquired Bailey yesterday in a roto dynasty league (previous owner covered 10 of the 15 million he was owed). So I have him for 5 years at 5 million total. Definitely was able to buy low. This article certainly makes me feel like the deal is even better now.
Reply to rsealock
BlazingFastba11
Very thorough article JP. Welcome to BP and keep up the great work!

Now I know why you rebuffed all my attempts to get you to trade Homer Bailey to me in #TDGX, although I did finally acquire Brandon McCarthy from you. ;)

Since you are taking suggestions, I would be interested in your thoughts on Justin Upton, Jay Bruce and Collin McHugh.
Reply to BlazingFastba11
Timcarvin
Nice to see JP on BP. This is excellent.
Reply to Timcarvin