Same old intro time: Last month I started a season-long series (continued here, here, here and here) devoted to tracking bunts for base hits with the infield shift in effect; this is the sixth installment. To bring you up to speed on the series’ premise and methodology will take but two brief excerpts. Excerpt one:

And now you’re caught up. Today we’ll cover the games of May 15–21, and boy, have I got some bunts for you (as always, courtesy of Inside Edge). We've added a "shift type" for each bunt/bunt attempt this week, so here's a key, courtesy of IE's Kenny Kendrena:

The 1 and 15 shift types are both 3-Infielders on one side of the diamond types of shifts. The only difference between those is that the 15 is where the fielders are non-contiguous (i.e. third baseman in RF). 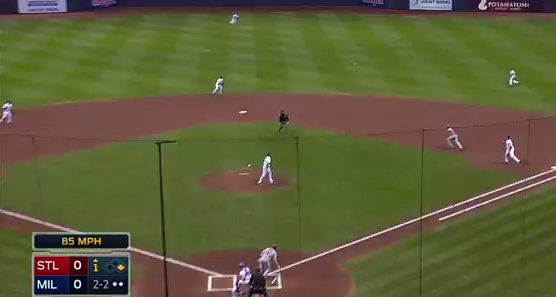 Got all that? Let’s lay it down like the left side is open and Asdrubal’s in town.

Rizzo beat the shift with a successful bunt against Masahiro Tanaka in April, but his bunting ability had lain dormant for weeks until he caught the Cardinals napping.

Oh. In his next at-bat, Rizzo gets a breaking ball from Wacha, but he bunts it to the left side again and gets the same reward. The Cardinals can't say they weren't warned, and they can't claim to have forgotten what went down in Rizzo's previous at-bat, but they made no adjustment at all, daring him to do it again. Overshifting against Rizzo again worked as well for Mike Matheny as building another Death Star to destroy the Rebels did for Emperor Palpatine.

"First time I've seen a guy beat the shift with a bunt twice in a game," Kendrena says.

More like McCann't, amirite? (Seriously, McCann is having a lousy offensive season.)

Mitch Moreland squared around once with the shift on earlier this season, but this was the first time he went through with it. Unfortunately, he made a rookie mistake—he bunted against Buerhle, who always finishes in perfect fielding position.

Buehrle woulda had it, but Neil Ramirez falls off toward first.

Adrian Beltre, ladies and gentlemen. This would have worked out well for Seager against almost any other third baseman. We've learned two important lessons this week: Don't bunt against Buehrle, and don't bunt against Beltre.

To that effect, here’s the latest list of threatened/attempted bunts from the past week that led to fouls or taken balls or strikes. Eventually, we’ll have a large enough sample to say something about how often bunt attempts give birth to bunts. —Ben Lindbergh

After the (Bunted) Ball
This week’s report from Chris Mosch on how defenses adjusted (or didn’t adjust) to the bunters from last time:

It doesn’t appear that any of the guys whose bunts were unsuccessful saw any different defensive alignments against them in subsequent trips to the plate. The Padres presented the same alignment to Joey Votto during his next at-bat, and the Mets didn’t have a problem leaving the left side of the infield open against McCann throughout the rest of the Subway series. Eric Hosmer and Matt Joyce didn’t have any more at-bats with the bases open during the rest of their respective series.

None of the teams even appeared to change their defensive alignment during at-bats where a batter attempted or threatened to lay down a bunt.

Most teams appear to be fine with letting guys bunt against the shift until they prove they can lay one down for a hit. However, the White Sox may be one of the exceptions, as they appear to be taking steps to crack down on bunts against extreme overshifts.

Josh Reddick
After Reddick bunted for a base hit in the seventh inning on May 12th, the White Sox moved their third baseman to protect against the bunt the next day. 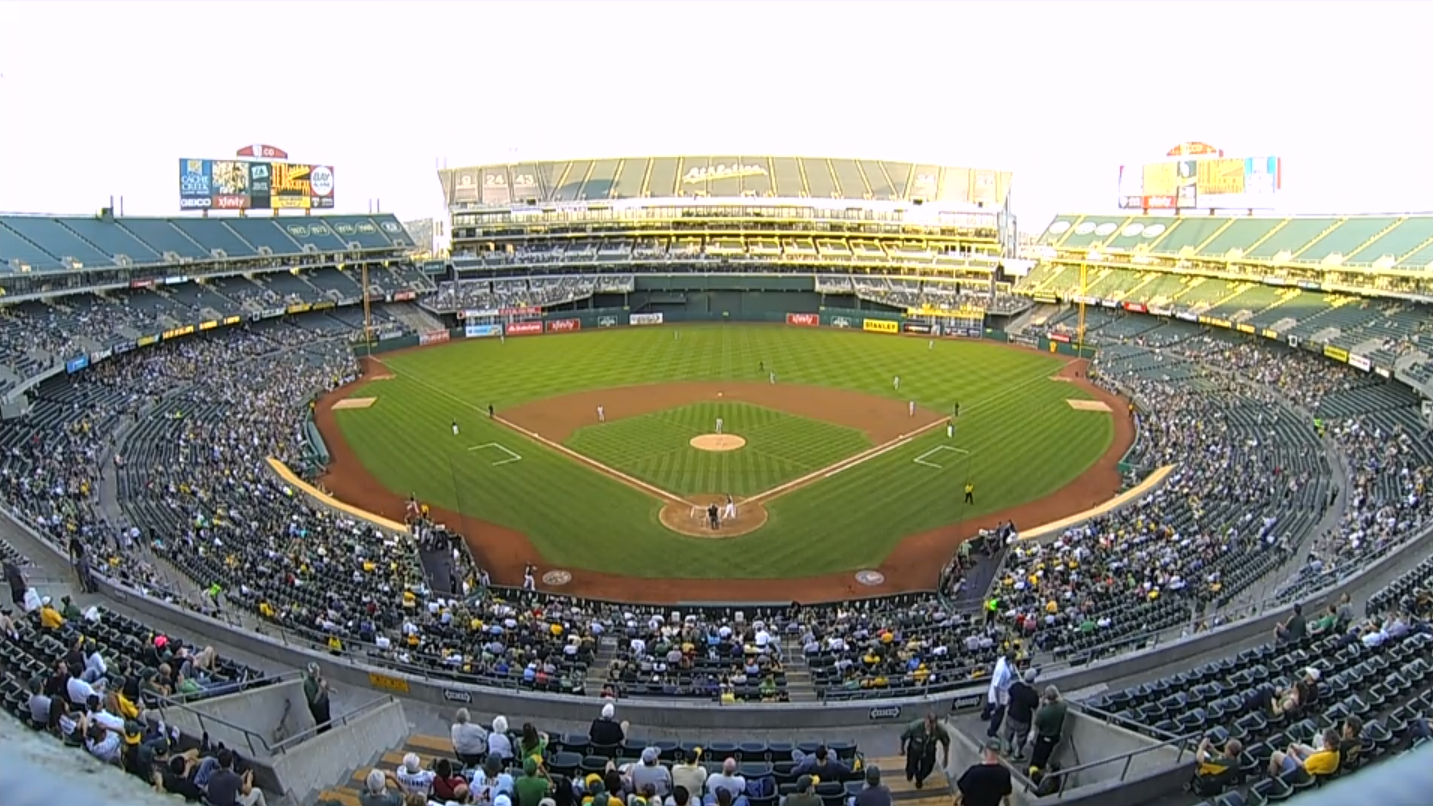 Not only did the White Sox continue to adjust their alignment throughout the series to defend against the bunt with Reddick hitting, but they changed their approach against Oakland’s other resident shift-bunter, Brandon Moss. Here’s the White Sox infield against Moss prior to Reddick’s bunt: 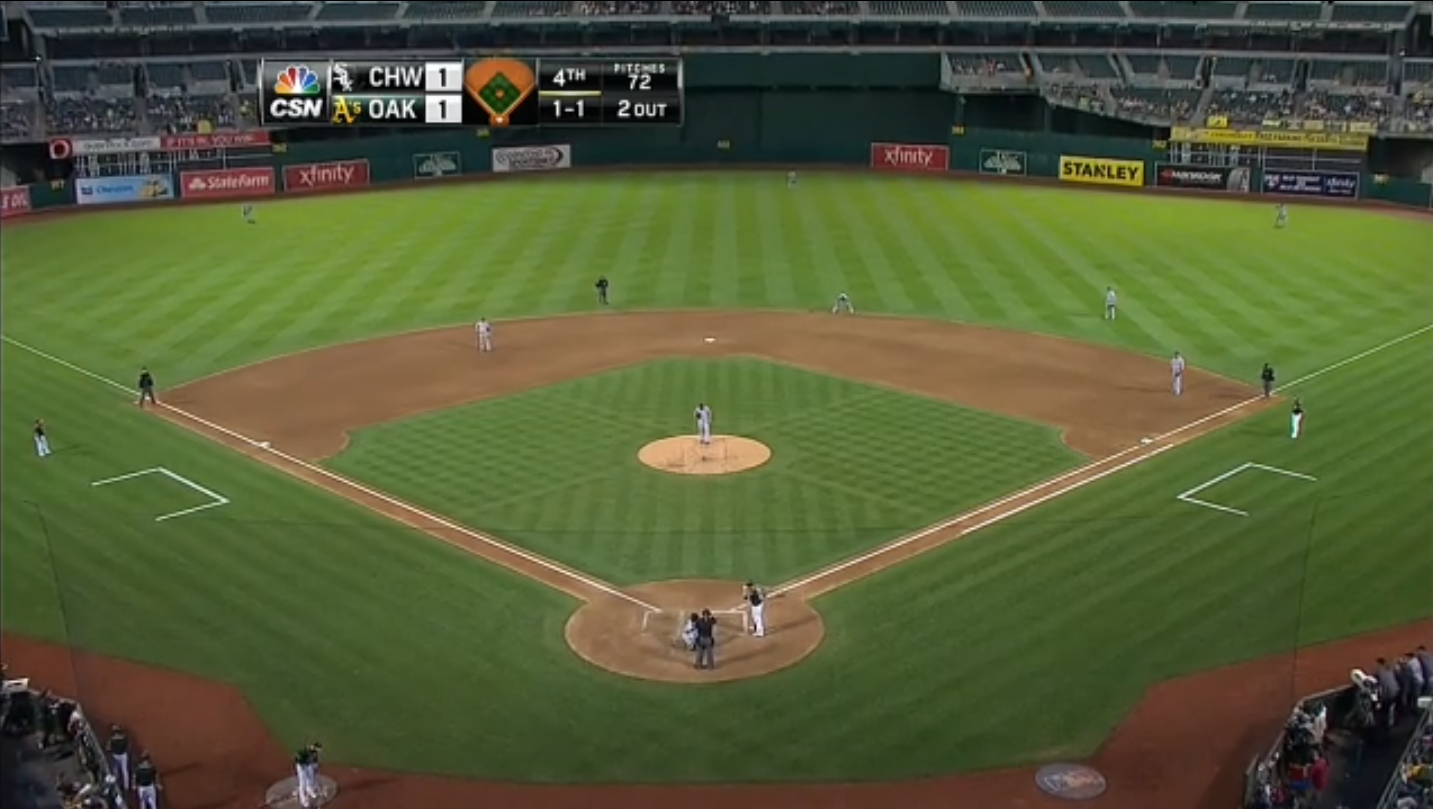 And here is Chicago’s setup the next day: 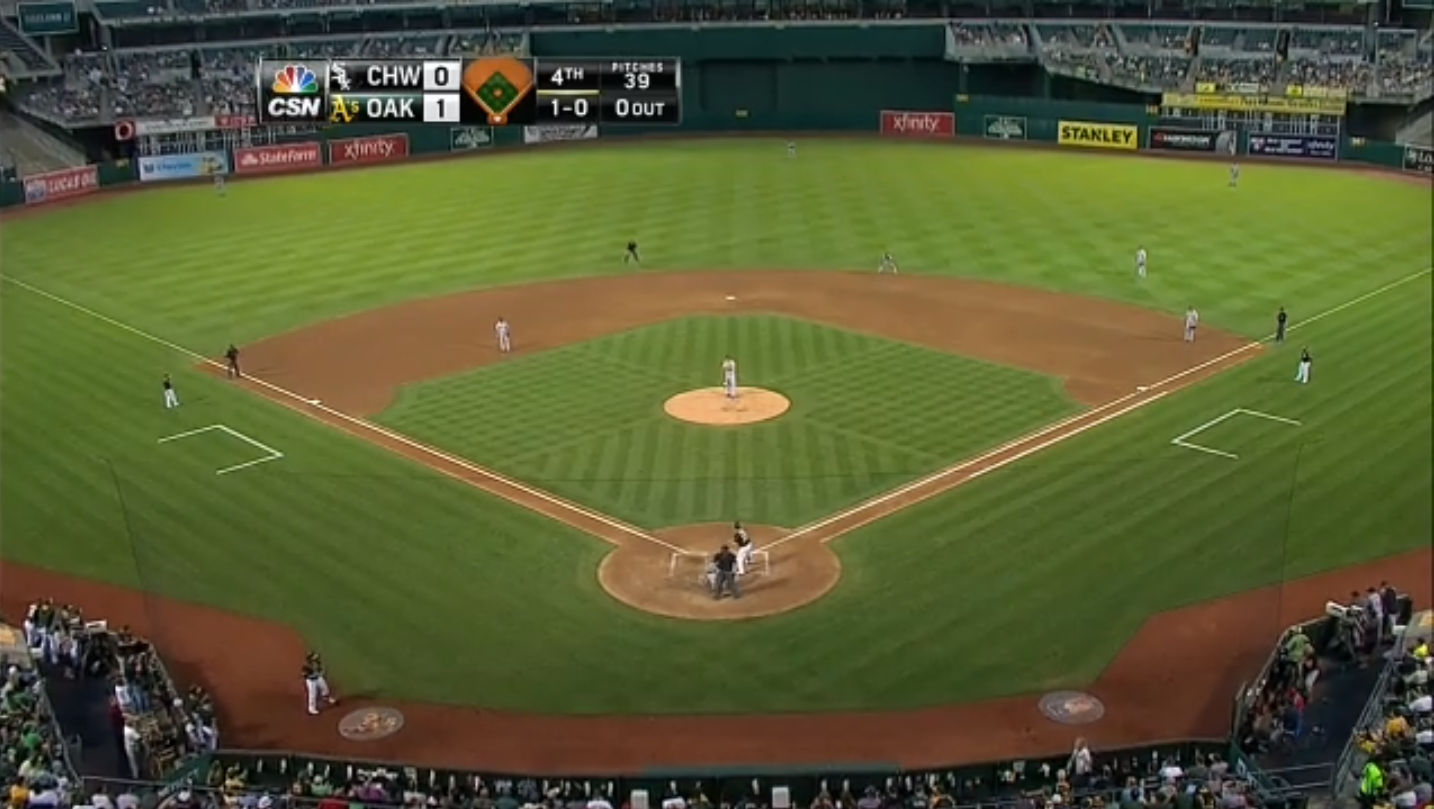 The White Sox were conscious of lefties beating the shift using the bunt even before Reddick’s bunt single, as they protected against Anthony Rizzo a few series prior (before he laid down his two bunts against Cardinals, but after he got a bunt single against a Yankees shift in April). But their defense against the bunt wasn’t consistent during all overshifts, as evidenced by their setup when Reddick laid down his bunt. Another example comes from Chicago’s previous series, against the Diamondbacks, as their defense resembled a typical overshift.

But Reddick’s bunt single was the first time this season that the White Sox have fallen victim to a bunt against the shift themselves (or even had a bunt successfully laid down against the shift), and they seem determined to make sure it doesn’t happen again.

There’s evidence that since that series against Oakland, the White Sox have shaded their third baseman closer to the third-base line during extreme overshifts against Mike Moustakas, Brian McCann, and Mark Teixeira. Here are screenshots against Moustakas and against McCann, and here’s a GIF from last night’s game that shows the third baseman moving back off the line after Chicago got two strikes on Teixeira.

Asdrubal Cabrera
His bunt against Tampa Bay was the last time he came to bat during that series, so we can’t see whether Evan Longoria would have played further in the next time.

Garrett Jones
The Dodgers got the hint after Jones bunted for single in the second inning. Here’s the defense during his next at-bat. —Chris Mosch 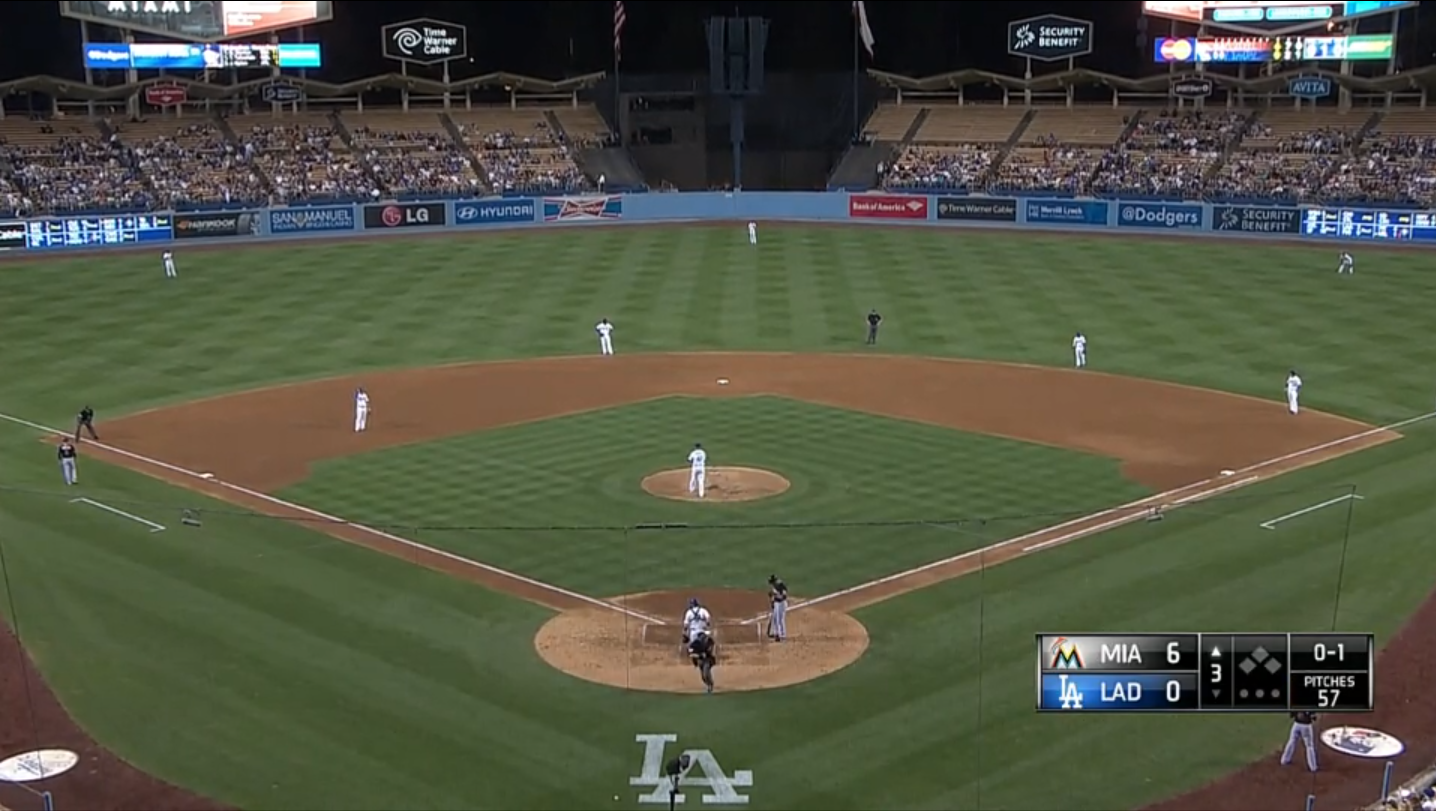 You need to be logged in to comment. Login or Subscribe
BillJohnson
One thing that might be useful to add to these reports is an indication of the score of the game at the time of the bunt. Tactical moves are always made in context, whether by fielders or by hitter (bunter). Knowing that context will aid in understanding how the anti-shift strategy works in practice.
Reply to BillJohnson