There are many reasons why a player’s abilities may appear to fluctuate between seasons. Players get injured, they gain experience, and the league constantly adjusts to their particular strengths and weaknesses in real time. On top of all of the variation in skill, there is also the omnipresent addition of noise, which can make it difficult to perceive any significant shifts in ability.

But whereas the best baseball analysts are limited by the considerable volatility in things like batting average, teams have access to detailed scouting reports and the in-game experiences of some great baseball minds, namely the players themselves. I’ve written about this in my past few articles, focusing in particular on the different ways in which skilled hitters are approached by pitchers. Good hitters are rarely thrown strikes, and when a pitch does find its way into the zone, it tends to be towards the zone’s periphery. Pitchers presumably adopt this strategy in order to prevent good hitters from punishing in-zone pitches. Since pitchers have access to more and better-quality information than the general public, they might be the first to react when a batter’s true skill increases or decreases.

In last week’s article, I showed that rapid and pronounced increases in the distance from zone center (“zone distance” for short) often accompanied breakout seasons. The best example of this was Chris Davis, whose average zone distance skyrocketed in mid-2012, prior to his astounding 2013. These trends lent some credence to the idea that pitchers become aware of breakouts even before the hitter’s stats catch up.

I turn the same logic now to the idea of finding batter breakdowns, or cases in which a batter’s skill suddenly declines below his projections. As it turns out, breakdowns are more heterogeneous and difficult to forecast accurately, which makes some sense. So rather than simply attempting to predict breakdowns, I’ll focus on a series of case studies, or batters with interesting zone tendencies, and how they performed in subsequent action.

Before I examine individual players, let’s first consider the league leaders in zone distance decrease from last year, and how they are performing this year. Here are the top 20. 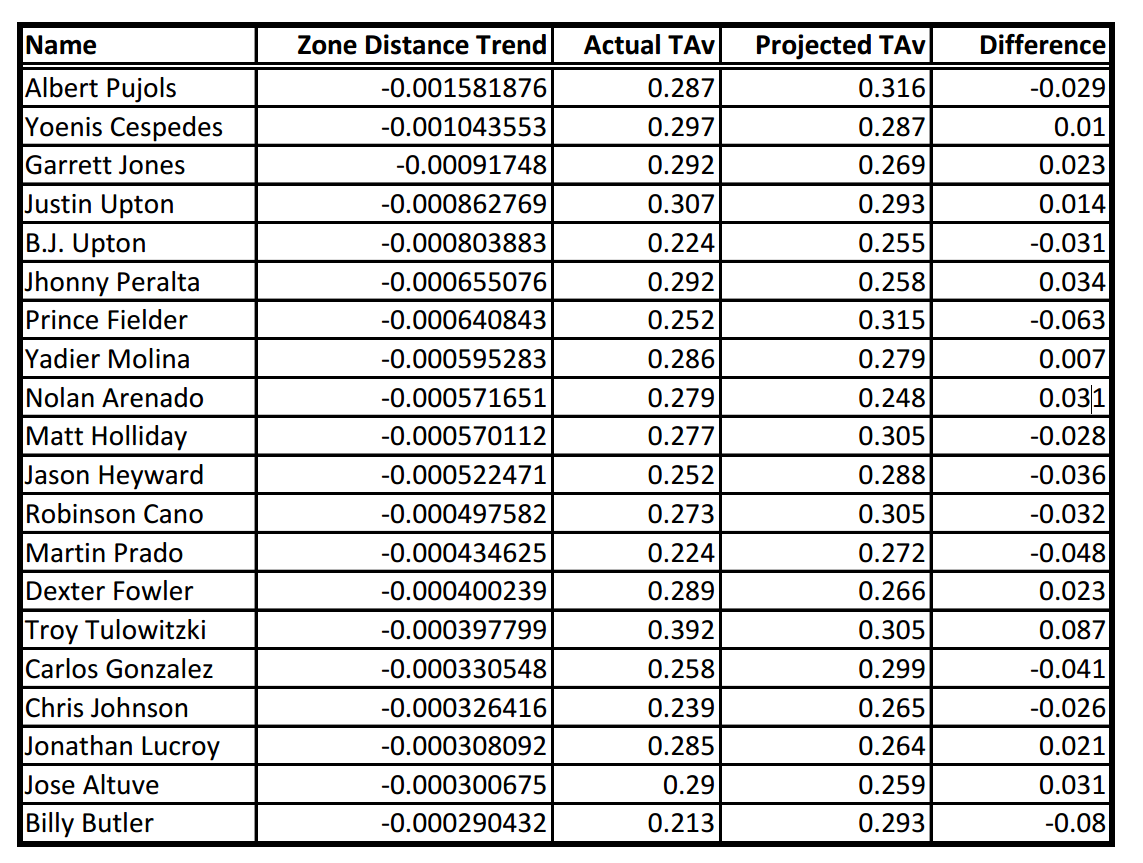 Overall, the list has underperformed the PECOTA projections so far this season by about seven points of TAv (on average), which is statistically unlikely (albeit not quite significant—p=.1). With that said, there’s substantially more variability than I found in predicting breakouts. With breakouts, eight out of the top 10 outperformed their projections for 2013, to the tune of an average .024 increase in TAv (and the other two suffered injuries). This year, so far, seven out of 10 were doing better than their projections. On this, the other end of the list, only 10 of 20 are performing worse than expected, which is what you’d expect by chance alone. The results are similar for the prior year, 2013, as well. For that year, 11 out of 20 underperformed their projections, by an average of 10 points of TAv.

There are some notable successes, including Billy Butler. The sign of his decline was unmistakable. 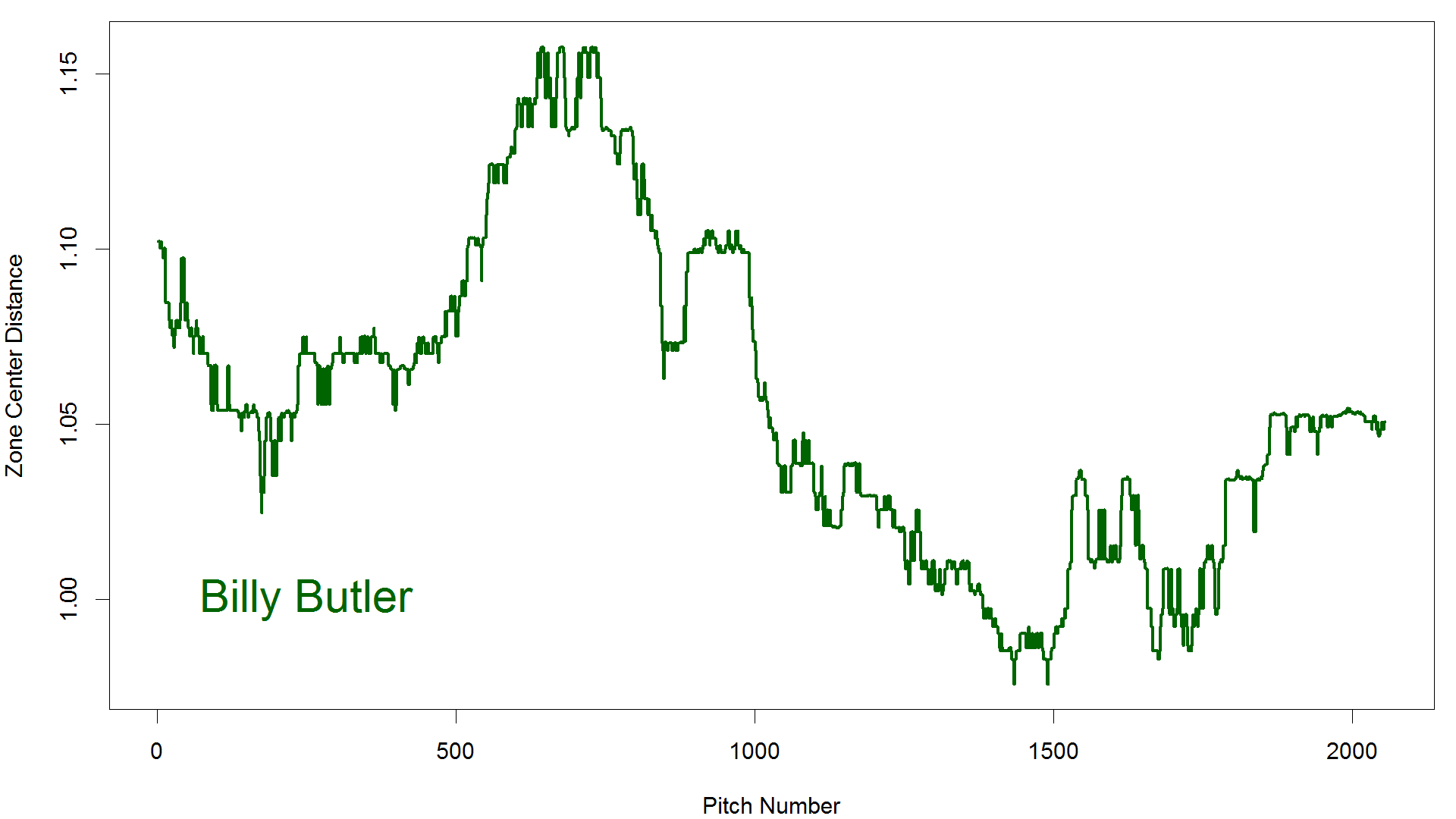 I’m plotting here the smoothed zone distance trend. In this case, pitchers are throwing closer to the zone as the season progresses, indicating that they are not afraid of challenging Butler. Even though the data is noisy—and keep in mind that this is after extensive smoothing—the season-long trend is obvious, and the collapse of Butler’s hitting skill is crystal clear.

There are two other notable and unexpected successes of the method: Robinson Cano and Prince Fielder. Fielder and Cano both had solid resumes and high PECOTA projections, but both have unexpectedly slumped this year. Their zone distance trends in 2013 look like this: 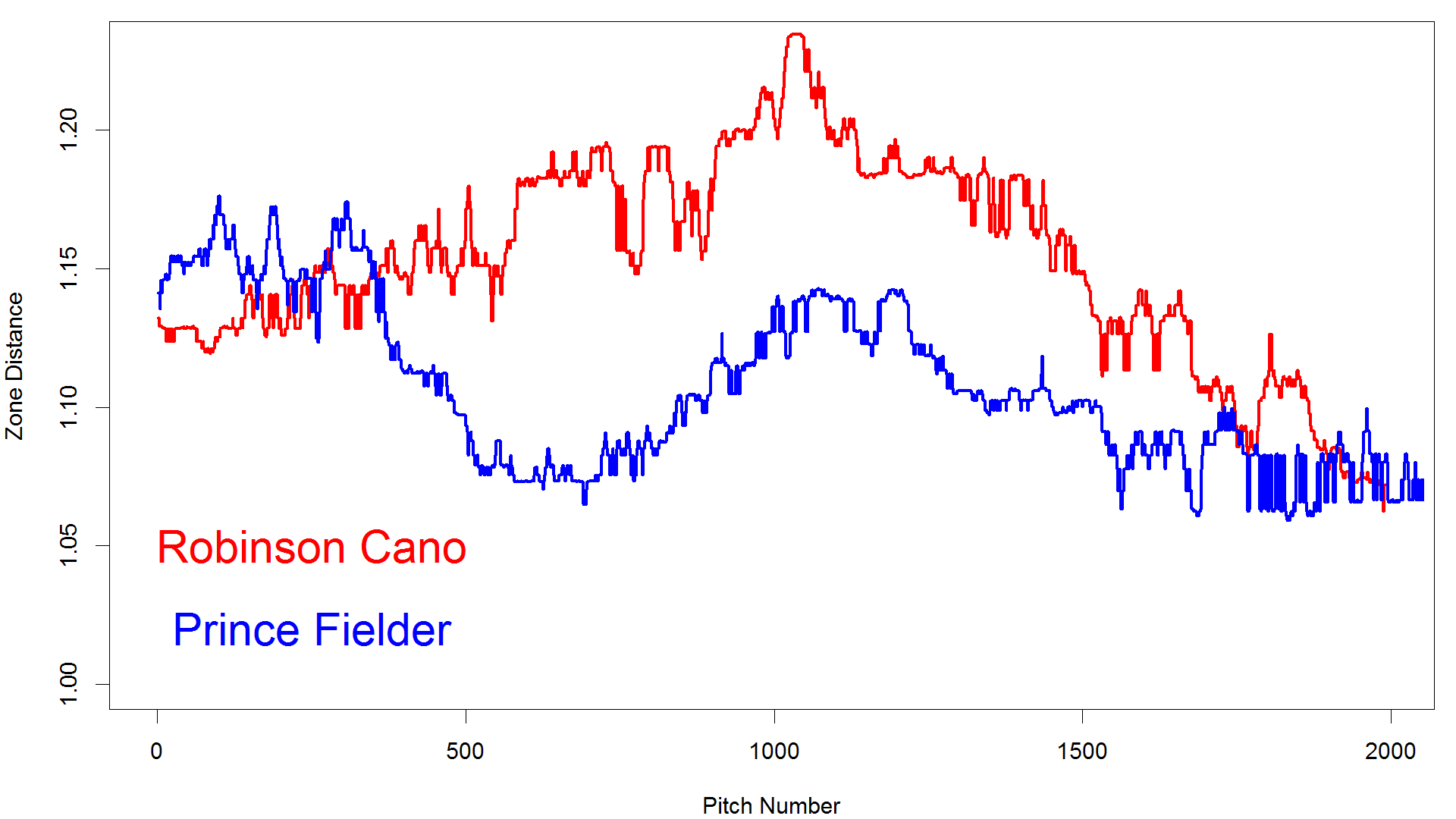 Cano’s zone distance seems to have gone into freefall around midseason. Fielder’s graph is similar, with a bit more oscillation. The reasons for Cano’s power outage are as of yet unknown, but we recently learned something very important about Prince Fielder’s health. Apparently, Fielder has been suffering from a herniated disc for some time, and believes the injury may be responsible for sapping some of his power. Rangers GM Jon Daniels said of the injury, “It sounds like he's probably been dealing with it more than just this year." That notion supports the idea that the zone distance graph was detecting an actual breakdown, even if it occurred via injury and not some mysterious loss of skill, as thus far seems to be the case with Cano. (Side note: Will we chalk this up as another trade win for Dave Dombrowski?)

Let’s address the elephant on the list, the man presently batting .400 and leading an awesome Rockies squad, Troy Tulowitzki. It’s generally not a good sign when the leading MVP candidate appears on one’s list of likely breakdown victims, but in this case, the story is a bit more complex. 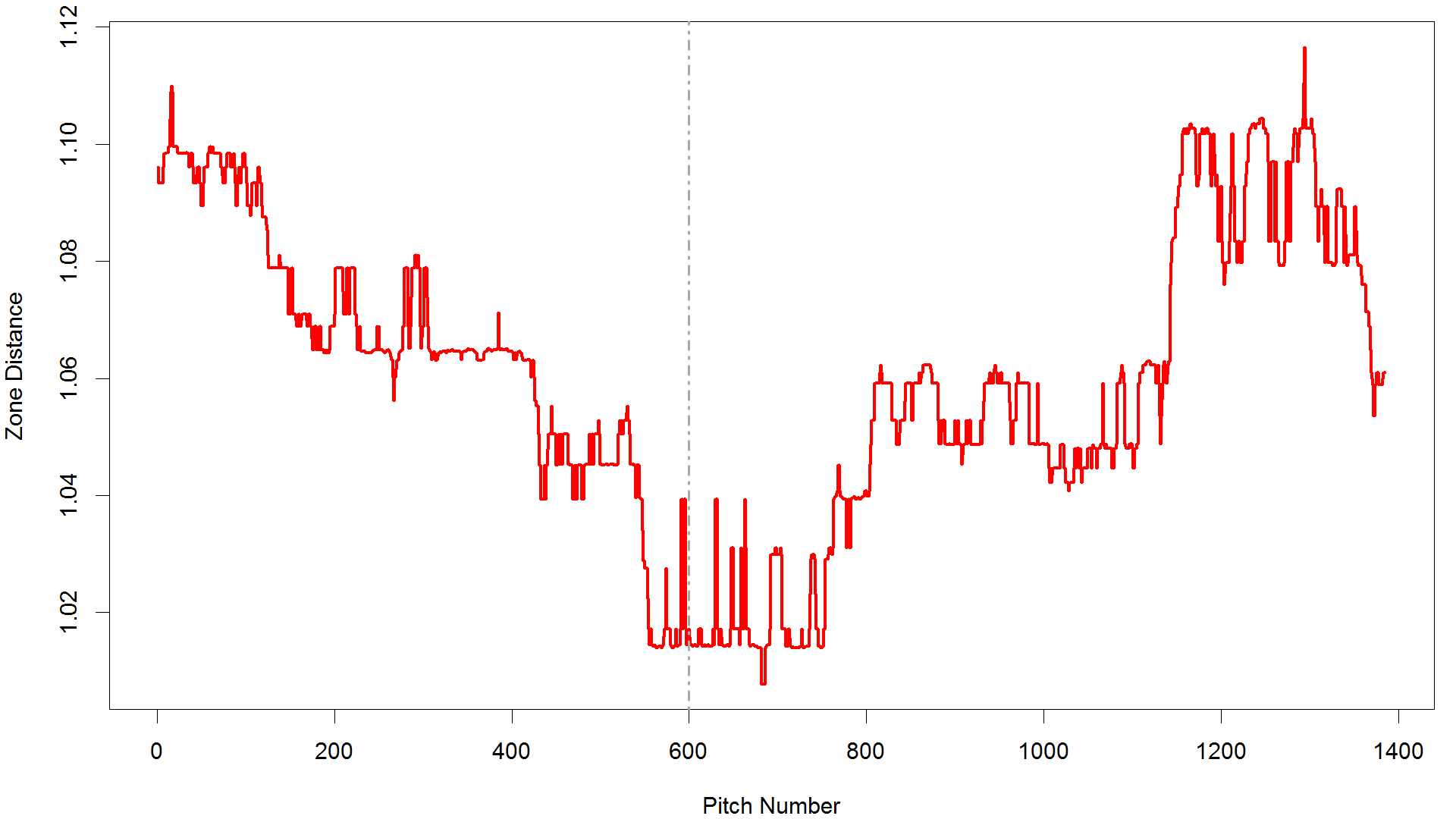 What happened at midseason? The 600th pitch number in the above graph, near the bottom of Tulowitzki’s zone distance, happened on the 28th of July, about two weeks after Tulowitzki had returned from the DL for a serious injury (a rib fracture). Perhaps post-recovery Tulo came back in his new, now-superhuman state. However, since the fracture was incurred on a diving defensive play, the injury does nothing to explain why Tulowitzki’s zone distance was declining before the injury. Unlike Fielder’s, Tulo’s injury was not a lingering, worsening condition.

Another Rockies player on the list with an outstanding performance so far is Nolan Arenado. Arenado’s zone distance profile is similar, in that the latter part of his 2013 season shows a large zone distance increase. 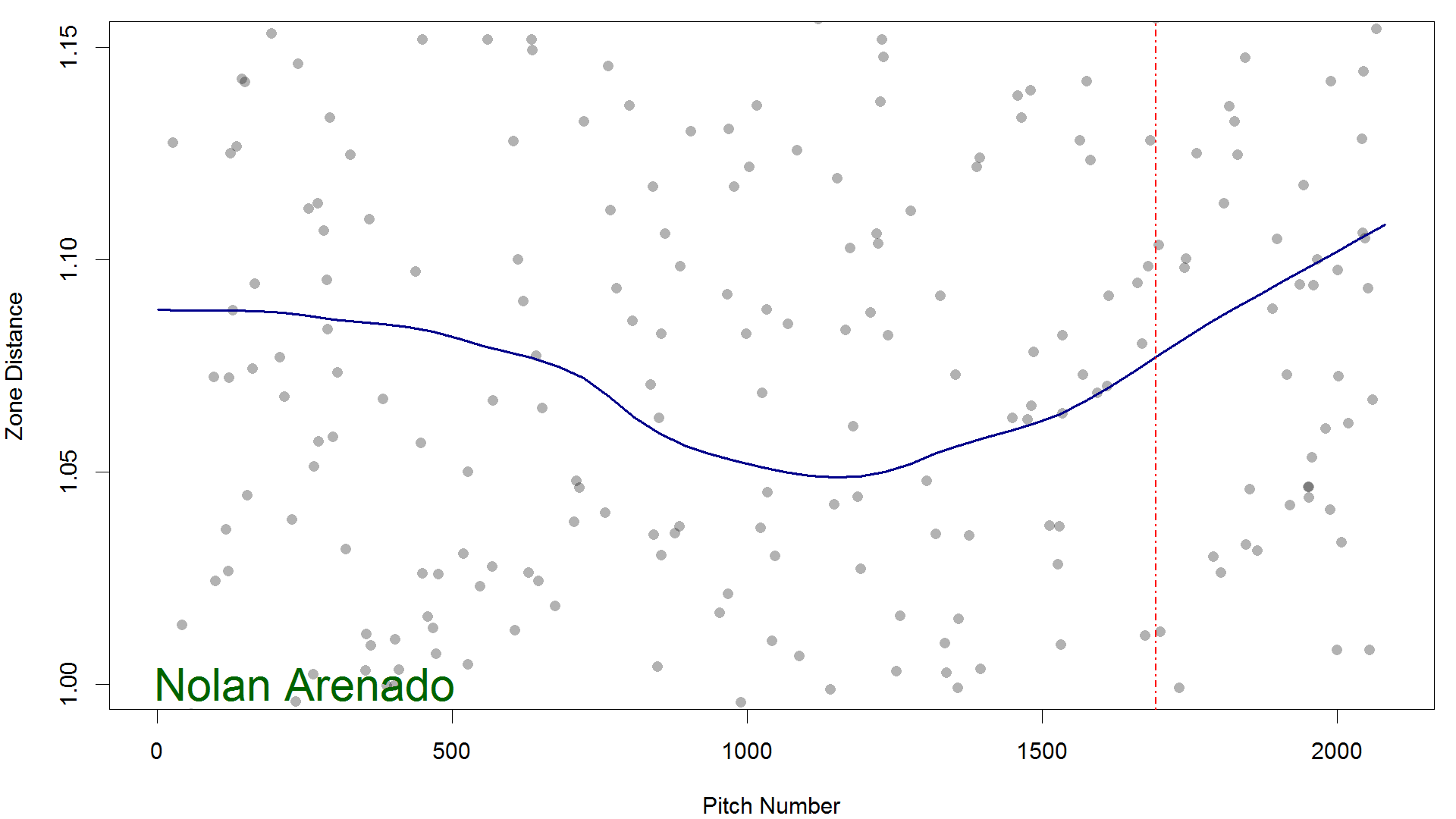 I’ve used a slightly different smoothing method here (LOESS) to better show the trend. The red, dotted line indicates the start of the 2014 season. Even though Arenado’s overall zone distance profile for 2013 was slightly negative, it’s easy to see that the most recent movement is dramatically upward. That movement wasn’t a late-season fluke, as it has continued so far in the 2014 season. Arenado’s graph suggests that in-season zone distance changes could also be useful for determining whether breakout performances are real.

The more substantial variability in breakdown predictions suggest that there are more complex mechanisms at work. One issue I highlighted was the effect of injuries. In the case of Prince Fielder, a lingering issue (a herniated disc) served as a plausible explanation for pitchers’ sudden willingness to challenge him in the zone. Left untreated, Fielder’s impairment persisted into this season and led to a drastic drop in performance.

On the other hand, an injury seems to have changed Tulowitzki’s zone distance trend in a very different manner. While pre-injury Tulowitzki showed classic signs of a decline, post-injury Tulowitzki came back scaring pitchers away from the zone. Taken over the whole year, Tulowitzki’s zone distance declined somewhat, but perhaps his most recent data ought to have been weighted more heavily. The same pattern was also observed with Tulo’s teammate Nolan Arenado, and in both cases, pitchers have continued avoiding the center of the zone so far this season.

Both injury and the complexity of the zone distance trends bespeak the need for a more nuanced approach to breakdown prediction, one that integrates the most recent information about zone distance along with injuries and other factors. In addition, the batter is not without influence. As pitchers challenge a hitter closer to the center of the zone, the hitter finds better pitches to hit. Whether the hitter collapses into a full-blown breakdown or punishes the pitcher’s courage has something to do with his plate discipline and ability to drive down the middle pitches. These factors must therefore also be integrated in order to more accurately predict changes in hitter ability.

You need to be logged in to comment. Login or Subscribe
PeterCollery
Could just be me, but I'm not seeing the graphs.
Reply to PeterCollery
bornyank1
Showing up okay on my end. Try refreshing.
Reply to bornyank1
lyuchi
Cool piece. Do you have this data across seasons? Might make me cry, but I'd love to see Jeter's aging deterioration since '09 in such a neat graph.
Reply to lyuchi
nada012
yeah, for sure. I did a piece on Albert Pujols a couple of weeks ago, and Jeter would make another interesting study.
Reply to nada012
jfranco77
Since the Rockies are hitting about .550 as a team at home this year, could pitchers just be working away from all of their hitters a little more?
Reply to jfranco77
nada012
Not all Rockies hitters are being given the same treatment this year. Some aren't being avoided as much, despite the outstanding team results. I'm planning to write more about this soon.
Reply to nada012