Last month I started a season-long series (continued here, here, and here) devoted to tracking bunts for base hits with the infield shift in effect; this is the fifth installment. To bring you up to speed on the series’ premise and methodology will take but two brief excerpts. Excerpt one:

And now you’re caught up. I took a break from the series last Friday because the week before had been a slow one in the world of bunting to beat the shift, so today we’ll cover the games of May 1–14, with the list of bunts against the shift again supplied by Inside Edge. We have several new bunts to talk about, as well as the important addition of attempted bunts against the shift and BP intern Chris Mosch’s weekly look at whether teams have been adjusting their defensive alignments against batters who’ve burned them before. How’s that for a hook?

This isn’t an extreme shift, but the third basemen is playing over and back, and Hosmer isn’t a habitual bunter. It looks like he planned to bunt the ball toward third but was jammed by the pitch, which was well inside.

Cabrera has laid down three bunts against the shift in 2014, and he has three singles to show for it.

Reddick is also an experienced shift-beating bunter. Here he has almost half the field to work with, so the only question was whether the ball would stay fair.

Nice try, Brian, but you have to get up pretty early in the morning to get a bunt past Bartolo “Quick as a Cat” Colon. Early enough that he’s distracted because he hasn’t had breakfast.

Given Votto’s much-ballyhooed cerebral approach at the plate, you’d think he’d drop down bunts often, but this is the first one we’ve tracked. In this case, there was a runner on first with two outs, which isn’t the best bunting situation. On the other hand, Votto discovered a new way to make people angry about the fact that he’s more interested in getting on base than recording an RBI.

Just like the last time Jones tried it, there was no doubt off the bat that this bunt would be a hit.

Joyce squared around early and directed the ball right out in front of the plate, which made this look more like a sacrifice than an attempt at a hit.

Those totals aren’t typos: bunts against the shift are up 100 percent since last season and 500 percent since 2012, even though I’ve been conservative on borderline cases. I asked IE’s Kenny Kendrena whether it’s fair to make cross-season comparisons, or whether IE’s charting methods have changed enough to make those comparisons suspect. Here’s what he said:

That does seem like a big increase, but we haven’t really changed anything except for our charting software. The new charting app prompts for a shift entry on every play if one is not entered (even if it’s “none”). The old software did not. I’d like to think we nailed all of the bunt-against-shifts in the prior years, though, just based on the emphasis we place on getting all of them.

In other words, this looks like a real trend.

From now on, I’ll also be including a list of threatened/attempted bunts from the past week that led to fouls or taken balls or strikes. Eventually, we’ll have a large enough sample to say something about how often bunt attempts give birth to bunts.

I also received reports of foul bunts by Brandon Belt, McCann, and Jarrod Saltalamacchia from the previous week, as well as another fake-out by Ortiz, but those came before IE began to record such events. For those of you wondering about the whereabouts of the two successful bunts by Anthony Rizzo on Thursday: we’ll cover those next week. This week’s batch of bunts runs through the day before that. —Ben Lindbergh

After the (Bunted) Ball
Here are Chris Mosch’s reports on how defenses adjusted (or didn’t adjust) to the six bunters from last time:

Jed Lowrie
There wasn’t much to pull from the rest of that game, and the next day, he hit from the right side except for one at-bat (which I wasn’t able to pull anything from). I have shots of Houston playing Lowrie straightaway on Sunday, but the Astros tend to align their defense differently according to their own pitcher (and both the shortstop and third baseman are playing straightaway), so I’m hesitant to say it was because of Lowrie bunting. Here's a screenshot of Lowrie doubling down the line in his first at-baton Sunday (you can see the second baseman playing straightaway in the next at-bat against the same pitcher with the bases open). 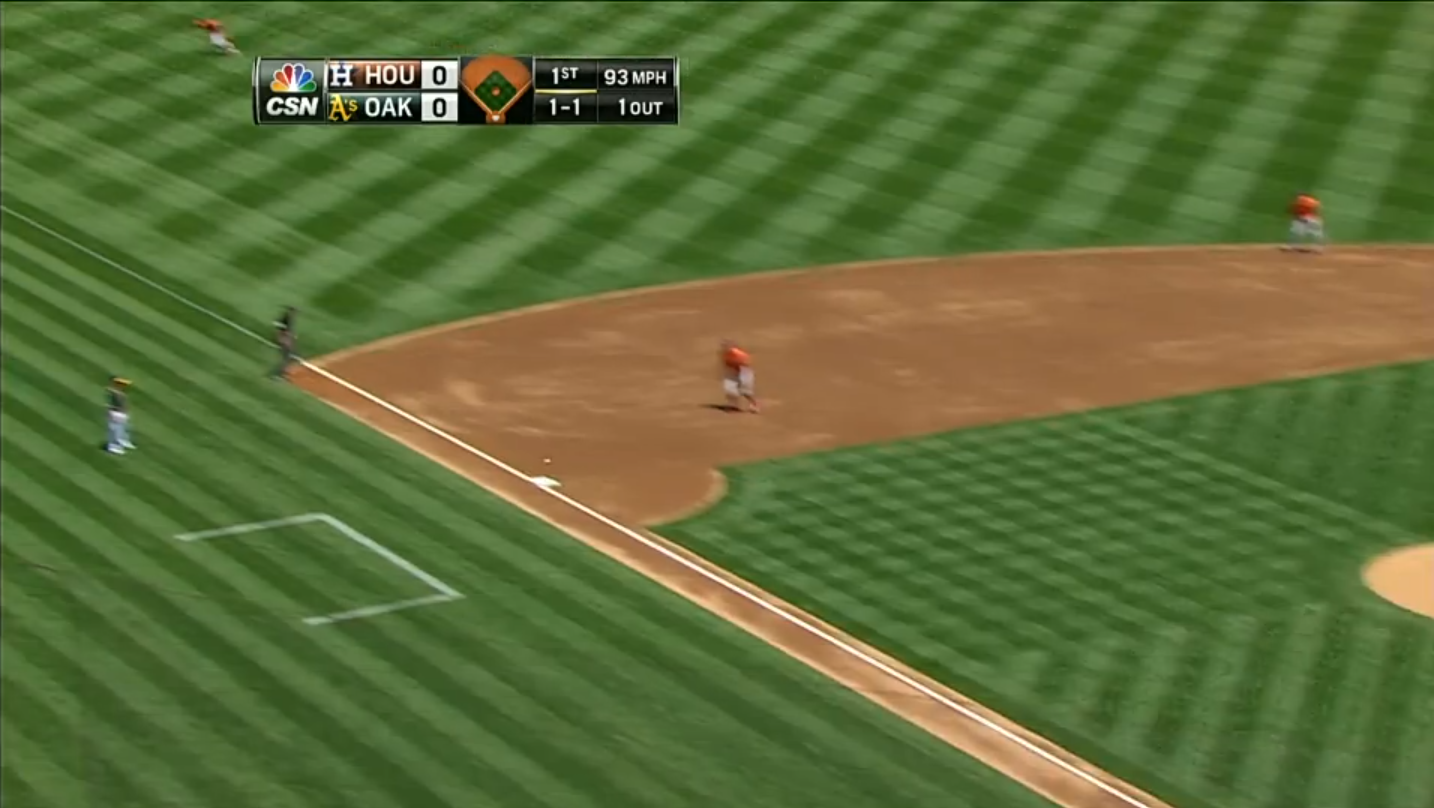 Matt Carpenter
Pedro Alvarez was playing in basically the same position during Carpenter’s next AB.

Ian Stewart
There weren’t really any shots of the infield alignment during Stewart’s first two at-bats on Sunday. During his third at-bat, there’s a shot of Jeter playing in at third base. 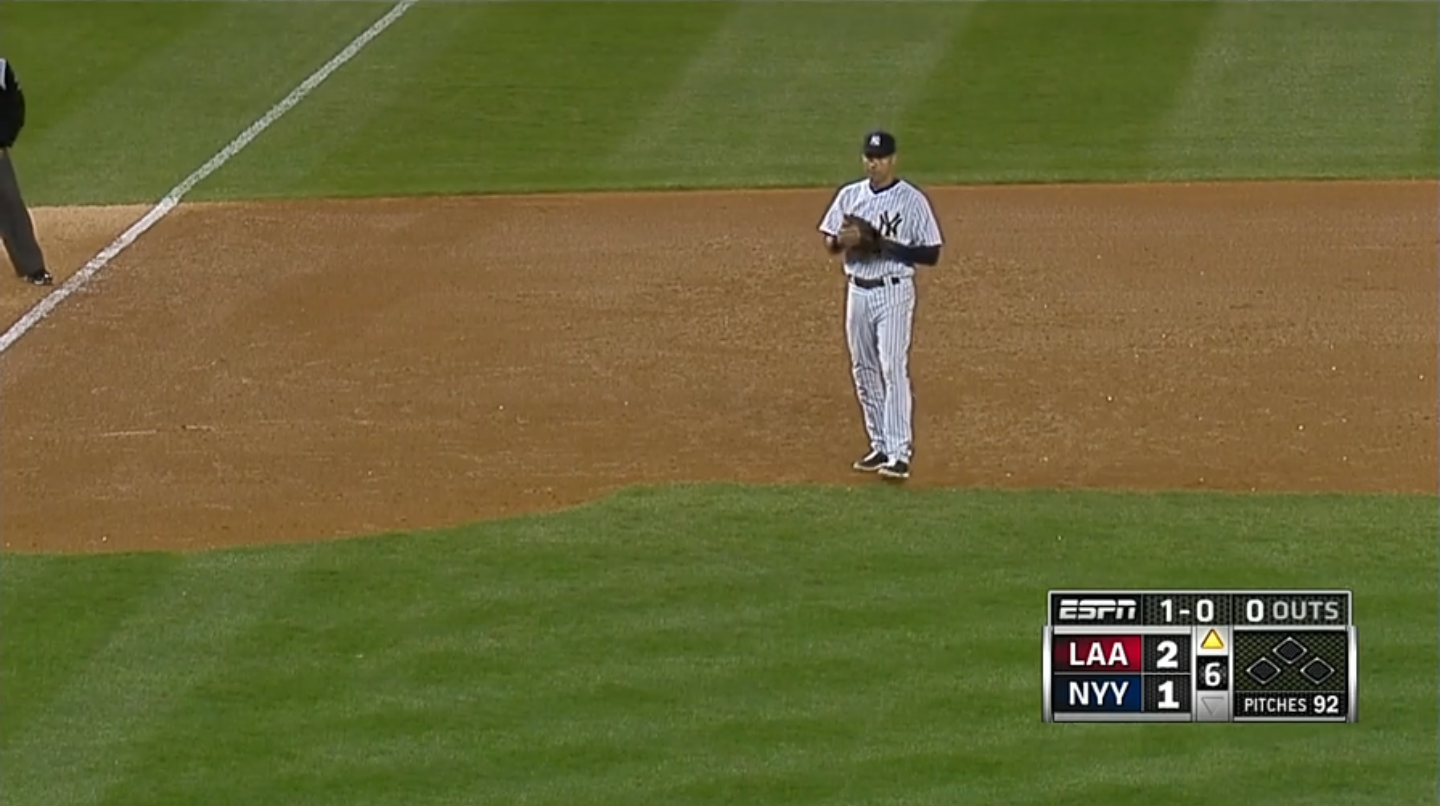 During the fourth at-bat, there’s a clear shot of the infield. The Yankees played Stewart similarly during last week’s series. Here’s a shot from Stewart’s first at-bat on Monday. 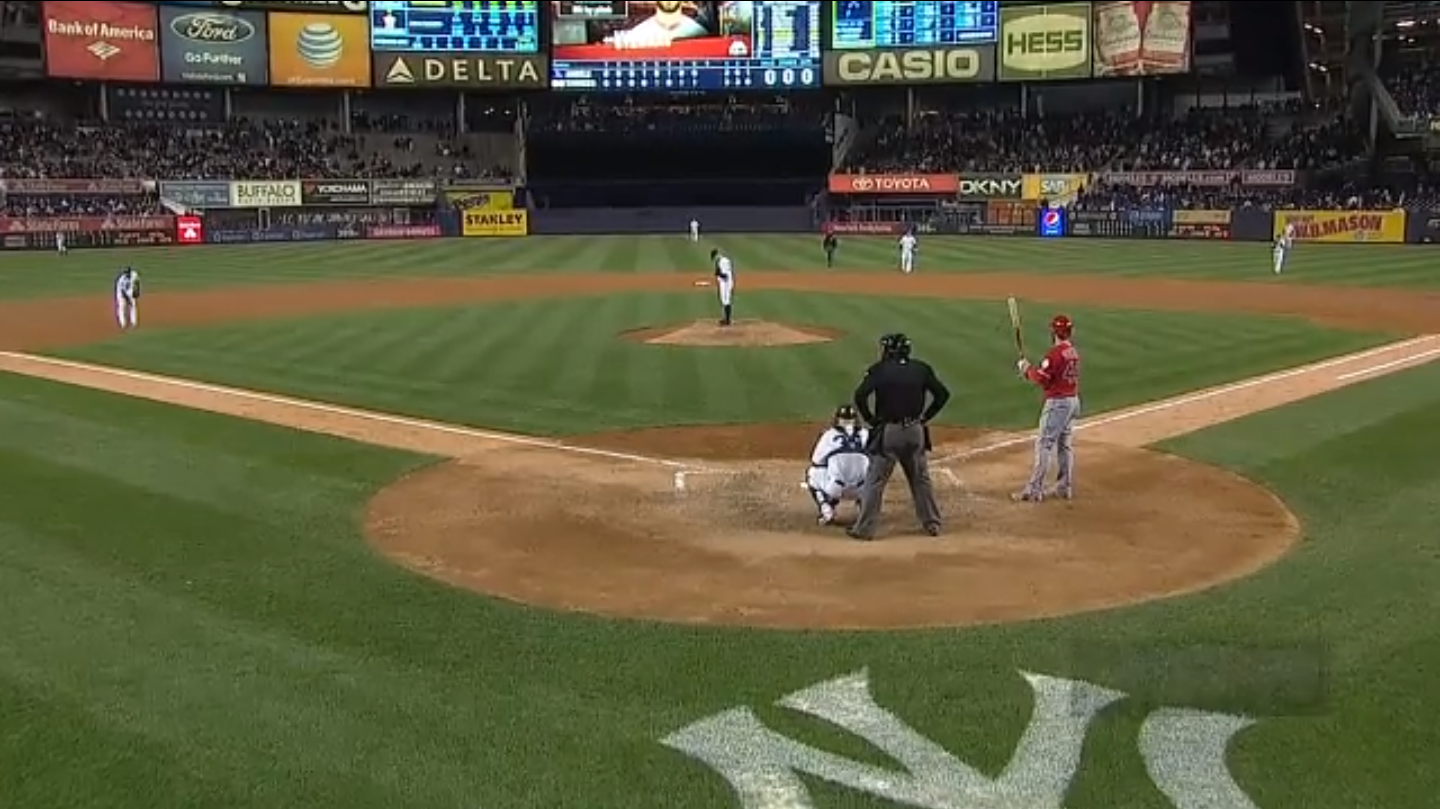 Asdrubal Cabrera
Here’s a screenshot of David Freese playing on the grass during Cabrera’s next at-bat. 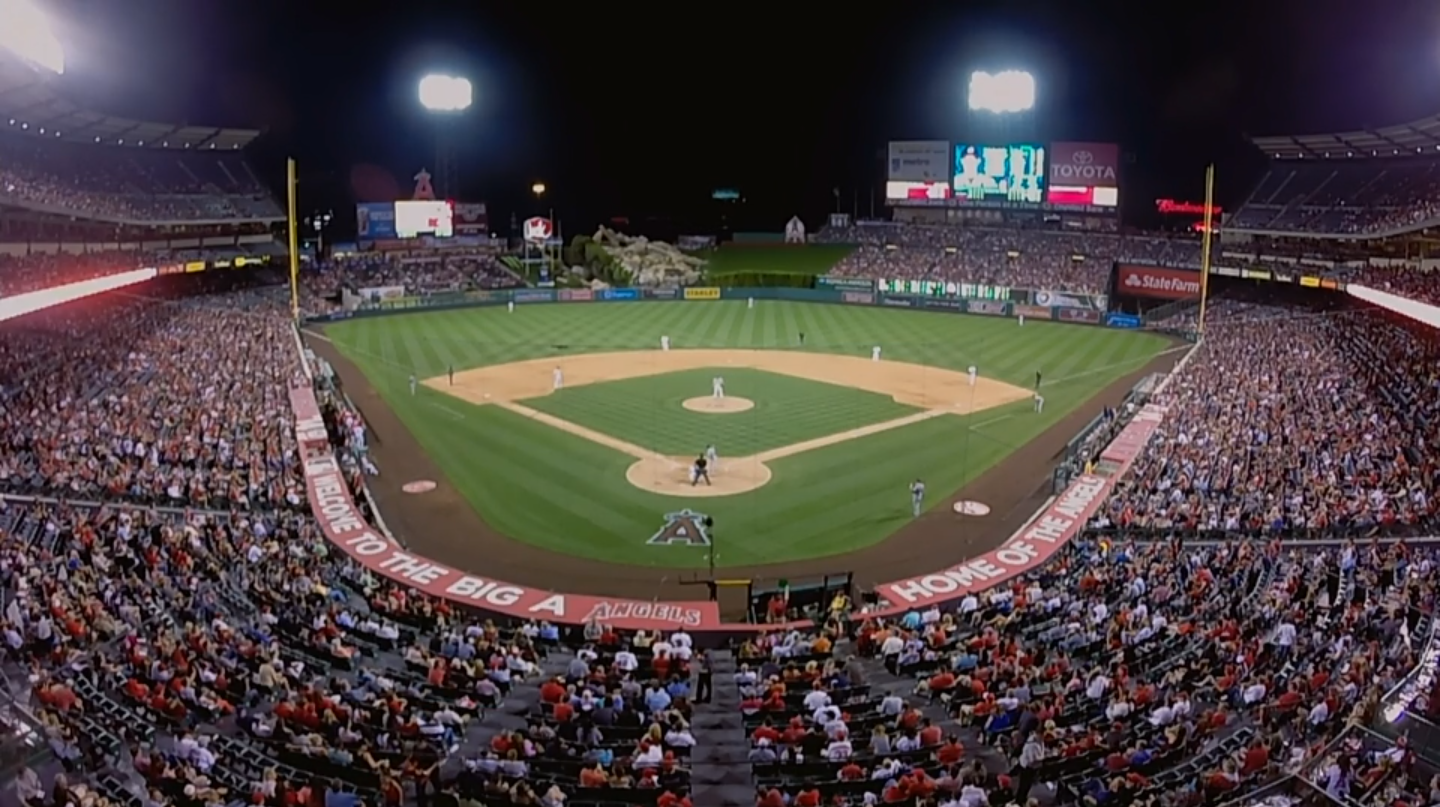 Carlos Santana
Freese played closer to the line and almost on the grass during Santana’s next at-bat. With Santana’s history of bunting against the shift, it looks like other teams are catching on. [From the left side, Santana has the highest “pull angle” of any left-handed hitter with more than 20 grounders from 2011–14: 24.0, where 0 is straight up the middle and 45 is directly along the right-field foul line.—Ben L.] The White Sox played against the bunt during Cleveland’s next series. During Santana’s third at-bat in game two, the camera shows Marcus Semien moving back to his regular position after the second strike. Here’s a GIF:

Carlos Gonzalez
I made a GIF of the cat-and-mouse game between Arizona and Gonzalez. Arizona defends against the bunt to start the next at-bat, but after Gonzalez takes strike one, Eric Chavez moves back. Gonzalez shows bunt the very next pitch and pulls back for strike two.

During the third at-bat, Chavez is positioned on the grass (screenshot below) and stays there until there are two strikes on Gonzalez (you can see him jogging over, but it’s in the background when they’re showing a fan’s sign, so not as great a GIF). —Chris Mosch 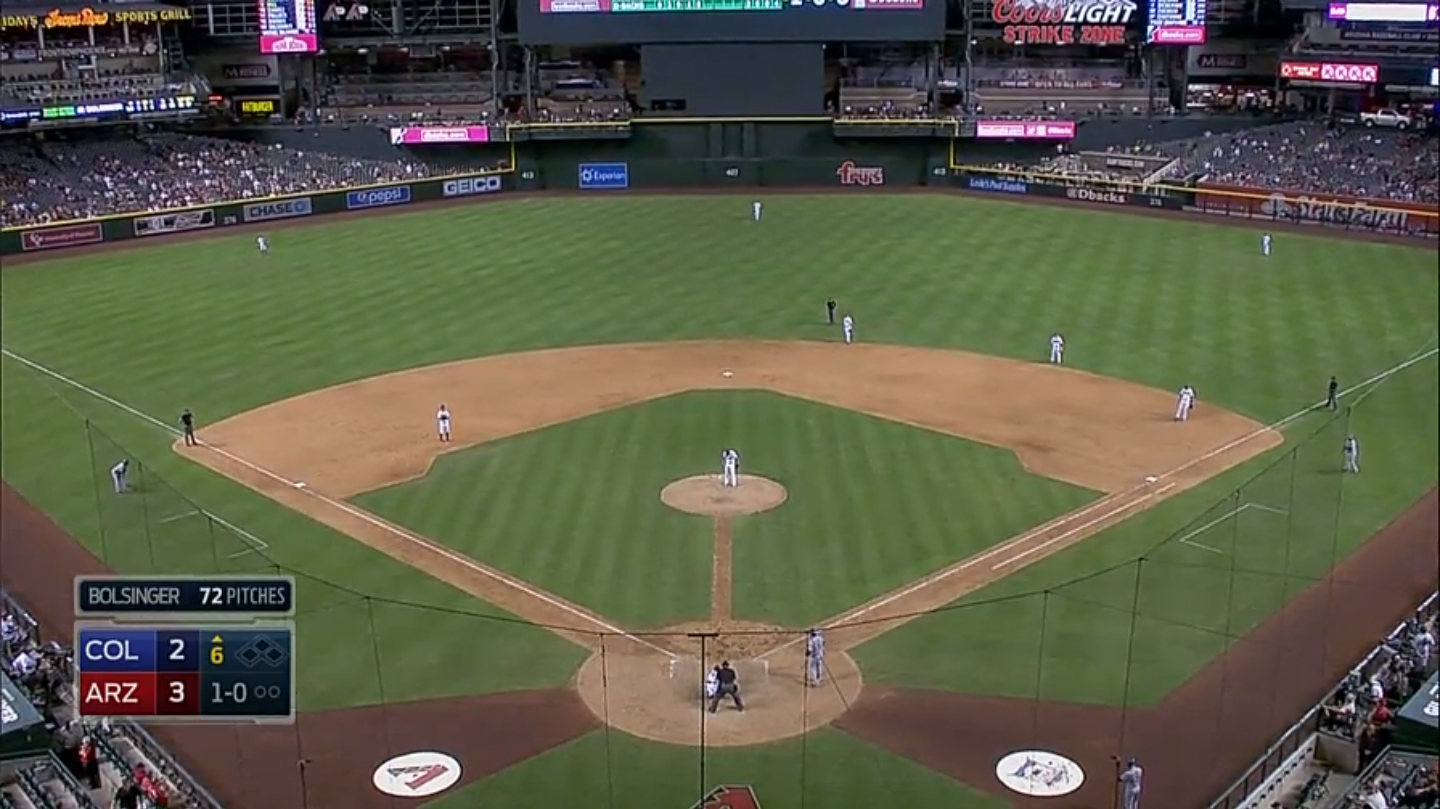 You need to be logged in to comment. Login or Subscribe
mschieve
Anthony Rizzo did this twice yesterday. He was happy to basically take his free base.
Reply to mschieve
oldbopper
Hosmer's bunt wasn't against any shift! The 3rd baseman playing deep absolutely does not constitute the shift. That has been routine since 1876, I should know, I saw it!(LOL) If I may be so bold, I think the shift, for this discussion, should only include instances in which 3 defenders are playing to the right of 2nd base. You should erase this from the statistics.
Reply to oldbopper
oldbopper
As this evolves I think that the defense will station the defender on the left side in the traditional 3rd base position, or even in some. This might, however, lead to more attempts to go the other way because hitters who think bunting is only for wusses would not have that stigma attached to it.
Reply to oldbopper