On June 5th, 2013, Mike Aviles came up to bat in the top of the ninth with his Indians trailing the Yankees by two runs. With Joe Girardi watching anxiously and Mariano Rivera warming in the bullpen, CC Sabathia was working hard to go the distance. Sabathia had been roughed up a bit, but he was commanding his fastball well. He had managed to keep the complete game in reach by allowing only one walk and striking out eight hitters through as many innings. 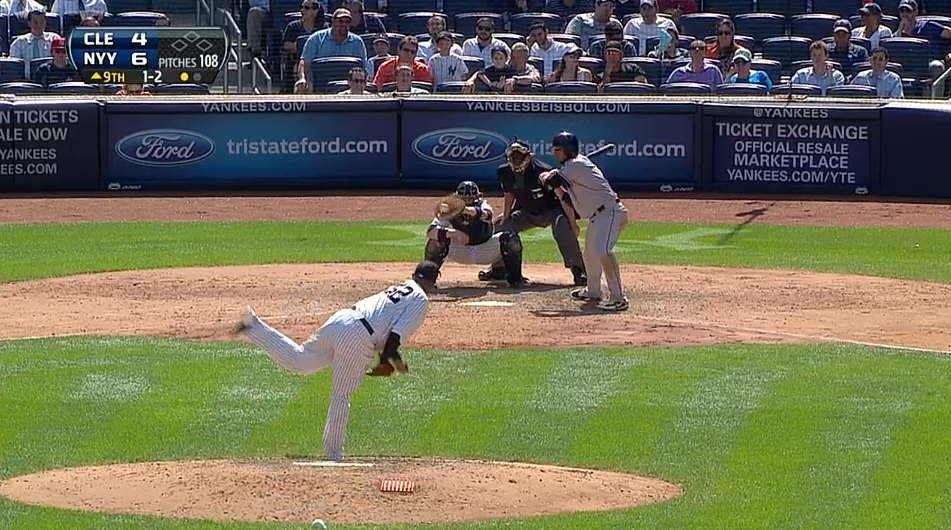 With the count even at 2-2, Yankee catcher Chris Stewart set up in the exact same location as he had on the previous pitch. Sabathia threw a fastball that was an inch or two closer to the strike zone than the previous one, and Aviles took it once again—for a strike. Michael Brantley, the last hope for a Cleveland comeback, grounded out to end the game. 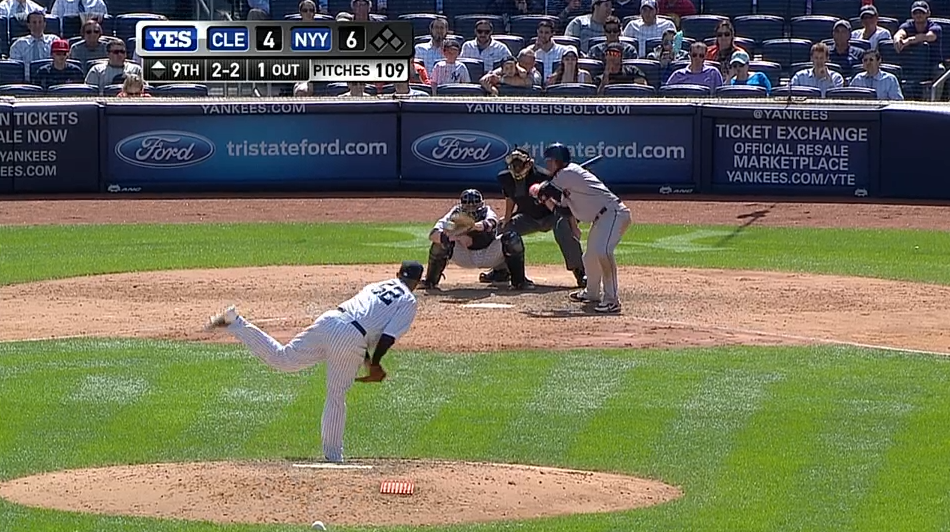 Aviles had violated an important rule to hitting with two strikes—don’t take two close pitches thrown to the same location. This pitch was outside, but it became strike three. As Aviles walked back to the dugout shaking his head, YES Network gave us this overhead view of Chris Stewart’s glove as he caught the pitch: 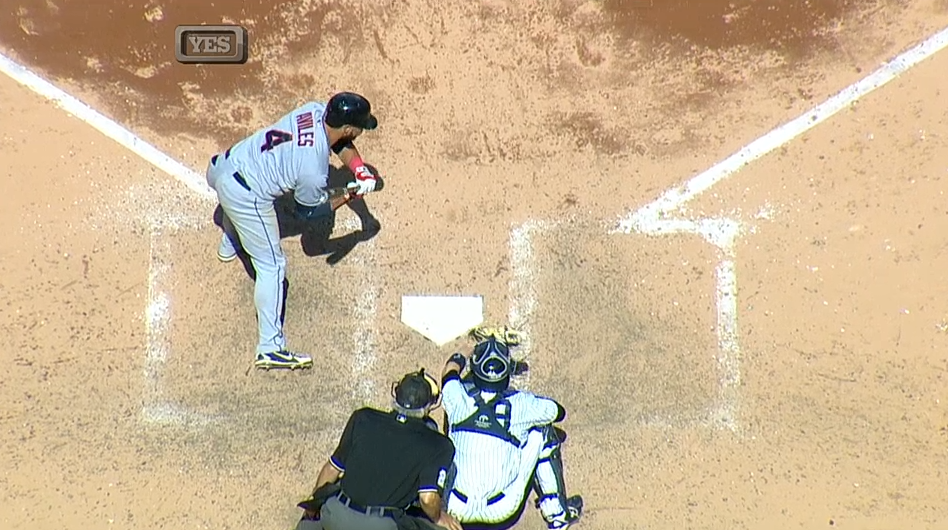 This fastball obviously wasn’t a strike. But hey, that’s baseball; sometimes pitches that aren’t strikes are called strikes. This pitch wasn’t far away from the called strike zone, but it was closer than the pitch before it. Maybe Sabathia is a master of deceiving umpires and knew that he could force Larry Vanover’s hand.

Wait a second—am I saying that the location of Sabathia’s fourth pitch influenced the home plate umpire’s next call? It certainly is possible (and even likely) that one call can have an effect on the next one—especially when the two are made on comparable pitches. Let’s look into it.

The Amorphous Strike Zone
One thing that PITCHf/x has taught us is that the called strike zone is anything but the grey rectangular box you see drawn on ESPN broadcasts. In fact, the area and shape of the called strike zone change with every pitch. Thanks to Jon Roegele, we know that the strike zone shrinks in size when a hitter has two strikes on him, and that it grows with each out a pitcher records in an inning. Umpires also develop biases favoring the home team and pitchers with a reputation for hitting the corners of the strike zone.

Umpires like to be right, but they also like to be fair. At times, we see consistency traded for fairness. If an umpire blows an obvious call in favor of the away team, we might assume that he will make up for it with a call made in favor of the home team. The “make-up” strike call may not be the correct one, but it rectifies a previous mistake.

I’m going to make another assumption here—that home plate umpires have short memories. Baseball players are taught not to dwell on mistakes. Just as the game’s most consistent players don’t let a booted ground ball distract them from their next at-bat, the game’s best umpires shouldn’t let a blown call roll over to impact the rest of the game. Hitters have the ability to review calls in between at-bats, but home plate umpires remain on the field for the entire game. Home plate umpires also must make anywhere from 200 to 300 calls over the course of a three-hour period, leaving little time for any type of in-game review or reflection.

So, if indeed umpires make situational mistakes, and if indeed they do have short-term memories, shouldn’t we see them make a lot of short-term, situational mistakes? It’s much easier to remember the last call you made than it is to remember what the count is, or what inning the game is in. Consequently, I’d expect previous calls to have a greater effect on ball/strike calls than the other effects I’ve mentioned.

The Effect
For this article, I’m really going to simplify things. With the Aviles at-bat in mind, let’s look at fastballs thrown to the outside third of the plate. I pulled all situations in which a fastball thrown to the outside edge was followed by another fastball thrown to a similar location over the last five seasons. I excluded the bottom outside corner, because it would make sense to compare one of these pitches only to another thrown to that same corner. We don’t care about pitch height as much as we do about horizontal location here.

I’m also looking only at pairs of pitches that were taken by the hitter. Hitters often swing at the second close one, so this last criterion narrows the sample size quite a bit (down to 2,363 pairs of pitches thrown to right-handed hitters). A final concern I should address: “Aren’t you going to control for the count and the game situation?” No, not yet—but the sequel to this piece will.

For now, let’s try a visual approach. The images on top plot the first pitch of a consecutive pair of edge fastballs, and the images below plot the second pitch. Think of each (the top set and the bottom set) as one plot split according to the call made by the home plate umpire. 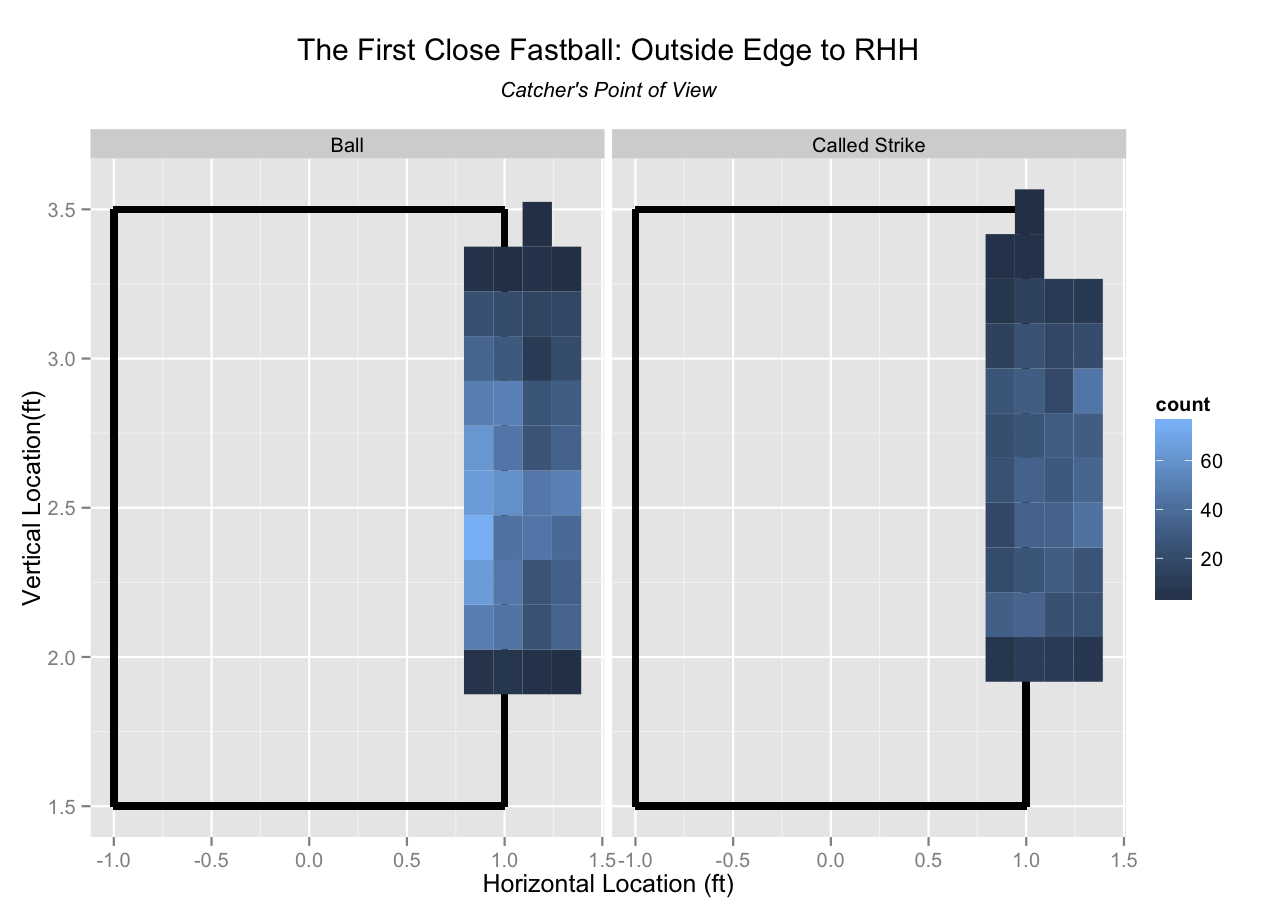 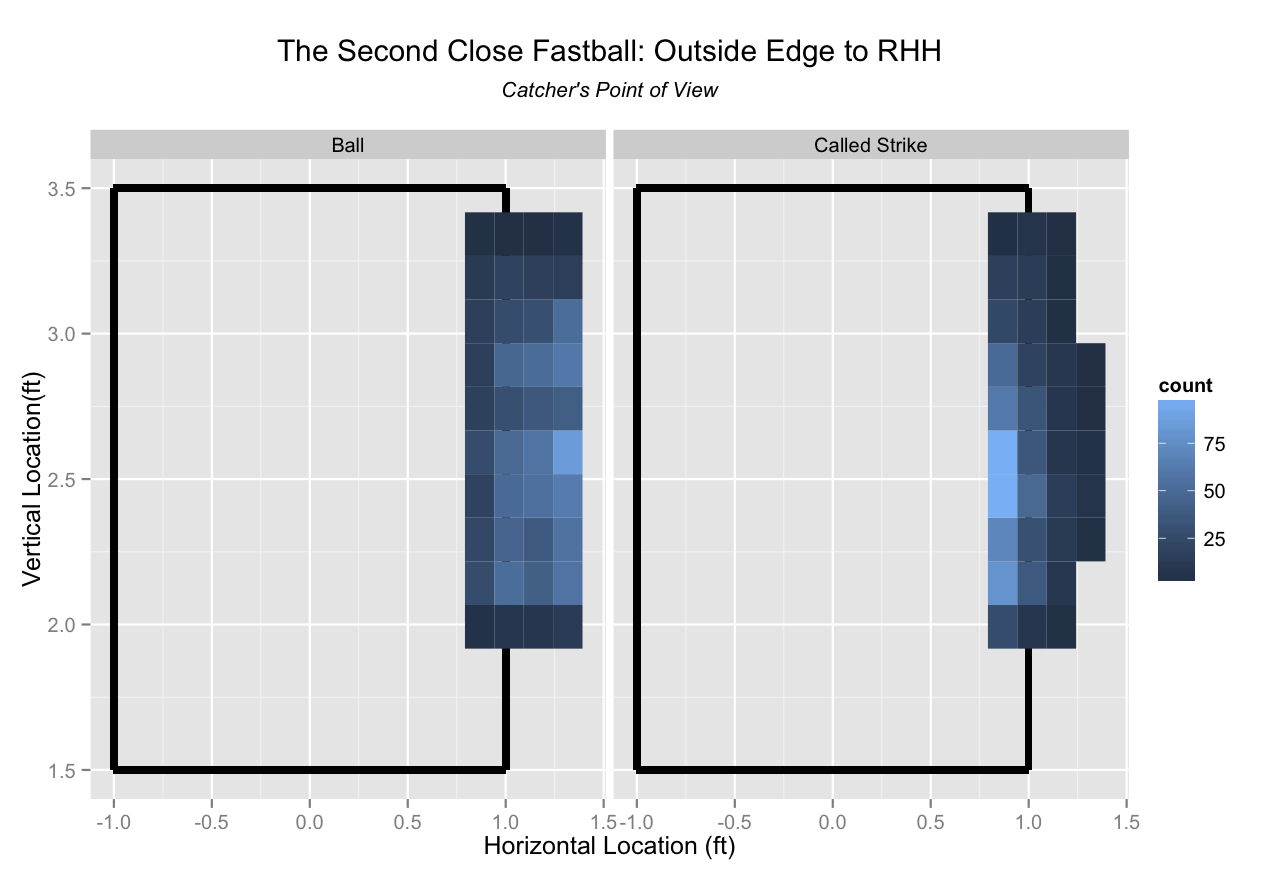 Comparing the two, the effect appears to be pretty remarkable. Each set of plots counts the same number of pitches (with roughly the same number thrown inside and outside the zone each time), but the distribution of ball/strike calls by locations changes dramatically after the first close fastball. In fact, it looks like umpires make better calls after the first pitch.

The effect is just as (if not more) noticeable for left-handed hitters. Pitchers seem to gain the edge that doesn’t exist after throwing one close fastball to a lefty. Using the same criteria, I’ve plotted 2,780 pairs of fastballs below. You’ll notice that it’s tough to get a strike call anywhere on or off the edge on the first pitch, but much easier on the second. Note the change in the scale on the right. 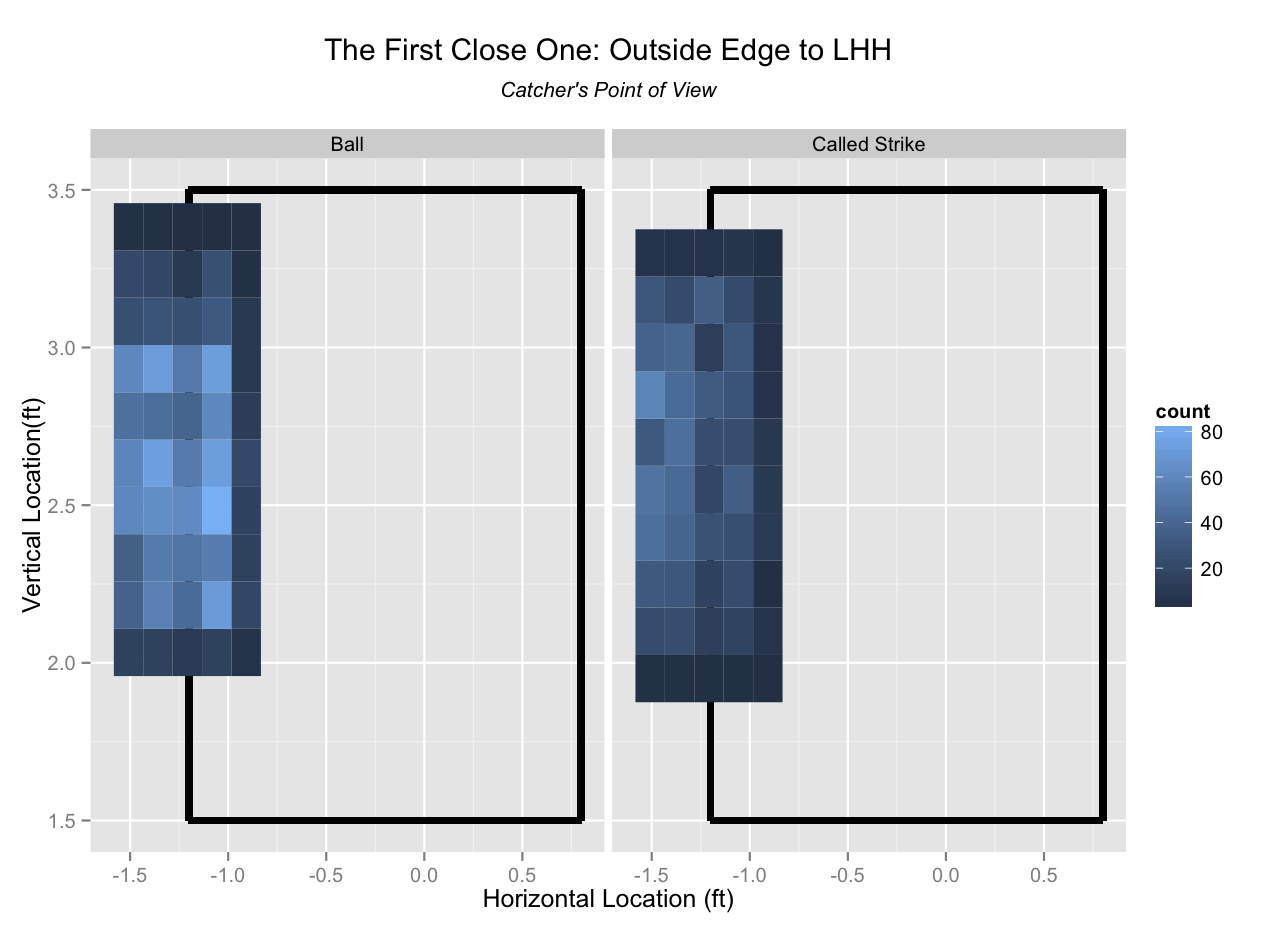 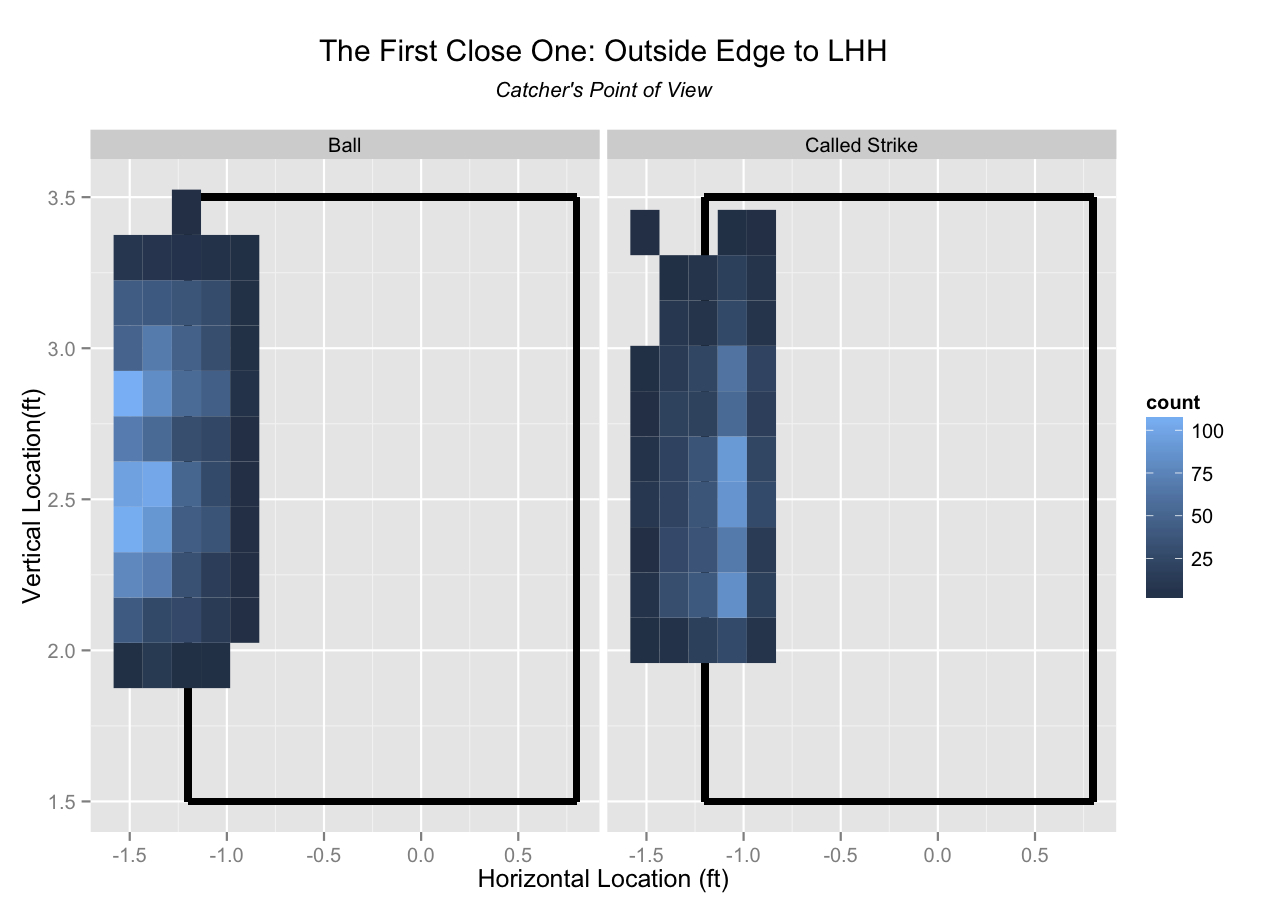 On the second pitch, strikes become strikes and balls become balls. It’s almost as if umpires get a trial run to calibrate the eyes on that first pitch. Whatever the reason, it’s clear that umpires improve dramatically and establish a boundary that looks consistent. The outside edge of the strike zone for left-handed hitters is notoriously difficult to pin down, but this situation proves to be an exception. If you’ve ever wondered why so many pitchers pound the outside edge against left-handed hitters, this shift might help explain it.

It can be frustrating to watch a pitcher attempt to repetitively pound the outside edge against left-handed hitters, but it looks like they have at least one legitimate reason to. I now wonder if pitchers are aware of this shift, and how often they take advantage of it intentionally.

What We Know Now
It’s pretty clear that a close fastball on the edge of the plate sharpens an umpire’s eye for the called strike zone. We see in these plots that umpires don’t always get the call right the first time, but they do a better job the second time around (especially with pitches that are a few inches away from the edge).

Left-handed hitters also see a clear boundary created, and for this group, the first close pitch appears to give the pitcher a huge advantage. I have yet to attach any numbers to this effect, but here’s something that really took me by surprise.

If we establish a firm boundary for the lefty outside edge of 1.2 feet away from home plate, the called strike zone changes dramatically from the first pitch of the sequence to the second. In spite of the fact that the number of pitches inside the traditional strike zone decreases from 43.7 percent to 38.0 percent, the percentage of called strikes (inside and outside of the zone) surges from 27.0 percent on the first fastball to 36.9 percent on the second. Yikes.

This stuff is interesting, but we can go way deeper. Next week, I’ll have a few more scary statistics to share. I’ll also look at the impact of the exact location of the previous fastball on the call of the next one. Spoiler alert: Sabathia was onto something.

I take a particular interest in analysis of umpires as I used to umpire. I went to umpire pro-school and umpired all the way up to college baseball.

Hate to say it, but make up calls do exist. I hate to admit it, but looking back on my career I have to admit it. I'm not even sure if it's a conscious decision. It's your inate sense of fairness that takes over. Missing a call and knowing it really sucks
Reply to rsambrook
TheRedsMan
If we already know that umpires are averse to calling walks and strikeouts (e.g. more likely to call strikes on 3-0 and 3-1), and we know that the first ball in the sequence you analyzed is a ball, doesn't that suggest that the subsequent pitch has an increased chance of being called a strike regardless of the location?

That is to say, perhaps what you're observing has more to do with the umpire attempting to balance the count than normalizing based on specific location.
Reply to TheRedsMan
nowoodward
That's a great point-- it's tough to control for the changing size of the strike zone when taking a visual approach. In the next piece, I do control for the contextual factors (count, hitter, etc.) that change the size of the zone.
Reply to nowoodward
misterjohnny
I am a scorekeeper for Little League baseball, so I am behind the plate with a great view of every pitch (maybe better than the umpire). I see similar traits from those umpires. Most are hesitant to call a borderline strike 3, but if the next pitch is anywhere near the zone the kid will get rung up.
Reply to misterjohnny
TheRedsMan
It's almost as if they're treating the pitches as partial strikes and trying keep the math even. So for him, the fairest way to call two borderline pitches he's not sure (.5 strike, .5 ball each) is to give the batter 1 ball and 1 strike.
Reply to TheRedsMan
mcbecker5
I wonder if part of the effect on left-handed hitters has to do with the fact that, the majority of the time, a right-handed pitcher is throwing to them. I wonder if you'd see a similar effect if you controlled right-handed hitters against left-handed pitchers (like the Sabathia example). Or more broadly, do opposite handed pitchers see a greater affect, likely due to the trajectory of the ball.

It sounds like your follow-up article will address this issue among other factors, so I look forward to it! This is really interesting stuff!
Reply to mcbecker5