Marlins left fielder Christian Yelich looks like he’s 14. But you never notice once he steps in the batter’s box. Yelich doesn’t take a willy-nilly approach to hitting. In fact, his mature approach might earn him the title of “student of the game” (whatever that means). In a recent interview with FanGraphs’ David Laurila, Yelich had this to say on his strategy at the dish:

Certain pitchers do certain things and fall into patterns. And pitchers try to learn hitters. That’s why I don’t want to tell you about my approach at the plate. It’s a big part of the game. Certain guys pitch you a certain way and other guys pitch another way.

When asked to expand on this quote, Yelich kept his mouth shut. He has information that we don’t have, and he doesn’t want to lose his edge.

Is that a challenge, Christian Yelich? If so, you’re on. Let’s break down Yelich’s top-secret strategy to success at the plate.

Where He Wants It
I’m usually a numbers guy, but I went to the video for this project. I jotted down notes as I watched tons of Christian Yelich at-bats, so I can confidently say that there is nothing systematic about my own approach to analyzing Yelich’s. While watching these at-bats, I became pretty well acquainted with Adeiny Hechevarria (who often hits eighth for the Marlins) and the edge of home plate closest to third base.

A quick statistical rundown on Yelich: he likes fastballs thrown up and in, and he really doesn’t like to swing at anything thrown to the outside third of the plate if he doesn’t have to. He swings at pitches outside the strike zone less often than the average hitter (22 percent of the time in 2013, vs. a league average of somewhere around 30 percent), but he does unleash his explosive swing on strikes when he sees them—he swings at just as many pitches inside the strike zone as the average major-league hitter.

You may have already guessed that the outside third is exactly where pitchers like to go after Yelich. I’m not sure why, because he does a pretty fine job taking these pitches to left field. Yelich does like to keep his distance from home plate, and his stance in the batter’s box may influence the number of pitches he sees on that outside third. We also know that the outside boundary of the called strike zone extends a little bit further off the plate for left-handed hitters than it does for righties, creating further incentive for pitchers to target Yelich’s outside edge. 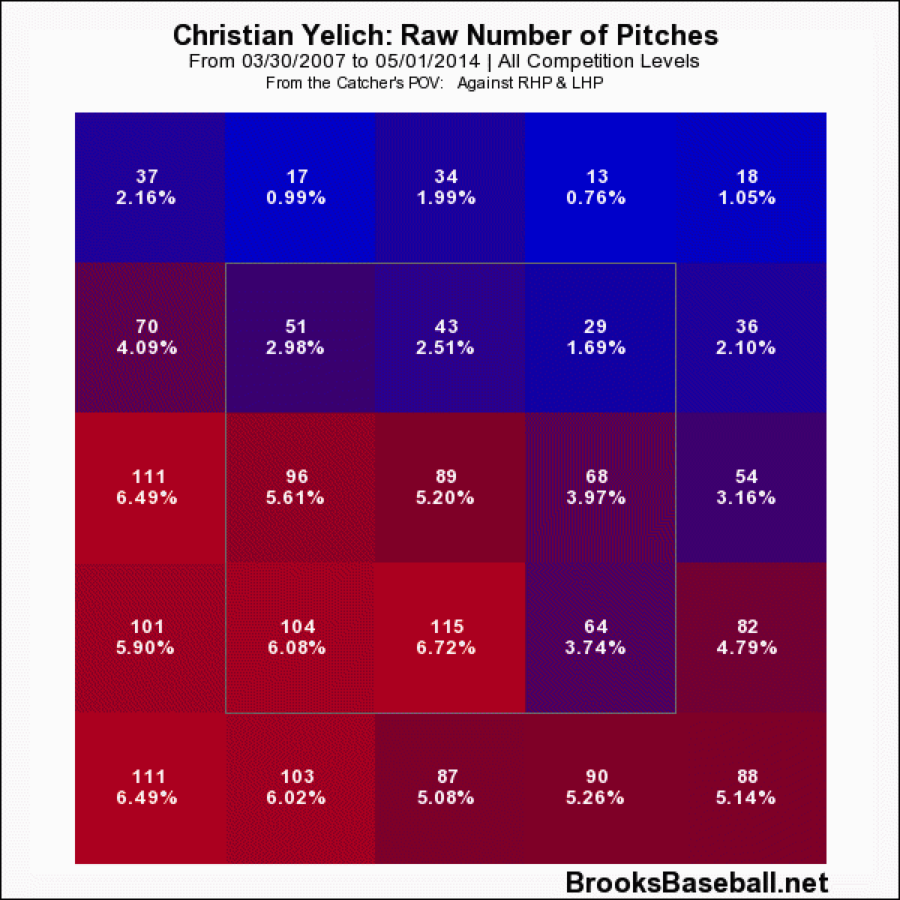 Yelich’s ability get around on inside fastballs alone might justify pitching him away. In spite of his known ability to hit inside fastballs, Yelich does continue to see them. In fact, if I were going to over-analyze his approach here, I’d say that everything he does at the plate is geared toward seeing more belt-high fastballs on the inner half.

A Snake in the Grass
How does Yelich induce juicy fastballs? When I read his three-sentence spiel, one tactic jumps out at me—pattern recognition. When it comes to locating the fastball, major-league pitchers like to mix things up. Fastballs should follow breaking balls, and fastballs thrown over the outside edge should be followed by fastballs thrown to other locations (or at least that’s what your high school coach would tell you).

However, the strike zone has only two sides. A fastball thrown to the outside edge is a great pitch, but where is a pitcher to go next? The inside third is a popular choice, even if it isn’t always a wise one. So, in baiting you to throw an outside fastball, Yelich knows that you’ll be tempted to challenge him on the inside edge in the near future. When you do, he’ll be ready.

Pitchers don’t always end up in Yelich’s happy zone intentionally. Yelich sees a lot of pitches (4.01 per plate appearance), and hitters who see more pitches tend to also see more mistake pitches. Yelich’s patience early in the count also forces pitchers to challenge him, especially when he starts out ahead.

Here’s an example of an “oops” pitch induced by Yelich’s patience. Atlanta hurler Alex Wood went for the outside third, but missed twice. First, here: 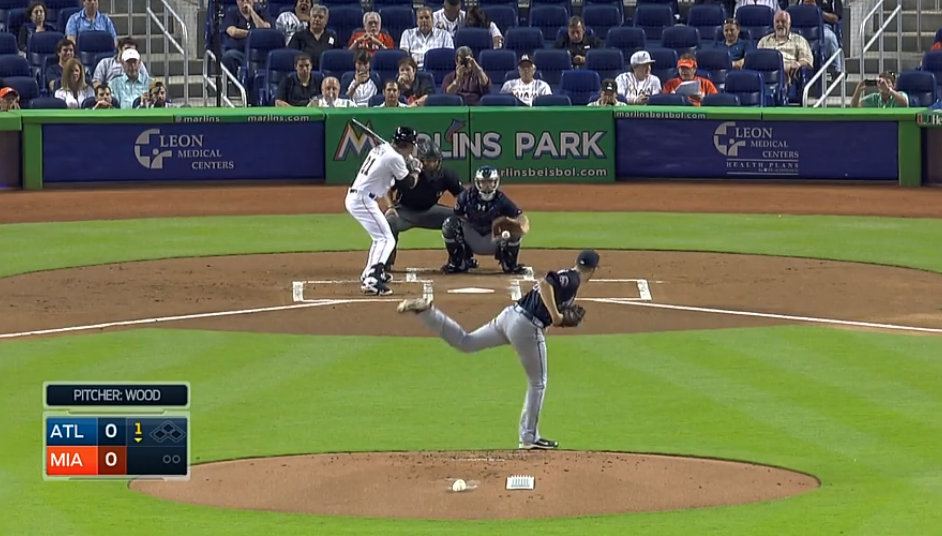 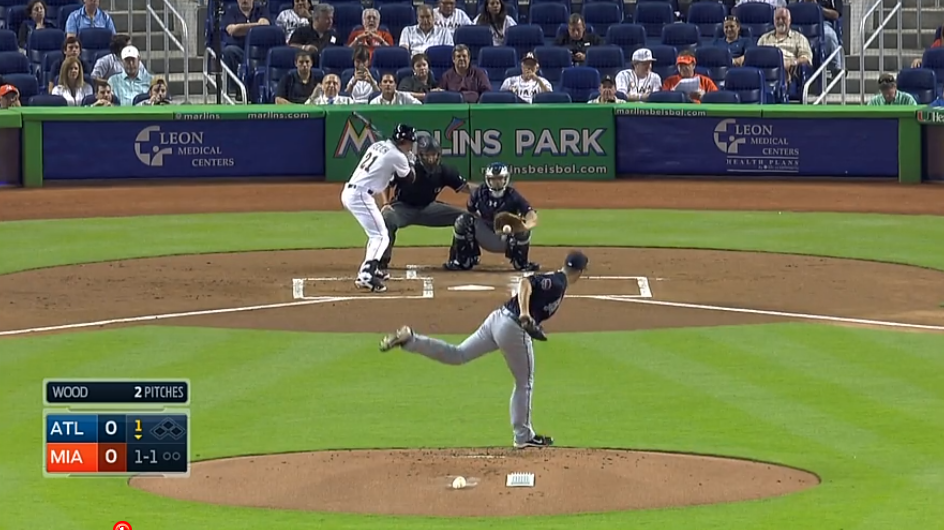 On a 3-2 count, Wood knew he had to catch a little bit more of the plate than he had been getting. He decided to go inside on Yelich but ended up missing by a few inches. The result: a line drive to center field. 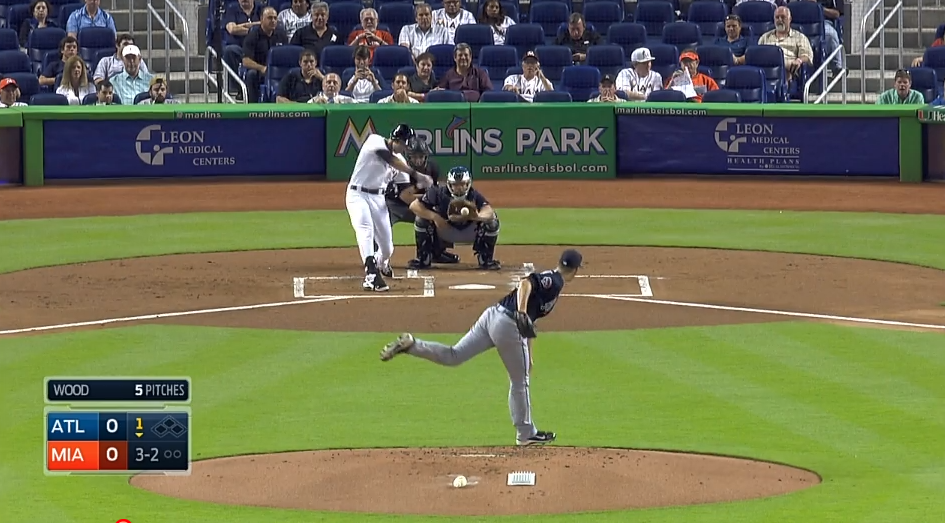 Until he’s up against a wall with two strikes on him, Yelich will swing at the pitches that he thinks he can drive. Most hitters who get deep into counts are comfortable covering the plate with two strikes. Yelich certainly can cover the edges, but he wasn’t really built to hit with two strikes. He is a slightly below-average hitter when it comes to simply putting the bat on the ball, and he tends to chase breaking pitches when he needs to protect the plate.

You could almost describe Yelich’s approach as a gamble. He’ll challenge you to make your pitch while he waits for you to make his. It’s a war of attrition, and one that he is perfectly comfortable with.

Of course, the youngster doesn’t always win. If that first fastball on the outside third doesn’t go his way, Yelich finds himself unable to dictate the terms of the rest of his at-bat. The importance of an umpire’s discretion over the outside corner to Yelich’s success at the plate cannot be understated.

Two different sets of plate appearances against Aaron Harang and Andrew Cashner this season make it very clear that Yelich lives and dies on the outside edge. In the first game, the outside corner went to Harang. In the second, these calls didn’t go Cashner’s way.

Harang started Yelich with these fastballs in his first two at-bats, each of which went for a called strike. 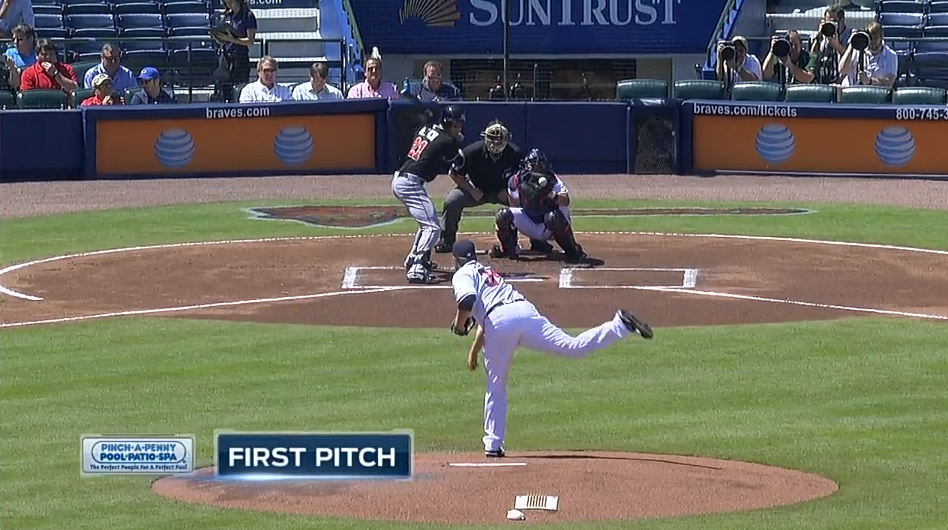 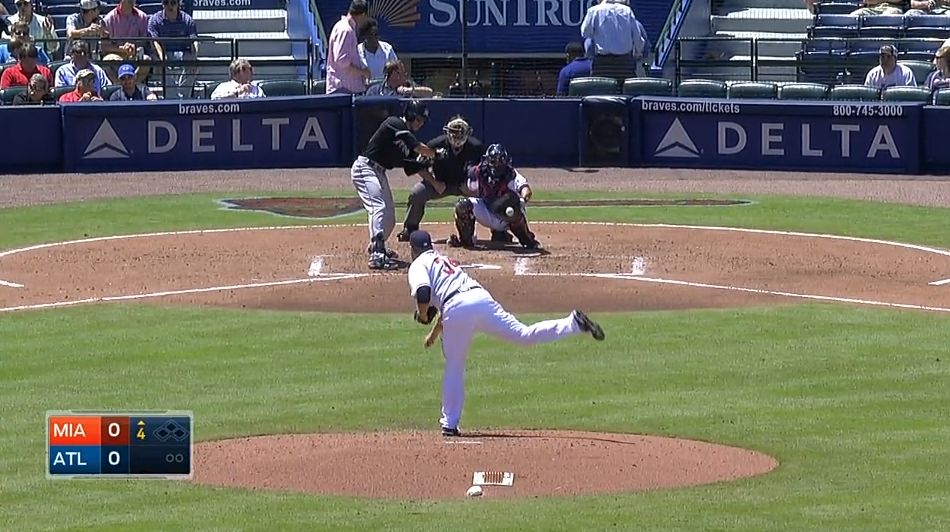 The probability of a called strike for each of these pitches is essentially a coin flip, and Yelich knew that he picked the wrong day to give away the edge. Harang had established the ability to get the call, and had shown no desire to mix things up. In his third at-bat, Yelich took a hack at this pitch and another one just like it. 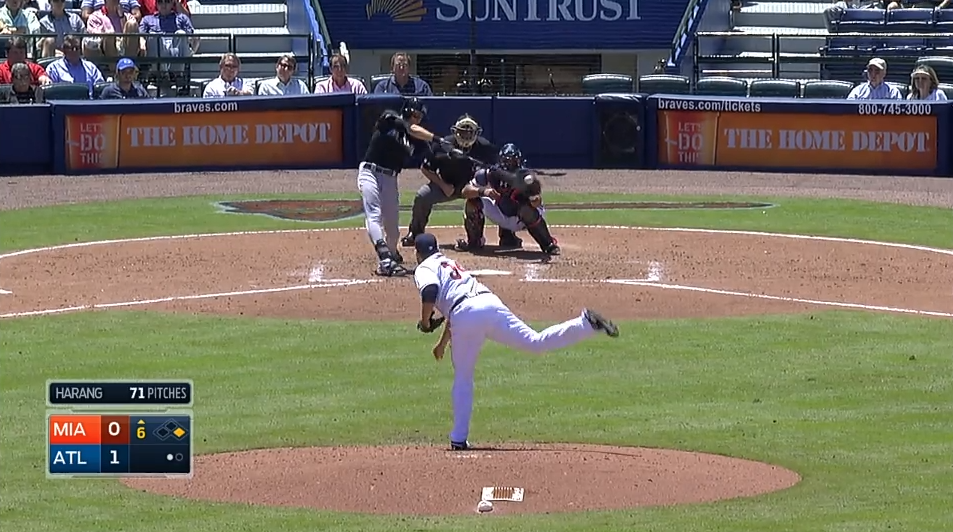 In three at-bats against Harang, Yelich racked up three strikeouts. Harang had won the battle over the outside edge. When the two squared off seven days later, Yelich won the edge and took Harang deep.

Andrew Cashner also knew exactly how to get Yelich out—pitch him away until you have him down to two strikes, and then get him to chase. Cashner jumped ahead of Yelich in his second at-bat on April 5, but he didn’t get enough calls on the outside edge to put him away. 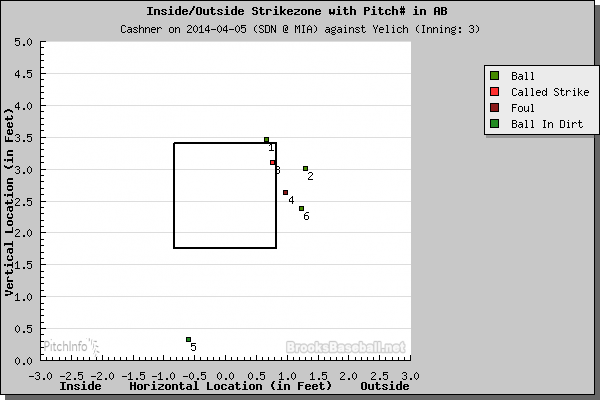 Sitting Dead Red
Does Yelich ever go to the plate looking for anything other than a fastball? No, not really. He often looks fooled when swinging at first-pitch sliders and changeups, and he almost always lays off first-pitch curveballs. Major-league pitchers have started Yelich off with a curve ball 67 times, and he’s swung at exactly two of them. Compare that to his teammate, Giancarlo Stanton, who swings at one out of every four first-pitch curves.

Wood realized he had done Yelich one too many favors in his first at bat of that 4/29 start and made a tactical decision the second time around to stay away from the fastball altogether. Yelich quickly went down 0-2 after passing on two curveballs that floated over the heart of the plate. Down in the count, Yelich didn’t change his approach. Instead, he pushed the count full and got his pitch once again—a fastball up and over the heart of the plate. He hit this one 400 feet. 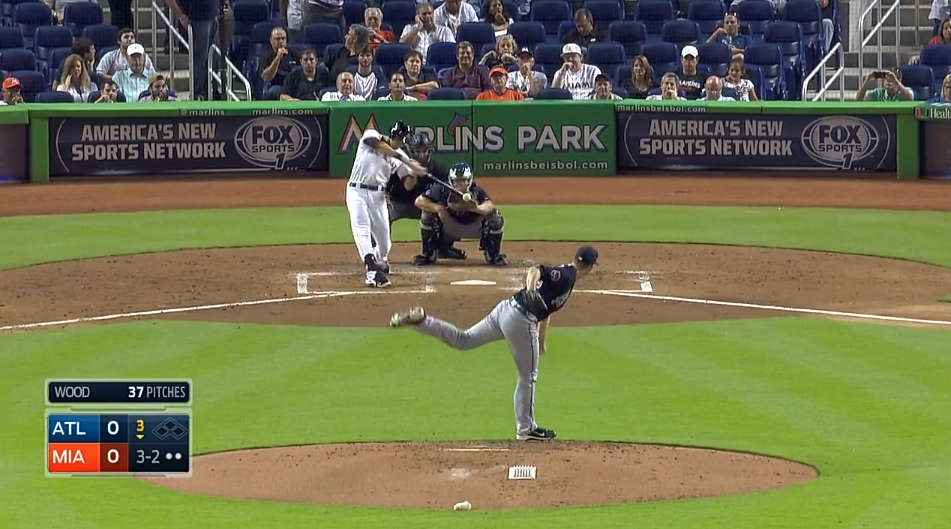 Missing Pieces
Obviously, I have no idea what information Yelich has to look at before each game, or what’s going on in his mind when he steps into the batter’s box. A while back, I came up with a method to predict the next pitch a pitcher will throw using a machine learning technique that took contextual, historical, and hitter-specific information into account. I’m sure Yelich doesn’t have one of those in his head, but I wouldn’t be surprised if his approach is comprised of small bits of information on each pitcher he faces.

Consider this situation: April 22, Yelich led off the game against Alex Wood (who else?). Yelich dragged a bunt down the first base line and ran it out for a base hit. In order to pull that off, Yelich had to bet that Wood would start the game with a fastball. It’s tough to get a bunt down on a breaking ball, and bunting one for a base hit is nearly impossible. Yelich made a wager that I’d take any day—in 2013, Wood began 25 of his 28 outings with a fastball. Yelich recognized a pattern and came up with a plan to take advantage of it. Not bad for a 14-year-old.

You need to be logged in to comment. Login or Subscribe
lheiman
"A while back, I came up with a method to predict the next pitch a pitcher will throw using a machine learning technique that took contextual, historical, and hitter-specific information into account. Iâ€™m sure Yelich doesnâ€™t have one of those in his head..." Well actually...
We've heard hitters in the past talk about putting information "into the old computer" in their heads. It isn't a machine of course, but the brain does perceive and process data, and has a superior ability to reason how to respond based on the physical abilities of its user--thus, a cognitive process beyond simple control logic.
On the other side, the goal in developing cutting edge machine learning techniques is to incorporate elements of cognition: not merely processing data, but also reasoning how to respond that is beyond an "if/then" output. And in what way? In a way that mimics the human brain. Think AI, neural networks, and other advanced techniques.
Yelich, like other selective hitters, seems to have the ability to process what he has seen, and perhaps also what he has learned from the Marlins' staff, and react to it appropriately. While the processing capability isn't going to be at the level of precision of a computer, it may be with enough precision to recognize probabilities, and then apply his reasoning abilities to produce effective action.
Interesting stuff. It would be great to find out if Yelich really is a reasonably smart guy, or if all of this is just hunch and instinct on his part.
Reply to lheiman