For those of you who never watched Sandy Koufax pitch, last night was an opportunity to see an equivalent performance (and if you subscribe to MLB.TV, you can watch it in perpetuity). Jose Fernandez was just that good, using a fastball-slurve one-two punch to strike out 14 over eight scoreless innings and induce a lot of weak contact against the Braves, a team that can slug a baseball pretty well.

Fernandez’s appearance was also a textbook example of a young pitching phenom’s reliance on off-the-charts stuff over mastery of his craft. Lopsided as the results were, there were also some mechanical blemishes that remind us how early in his career (we hope) he is.

In Doug Thorburn’s walk-through of Fernandez’s debut outing, he wrote, “The grade for repetition might appear to be the weak link in his chain, but consistency of timing is the last thing to come around for the vast majority of pitchers.” Part of the trouble with repetition involved staying on line to the plate with his burst: “He occasionally struggles to maintain balance during the high-energy phases of rotation.”

Two hints of this enduring struggle could be found in Fernandez’s start against the Braves. First was a selection of fastballs whose locations missed their target completely. In one first-inning sequence, Jarrod Saltalamacchia set up outside for low fastballs three times in a row:

And each time Fernandez missed that spot with an early release:

What helped a ton was that those fastballs were 97, 98, and 98 mph, respectively, and the hitter was B.J. Upton. (Also of use in preventing early fastball swings was Fernandez’s sweeping curveball, which collected 16 swinging strikes on the night. He had 26 swinging strikes in total.)

The second clue to Fernandez’s inconsistency was an unpredictable arm slot that created two clusters of release points on his fastball. Below are two still frames at release point from first-inning fastballs. On the left is his normal release point, and on the right is one of the fastballs that missed to B.J. Upton. 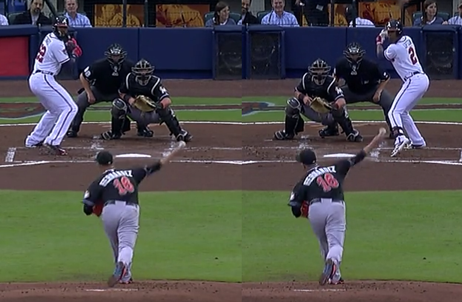 His whole upper body is shifted over several degrees on the right-hand picture, leaving his hand about five or six inches higher than it would be normally. It’s interesting that he didn’t ever have this problem with his curveball. Indeed, prior starts reveal the same pattern. Seventeen percent of his four-seam fastballs were released from a height of at least six feet, while less than than one percent of his curves have come from that height or higher. Observant hitters might be able to tell a fastball is coming if they can read the higher arm slot.

None of these irregularities is a red flag for Steve Blass Disease. They are merely part of a young pitcher’s learning curve. And who even knows whether hitters will be able to use Fernandez’ minor weaknesses to their advantage, so good is his stuff. Sandy Koufax was known to tip his pitches, but Willie Mays famously said, “I knew every pitch he was going to throw and still I couldn't hit him.”

You need to be logged in to comment. Login or Subscribe
Johnston
Every time some young pitcher throws hard and well early in his career he's "the next Koufax" or starts getting compared to him.

Fernandez may one day be just that good, but he certainly needs a couple more seasons of outstanding performance before we start making that comparison.
Reply to Johnston
SixToolPlayer
I'm not projecting him to equal Sandy Koufax over a career (which, as you say, would be premature). I was comparing his outing against the Braves to something Koufax might have done in his prime -- effective wildness anchored by a blazing fastball and unhittable curveball.
Reply to SixToolPlayer