The Monday Takeaway
As the Yankees’ beat writers have learned during the first week of the season, manager Joe Girardi is utilizing defensive shifts more liberally than he did last year.

You know you have taken shifting to extreme when you are doing so for Ryan Flaherty, career 16 HRs/365slg. #Yankees #Orioles

Whether the man at the plate is a slugger or a utility man, if his spray chart shows a clear tendency on ground balls, he’s likely to see Girardi’s infielders move to reflect it. New York Post columnist Joel Sherman was startled by the Yankees’ alignment against Ryan Flaherty—a left-handed hitter with good pop for a middle infielder but a fringy hit tool—who entered Monday’s Bronx opener with a career strikeout rate close to 25 percent. 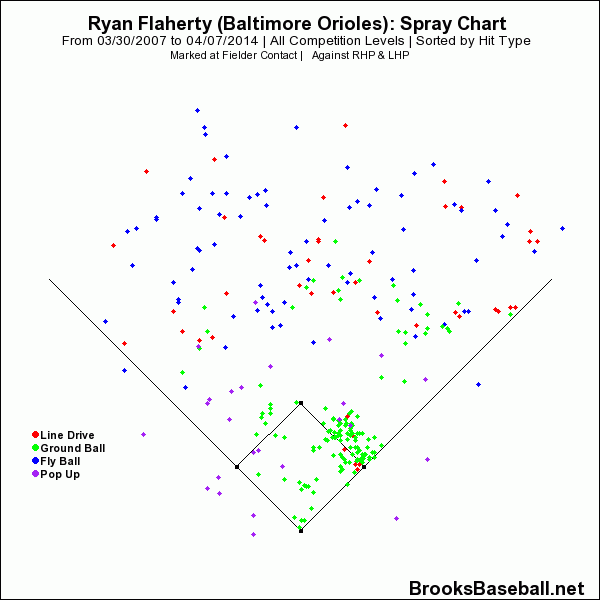 But Flaherty’s ground-ball distribution is incredibly stark. In 457 plate appearances coming into yesterday’s game, he had hit one ground ball to the area defended solely by the third baseman. The best part: Having their third baseman, Miguel Cabrera, in position didn’t help the Tigers on that one ball, an infield single on June 19, 2013. And the only other Flaherty grounder that a big-league third baseman has fielded was hit in the vicinity of the shortstop on June 23, 2013.

As defensive shifts continue to permeate the majors, it will become increasingly apparent that teams aren’t utilizing them to discourage power hitters from pulling the ball. Their primary goal is to maximize defensive efficiency. And apart from a handful of popups to the left side, having the third baseman anywhere close to the line has proven useless to this point in Flaherty’s major-league career.

Quick Hits from Monday
File this among the weirdest plate appearances in baseball history:

With one out and nobody on in the top of the third inning of the Athletics-Twins game yesterday, Jed Lowrie stepped in and took a fastball for a ball and a curveball for strike. He swung at and fouled off each of the next two pitches, then took a slider for a ball and a changeup for a ball.

Lowrie trotted down the line to first. Josh Donaldson made his way to the batter’s box. The Target Field public address announcer played along, naming Donaldson as the next batter. Finally, home-plate umpire Bill Miller realized that Lowrie was this close to pulling a fast one and brought him back to continue the plate appearance.

The A’s shortstop almost got the last laugh. He smacked the next pitch near the foul line in right field; if it was fair, it was gone. The umpires ruled it foul—but they weren’t sure, so when manager Bob Melvin went out to check, they decided it was worth another look.

That look took a while. Eventually, the umpires at the replay control center determined that the call should stand. Lowrie made his second return trip from first base to the plate, this time with the count full.

He took the next pitch for a ball and, for the third time in the plate appearance, jogged to first base. It was as though the five minutes between ball three and ball four had never happened.

Trivia time: One week into the regular season, all but one major leaguer who had received at least 20 plate appearances had made his way on base via hit, walk, or beaning. Who was the lone regular with a .000 on-base percentage when his team’s game began yesterday?

To bump the answer down the page a bit, here’s a short paragraph of hints. This player’s former manager routinely caught flak for batting him second, where his long-standing OBP woes prevented his club’s best hitters from coming to bat with runners to drive home. A product of Ole Miss, he was selected in the second round of the 2007 draft and collected at least one hit in each of his first seven big-league games.

The answer: Zack Cozart, whose schneid reached 0-for-22 before he singled against Trevor Rosenthal with the bases loaded in the top of the ninth. Cozart’s knock drove in Jay Bruce and brought the go-ahead run to the plate with nobody out, but Rosenthal was able to bear down and preserve the lead handed to him by Michael Wacha and the Cardinals offense.

Wacha, who took the baseball world by storm with an excellent rookie year that carried into a duel with 21 innings of one-run work during the Cardinals’ run to the senior-circuit pennant, has picked up where he left off in 2013. The 22-year-old limited the Reds to one earned run over 12 1/3 frames in his first two starts, fanning 10 and walking two.

Josh Hamilton and three-walk games just don’t go together. The last time he had one, the opposing starter was Jarrod Washburn—who, you might remember, retired after the 2009 season.

The last time until yesterday, that is.

Hamilton needed help to add a fourth three-free-pass contest to his résumé. Brad Peacock walked him intentionally with runners at second and third and one out in the seventh. But when you only have two of them in 894 career games sans assistance from the opposing manager, you’ll take one however you can get it.

Those three bases on balls doubled Hamilton’s total for the year to six. He didn’t work his sixth walk of the 2013 season until April 30, by which point he had 26 games and 32 strikeouts on his line.

That’s good news for the Angels—and Hamilton’s .500/.600/.833 triple-slash line in the early going is even better. He’s been worth almost a win above replacement just seven games into the year. The road to October is littered with potholes, but the 32-year-old has done about as well as the Angels could have hoped for so far.

The Defensive Play of the Day
Two rainouts on the nine-game docket left the pickings slim. For the second time in a week, a Troy Tulowitzki throw gets the nod:

You need to be logged in to comment. Login or Subscribe
rebob9
Urban economics. Jumbo shrimp.
Reply to rebob9
walrus0909
I didn't know Ventura was studying urban economics. Good for him! ...oh wait.
Reply to walrus0909
statsrath
Heh, unfortunate wording there. Fixed, thanks.
Reply to statsrath
medmel
Just 2 questions. Does the shiftiness of a manager change the apparent range factor of an infielder? How would you adjust for this?
Reply to medmel
statsrath
It's funny that you mention that, because the Yankees' color guy, David Cone, mentioned that on the broadcast yesterday. I'd imagine the adjustment will become easier to make if/when FIELDf/x data become available.
Reply to statsrath
leleutd
Daniel, As a member of a forward thinking organization, shouldn't you not mention BJ Upton's SSS data against one particular starting pitcher? By bringing it up, how you did, it sounds like you believe it's significant. I can almost understand the urge of a live TV announcer saying that. They have to think of things quickly, and ad hoc. But you didn't need to say that, because you could edit your article. Or are you suggesting some sort of signal in 25 PA?
Reply to leleutd
statsrath
Travis, I go back and forth on the significance of head-to-head plate appearance data, as I think there are matchups in which it is significant. However, I agree that it generally is overused by announcers who need to come up with facts on the fly, and I try to avoid leaning on it in WYNTK unless there is a long-standing, eye-popping trend. This probably did not meet that standard, and it's fair for you to call me on it. Thanks for the feedback.
Reply to statsrath