Thanks to the well-timed retirements of Chipper Jones, Mariano Rivera, and Derek Jeter, we've been plagued by treated to back-to-back-to back retirement tours in 2012, 2013, and now 2014. Ostensibly, the most memorable aspect of these final laps around the league is the chance to get a last glimpse at an outgoing great, but we all know that what we really remember is each team’s choice of retirement gift. I don’t remember Jones’ ceremony in San Diego, but I do remember that the Padres gave him a surfboard. I don’t recall how the Rays recognized Rivera, but I’ll never be able to unsee the creepy golem-like sand structure they created for the occasion. And so on.

Now that we’ve built up a considerable sample of recent retirement tour gifts, we can attempt to answer a few questions this season: Which retirement tour yielded the greatest gifts? Have some teams given the same gift more than once? And is the quality of the gifts increasing or decreasing over time?

To answer these important questions, I’ll be comparing the gifts Jeter gets this season to the ones Jones and Rivera received. However, in order to make this exercise more sabermetrically sound and eliminate all confounding factors, we’ll be judging each retirement tour's gifts against the same baseline. Only gifts given by teams that honored all three retirees will be considered.

The most recent retirement tour kicked off on Wednesday, as the Astros bent the knee to the Yankees’ shortstop. Houston was a stop on all three farewell tours, despite what George Costanza said, so our first opportunity to rank retirement gifts has already arrived. 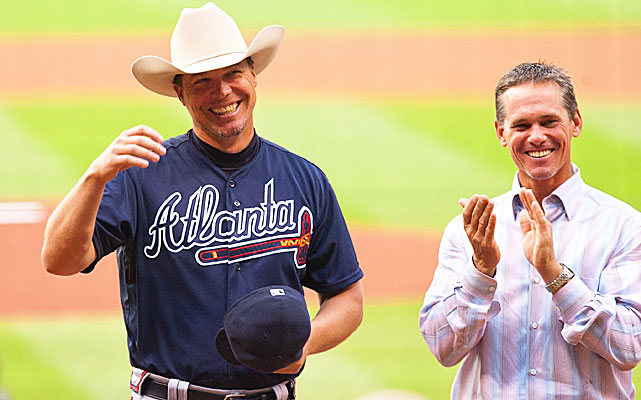 Analysis: Pretty much the bare minimum. Basically, the Astros’ PR department forgot to get a gift, remembered at the last second, then grabbed a hat off the first fan they saw wearing one on their way down to the field. It’s a gift, but one without any evidence of forethought or custom craftsmanship. Ranking this third is an easy call. I’d put it lower if I could. 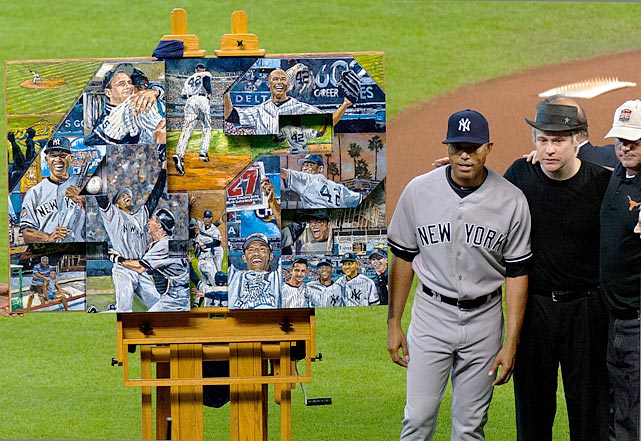 Analysis: It’s a bit garish, and he’ll probably hang it in his least-trafficked hallway when the Astros aren’t visiting, but at least it’s tailored to the individual and took some time to produce. 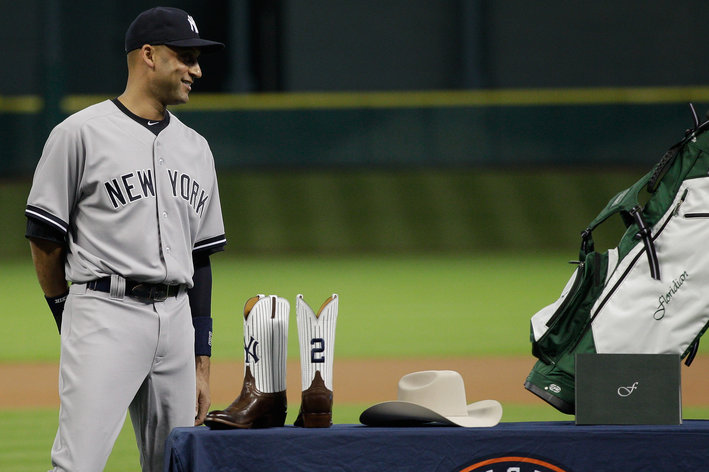 Analysis: You have to wonder whether the Astros recycled the Stetson after Chipper wore it once and “accidentally” left it in the darkest corner of the visiting clubhouse. Nonetheless, the hat was only one-third of the Captain's take, so we know that Jeter outdid Jones. The boots are an affront to nature, and only someone with Joe Pepitone’s sense of style could possibly pull them off. The golf clubs seem like something Jeter probably would have bought himself by now, but at least they’re easier to re-gift than a personalized painting.

Jeter wins the first stop on the retirement tour easily, collecting the top tribute in terms of quality and quantity.

You need to be logged in to comment. Login or Subscribe
jrbdmb
Should these rankings include some sort of normalization based upon how often the player has visited each city in the past? For example, Chipper played at Houston 67 times in his career, while Jeter has played in Houston only 5 times - making his haul even more impressive. Can't wait to see what the Red Sox give him.
Reply to jrbdmb
kosmo99
My assumption is that the Red Sox will give him pasta diving equipment.
Reply to kosmo99
dmarcus
I was just having this discussion with my daughter the other day - I wonder what the Astros got Jeter for a going-away gift? Thanks so much for this - please keep this series going all year!
Reply to dmarcus
nrf2001
This is a great, highly entertaining feature. Hope you continue it throughout the year, Ben!
Reply to nrf2001
adrock
Will any team be cheeky enough to give Jeter a gift basket?
Reply to adrock
kosmo99
Or to just completely ignore his retirement tour?
Reply to kosmo99
LlarryA
Another thing to adjust for is the timing. Look at the date on the Chipper entry -- that was one of the first stops, if not the first. There really wasn't anything to compare to. The hat probably didn't look quite so lame at the time...
Reply to LlarryA
swarmee
So even though the painting is a little loud, I would actually rank it above the boots/hat/golf clubs, because it takes some self-deprecation to celebrate a stellar career from a Yankee in so many moments depicted when realizing how bad the Astros have been over the same period.
Reply to swarmee
trueblue33
I wonder which team is gonna give Jeter something he really needs....like a range.
Reply to trueblue33