“I think the toughest thing facing all of us is the future of free agency and the limited resources that are going to be out there.” —Cardinals general manager John Mozeliak, November 2013

Last week, the Braves signed Ervin Santana, which lowered the count of remaining top 50 free agents to three. One of these months, Kendrys Morales, Stephen Drew, and Joel Hanrahan will get jobs, at which point we can officially close the book on the 2013-14 free-agent class. Even with the book cracked open, though, we can come to one conclusion: Teams just spent a fortune on free agents.

Teams always spend a fortune on free agents, of course, but this winter was bountiful even by big-league standards. Jeff Todd of MLB Trade Rumors has been keeping track of the totals, which he shared with me after updating them to include the Santana contract. Here’s a summary of annual free agent spending, in millions: 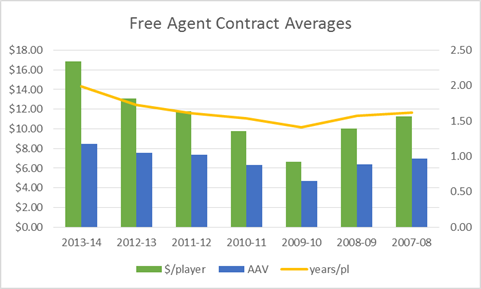 This offseason, contracts have gotten both longer and more lucrative, and clubs have cracked the $2 billion mark after staying below $1.5 billion in each of the previous six years. We can all recite the reasons. Some of the increase is attributable to inflation. Some stems from massive growth in both national and local broadcast contracts (which has given owners a larger piece of the revenue pie). And then there are the CBA’s restrictions on spending in the amateur draft and on the amateur market, which have limited the ways in which teams can flex their financial muscle in order to acquire talent.

But there’s another factor that may have helped persuade teams to spend a little extra this offseason: the names on next year’s list. A team in need of a bat at second base won’t be able to bid on Robinson Cano; they’ll have to settle for Rickie Weeks, assuming his option for 2015 doesn’t vest (or Mark Ellis or Kelly Johnson if it does). At catcher, the closest thing to Brian McCann is Russell Martin. The best first baseman is…Corey Hart? Adam LaRoche? And forget Jacoby Ellsbury or Shin-Soo Choo; as of today, the most attractive outfielder is Colby Rasmus.

That sounds like a lot less impact talent. But how can we quantify the quality of a free-agent class?

One way would be to add up the wins that the cream of each crop was projected to produce. MLBTR founder Tim Dierkes has been publishing top 50 free agent lists for eight years, beginning with the 2005-06 offseason. PECOTA gives us the ability to run retroactive projections (retrojections) for players from previous years, so we took those nine lists and ran retrojections for everyone on them. For Alex Rodriguez, ranked no. 1 on the 2007-08 list, we ran a retrojection for the 2008 season, based on his pre-2008 performance. For Albert Pujols, who ranked first on the 2011-12 list, we ran a retrojection for 2012 based on his production prior to that. And so on.* For players on the most recent lists, we used 2014 PECOTA projections, and for the 2015 class, we took the top 50 projected WARP scores for anyone on MLBTR’s free agent list who doesn’t have an option for 2015.

*The only players for whom we couldn’t run retrojections were Japanese imports who hadn’t made it to the majors before appearing on Tim’s list. If those players were posted and played in MLB in the season following their inclusion on a list, I plugged in their actual stats instead of a retrojection. If they weren’t posted, I substituted a retrojection for an “honorable mention” player on Tim’s top 50 list (when he included one) or, failing that, a generic value derived by averaging the stats of the bottom five free agents from that year. 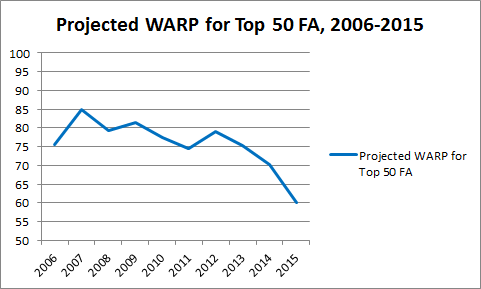 It’s possible that looking only at the top 50 free agents in each class obscures a difference in depth—one year could have a strong top 50 but no talent below that, while another might have a more modest top 50 but a very gradual drop-off from, say, 51-60. As a proxy for the depth of each class, I calculated the average projected WARP of the bottom 10 guys on each top 50. Again, the 2014-15 class brings up the rear.

There’s one important caveat here. For each of these seasons, we’re letting PECOTA project playing time for all 50 free agents, so the innings pitched and plate appearance projections (and therefore the projected WARP totals) probably aren’t as accurate as the ones in our Depth Charts, which are crowdsourced by the BP staff. So as an additional check, we can take the playing-time component out of the picture and look how productive each offseason’s top 50 free agents were projected to be on a rate basis. Here’s a graph of each crop’s projected WARP/600 PA (for position players) and WARP/200 IP (for pitchers): 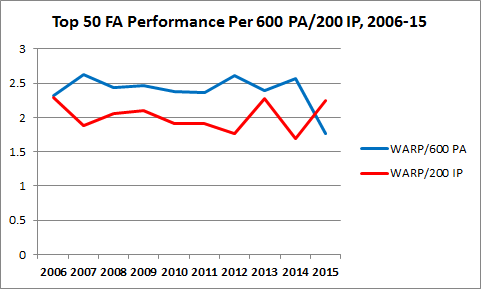 When we ignore playing time, we see that inning-per-inning, next winter's free agent pitchers are projected to be pretty good. The shortfall comes from the position players, who are projected to be terrible even per plate appearance. The average projection for a 2015 top 50 free agent position player is 1.76 WARP/600 PA; from 2006-2014, the average was 2.46, 40 percent higher.

Admittedly, we don’t have a complete list of players who’ll be free agents after this year. Anyone who gets cut during the season or non-tendered in late November will also be a certified free agent. However, guys who get cut or non-tendered tend (intuitively) not to be impact players. Last year, teams non-tendered 43 players. The best of them were relievers like John Axford , Ronald Belisario, and Ryan Webb or flawed position players like J.P. Arencibia and Garrett Jones. If those guys cracked a top 50, it would be at the bottom, so it’s unlikely that the upcoming class is going to look at lot stronger at the end of the year.

Just the opposite, actually. While some impending free agents (Chase Headley, Pablo Sandoval, Josh Willingham, Max Scherzer, James Shields) have stated that they don’t plan to discuss extensions during the season, others have expressed interested in or been tied to talks. The Dodgers have discussed a contract with Hanley Ramirez, who recently said that he hopes to be “a Dodger for life.” Justin Masterson has invited the Indians to keep him in Cleveland. Similar stories surround the Orioles and J.J. Hardy; the Pirates and Martin; the Red Sox and both Jon Lester and David Ortiz; the Pirates and Jason Grilli. It’s more likely that next year’s free agent class will lose talent between today and November than it is that the group will get stronger.

So the 2014-15 free-agent class looks like the weakest in recent memory (particularly for position players), which may have been in general managers’ minds as they spent billions to future-proof their rosters this winter. What’s the significance? Will this be a blip, or the new normal?

Remember the Mozeliak quote at the top of the page. According to the Tribune-Review article that that quote came from, 108 players on major-league rosters last season had signed multi-year extensions that bought out at least one season of free agency. And the trend toward extensions doesn’t seem to be slowing. A year ago, Sam Miller speculated that the next frontier for extensions would be offering long-term contracts to a player who hadn’t yet made the majors. On Wednesday, we learned that that frontier has been settled: According to Ken Rosenthal, the Astros offered George Springer a seven-year deal last September.

So maybe next winter’s free-agent class is the canary in the coal mine, the first real indicator of how difficult it’s becoming to build a contender by paying for established stars. (If not for extensions, teams would have been able to bid on Justin Verlander, Felix Hernandez, Elvis Andrus, and Coco Crisp, among others, eight months from now.) Colin Wyers (who now, ironically, works for the team that tried to sign Springer) saw this coming a couple years ago, calling the extension craze a tragedy of the commons:

If teams overgraze the free agency pool, what they’ll come to find is that pretty soon there won’t be many free agents left. The obvious problem is that this makes it harder for teams to acquire new talent. But the subtler and possibly more dangerous problem for teams and their owners is that if talent becomes scarce, it becomes harder to properly evaluate that talent—with so few players available, the market becomes inefficient, and salaries fall out of whack with actual production.

What we are certain about is that MLB now has a collective bargaining agreement that severely curtails the ability of clubs to use money to acquire new amateur talent. Teams are forced into a de facto hard slot for draft picks, and their ability to spend money on foreign players is severely curtailed. Continuing to sign players to these long-term deals would be a way for teams to put similar constraints on their ability to acquire professional talent. For the few players left, that would mean clear benefits in terms of the salaries they’re able to command. By locking up the supply of players on both ends, teams may be causing themselves to spend more money on players rather than achieving the cost savings they thought were in store.

Even if Wyers was right, the situation could correct itself. The fewer free agents there are, the more the good ones can expect to make. It won’t take too many massive deals for mediocre players before young extension candidates start to reconsider the wisdom of signing away their chance to hit the open market and benefit from scarcity. Every current player who signs an extension could be upping the incentive for future players to do something different.

Until then, though, the free-agent crop might lie fallow. No wonder the smart teams are squirrelling prospects away for the winter.

Thanks to Rob McQuown, Nick Bacarella, and Jeff Todd for research assistance.

You need to be logged in to comment. Login or Subscribe
swarmee
Is this an example of life imitating art, i.e. fantasy leagues? Since the same amount (or more) money will be chasing a worsened pool of free agents, the teams will now have to pay inflated auction prices for free agents (+35% more). Will next season's 1 WAR be worth $8-9M instead of $6.5M? Especially since more local television contracts will presumably be signed and the Mets, Marlins, and Cubs might start opening back up the purse?

Maybe Hanley is better off not signing an extension this season.
Reply to swarmee
Zaxell
I'm a little leery of using pre-2014 projections for the 2015 free agent pool. It looks weak, but won't the free agent pool generally be depressed downward by selecting the 50 individuals a year earlier? Of the top 50 projected free agents (and the dozens behind them), some will outperform their projections, some of them significantly, and their 2015 projections will improve accordingly.

More specifically, if we ran this 2 years ago, the top 50 pre-2014 FAs probably wouldn't include (or would be much lower for) guys like Saltalamacchia, Colon, Drew, Peralta, Loney, or Kazmir.

If you use projections for 2 years in the future instead of 1 for all years, does the talent gap for the 2015 class change?
Reply to Zaxell