The Oakland Athletics finished 2013 with baseball's fourth-lowest payroll, fourth-best offense, and best clubhouse chemistry. Debate has centered on whether the latter two are related. There’s nothing objectionable about “good guy” genes—it’s a solid organizational goal to have. But chemistry alone doesn’t put runs on the board, and if a team is missing the talent, they better find the runs elsewhere. The 2002 Athletics discovered them in walk deities and college arms; once those methods pervaded front offices, the A’s slipped back into losing. Was chemistry the only undervalued commodity of their recent resurgence?

As the baseball community obtains more knowledge, roster construction strategies evolve. Previously undervalued talents like walks and defense are now accepted constructs. The A’s are Hollywood-infamous for adopting them before their competitors while prices were low. After a 74-win 2011, they cheaply signed Brandon Inge and Jonny Gomes, who Brandon McCarthy claimed bolstered the clubhouse DNA to the tune of 20 wins. But Inge and Gomes were two of several players who also bolstered a less-visible statistic: fly ball-to-ground ball ratio.

Since 2009, fly ball rates (which exclude popups here) have gradually decreased. Oakland has defied this trend, ranking first from 2012-13. What caused the A’s jump? Let’s inspect their transaction logs, beginning with their acquisitions for 2012:

Is it a coincidence these seven batters had above-average fly ball rates when Billy Beane and his front office acquired them? Maybe. It’s less believable when reviewing his 2013 shopping cart:

This time, Beane spent more to fill premium defensive positions1. Their commonality is unmistakable: while fly balls around the league grew rarer, Beane stocked his lineup with air-inclined hitters. As a result, 60 percent of Oakland's plate appearances last season were taken by “fly-ball hitters” (defined as a hitter whose ground ball rate is one standard deviation below the league mean)2. See how that compares to the rest of the league: 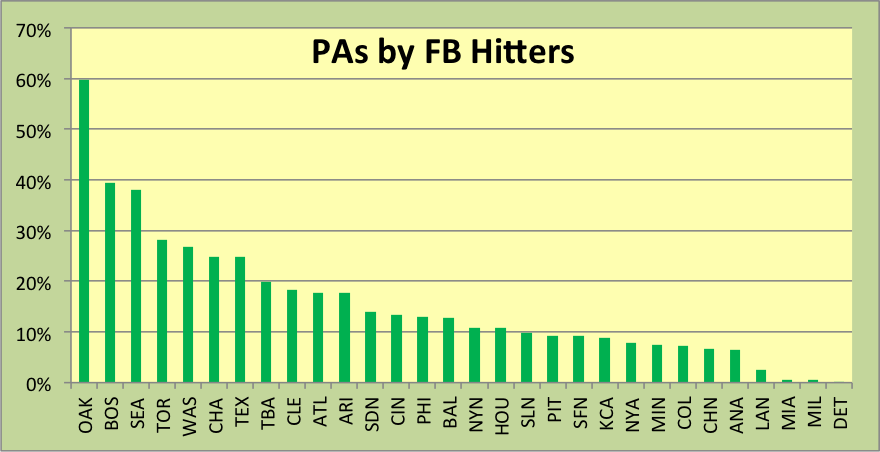 The other platoon advantage
The Book: Playing the Percentages in Baseball devotes a chapter to platoon effects. Five pages discuss handedness, a mainstay of baseball analysis today. Two pages cover a less visible effect: batted-ball tendencies. Authors Tango, Lichtman, and Dolphin found that fly-ball hitters had an advantage over ground-ball hitters, simply because they are better hitters—you can’t homer on grounders, after all. They also found that fly-ball hitters are especially good against ground-ball pitchers, because the former tend to swing under the ball while the latter want the hitter to swing over the ball.

However, Tango et al. noted that this platoon advantage is hard to exploit because players tend to be neutral rather than lean to either extreme. Also, the advantage itself is very small, and hence overshadowed by the handedness platoon. Such a minimal advantage would (theoretically) require being multiplied through several hitters to become meaningful.

So what happens when a determined, resourceful general manager decides to overhaul his lineup with fly-ball hitters, capitalizing on a league-wide trend toward ground-ball pitchers?

First, updating The Book’s findings using the above hitter definition (and applying the same for pitchers), here’s how each type of batter performs against each type of pitcher in True Average, from 2007-13:

This table doesn’t differ much from The Book’s version. Approximately two-thirds of batters and pitchers have neutral batted ball tendencies, and thus the majority of batter-pitcher matchups will not have this platoon effect in play. That is, unless you hit for the 2013 Athletics:

The 60 percent found earlier, segmented into pitchers faced. From above, fly-ball hitters have a .275 TAv—15 points above league average, and the mark of a top-five offense. If a team distributed their plate appearances this way, they would position themselves for offensive prosperity. How much did it help Oakland?

The 38 percent of their fly ball hitters’ plate appearances against neutral pitchers resulted in a .282 True Average. That’s better than the solid league TAv in that matchup (.276)—and it occurred for the Athletics four times as often!

Moreover, Oakland fly ball hitters hit .302 against GB pitchers, a matchup occurring nine percent of the time. Another way of putting that: In 547 plate appearances against ground-ballers, fly ball-hitting Athletics (such as low-salary acquisitions like Jed Lowrie and Brandon Moss) hit like $16-million Matt Holliday. The rest of the time—over 90 percent of PAs—they hit like Chase Headley.

The Book claimed that managers weren’t using this platoon advantage enough. It appears that Billy Beane has, effectively transforming his batting roster into 12 Chase Headleys and a Matt Holliday.

But an air-happy team means a ground-averting one: The A’s had the fewest grounders in the league by far (not a single team broke .200 TAv on ground balls)4. More importantly, the A’s had the league’s fourth-highest line drive rate—and a .634 TAv on liners, second best in the league:

The purpose of acquiring fly ball hitters isn’t necessarily to hit fly balls—it's also to hit line drives. Fly balls lie at the mercy of HR:FB rates and park effects. Those constants hardly affect line drives, though, and line drives are the best kind of batted ball, because they become hits two-thirds of the time. And when are hitters more likely to hit a line drive? When they have a matchup advantage!

Because Athletic batters had the platoon advantage so often, they hit many line drives, and “quality line drives” at that (only Tampa Bay, also a fly ball-inclined team, bested Oakland’s line drive TAv). No matter how expansive O.co’s dimensions are, it won’t suppress the offensive gold that is a line drive.

Hasn’t this advantage been around forever?
Definitely. Power is a cornerstone of top offenses, since there’s a home run for every 10 fly balls. Even Billy Beane, bless his secretive heart, will divulge that home runs are the key to winning. Everyone wants to cultivate power hitters. Yet no team has sniffed the Athletics’ 60 percent of plate appearances by fly ballers in the past nine years:

If other teams have attempted this approach, they weren’t nearly as dedicated to it. So how has it remained an “inefficiency?”

Perhaps, as The Book posited, the advantage was too small to be considered. A team could’ve developed a plan to target inexpensive fly ball hitters, but along the way realized that established edges like favorable handedness matchups, walks, or defense had a larger impact. Worse, the team might’ve disregarded those run sources, losing any advantage gained by the batted ball platoon.

The A’s deftly avoided this trap: not only have they benefited from the batted-ball platoon effect, but they had the second-highest percentage of favorable-handedness matchups. Thanks to aggressive platooning, 70.4 percent of their plate appearances came against opposite-handed pitchers. They also had the third-highest walk rate, which isn’t surprising—fly-ball tendencies go hand-in-hand with patience.

Where the A’s really kept on course was defense: Reddick and Young are not only fly ball hitters, they’re established outfield pros. Cespedes improved considerably as a sophomore. With their starters funneling balls to the outfield5, the A’s posted the league’s second-best defensive efficiency. So despite an apparent re-calibration of team strategy, Beane remained loyal to proven sabermetric principles.

A related theory on why no other team has capitalized on the A's air-ball plan: the advantage wasn’t a net positive until now, after the growth of ground-ball pitchers. This is less verifiable because labeling a pitcher isn’t an easy exercise. My one-deviation-above-the-mean method is always scaled to the league—it doesn’t declare pitchers as a type based on an actual rate threshold. Given the rising ground ball to fly ball ratio, though, it’s not unreasonable to suggest that this platoon advantage has increased enough to be potent.

Ultimately, I’d postulate that in some cases, implementing a team-wide fly-ball initiative might’ve compromised in-place strategies. Because the advantage is small, it would’ve taken a roster revamp to legitimately capitalize on it. The A’s did exactly that—they currently look nothing like their 2011 roster—but it couldn’t have been simple. Budget, owner expectations, landing very specific players, competition, and environment are major influences on the process and result.

If you’re into endings, this generation of the Moneyball A’s, like the 2002 team, lost the ALDS in five games. The irony lies in how: in 24 total innings against Justin Verlander and Max Scherzer, the Athletics scored three runs. Fly-ball pitchers limited Oakland’s fly-ball batters to a .256 TAv during the season, and as you know, Verlander and Scherzer are extreme fly-ballers. Good process, bad playoff opponent.