Earlier this week, the O’s signed Kelvin De La Cruz to a major-league deal. Two days later, they did the same with Escalona, another unproven reliever who throws from the opposite side. The 27-year-old has spent parts of the past four seasons with the Rockies, and he hasn’t distinguished himself. As an extreme flyballer, he was a poor fit for Coors, though you can see a respectable half-season hidden within his abysmal 2013 if you squint and set some selective endpoints. Through June 8, Escalona had a 3.38 ERA in 32 innings, with seven walks and 27 strikeouts. On June 9, he faced four batters and got one out, allowing two homers and a single. And on June 10, he hit the DL with right elbow inflammation, which sidelined him for 22 days.

He should have stayed sidelined. In 13 2/3 innings after his return in early July, he allowed a .345/.433/.638 opponent line, walking seven with just seven Ks and inflating his full-season ERA to 5.67. Escalona threw even harder than he had before the DL stint, with a 95.3 average fastball velocity down the stretch, but he also relied much more heavily on the hard stuff, throwing it 75 percent of the time and reducing his use of the slider, perhaps in an effort to reduce the strain on his elbow.

But this is a scouting-based signing as much as it is one based on small-sample stats. Although Escalona’s track record is spotty, he’s recently added to his arsenal.

Duquette says Escalona starting in Venezuela so he can develop 3rd pitch, a split change, which scouts have raved about.Add to FB, slider

Lefties have crushed Escalona to the tune of a career .257/.333/.513 line, and a solid split-change would go a long way toward fixing that flaw. If it’s an effective pitch, it might make him an effective pitcher. The Orioles have done a decent job of buying low in the bullpen lately, so don’t be shocked if Escalona turns out to be another smart, unheralded acquisition out of the Pedro Strop playbook.

Murphy is a strong bounceback candidate who just joined a team that’s well equipped to make the most of his skills. To start, let’s talk about what he was in his happy times. From 2007-12, he posted a .281 TAv; American League left fielders averaged .268 over the same span. He gave back some of the difference on defense, but still amassed a tad over 10 wins, or exactly two wins per 135 games (his typical playing time over the past five seasons.) That’s an average player.

Murphy was well below average last season, when his bat disappeared and his defense seemed to deteriorate. The lefty hit just .220/.282/.374, surrendering playing time as the season went on. That’s an ugly line, but his other stats say he was snakebitten. Murphy showed his usual moderate power and a career-low strikeout rate, and his plate discipline stats barely budged from his 2012 career year. His batted ball profile, too, was indistinguishable from his career rates. But his BABIP was just .227: 90 points below his career standard at the start of the season, and the third-lowest mark among players with at least 450 plate appearances. This is a textbook case of bad bounce-itis, so expect that figure to rise significantly next season.

And then there’s the team-specific factor that makes Murphy a good fit for Cleveland: Terry Francona is a big fan of the platoon advantage.

Last year, only Bob Melvin’s Athletics had the platoon advantage in a higher percentage of their plate appearance by non-switch-hitters (by a negligible amount). Francona—who consistently used bench players like Mike Aviles, Yan Gomes, and Ryan Raburn to gain favorable matchups— is just the manager to get the most out of Murphy, who has a severe platoon split (career .259/.306/.350 hitter versus southpaws, compared to .280/.347/.469 against righties). And the Indians have the perfect platoon partner for Murphy in Raburn, who’s also 32 and signed for the next two seasons (with a team option for 2016), and who owns a career .263/.336/.492 line against lefties. If the Indians pair the two together in right field, with Murphy taking the long part of the platoon, they’ll have themselves an above-average outfielder for a low combined cost of $8.25 million.

In related news, Nick Swisher can expect even more first base in his future, and Drew Stubbs should prepare to be dangled, then dealt.

Claimed RHP Shawn Tolleson off waivers from the Dodgers. [11/20]

Tolleson does nothing but miss bats, get grounders, and get hurt. In 127 2/3 innings over four minor-league seasons (only 15 innings of which came at Triple-A), he’s recorded a 1.34 ERA with a 13.0 K/9 and a 6.0 strikeout-to-walk rate. The only knock against him from a statistical standpoint is the .316/.426/.561 line lefties posted against him in 2012, his only season with an extended stint in the majors. It’s a small sample, and his career .225/.284/.382 minor-league line against southpaws isn’t too shabby, but he is mostly a four-seam-slider-sinker guy, so platoon splits could be a concern

Tolleson’s body is a bigger problem. He’s already worn out one UCL, and he spent most of last season on the shelf following April back surgery to repair a herniated disk, which was succeeded by soreness in his hip. Given his stats and status as Clayton Kershaw’s best bud, it’s still surprising that the Dodgers didn’t deem him worthy of one of the many open spots on their 40-man. If Tolleson stays healthy, the Dodgers will regret letting Texas take him away.

The idea that Petco is a path to riches for struggling starters is probably overblown. Yes, it’s a hard place to hit homers and doubles, and it’s even a bad park for ground balls. But if you and I are aware of Petco’s quirks, you can count on general managers having heard of them too. To suggest that a shaky starter can go to Petco, make some superficial statistical gains, and parlay that into a big cash reward, you’d have to believe that the market doesn’t price in park effects, which seems like a stretch in 2013.

The Padres have plenty of experience with reclamation-project pitchers. Over the past several seasons, they’ve signed a long list of guys coming off seasons marred by injuries and/or poor performance: Freddy Garcia, Jason Marquis (twice), Ross Ohlendorf, Dustin Moseley, Aaron Harang, Chad Gaudin, Randy Wolf, and Kevin Correia. They’ve also traded for Ian Kennedy, Tyson Ross, Clayton Richard, Sean Gallagher, and Edinson Volquez. There are some success stories there, but also more than a few flops. Not every kiss from Petco turns a fringy pitcher into a prince.

Harang’s case is the best argument in support of Petco’s effect on earning power: after posting a 5.32 ERA in an injury-plagued 2010 with the Reds, he signed a one-year, $3.5 million deal with the Padres, for whom he recorded a 3.64 ERA. On the strength of that season, he landed a two-year, $12 million deal with the Dodgers, despite the fact that his strikeout and walk rates as a Padre were almost identical to what they had been in his final season in Cincinnati. Score one for Petco, right? Well, maybe. It’s true that Harang’s park-adjusted stats hadn’t changed that significantly, but he did lose a lot less time to injury. It’s likely that Los Angeles was paying for Harang’s restored health as much as for some perceived improvement in skill.

(It’s possible that pitching in Petco has some hidden benefits—maybe the bigger ballpark gives pitchers a confidence boost, allowing them to tinker with their repertoires or pitch up in the zone. Harang, for one, decreased his four-seamer usage by 10 percentage points from 2011-11, becoming more of a sinker/slider guy. Maybe that kind of adjustment is common. This seems like a subject those eggheads at Baseball Prospectus should study.)

Something like Harang’s return to health is what Johnson has to hope for. You’ve heard plenty about his velocity decline, which looks like this: 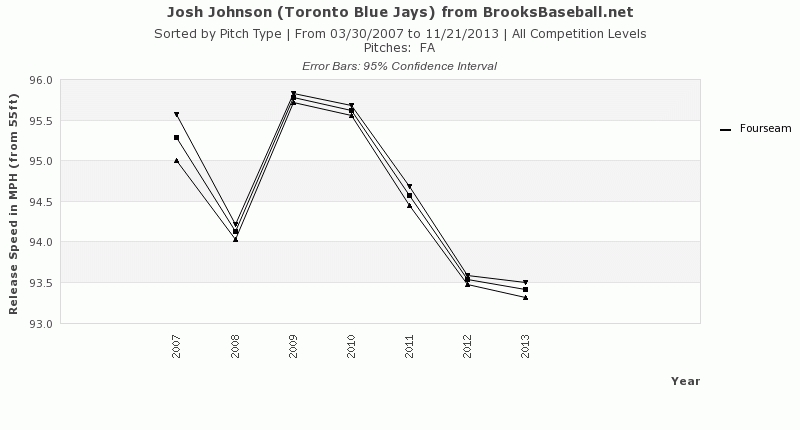 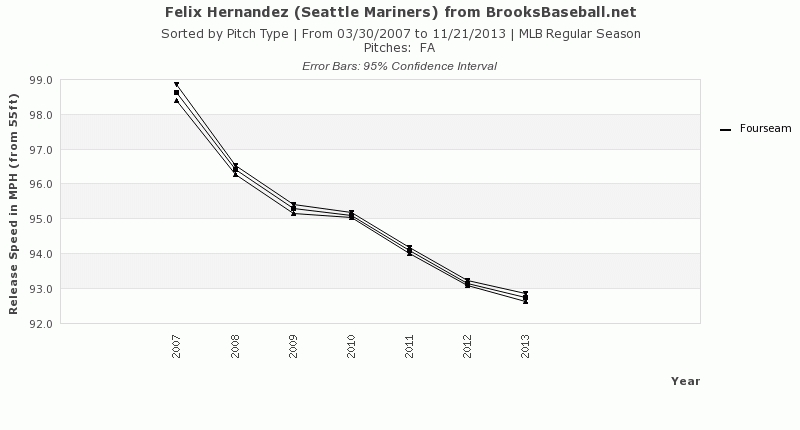 Johnson’s slowing four-seamer hasn’t helped, but enough of his skills are intact to think that he could have another strong season in him. His strikeout, walk, and groundball rates last season were in line with his career marks; the ugly ERA came from a high BABIP and HR/FB rate, for which iffy command (particularly with men on base) bears at least some of the blame. You can excuse the command issues as the product of injury or rust, but you can’t hand-wave away how often Johnson’s body breaks. After two DL stints, 96 days lost to injury, and an October elbow cleanup in 2013, an 150-inning season would be considered a success.

The Padres did build in one way to ease the sting in the event of a really bad boo-boo: if Johnson makes fewer than seven starts next season, San Diego will acquire a $4 million option on him for 2015. That’s nice, but it’s not as exciting as it sounds. The fragile righty hasn’t failed to make that many starts since 2007, when he had Tommy John surgery; if he can’t clear that bar next year, it will mean that he’s suffered an injury so serious that he might not be worth a guaranteed contract in 2015.

Say this for San Diego: with Andrew Cashner, Kennedy, and Johnson atop the rotation, they have the potential for a very strong staff, with plenty of depth to fill in if Johnson falters.

Fantasy: Score one for the One Move series. It’s hard to imagine a better location for a pitcher to rehabilitate his fantasy value than San Diego. While Johnson isn’t flyball prone (32 percent career rate, 30 percent in 2013), the Padres have a solid infield defense, with Jedd Gyorko representing the only weak link. Factor in that the flyballs Johnson does allow should leave the park less often, and this is a win all around. Johnson struggled in so many areas last season, but his 18.5 percent HR/FB rate was a major source of his struggles. With his career rate hovering just over eight percent and a switch from the hitting-friendly Rogers Centre to the pitching-friendly Petco Park, it’s fair to assume that Johnson is in for something of a rebound. While he’s lost some pep on his fastball in recent years, there wasn’t a drastic change in his stuff last season compared to 2012, when he posted an adequate 3.81 ERA. A return to that type of performance would be considered a win for any prospective fantasy owners. Johnson’s value in fantasy mirrors what he is in real life; a substantial risk with less reward than you’d want, but too tempting to pass up anyway. —Craig Goldstein