Throughout the World Series, we'll be providing two recaps of each game, one with a focus on the winner and the other devoting a longer look to the loser. This is the Red Sox entry for Game One. The Cardinals entry is here.

Only one team in the American League walked more often than the Red Sox in 2013, and, if we add hit-by-pitches to the equation, no AL team drew more offense from free bases. Adam Wainwright, meanwhile, came within one walk of having baseball’s lowest walk rate among starters. Intuitively, when these two opposing forces match up, we might expect the edge to go toward the pitcher. If the Red Sox offense’s signature skill is taking advantage of pitchers who aren’t around the strike zone—forcing walks, high pitch counts, and count leverage, and refusing to bail out wild pitchers—then a pitcher who expects no such bailouts could simply execute his plan and make them actually hit the ball.

Instead, the Red Sox knocked Wainwright for five runs in Game One. It was Wainwright’s second-shortest start of the season, and the third-most runs he allowed all year. He averaged 3.70 pitches per batter in 2013; Red Sox batters worked him for 3.97 pitches apiece. Why couldn’t he simply execute his plan?

First, we should ask whether our intuition is correct: Do the Red Sox really do better when they’re facing a pitcher who isn’t in the zone? Using the zone rate leaderboard, we can see which pitchers threw the most pitches in the zone and fewest pitches in the zone in 2013. The Red Sox faced 40 of the 75 most prolific strike throwers at some point in the season, and 42 of the 75 pitchers who spent the most time out of the zone. Each group has its share of stars and scrubs. And, as hypothesized, the Red Sox really did struggle against the control group.

In 264 innings against the zone-rate trailers, the Red Sox scored 144 runs. If we use those pitchers’ actual ERAs as a guide, an average team should have been expected to score 113 runs against them. Of course, the Red Sox have a fantastic offense and a generous home ballpark, so they score 22 percent more runs than the league overall. Adjusted for that, we would have expected them to score 138 runs against the wild pitchers. They narrowly outperformed that.

Where the application of the hypothesis takes a twist, though, is when we look at what kind of pitcher Adam Wainwright actually is. He rarely walks anybody. But he’s also not one of the zone-rate leaders. He’s not even close, in fact; of 381 pitchers who threw at least 650 pitchers, Wainwright ranked just 154th in zone rate. There’s a subtle difference between strike throwers and pitchers who get strikes, and Wainwright (eighth-best strike rate among qualifiers) is the latter. He actually relies on batters to chase outside the zone to get his exceptional strike rate.

Here, for instance, is his pitch chart on the first pitch of at-bats: 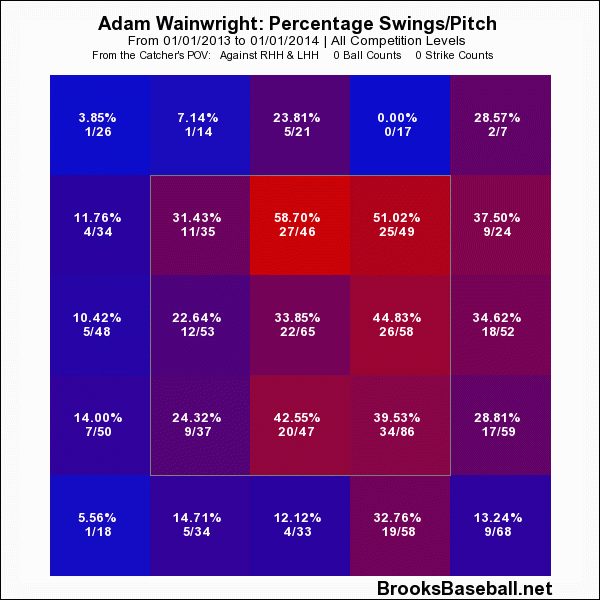 In the first inning, Mike Napoli batted with the bases loaded and one out, still a scoreless game. Wainwright threw him a fastball that was perhaps slightly inside. Wainwright has thrown 25 inside fastballs to right-handed batters to start at-bats this year, and induced 11 swings. Those 11 swings produced one hit (a single), five outs, and five strikes. Napoli took the inside fastball, for ball one. In his career, he has a .971 OPS after a first-pitch ball, and a .736 OPS after a first-pitch strike. Considering the situation, that might have been the single most important non-outcome pitch of the game.

Wainwright followed with a fastball low, a pitch/location combination that he threw to right-handers 32 times in a 1-0 count this year. Nine times the batter swung; those nine swings produced one hit (a single), four outs, and four strikes. Napoli took it, for ball two. In his career, he has a 1.150 OPS after a 2-0 count, and a .778 OPS after a 1-1 count.

The third pitch was a fastball up and on the inside part of the strike zone. Wainwright threw that pitch/location to a right-hander on a 2-0 count just once all year. It went for a home run the first time. It went for a double this time.

To be clear, they didn’t crush Wainwright. They put eight runners on in the first two innings, and of the eight you could put the blame elsewhere on at least five: Pete Kozma’s two errors, Wainwright’s own decision to let a pop-up drop at his feet, luck’s influence on David Ross’ glove-eluding bloop, and David Freese’s inability to field a grounder hit just to his left. After that, Wainwright retired 10 of his final 11. And Wainwright himself argues that the Red Sox didn’t hit the regular version of Wainwright, but an imitator who “didn’t show them everything I had. Everything I threw was pretty garbage.”

But when Wainwright was off by just a bit early on, the Red Sox looked totally in control: comfortable taking pitches just off the plate, and comfortable digging in when the count was in their favor. And as easily as you could brush aside Wainwright’s bad outing as bloops and grounders, you could note how near he came to allowing a sixth, seventh, and eighth run on David Ortiz’ fence-clearing sacrifice fly.

If the Cardinals were using a rotation of zone-pounders in this series, we might actually expect them to reap an advantage from it. But they won’t. Michael Wacha ranked 184th in zone rate this year, out of 381 pitchers. Joe Kelly ranked 294th. Lance Lynn was 111th. And Wainwright, back most probably for Game Five, 154th. It’s a staff that is certainly good enough to quiet the Red Sox, but it’s a staff that suits Boston’s approach just fine.

You need to be logged in to comment. Login or Subscribe
MikePemulis
The Cardinals got a starter that ranked 37th in zone rate this year, had an ERA one crap start over 3.00, gave them 14 QS and was their second best starter over the course of the season IMHO.

Should Cardinals fans be lobbying for Shelby Miller to start a game against the Sox given he's probably the best matchup option or is there a strong case that he should stay in the pen?

I know he wore down towards the end of the season but his arm has gotta feel pretty good at this point given his negligible workload over the last month.
Reply to MikePemulis
MikePemulis
Also, this is just at a quick glance but it looks like of the guys ahead of Miller on that list, only about a dozen are full-time legit starters.
Reply to MikePemulis