The high value of the out is somewhat misleading—that includes things like the reaching on error, which we separate out in our current linear weights implementation. But here, the source of error comes from the potential differences in baserunner advancement. It makes a certain kind of sense—an Adam Dunn double and a Juan Pierre double present different opportunities for a runner at first to advance, for instance. (A Juan Pierre double is probably closer to an Adam Dunn single, and an Adam Dunn double is probably a good chance at a triple for Juan Pierre.)

So now you’re reduced your estimated error without changing your run estimates! Congratulations. The downside is that you’re now measuring your error against something that I suspect most people have a hard time understanding. You’re getting pretty far into the weeds of hypothetical runs, rather than measuring against a good proxy for actual runs, like what we did last week.

Another thing we can do is look at the change in run expectancy for each event. This isn’t a particularly new idea (Gary R. Skoog came up with it in 1987, calling it the Value Added approach[i]), although it hasn’t been especially popular because of the play-by-play data needed to compute. Let’s pull up the same run expectancy chart we used last week:

This approach, needless to say, does a much better job of reconciling with actual runs scored than the linear weights approach. It also comes closer to measuring performance “in the clutch,” although it ignores inning and run differential (we’ll talk about that at a later date). So why not use it instead of linear weights? The data needed to power it is readily available now, at least for the modern era, as is the computing power required to accomplish it.

The issue—if you’ll remember back to our goals laid out in the first week—is that we want to avoid over-crediting a player for the accomplishments of his teammates. A player is not directly responsible for the base-out states he comes to bat in; that’s the product of the hitters ahead of him in the lineup. But if you look, there’s a substantial relationship between the average absolute Value Added of the situations a player comes to bat in, and the difference between his linear weights runs and his Value Added runs (per PA): 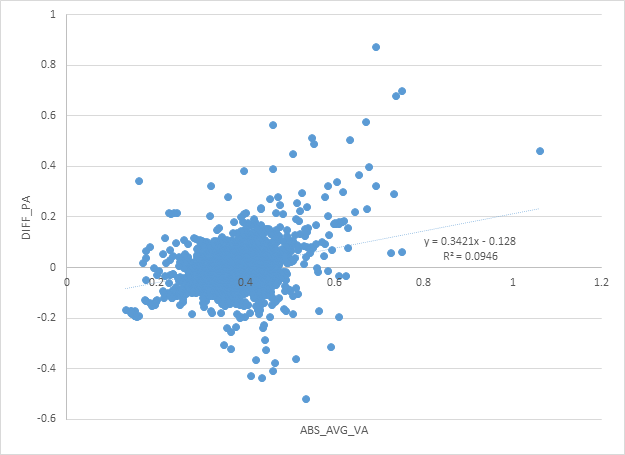 In other words, a player’s Value Added is driven in part by the quality of opportunities he has, not simply what he does with them. The ability for a player to impact plays is greater in some situations than others, and players who get to bat in those situations more than the typical player will have more of a chance to accrue Value Added.

There is still a substantial relationship between linear weights runs and adjusted Value Added—most players won’t see a drastic change. But some will. Take Robinson Cano, for instance. In 2009, he had a pretty good offensive season by context-neutral stats, batting .320/.352/.520 in 674 plate appearances. That’s good for 25.5 runs above average. But Cano had some pretty pronounced splits that season, hitting .376/.407/.609 with the bases empty but .255/.288/.415 with men on. Cano’s “clutch” performance was so bad, he ended up being worth -1.6 adjusted Value Added runs, worse than the average hitter despite hitting well above average for the season on the whole.

It comes down to what we want to measure—do we want the context-neutral runs, which say Cano was a superb hitter in 2009? Or do we want the clutch-based Value Added runs, which say he was below average? Or should we present both, and let readers decide which they prefer? Here’s your chance to weigh in. We’re not taking a poll—it’s not an election, per se. But we’ll listen to arguments on both sides, and I promise you that this isn’t a trick question.

[i] Some analysts, such as Tom Tango, refer to this as RE24.

When I am playing fantasy, I really do not care how good the player is in theory. If he is assigned high leverage situations, I don't want that sorted out. After all, I seek out players who are placed in high-leverage situations.

If I am asking who the best ballplayers are, who makes the most of the opportunities, then I want the de-leveraged values. Comparing second basemen who bat second on one team and sixth on another really requires de-leveraging.
Reply to ErikBFlom
Mooser
So RE24/boLI?
Reply to Mooser
TangoTiger1
That's correct. I expand further on my blog if you are interested.
Reply to TangoTiger1
BurrRutledge
Thanks for the opportunity to peak behind the curtain, Colin. I have more questions than opinions at this point.

2) How long would it be expected to take for a player's context neutral performance and his clutch performance to stabilize? Can the metrics be developed to account for that?


Reply to BurrRutledge
pjbenedict
Regarding linear weights and adjusted Value Added: Which has been a better predictor? I realize that's not the point of WARP, but wouldn't the answer to that question point to which measures a stable attribute more effectively?

Reply to pjbenedict
cwyers
Linear weights, almost assuredly. As you note, though, that's not the point of WARP.
Reply to cwyers
Mooser
How many years of Value Added runs do you need (or PAs)in order for Value Added runs to become just as good an indicator as Linear Weights. If its only like 3 years (rather than say 10) I would like to see a 1 year WARP with Linear Weights and a 3 year WARP for Value Added Runs. Anything more than 3 year WARP is likely useless in terms of determining True Talent as then you get into aging factors etc.
Reply to Mooser
cmaczkow
I think this is a fascinating question, because it really boils down to "What do you want the stat to actually indicate?"

My own personal preference would be the context-neutral value, for two reasons. One reason is that I think the context-dependent value can be so different from the overall stats (such as the Cano example) that it will be difficult to sell to most fans without extensive explanation.

But my main reasoning is this: When I look at a stat like WARP, my brain translates that into "How good was this player?" And when I think about how good a player is, I tend to think of the aggregate of what he's done. In that perspective, the context and timing of each discrete event is essentially random. In other words, unless there is reason to believe that "context-based hitting" is a skill, my thought is that a context-based pattern is just noise.

An analogy might be that you are going to flip a coin ten times and you get 1 point for each tail in the first five, but 2 points for each in the second five. If your exercise gives you five heads and five tails, I want the probability described as 50%, even if tails actually came up in 4 of the last 5 tosses and thus was actually "worth" more.

Again, this is assuming that player ability doesn't actually change based on context. I guess in a perfect world the stat could combine both factors (especially if we learn that contextual performance really IS a skill and consistent over time). Maybe something like WARP = xx.xx (y), where xx.xx is the value based on the aggregate and (y) is a rating/grade/classification/number that tells us how much his "real" (context-based) value differed from his aggregate value.
Reply to cmaczkow
cwyers
Well, as I am fond of saying (and if you play the Colin Wyers Drinking Game, this is a Babylon 5 quote, so take a shot), Understanding is a three-edged sword -- your side, their side, and the truth.

When I poll readers on my blog, there's an equal divide. Some are interested just in what happened at the time it happened, and others are just interested in the outcomes as if they happened in a vacuum.

Basically, we always need to have multiple versions of whatever metric you create, because everyone is coming to the table look for answers to different questions. And we're not able to find "common" questions enough to allow us to present just one version.

Reply to TangoTiger1
ncsaint
Why choose between them? It seems to me that the best reason to keep leverage out of WARP is that we already have RE24/boLI.

Whatever improvements there are to be made to WARP or RE24/boLI, they are telling us fundamentally different things. Usually they'll broadly agree. Sometime they won't. When we see them diverge, we learn something interesting and important about the performance of a player.

Why muddle the signals?
Reply to ncsaint
Mooser
Because WARP includes defence and baserunning. That being said, if your going to include non-context neutral batting runs (RE24/boLI) than doesnt the defence and baserunning components need to include context as well. I suppose with play by play data we have the ability to do that, but I think it needs to be consistent.
Reply to Mooser
cwyers
As Mooser notes, WARP is much more than just offense -- the direct counterpart to adjusted Value Added isn't WARP, it's Batting Runs Above Average (or linear weights, more broadly speaking).
Reply to cwyers
tbunns
Does "Out" include double and triple plays?
Reply to tbunns
newsense
BRAA vs. RE24/boLI is a good (if irresolvable) discussion but the context here is the error bars Colin is attaching to BRAA/WARP.

Colin treats them as statistical (variation from random sampling) but they're not statistical. They're the result of intentionally deciding on a context neutral stat (linear weights) then changing his mind. In this case what the "error" term says is. "I'm giving you the linear weights value but if I wanted to give you the RE24 instead, it's likely to make a difference in a range of X runs, although I could have just gone ahead and given you the RE24 value."

Standard error (of the mean) is a description of the uncertainty as to what the true linear weights average value is, because we have a finite sample. It would be .456 divided by the square root of the number of doubles in the sample
Reply to newsense
mattidell
I would appreciate you present any number of different statistics if they essentially answer different questions.
Reply to mattidell
eliyahu
Late to the conversation here, but I have a separate question: If the Value-Add approach does not stabilize over time to align with the context neutral approach, am I to understand that clutch hitting is an actual skill that is predictive? Over a career, I would expect Cano to balance his poor performance in high leverage situations with outperformance. If, over an entire career, this does not balance out, do we really want to ignore it?
Reply to eliyahu
HPJoker
Could the extra value added be because of the pitcher's strategy with men on base? I could imagine that a home run would be more likely with the bases loaded than with the bases empty because the pitcher is being forced to throw strikes. I don't know if this is true or not, and I don't think B-R has MLB stats.

And please, context neutral. That's the best way of looking at a sample.
Reply to HPJoker