Relief pitchers have been in vogue lately, whether carving out air time on TINSTAAPP or funking up Raising Aces. The RP-Funk All-Stars may have all hailed from the senior circuit, but some of the most impressive performances of the season have come from the American League. Ninth-inning relievers have been dominating hitters and shortening games all across the AL, as no fewer than five different closers entered Thursday's action with an ERA under 2.00. Although he falls just short of inclusion to that particular club this season, we start the show with none other than the greatest stopper of all time.

(all stats through 8/28/13, PITCHf/x stats are courtesy of BrooksBaseball.net)

Mariano Rivera
Mariano's farewell tour provides an opportunity to doff my cap to his marvelous career, and the ageless one is virtually the same pitcher now, at age 43, that he has been throughout his tenure as the end-game strategy in the Bronx.

The 2.20 ERA is excellent, sitting more than 80 percent better than league average, but what is even more incredible is the fact that it is his highest mark of the past six seasons. Mo has posted a sub-3.00 ERA in 17 of his 19 big-league seasons, and finished under the 2.00 mark in eight of the last 11 campaigns. He has been more hittable this season, leading to his highest WHIP since 1997, but 2013 has otherwise been par for the course for a pitcher whose career K-to-walk ratio is better than four-to-one.

Rivera still lives and dies by the cutter, and he has maintained an astonishingly stable level of velocity as he ages into the twilight of his career. Last season's 91.1 mph average is the outlier, as he averaged right around 92.5 mph on his cutter every other season going back to 2009. What is most impressive is Rivera's ability to make subtle alterations to the pitch, making microscopic variations in his angle of supination to adjust his velocity and break, seemingly at will. Many pitchers will show fluctuations in the supination angle of breaking pitches, but in most cases this variation is inconsistent and unintentional, whereas Rivera displays wizard-like command of his stuff.

Rivera has excellent mechanics, which is an aspect of his superiority that should come as a shock to nobody, though some might be surprised that he is merely above average in most of the categories on his mechanics report card. Rivera has everything that you look for in a pitching delivery, but the two grades that stand out are also the key ingredients to his prowess and longevity. Mo has a very slight lean back into maximum leg lift, but nothing egregious, and he does an excellent job of maintaining vertical balance throughout the delivery. His torque is rooted in the timing of rotation, and Rivera repeats that timing and sequencing of his delivery on nearly every pitch. The stability is intertwined with his consistency at release point, while his plus marks across the report card provide the foundation for excellence.

Holland currently ranks fifth in the American League with 35 saves, but his ratios might place him atop the heap of AL relief pitchers. His K-to-walk ratio is an impressive 6.2-to-one, and he appears to have mastered all three of his true outcomes. His league-leading strikeout percentage is offset by a better-than-average walk rate (AL average is 8.0 percent), and the right-hander has surrendered just a pair of homers on the year (and only eight extra-base hits). Right-handed batters have been completely silenced by Holland this season, with a collective .401 OPS against, and lefties have not fared much better (.510 OPS).

Holland brings serious velocity that he has maintained very well throughout his career in the majors, sitting on averages between 95.5 and 96.5 mph over the last four years. He keeps left-handed batters on their toes with fastballs early in the count, including 86 percent of the time on the first pitch of an at-bat, and he finishes them with hard sliders when he gets two strikes on the hitter. He also mixes in a splitter, but only when he gets ahead in the count versus lefties. Holland takes a different approach versus right-handers, eliminating the splitter from his repertoire but offering a greater mix of sliders, including 30 percent of the time on the first pitch.

There is a massive mismatch between Holland's statistical indicators and the mechanics that he brings to the mound. Most pitchers who carry such low walk rates are the beneficiaries of great mechanical repetition, but Holland has a wide range of possible release points when his timing falls off track (which is often). In this sense, he exemplifies the disparity between command and control.

Holland’s center-of-gravity rises along with his leg lift before dropping during the stride phase, and he finishes with awful posture at release point. He begins tilting the spine just before foot strike, and finishes with such imbalance that it sends him scrambling off the first-base side of the mound. His horrific posture obscures the functional advantage that stands behind the low walk rate—Holland's blatant over-the-top motion results in pitches that often miss high or low of the intended target, yet rarely sail wide of the zone. 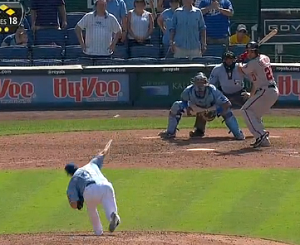 His stuff is so electric that batters will often come up empty regardless of whether Holland hits his spots. Hitters commonly swing late on under-rotated fastballs that sail above the zone, or they flail miserably on buried sliders that finish covered in dirt. Such occurrences allow Holland to maximize K's and minimize walks, even though he gives his catchers fits of frustration in chasing his wayward pitches. Case in point: the previous video featured the second of a pair of identical strike-three swings in the ninth inning versus the Nats, in which the slider short-hopped in front of catcher Salvador Perez, forcing him to make a great play just to keep the ball from scooting to the backstop. In both plate appearances, Holland had set up the bouncers with high heat that sailed far north of the intended destination. The opposing hitters were none the wiser, but Perez earned that night's meal on Holland's tab.

Uehara has set up shop in the land of video game numbers this season. He has the lowest WHIP in the majors for any pitcher with more than a dozen innings under his belt, easily beating the 0.73 mark of runner-up Paco Rodriguez. Even crazier, Uehara's WHIP was just a shade lower last season, giving him 95 innings over the last two years with just 61 unintentional baserunners. He has proven to be virtually unhittable for the past three seasons and rarely issues a walk. His strikeout-to-walk ratio of 8.9-to-one is the class of the American League, yet it stands as his lowest mark of the past three years. Now firmly entrenched in the spotlight of Boston's closer job, Uehara no longer qualifies as a hidden gem.

Uehara essentially has a two-pitch repertoire, with equal doses of fastball and splitters that he mixes in any count against any hitter. A cutter shows up occasionally, most often when he gets ahead of right-handed bats, but it is remarkable that he can silence so many hitters on the heels of 90-mph velocity. His fastball qualifies as a four-seamer, but the pitch has subtle movement on the way to the plate, with just enough arm-side run to induce weak contact. His arm action is the exact same on the fastball and the splitter, but the bottom simply falls out of his split as batters swing over the top.

Uehara invokes a pause as he sidesteps to begin the windup, but he really gets it going once he triggers the first movement toward the plate, with no hint of the mid-stride halt that is so common with pitchers from Japan. The 38-year old may not have amazing torque, but high-end velocity is not his game, and he more than makes up for it with his stable balance, solid posture, and elite repetition of mechanical timing. He essentially places the baseball wherever he wants, allowing him to harness pitches with movement and to bury splitters on command. The above video clip demonstrates this well, as Uehara essentially nails his target, but catcher Jarrod Saltalamacchia gets fooled enough by the movement on the split to raise his glove before dropping back it down into the original setup location.

Uehara starts on the first-base side of the rubber and initiates a closed stride, but he is perfectly aligned with the center-line by the time that he reaches release point. The follow-through gives the appearance of violence, and he has been known to slap the glove with his throwing hand after releasing the baseball (see GIF), but don't be fooled into thinking that the resulting flail of the glove-side reflects any lack of control in his delivery.

You need to be logged in to comment. Login or Subscribe
aschauer
outstanding as always, Doug. i'm really raw at scouting, though, so i have a question: in the gifs, Uehara looks like he has much less spine tilt than Mo, but you ranked the yank a half tic better in posture. do my eyes deceive me? is there more to posture than spine tilt? thanks again for the great article!
Reply to aschauer
tombores99
Great question, and thanks for the kind words.

The key is posture at release point, and Rivera's is a notch better when you freeze-frame. I had to double-check as well, because Uehara stabilizes his head just after release point, which deceives the eye. Uehara's posture is actually at its worse at the point of release, and he would earn a higher grade if taken just before or just after the ball leaves his hand.