The Thursday Takeaway
The 2013 Nationals, fresh off a terrific 2012 season that was halted by the Cardinals in the National League Division Series, were supposed to be a juggernaut. The question was not whether Washington would earn a second straight playoff appearance, but whether the Nats could win the pennant or perhaps even a World Series title.

For 104 games, just about everything that could have gone wrong went wrong. Injuries struck Bryce Harper and Jayson Werth. The high-upside gamble on Dan Haren looked foolish in the early going. And hits with runners in scoring position were harder to come by than compromises on Capitol Hill. On August 7, the Nationals were 54-60, 15 ½ games behind the Braves in the East and nine games out in the wild card.

Thinking, at that point, that Davey Johnson’s team could recover and make a run at the National League Central runners-up seemed crazy. But those who dared to foretell four-plus months of misery for the Nationals before Opening Day might have been called crazy, too. Since that low point, Washington has won seven of eight and 14 of 19. And Jayson Werth, one of the driving forces behind their awakening, thinks they have more craziness left in store.

Werth reached base four times in as many plate appearances on July 4, the first game of what would become the Nationals’ first four-game winning streak of the season. Many of his teammates continued to scuffle, and the brief spurt appeared to be nothing more than a tease when Washington fell to six games below .500 a month and two days later. But Werth, who went 3-for-4 and delivered a three-run blast in the sixth inning of yesterday’s 9-0 rout over the Marlins, never looked back.

In between those games, he batted .396/.487/.654 with five doubles, a dozen homers, 29 walks, and only 26 strikeouts. The $126 million man was pulling his weight. All he needed was for his teammates to start carrying theirs.

Denard Span is in the midst of a 12-game hitting streak, which ties the longest such run of his career, and his batting average touched .273 on Thursday for the first time since June 9. Harper cranked his 19th home run of the season in yesterday’s victory and is 18-for-44 (.409) over his past 11 games. Ian Desmond slugged long ball no. 20 in garbage time, his third round-tripper in five games, and has notched multiple hits in each of the Nats’ last four contests.

Now the Nationals are 6 ½ games out, with the Pirates scuffling and the third-place Diamondbacks only a half-game ahead. That’s a lot of ground to make up with fewer than 30 games left to be played, but of the Nats’ last 29, 20 will come against the Marlins, Mets, and Phillies.

Quick Hits from Thursday
The Athletics dropped a season-high six runs (five earned) on Max Scherzer and chased the Cy Young Award hopeful after just five innings with six extra-base hits on his line. Brandon Moss went deep for the third straight game, including a two-homer effort on Wednesday, running his power surge to seven big flies in 10 games. And Bartolo Colon brought his early-season form to the mound in his return from the disabled list, scattering seven hits, all of them singles, to hand Oakland’s bullpen a 6-1 lead after five.

But for the A’s, the good news ended there. Luke Putkonen, Jose Veras, and Joaquin Benoit shut them down over innings six through nine, and Jerry Blevins served up a two-run blast to Prince Fielder that drew the Tigers to within three. This was the sort of game that, locked in a tight battle with the Rangers for the West division title, Bob Melvin’s squad could not afford to cough up. But Grant Balfour, nearly flawless in save situations to this point in the season, coughed it up in style.

You could pin what happened in the bottom of the ninth on mystical forces that ensure that Scherzer, still 19-1 on the year, cannot suffer a loss, or on the fact that Balfour, with a 1.76 ERA and a 3.32 FRA, was due for a severe correction. Either way, for the A’s, this one hurts.

Led by Moss and a red-hot Coco Crisp at the top of the order, the Athletics teed off on the Tigers’ vaunted rotation, leaving Anibal Sanchez, Justin Verlander, Doug Fister, and Scherzer with an 8.55 ERA for the series. A sweep would have brought them to within two games of the Rangers. But Balfour “went out there with nothing,” and—with two runs in, two runners on, two away, and two strikes separating the Athletics from an outstanding sweep—Torii Hunter made him pay.

Hunter’s three-run walkoff blast was the first by a Tigers player against the A’s since July 10, 1983. For that fourth-place Oakland club, which finished 74-88, Lance Parrish’s yardwork was a distant memory by the end of the season. But if the 2013 bunch falls a game short of the Rangers or stumbles in the wild card race, this defeat won’t soon be forgotten.

Ubaldo Jimenez has rarely flashed his 2010 form since coming to Cleveland in a trade the following year, but on Thursday, he did something that he’d never done, even during his All-Star season with the Rockies. The 29-year-old struck out 10 batters without issuing a walk, which—in tandem with his 10-punchout performance against the Twins on August 23—made him the first Indians hurler to fan double-digit batters in consecutive starts since CC Sabathia did it in 2008.

In that start versus Minnesota, Jimenez allowed two runs over six innings, but the Indians scored only one the whole game. Last night, Jimenez brought an electric arsenal to the bump and made only one big mistake. Unfortunately, that mistake cost him three runs, and the Tribe, once again, could muster only one.

Jimenez’s heater touched 97 mph in his seven-inning, three-run effort against the Braves, and he controlled all three of his secondary offerings well. His changeup and slider were particularly sharp. But with runners at the corners, two outs, and Brian McCann at the plate in the bottom of the third inning, he let a slider get away. 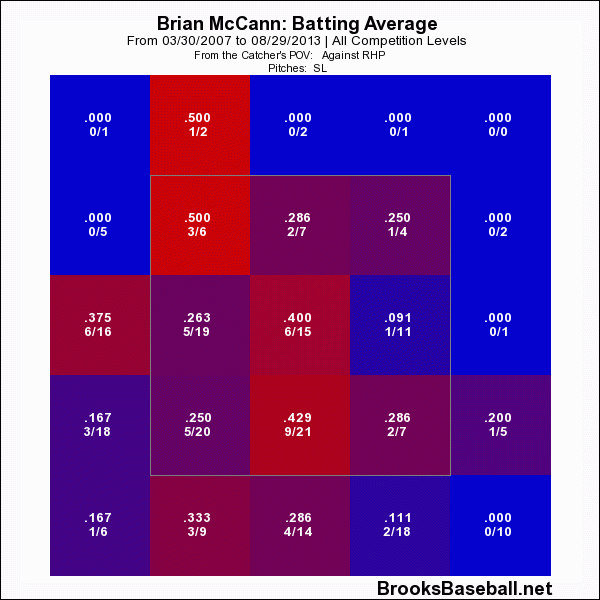 The count on McCann was 1-1, the product of a first-pitch curveball strike and a two-seam fastball in the dirt. Catcher Yan Gomes called for a backdoor slider, a pitch that can give the Braves’ backstop trouble when it’s located on or just off the outside black. Jimenez’s slider started there—but that was bad news, because it meant the pitch was destined for McCann’s knee-high hot zone down the middle of the plate.

Into the hot zone it sailed, and deep into the bleachers it flew. With Kris Medlen dealing for the Braves, the mistake was Jimenez’s ticket to a dubious feat that no Indians pitcher had accomplished since Dennis Eckersley in August of 1976.

Given the question marks surrounding their rotation, the Tribe can’t afford to squander quality efforts from the mercurial Jimenez. Terry Francona’s club has now lost three in a row, falling behind the Orioles in the wild card race, where it also trails the second-place Athletics by four games. With a visit to the Tigers, who now enjoy a 6 ½-game cushion in the Central, next on the docket, and the Orioles coming to Cleveland after that, the Indians must get back on track quickly to retain a chance of capitalizing on their cakewalk late-season slate.

Defensive Play of the Night
The Astros suffered their 89th defeat of the season on Thursday, ceding a 3-2 decision to the Mariners, but while they came up short at the plate, they did plenty of fine work in the field.

That catch, which Barnes made while falling backward, preceded a two-run homer by Franklin Gutierrez, so it saved a run in what, at the time, was a 1-0 game.

In the ninth inning, with the score now 3-2 Seattle, Dustin Ackley slapped a ball into the 5.5 hole, giving Houston’s middle infielders a chance to showcase their chemistry. Shortstop Jonathan Villar ranged well to his right to field the grounder, and by that point, his only play was a force on Gutierrez, who was running from first. Villar planted his back foot at the edge of the outfield grass and fired a one-hopper to second, where Jose Altuve made like a first baseman and came up with the scoop to complete the 6-4 fielder’s choice.

You need to be logged in to comment. Login or Subscribe
Tythelip
When the shortstop throws to the second baseman we call that a 6-4 fielder's choice.
Reply to Tythelip
bornyank1
Fixed.
Reply to bornyank1