Frank Menechino was the first position player I ever saw pitch. It was 2004, and I was understandably excited by this event. I set off for the internet to research the history of the position player pitching, hoping to find every game in which this had happened. After a few hours, I realized with disappointment that it wasn’t as rare as I’d hoped it would be (it’s no hidden ball trick).

That was a big year for position player pitchers. Ten games featured everyday hitters taking the mound, with Dave McCarty making three appearances.* It wasn't always this way: 2003 and 2005 had just one each—Wiki Gonzalez and Sean Burroughs—and there were none in 2006. Twitter would’ve been so bored. 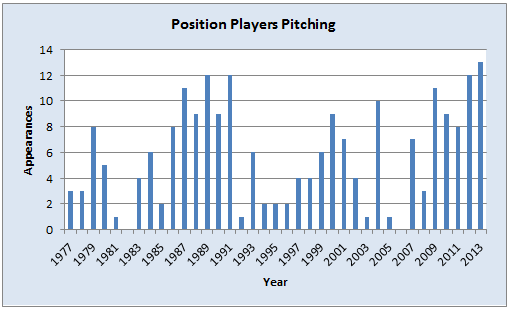 I’m hesitant to declare any pattern here. There’s potentially one if I take a subset: position players pitching in extra innings. Saturday’s marathon makes this the sixth straight year that this happened. Before 2008, there were only three such occurrences. Here’s the list:

Position players pitch frequently in blowout games. Extra-inning appearances, however, suggest that the manager has exhausted his bullpen. He sends a position player into the high-leverage spot and the history books gain another entry.

With only one qualifying game per year, I will be extra cautious in designating this streak as a “trend." But let’s call it a trend, because there is some reasoning behind it. While the number of extra-inning games each year is random, bullpen usage isn’t. Lately, managers have used more relievers, and the number of innings they pitch have steadily decreased. This chart will demonstrate: 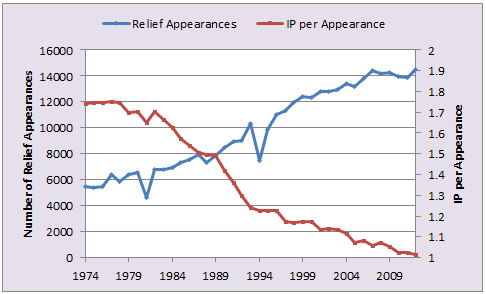 Though there may be other effects in play, the rapid reliever swapping coincides well with the yearly streak. Many extra-inning games become marathons, but only so many of them run out of pitchers.

And when position players are introduced, they spell the end. Except for Jose Oquendo’s miraculous four-inning outing in 1988, no game has lasted more than two innings once the position player took the ball. As much as we root for him to blow a fastball by opposing hitters, we’ll know that we'll probably be sleeping soon.

You need to be logged in to comment. Login or Subscribe
walrus0909
An earlier article hypothesized how the decreased run environment contributed to the rise in extra inning marathons. And yes you could combined this with the reduction in IP/appearance to explain the position players pitching in extra innings thing. But I don't want to talk about that.

Can we instead talk some more about that Braves-Cardinals game? Jose Oquendo pitched four innings, which is great, sure. But at the same time Oquendo took the mound, the Cardinals put the previous day's starter (Jose DeLeon) in left field ... and then kept shuttling him between right and left fields depending on the batter in a way I didn't think was legal outside beer-league softball. Seriously, DeLeon is listed in the boxscore as "LF-RF-LF-RF-LF-RF-LF-RF-LF-RF-LF-RF".

And then he was lifted for John Tudor, *another pitcher*, who pinch-hit for him in the 19th. On the one hand, Tudor pitched 2 days before, but on the other hand, he'd only lasted 3.2 innings ... that is, a third of an inning less than Jose Oquendo.

http://www.baseball-reference.com/boxes/SLN/SLN198805140.shtml
Reply to walrus0909
gobobbygo
That's not the first time that happened, either. Jesse Orosco and Roger McDowell alternated between the outfield and pitching on July 22, 1986. Ray Knight and Eric Davis got into a fight and Knight was ejected, and then the game went 14. I have a vague memory of one of the announcers mentioning that Pete Rose was pissed, not because he thought the outfield/pitching switch was illegal, but because he thought they weren't entitled to warmup pitches every time they came back in from the outfield.

Not as extreme as the game you describe - looks like they each only pitched twice. But at one point Davey Johnson also had McDowell and Mookie Wilson switch places from LF to RF.

http://www.baseball-reference.com/boxes/CIN/CIN198607220.shtml
Reply to gobobbygo
Michael
Seems like ever since Jose Canseco injured himself pitching, teams usually don't bring their star batters to pitch.

Checking this out a bit, I see Michael Cuddyer in 2011 and Nick Swisher in 2009 pitched, but for the most part, very few star batters take a turn pitching since about 2001 or so (which is considerably after the Canseco incident).
Reply to Michael