I basically believe in defensive metrics. I know there are a lot of people who don't, and that's fine; I don't necessarily have a good reason for believing in them, and maybe I'm just outsourcing the job of inadequately assessing defense to another person's brain, but I basically believe in them. So I know that Andrelton Simmons is spectacular defensively, somewhere between an all-time great shortstop (we have him at +19, and UZR has him at +21; he's got a reasonable chance of topping Ozzie Smith's best season by FRAA) and The All-Time Great Shortstop (Defensive runs saved has him there already, at +37). I believe in defensive metrics but I regress them heavily in my mind, so I doubt he's The All-Time Greatest, but I understand he's having a fantastic season. I understand it even though I can't really recall a single play he's made, and even though I've never really sat down and watched him exclusively for any length of time.

So today I'm going to watch him (and his highlights) exclusively, for a few hours, and make sure I can recall some plays he has made. These are not necessarily his best plays. Jeff Sullivan wrote about Simmons' defense the other day and showed "some of 2013 Simmons’ most impactful defensive plays, with regard to Defensive Runs Saved." In other words, the plays he made that the fewest number of other shortstops make. I'm not interested in such precision. For precision, I have the metrics. I'm interested in just watching.

Setting the scene here, this is where the play is going to end up: 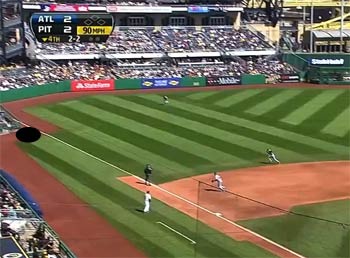 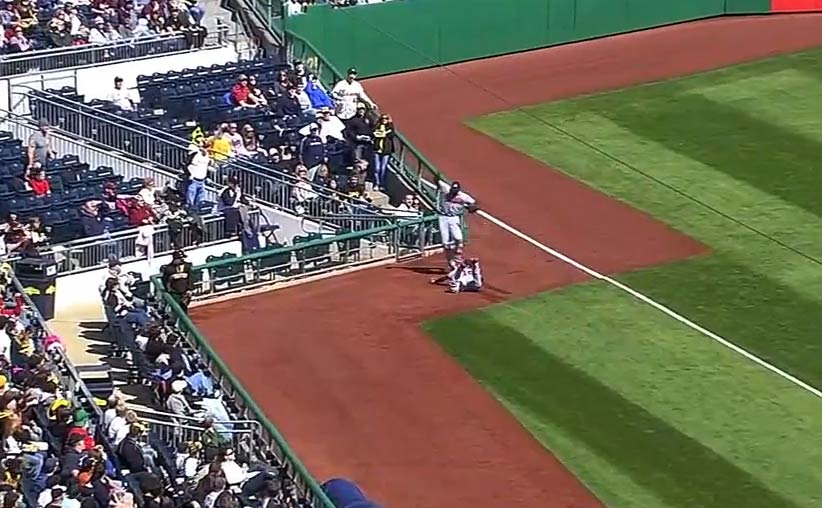 Pop-ups aren't my favorite highlights, because you either get there or you don't, but in this case Simmons runs 19 steps, dives face-first into the dirt, almost gets spiked in the head by his teammate and has to be at least moderately aware that he's about to run into the left-field (!) wall. So here's that catch:

Setting the scene here, a pair of pictures of Andrelton Simmons: 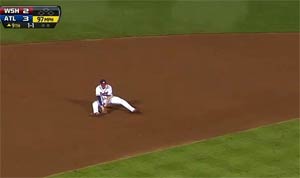 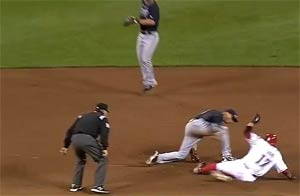 Two separate plays. On the left, Simmons is sitting on his bottom. A baserunner is on his way to first base, and it is going to take him 4.24 seconds to get there, because he is fast. On the right, Simmons is doing a through-the-legs tag. No suspense on that one. I'm just putting it out there, right up front: Simmons is going to reach down, through his legs, to tag a baserunner out, because otherwise he's maybe going to fall over on his face and not tag the baserunner out.

These are both sort of gimmicky highlights. The one on the left was an accident; Simmons came in on the ball, fell onto his butt, and still threw a fairly hard strike to first base to get the out. Necessarily so: with that strong throw, it took 4.24 seconds for Simmons to get the ball to first: 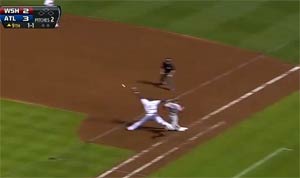 It's not a real highlight so much as it's a blooper with a twist at the end.

The one on the right is sort of an accident, and a credible highlight, if you believe it's necessary. I'm not 100 percent sold on the idea that the throw was actually wild. Here's where he caught it: 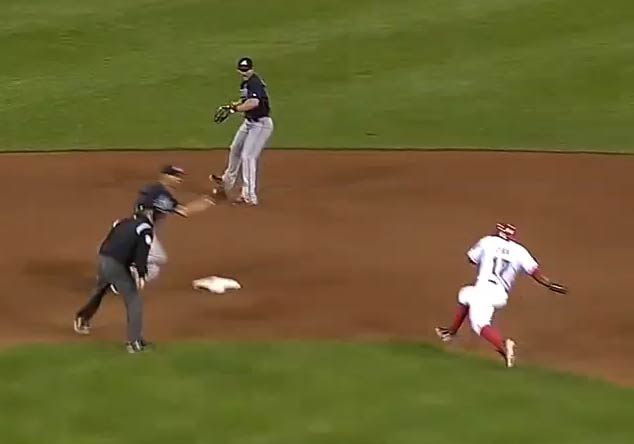 And then he sort of tumbles and puts the tag down. I'm not saying Simmons did it to show off. He probably didn't. It was probably a spectacularly clever play, invented out of necessity. But I'm saying the question is in my mind. Anyway these plays looked like this:

Setting the scene here, this is a picture of Andrelton Simmons: 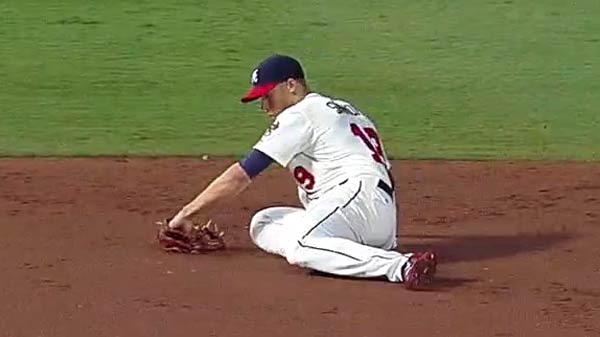 Here's Simmons, on his butt, chilling. Drawing in the dirt? Thinking about a girl? Maybe just got punched? Maybe done some drugs? Maybe he's trying to Tebow and he's terrible at it? Maybe was just transported, Terminator style? Maybe has a hole in the crotch of his pants and doesn't want us to see? Maybe just found a glove on the ground and is checking it out? Maybe his foot fell in a hole? Maybe there are some ants? Maybe just a little emo today?

So here's how he got from that position to turning a double play:

And here's another pretty one in the genre:

Setting the scene here, this is where Simmons sets up, 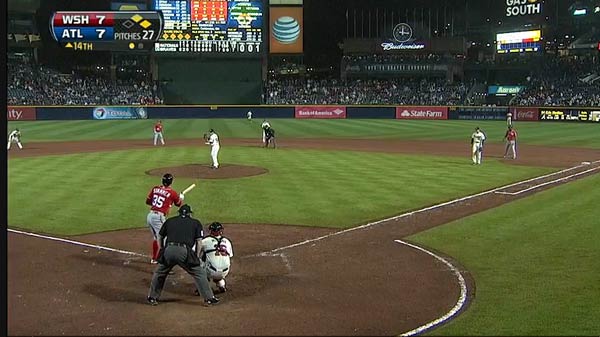 and as the pitch comes in, he takes off running to cover third base, 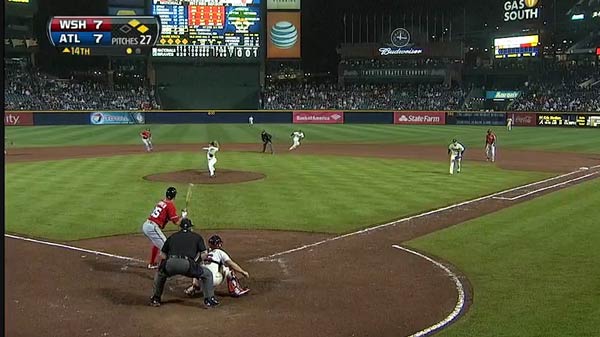 so that as the pitch is delivered he is not only out of the frame, a good 50 feet or so from second base, but he is literally running away from second base. Now I want you to imagine him turning a 6-3 double play on a groundball. Do that for me.

It starts off screen. All we can see is his shadow stop. 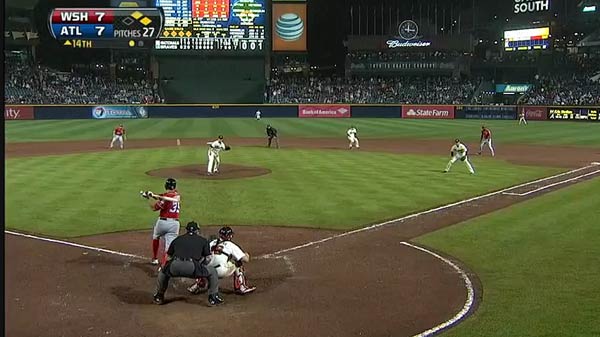 When he reappears, though, he is under control and sprinting in into the baserunner's path, 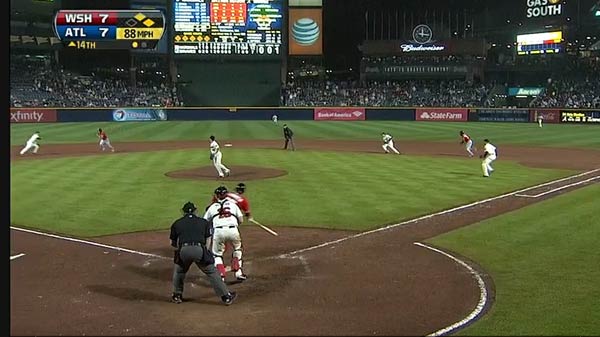 The ball is hit up the middle, slowly. He has to sort of avoid the baserunner, then field the ball at the front of the dirt, actually slowing down slightly to grab it. See Dan Uggla in the shot above and know that he's not going to be near the bag to take a toss, so he reaches back to field the ball but keeps running toward the base, running a little bit forward and a little bit sideways to keep his body oriented toward first base, absurd, thinking about turning the double play still. He arrives just as Roger Bernadina does, hard. Bernadina will slide right through the bag, his head and shoulders crashing toward Simmons' leg, his helmet getting knocked off by Simmons, Simmons' leg getting spun a bit off trajectory. Dan Uggla, in no-man's land, stands in the line between Simmons and first base. Simmons leaps, into right field, over the baserunner, clear of Uggla, spins his torso toward first base and reaches back. 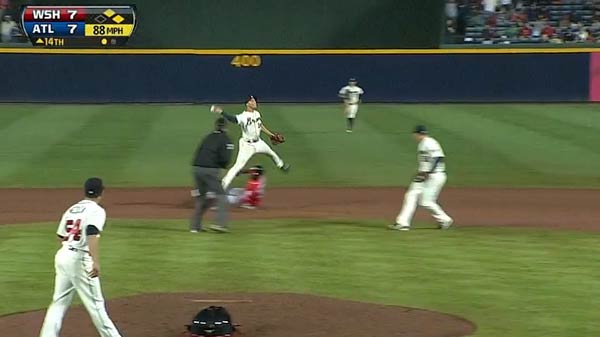 With the quickest little flip, he throws. The throw isn't even in the dirt. It's the 14th inning and it had been raining, if that matters to you.

Watch how late in the play the second-base umpire realizes Simmons is actually going to try to go to second base.

Besides the obvious skill required to cover this much ground (12 steps between his cut back and the leaping throw) and the obvious strength required to complete the throw are what seem to be three distinct acts of brilliance. One is the cut. Even as he runs toward third to be ready for a throw, he keeps his body balanced, so as soon as he sees Stammen's bat come back he's just one step and plant from changing course and exploding in the other direction.

The second is the way he runs ahead of the ball and reaches back for it, rather than slowing up and fielding it in front of himself, knowing that the six inches he would sacrifice waiting for the ball would cost him the force at second. And, finally, there's the way he readies his body for the throw well before he actually makes it. He adjusts his gait slightly three steps before the bag so that he'll be able to take a full stride into the bag and really leap off into his throw. In that final step, his lower half gets to twist into the throw, his left leg kicks up for power, his right shoulder cocks back a bit more naturally. It is (overused cliche) balletic. 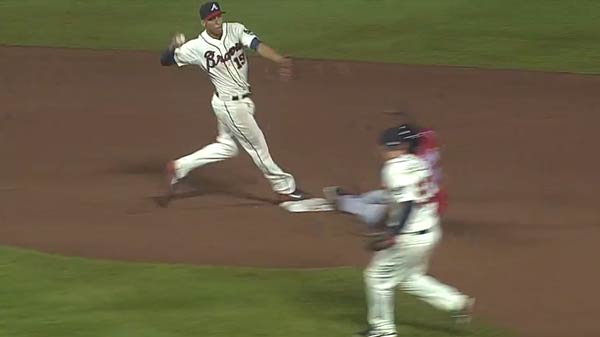 As far as I can tell (from many attempts to recreate it in my living room), it is not a throw he could have made if he had stepped on the bag with his left foot, and it's less likely that he could have cleared Bernadina if he hadn't stepped with a full stride.

Just so we're perfectly clear, this is where Andrelton Simmons is going to be midway through this play: 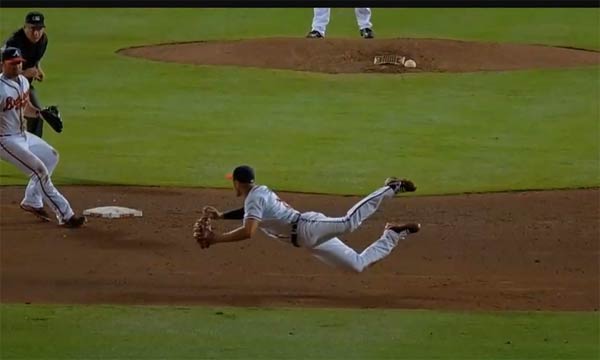 Just flying around, mystifying everybody with his ability to fly and/or levitate, watching the game around him, but definitely not touching the ground. So the play itself is a grounder up the middle that deflects off the pitcher's glove. Simmons gets to it easily, fields it in a slide on his knees, but has to figure out how to get it to second base. He does this by sort of rocking onto his right knee and flinging himself into the air, horizontally, getting situated up there (in the air) and pitching the ball to Dan Uggla at second base. It looks good at full speed

but it looks amazing in slow motion, from center field:

You need to be logged in to comment. Login or Subscribe
Shankly
Great article Sam.
Reply to Shankly
cdt719
I think the wrong gif is under "So here's how he got from that position to turning a double play", it's just the ball on the way to home plate on a loop.
Reply to cdt719
bornyank1
Hmm...try refreshing. It looks like the correct GIF to me.
Reply to bornyank1
gtgator
Love watching him play defense. To me, his best this year was on a play where he didn't get the out, so it doesn't usually show up in his highlights. But in a game against Pittsburgh (I believe), he flipped the ball behind his back to his bare hand to enable him to make the throw to 1B. Had he gotten the out, I would guess that would have been No. 1
Reply to gtgator
danugglasforearm
Here's the clip:
http://www.youtube.com/watch?v=aWb_5a41qhE
Reply to danugglasforearm
Yefrem
Silky smooth. There's a renaissance in these obscenely spectacular defensive shortstops, highlighted by Simmons and Iglesias. Great job, Sam!
Reply to Yefrem
ddufourlogger
I agree. I miss the .240 slap-hitting defensive whiz shortstops. I hope they're coming back in vogue!
Reply to ddufourlogger
edwinblume
Wow. Just wow.
Reply to edwinblume
rawagman
That was wonderful. Thank you
Reply to rawagman
hotstatrat
Bravo. It's a great time to be alive seeing all this.

I'm wondering if Ozzie Smith was this amazing.
Reply to hotstatrat
fsgillispie
Yes. He was.
Reply to fsgillispie
casejud
Greatness Sam. You and Andrelton
Reply to casejud
RossBukouricz7
The GIFs under 3 of him popping up are just so amazing. Would never get on the typical ESPN style highlight show on their own, but are the most impressive part of the play. Plenty of guys can get to balls, not many can do something like that to get back on their feet to make the throw.
Reply to RossBukouricz7
hokunpark
Sounds stupid, but I had Andrelton Simmons on my fantasy baseball team solely because I love his defense. He's not actually a contributor, but I just like having an excuse to follow his defensive highlights.
Reply to hokunpark