The Thursday Takeaway
For a while, it seemed as though the Rays might not miss a beat in the absence of Alex Cobb, their most reliable starting pitcher during the first two-and-a-half months of the regular season, who was struck in the head by a batted ball on June 15. From the following day through July 30, Tampa Bay led the American League with a 2.64 team ERA.

But as the adage goes, you can never have too much pitching. Matt Moore succumbed to elbow soreness after a rough start in the Bronx on July 28. Jeremy Hellickson, who stepped up when Cobb went down, has been shelled to the tune of nine runs in 7 2/3 innings over his first two August starts. And from the trade deadline through August 14, the Rays’ 5.38 club ERA was the second worst in the majors, ahead of only the Angels’, whose efforts on the mound were so brutal that even their beat writers got snarky.

Last night, Cobb returned from the disabled list, his concussion symptoms gone and his blister trouble resolved. He wasn’t perfect—far from it, in fact—but he flashed signs of the early-season form that kept the Rays afloat when mainstays like David Price and Hellickson were scuffling.

The 25-year-old right-hander brought his typical low-90s fastball velocity to the bump, and along with it an effective changeup and curveball that coaxed four swings-and-misses apiece from the Mariners’ lineup. All told, Cobb threw 88 pitches, 53 of them for strikes, 11 of which came via whiff. The only blemish on his five-inning, one-run line was a solo shot by Raul Ibanez with one away in the second.

Ibanez went yard on a 3-1 challenge fastball forced by Cobb’s inability to paint the edges with pitches two, three, and four after notching a questionable first-pitch strike courtesy of home-plate umpire Jordan Baker. Leadoff man Brad Miller smoked a line drive to kick off the game that James Loney snagged to help Cobb avoid going into the stretch early. And after Dustin Ackley doubled on a hanging curveball with two outs in the fifth inning, Cobb walked Henry Blanco and Miller, putting himself on the brink of removal with only 14 outs to his name.

That’s the bad news. Here is the good:

The seven-batter stretch that separated Ibanez’s home run from Kendrys Morales’ fourth-inning single was vintage—well, April and May—Cobb. Justin Smoak grounded out and Michael Saunders struck out to end the second. Ackley, Blanco, and Miller all grounded out in a seven-pitch third. Nick Franklin and Seager went down swinging to begin the fourth. For those 2 1/3 frames, Cobb was on cruise control. And though he seemingly ran out of gas in the fifth, he retained the confidence to throw three consecutive changeups to fan Franklin once more and strand all three Mariners on base.

Then the Rays went to bat for their resurgent starter, providing him with the support he needed to take home a win. Sam Fuld singled. Sean Rodriguez singled. Wil Myers doubled home both of them. And Evan Longoria plated Myers and himself with a two-run blast that gave Tampa Bay a 5-1 lead heading into the sixth. The Rays tacked on insurance runs in the seventh and eighth, but those were superfluous. Alex Torres, Jamey Wright, and Wesley Wright held the line in innings six through nine to seal the 7-1 victory in the rubber match.

To manager Joe Maddon, Cobb looked no worse for the wear of the blow to the head on Eric Hosmer’s line drive and his subsequent recovery. As he settles back in, his stamina and command should fully return. For a Rays club that trails the Red Sox by two games in the American League East and whose wild-card cushion has been trimmed by a 4-7 start to the month of August, a healthy Cobb could be a vital addition down the stretch.

Thursday’s Matchup in Review
Heading into yesterday’s matinee, the track record between Lance Lynn and Andrew McCutchen tilted strongly in favor of the Cardinals’ starter. The Pirates chased Lynn after just 5 1/3 innings of work, with four runs on eight hits and a walk on his line, but the right-hander fared well again in his three meetings with McCutchen.

The first of those meetings came with Starling Marte on second base and one away in the top of the first. As I mentioned in the preview, Lynn has typically pitched McCutchen middle-away (and farther to the catcher’s right) with a mix of fastballs and cutters. That’s what he did here:

The first three pitches in this at-bat were all fastballs, the second generously called a strike by home-plate umpire Alan Porter, who gave both teams the usual leeway with the outside corner to right-handed hitters. Pitch four was a slider, an offering that PITCHf/x had previously categorized as a cutter, and it broke far enough away that McCutchen was only able to nick it into Yadier Molina’s glove. The result was the eighth strikeout in 21 head-to-head at-bats between McCutchen and Lynn.

McCutchen grounded out leading off the fourth inning and flied out to end the top of the fifth, a frame in which the Pirates tagged Lynn for four runs. In the middle of that third at-bat, Lynn threw McCutchen a rare curveball—the first bender that McCutchen had seen from him in 16 plate appearances. McCutchen chased the curve, which crossed the hitting area well below the knees, supplying another bit of evidence that he remains behind the eight ball when Lynn is on the mound.

Matchup of the Day
Most left-handed hitters don’t enjoy facing Tom Gorzelanny. He has stared down 798 of them in his career and limited them to a .226/.293/.362 triple-slash line, walking 63 and striking out 190. This year, which Gorzelanny has split between the Brewers bullpen and rotation, lefties are batting only .173 against him.

Jay Bruce, however, is not most left-handed hitters. He has stepped in against Gorzelanny 17 times and come away with three homers and five walks, good for a 1.755 OPS. That’s the highest mark any same-side batter with at least 15 plate appearances versus Gorzelanny has compiled. No one else is close. The runner-up, Adrian Gonzalez at 1.009, is more than 700 points lower.

Gorzelanny has worked primarily in relief since 2012, and he split his time evenly between roles in 2011, making 15 starts and 15 trips to the bump out of the pen. Gorzelanny’s five most recent meetings against Bruce have come in relief assignments for the 31-year-old lefty. When they last squared off multiple times on the same day, the date was August 27, 2010, and the results weren’t pretty for Gorzelanny: Bruce went 2-for-2 with a walk and two home runs.

In Bruce’s first plate appearance, Gorzelanny could not get him to chase a 3-2 slider down and away. In his second, Gorzelanny—apparently determined to stick with the slider after serving up a fastball-heavy diet earlier in the game—coughed up a hanger and paid the price. In his third, Gorzelanny went back to the fastball, and he put the very first one he threw on a tee. 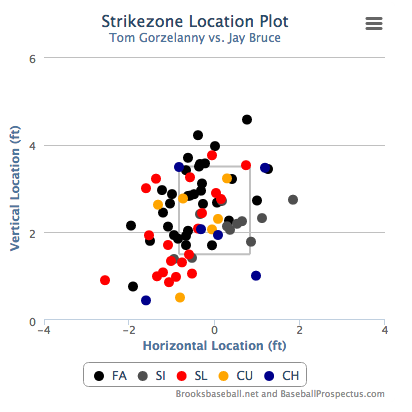 In part because of the time he has spent as a reliever, Gorzelanny has essentially attacked Bruce with a two-pitch mix (three if you separate sinkers from four-seam fastballs). This year, Gorzelanny has scrapped his curveball altogether, and he has reserved his changeup almost exclusively for righties. What Bruce has seen in their recent encounters is what he will get again tonight.

That’s not necessarily good news for Gorzelanny, because some of his best results against Bruce have come with the curve and changeup. He struck him out twice on May 8, 2010, once on a changeup and once on a high fastball that followed two straight benders. Gorzelanny started each of Bruce’s three trips to the plate (the first of which ended with a single) with a curveball that day. He has not thrown him one since. 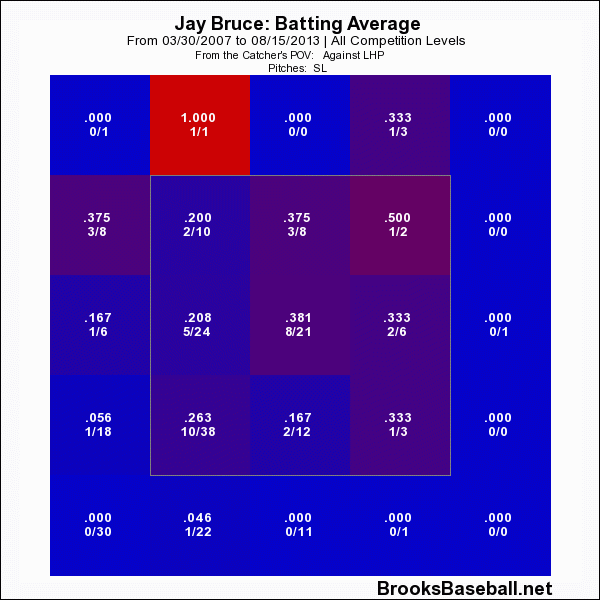 In theory, the fastball-slider approach should serve Gorzelanny well against Bruce, who struggles with breaking pitches that dart away. In practice, that has not been the case. Better command, which Gorzelanny has displayed while posting a 2.51 ERA in 71 2/3 innings this year, will be critical. The left-hander has learned on several occasions that with Bruce in the box, he can’t afford any location mistakes (8:10 p.m. ET).