The Thursday Takeaway
Fans rooting for maximum entropy in September have suffered blow after blow over the past few weeks, particularly in the National League. The teams currently in first place have won, won, and won some more; those that are now giving chase have suffered setback after setback, leaving them with more ground to gain and less time to do it.

The blows kept raining down on Thursday afternoon—when the Pirates edged the Marlins 5-4—and evening, when the Dodgers downed the Cardinals 5-1.

Jose Fernandez’s first duel with fellow 2011 first-round pick Gerrit Cole resulted in a knockout: Miami’s ace tossed eight innings of dominant, two-run work to best the right-hander who may one day front Pittsburgh’s rotation. Thursday’s rematch was a split decision in which the right-handers both lasted only five innings, though the arrow pointed in Fernandez’s favor, as he allowed only two runs compared to Cole’s four. Unfortunately for Fernandez, Chad Qualls coughed up the lead shortly thereafter, and Pittsburgh’s bullpen held the line until Steve Ames ceded the game in the bottom of the 10th.

Hours later, in St. Louis, Carlos Martinez took the mound fresh up from Triple-A, needing to give Mike Matheny as many innings as possible after Shelby Miller was forced to depart without recording an out on Wednesday. Jake Westbrook, the original scheduled starter for Thursday’s game, was shelled in relief, and Martinez, who labored through 4 2/3 frames in his stead, was forced to bite the bullet. The Dodgers surged ahead 4-1 on a three-run blast by A.J. Ellis in the fifth inning, and that was all she wrote.

Thursday’s results extended a recent trend that stands out most when stretched, arbitrary endpoints be damned, to precisely 19 games. The table below shows the record of each first- and second-place team in the National League over its last 19 contests, the change in the margin separating the current winner from its runner-up, and the margin between the teams at the end of play last night, when the Braves, Diamondbacks, and Nationals were idle.

Add it all up, and the teams that would win their divisions if the season ended today have combined to go 45-12 over their last 57 contests. Those that would finish second have amassed an aggregate 22-35 record over the same span. Two of the divisions, the West and Central, have seen their top two clubs trade places during this stretch, and then watched their new leaders pull away. In the third, the Braves already enjoyed a sizable cushion and have proceeded to dig the Nationals a seemingly bottomless pit.

Our updated playoff odds echo what probably was your first impression upon viewing the above table. The Braves are certain, as in 100 percent certain, to capture the East for the first time since 2005. The Dodgers have a roughly 19-in-20 shot of winning the West for the first time since 2009. And while the Pirates, Cardinals, and Reds are all favored to play into October, the latter two as the senior circuit’s wild cards, Pittsburgh is now nearly twice as likely to win the Central as St. Louis, whose odds are three times better than Cincinnati’s.

Add in the Tigers’ active 12-game winning streak, which includes the just-completed four-game sweep of the second-place Indians, and the probability of nightly nail-biters down the stretch drops further. The new, two-wild-cards-per-league postseason format should keep more teams in contention over the next seven weeks, especially in the junior circuit, where the Indians remain very much alive in spite of their swoon against Detroit. But barring turnarounds from the current runners-up, three or four of the six division races may be decided long before games 162 are played.

Thursday’s Matchup in Review
In yesterday’s WYNTK, Chris Mosch wrote about Max Scherzer’s success in keeping the Indians’ left-handed hitters, among them leadoff man Michael Bourn, at bay. Bourn went 1-for-3 in his three plate appearances versus Scherzer on Thursday, flying out twice and picking up an infield single on a sharp ground-ball comebacker, thereby bringing his career line against the 17-1 right-hander to 4-for-21.

Bourn, who thrives against right-hander’s fastballs but struggles on off-speed pitches, might have fared better on the heaters had he taken Lou Brown’s advice to Willie Mays Hayes: “You should hit the ball on the ground and be legging them out.” The Indians’ center fielder saw six pitches in his first trip to the box (four fastballs and two curves), fulfilling one of his obligations at the top of the order, but he lifted the payoff pitch on the inner third to the opposite field for a harmless fly ball. In the sixth inning, Bourn swung through a low changeup—as he is wont to do—to open his at-bat, and then pulled an outside-third fastball in the air to right.

Mosch pointed out that while Bourn is a ground-ball hitter, Scherzer has the lowest worm-killer rate among Detroit’s starters. The exceptions to that are Scherzer’s curve and change, which generate a good deal of ground-ball contact from enemy lefties. Hence, while Bourn might prefer to hit the hard stuff, Lou Brown might have advised him to look for the soft stuff on Thursday, as he did to collect his single leading off the fourth. Scherzer mishandled the hard bouncer and proceeded to throw it away, but Bourn would have beaten even an accurate throw to the bag, taking advantage of his speed to force the Tigers’ pitcher to scramble.

Bourn finished his evening by taking a called third strike from Al Alburquerque in the bottom of the eighth, as the Indians dropped their fourth straight to the Tigers by a final score of 10-3.

Matchup of the Day
With no curveball in his arsenal and only a middling changeup, Ervin Santana is forced to go after opposite-handed hitters with a fastball-slider tandem that starters with a wider assortment generally reserve for arm-side swingers. Not surprisingly, lefties have assembled a .262/.333/.438 triple-slash line against Santana over the course of his career.

That hasn’t been the case this year, though. In 341 plate appearances in 2013, left-handed hitters have compiled a .234/.287/.335 showing that amounts to a .224 TAv, nearly 100 points worse than their collective .316 effort in 2012. Santana’s newfound success will be challenged this evening by one of the American League’s best lefty sluggers: David Ortiz, a hitter who has done plenty of damage to Santana in their past encounters, but one that the right-hander has also found ways to stifle.

That might seem paradoxical, but it’s true: Ortiz has gone 10-for-31 lifetime against Santana with a couple of doubles, three homers, and four walks—all of which adds up to a .323/.417/.613 triple-slash line—but he has also struck out 13 times in those 36 plate appearances, giving Santana a silver lining on which to hang his hat. 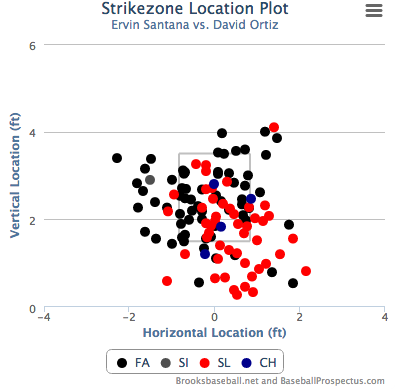 The plan of attack here is easily decipherable: fastballs away, with the occasional inside pitch or ladder-climber, and a whole lot of sliders, mainly on the inner half, with some chase pitches at the back foot mixed in. (If you feel like taking a break for a game of “I Spy,” try to spot the lone sinker in the plot above; we’ll get to its significance in a bit.)

Twenty-five of the 36 plate appearances between Santana and Ortiz are logged on the afore-linked matchup page, and—with apologies to the Red Sox’ designated hitter—the sample, which dates back to 2007, contains only one of his three long balls. That one came on a teed-up changeup, belt-high and dead-center, on August 19, 2010. Hangers like that one are the reason why Santana isn’t keen on using his second off-speed pitch very often. 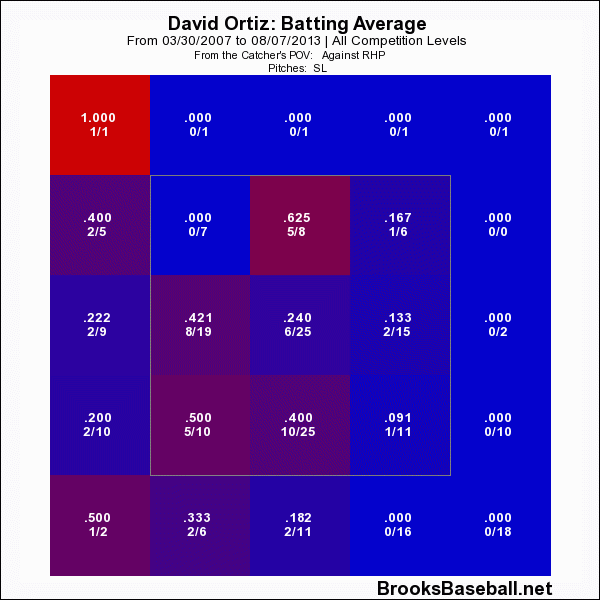 The good news for Santana is that his fastball-slider approach should work well enough against Ortiz, at least based on the plot above, which shows that he is not adept at handling right-handed sliders bearing in on him or darting toward his batter’s box. Ortiz will capitalize on location mistakes, such as this center-cut slider that turned into a single, but he is also prone to go fishing on pitches well off the inside corner. And on May 4, 2010, Santana was able to send him back to the dugout on three straight breaking balls, two of which were out of the zone.

Without the benefit of seeing the details of Santana’s earlier gopher balls to Ortiz, here are the locations that can get pitchers into trouble. The 37-year-old Ortiz is enjoying one of the best offensive seasons of his career, hitting a career-best .332, even though his power is no longer as prodigious as it was in the middle of the last decade. 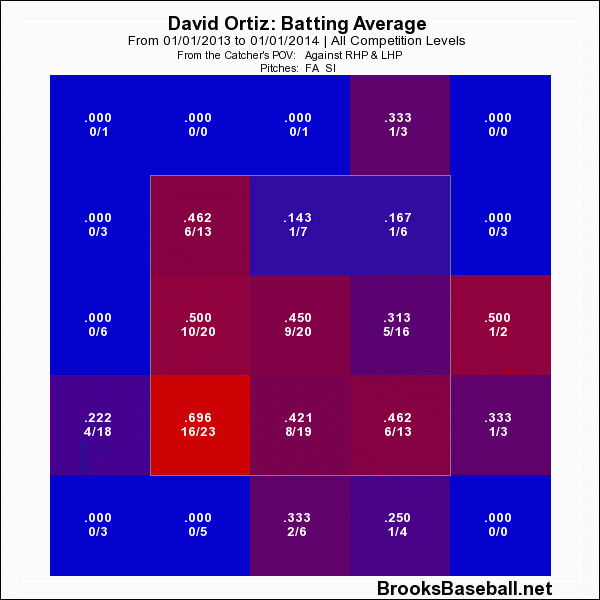 Ortiz remains vulnerable to fastballs high and inside, a cold spot throughout his career, but he is covering the outside corner better than ever, particularly the knee-to-thigh-high area. Most of those 16 hits are singles, but the plate coverage on fastballs is impressive. Santana is better off hoping that Ortiz hits the slider—and that he can’t get his arms extended, as he did on a few occasions earlier this season (8:10 p.m. ET).