The Thursday Takeaway
Were it not for the wholeheartedly rebuilding Astros, whose record is 36-70 but whose future gets a few watts brighter with every trade, no division would have a greater gap between first and last place than the American League Central, where the Tigers are at the top and the White Sox are at the bottom. That gap has grown wider in recent days, as the Tigers, Indians, and Royals have surged, leaving the Twins and White Sox in their dust.

The top three teams in the Central have won a combined 22 consecutive games—the Tigers five, the Indians eight, and the Royals nine. The bottom two have dropped 11 straight—the Twins four and the White Sox seven. Thus the Tigers are now two up on the Indians, who are 4 ½ up on the Royals, who are nine up on the Twins, who are 5 ½ half up on the White Sox. The gap from first to last is 21 games, exceeded only by the 26 ½-game chasm between the Athletics and Astros, but the margin between the contenders (generously counting the Royals, whose odds of reaching the playoffs are south of five percent) is as large as it is in any division, with the possible exception of the National League East, where the Nationals’ freefall has given the Braves a clear path to October.

With the Twins awaiting the fruits of what Jason Parks believes is the league’s top farm system and the White Sox working to stock their pipeline with the pieces that will turn their fortunes around, that gap figures to keep growing between now and the end of the regular season. It could grow significantly if the Indians and Royals sustain their success. And within their active winning streaks, there are reasons to believe that they might.

As the clock ticked down to the non-waiver trade deadline, the Royals snagged outfielder Justin Maxwell from the Astros for pitching prospect Kyle Smith. A powerful hitter whose overall numbers have been dogged by a bloated strikeout rate, Maxwell has a strong track record of performance versus left-handed pitchers; his career triple-slash line against them is .253/.370/.455. The 29-year-old, who is under club control for three-and-a-half more years, will share right field with David Lough, where the two should jell to provide vastly superior production than the Royals received from Jeff Francoeur, who had the position to himself in 2011 and 2012.

The Indians found their right-handed-hitting studs during the offseason and have been reaping the rewards all season long. Detroit sent Ryan Raburn packing after a dreadful 2012 season, during which he batted .171/.226/.254 and was worth 1.9 wins below replacement, but the Indians were intrigued by his pre-2012 production and inked him to a minor-league pact in mid-January. Yan Gomes, a strong minor-league performer who boasted singular positional versatility, came to Cleveland with infielder Mike Aviles in the trade that sent right-hander Esmil Rogers to Toronto. The 26-year-old saw time at catcher and three other corner positions for the Blue Jays in 2012, but has been used almost exclusively as the primary backup to Carlos Santana behind the dish so far this year.

Both were critical to the Indians’ sweep of the White Sox, which the Tribe completed behind Justin Masterson on Thursday. The home team got on the board in the bottom of the second inning, when Santana reached on a one-out single, advanced to second on a knock by Gomes, and scored on a single by Mark Reynolds. Raburn, up with a man on and one away in the third, padded the lead to 3-0 with a two-run blast to the opposite field off Chris Sale. He chipped in a run-scoring single in the fifth, the third of three consecutive one-bag knocks by the Indians, and then countered the White Sox’ lone tally of the day with a solo shot in the seventh.

The multi-homer outing was the third of the season for Raburn, who has now slugged 13 home runs in just 200 trips to the box. His other two came back-to-back on April 29-30, when he tagged the Royals and Phillies for seven hits in eight at-bats. But the 32-year-old Raburn has done his part at the plate throughout the first 108 games, as evidenced by his .961 OPS. That mark, were Raburn to maintain it over a sufficient volume of plate appearances, would rank fourth in the majors, behind only Miguel Cabrera, Chris Davis, and David Ortiz. And with a .901 OPS in 112 plate appearances against right-handed pitchers, including his seventh-inning long ball off of Dylan Axelrod on Thursday, Raburn has been much more than just a short-end platoon player for the Indians so far.

Gomes, meanwhile, has given the Indians considerable production from a spot on the roster that most teams hand to an offensive zero. He teamed up with Raburn to turn a 4-3 deficit in the eighth inning of Tuesday’s game into a 7-4 win. Raburn, who entered the game as a pinch-hitter, turned in a go-ahead, two-run single, which Gomes followed, two batters later, with a lead-padding, two-run double. In that game, Gomes—the first Brazilian-born player to appear in a major-league contest—faced countryman Andre Rienzo in the first all-Brazilian matchup in league history. Rienzo, who held the Tribe to three unearned runs in seven innings on the bump, may hold down a long-term role toward the rear of Chicago’s rotation. Gomes, with a .298/.335/.523 triple-slash line to date, has already made his presence felt in Cleveland.

Thanks in part to Gomes and Raburn, the Indians are now 23-14 in games in which their opponents have thrown a left-handed starter. Only the Rays, at 23-12, have fared better.

In 2012, the Indians did not win their 60th game until September 13th, by which point they had already racked up 84 losses. Now they are 60-48, with near-even playoff odds and a favorable schedule.

If the Indians keep taking care of business against the bottom feeders, they will give the Tigers and their fellow wild card contenders a run for their money through the end of September.

Thursday’s Matchup in Review
Matt Cain, who brought his vintage form to the mound for the second consecutive start and appears closer to turning the corner on his first-half struggles, sustained his recent success against Utley, who dominated their early matchups but hasn’t been able to keep up of late.

The Phillies’ second baseman faced Cain four times during the right-hander’s eight-inning effort, and he managed only a two-out single in the fourth inning. Utley, who batted third in manager Charlie Manuel’s order, popped out in the second inning, flied out in the sixth, and lined out in the eighth. He is now 9-for-30 in 32 career plate appearances versus Cain.

Utley saw two of the nine changeups that Cain threw and one of the seven curveballs; all of the other pitches that Cain used against him were fastballs, and virtually everything he saw was over the outer third or off the outside edge. That jibes with Cain’s past location approach versus Utley, illustrated by the plot on the afore-linked matchup page.

Utley’s single came on a 1-0 fastball, which actually tailed off the outside corner but stayed within the reach of his barrel. Cain has previously backed up the changeup, as he did to earn this strikeout last July, but his inability to find the strike zone with the first pitch in this at-bat forced him to try the hard stuff. Utley, having seen four fastballs in four pitches his first time up, was waiting for it, and he poked a line drive into center field for his only hit of the day.

Matchup of the Day
Jhoulys Chacin has done one thing incredibly well this season, and his accomplishment is doubly impressive because he has notched it while making two-thirds of his starts at Coors Field. The right-hander’s walk rate is down, from 10.2 percent last year to 7.1 percent this year, but his strikeout rate is a mediocre 14.6 percent, up only a couple of ticks from last year’s 14.3 percent clip. Chacin’s best work, though, has come in the gopher-ball department: he has pitched 127 innings and coughed up only four of them all year.

Three of the four home runs slugged against Chacin were authored in the thin air at Coors, where his ERA is 4.38. But in seven starts totaling 42 1/3 innings away from Denver, he has allowed only one big fly and compiled a 1.90 ERA, the second-best road mark in the majors, trailing only Jeff Locke’s 1.83. After an aberrant 2012, during which he amassed a lowly 38.5 percent ground-ball rate over 14 starts, Chacin has restored a more balanced profile this year, inducing worm killers on 46.8 percent of the balls put in play against him. What’s really behind his stinginess with the long ball is a 3.4 percent HR:FB ratio, well below his 9.1 percent career rate.

Is it sustainable? Four hundred innings of poorer work makes the smaller sample this year dubious, but only time will tell. Count Norichika Aoki among those unimpressed: the Brewers right fielder took Chacin deep on April 1—still the only tater that he has served up on the road—and he did it again in Chacin’s most recent outing, on July 28 at Coors. If Chacin is to avoid giving up a homer in back-to-back starts for the first time this year, he will need to reverse a disastrous nine-at-bat history with Pirates first baseman Garrett Jones. 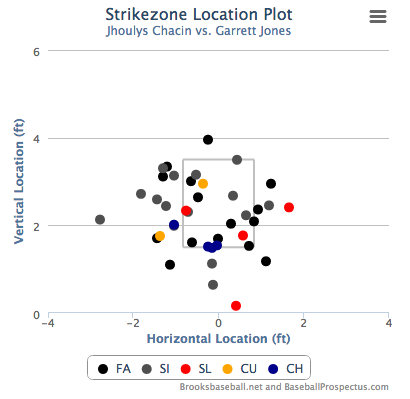 There is little rhyme or reason to Chacin’s approach with Jones in the box—in part because of the tiny sample, and in part because of the right-hander’s penchant for wildness. Whatever he has been trying to do, he either has not executed the plan well or needs a new one, because the results aren’t pretty. Jones is 5-for-9 lifetime against Chacin with a pair of home runs; he has walked twice and never struck out. That adds up to a .556/.636/1.222 triple-slash line, inflated, to be sure, by the brief résumé between them, but worrisome for the pitcher nonetheless.

We know that center-cut changeups, even at the knees, are a poor idea, because Jones clubbed one for a homer when they last locked horns on April 25, 2012. We also know that letter-high sinkers that catch a healthy portion of the inner third are bad news, because Jones clobbered one on April 29, 2011. So, let’s take a look at what might work for Chacin as he tries to stem Jones’ tide and keep his home-run counter at four. 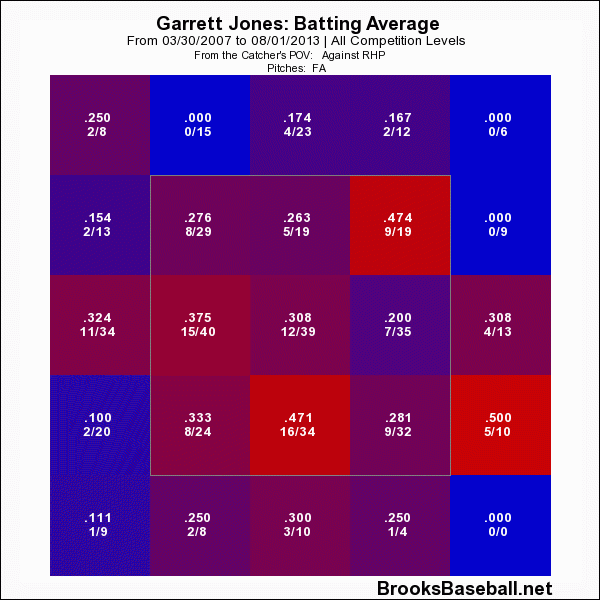 Jones covers most of the zone well when facing right-handed fastballs, but he is prone to chasing both high and outside. He is more dangerous low than high, so Chacin’s plan of attack in April 2011 may have been on the right track, but while Jones can be tied up with pitches under his hands, affording him even a whit of extension can be problematic, as Chacin learned firsthand.

Chacin also uses a slider and changeup to prevent left-handed hitters from sitting dead red, though it’s worth noting that neither offering has been particularly effective this year. Opposite-handed opponents have squared both up often, logging line-drive rates at or above 10.0 percent on each of them, and neither has induced a whiff rate above 10.0 percent. The slider has been better than the changeup, but where should Chacin aim it? 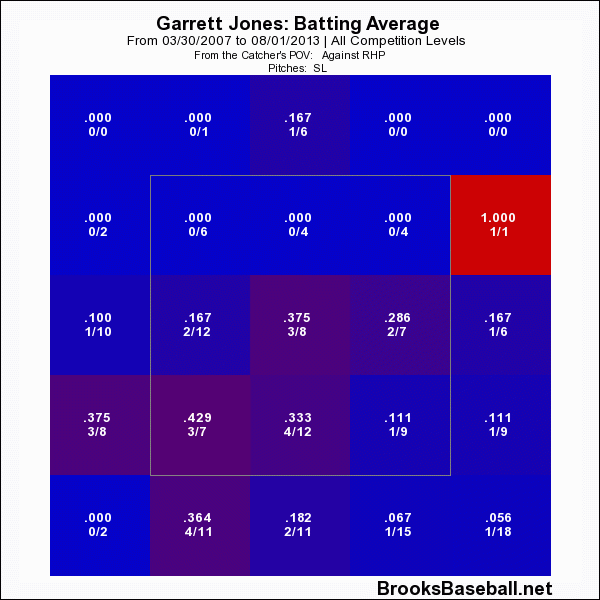 The plot above gives a clear answer: at Jones’ back foot. The 32-year-old can swat slider mistakes, but right-handers who can bury the offering low and inside generally escape his wrath. And judging by his swing-and-miss history, there is no better place to go when Jones is behind the eight ball in a two-strike count (7:05 p.m. ET).