The Wednesday Takeaway
Before the Rays' series against the Red Sox, David Price said, “I want to go nine every fifth day.” Taking the ball in the third game, he did exactly that, disposing of baseball’s best offense with just 97 pitches.

Price completed the first four innings with 35 pitches and needed only 10 to close out the game’s final frame, throwing strikes from the beginning of the contest through the end. All four of his pitches proved effective, with his sinker averaging nearly 95 mph, a mark he’s been hitting consistently since returning from a six-week stint on the disabled list to nurse a triceps injury. Boston’s only run came on a Mike Napoli homer in the seventh.

Price has been striking out hitters at a 20 percent rate this season after hovering around 24 percent the past two years. In July, he’s struck out hitters at an 18 percent rate—a 5.9 K/9. Last night, he struck out just four and induced 12 ground balls.That greatly helped his pitch efficiency, and he has not exceeded 100 pitches since his return, a five-start stretch that includes three complete games. He has averaged 11 pitches per inning over that span.

The Rays’ trademark stellar defense was present once again, converting all but two grounders into outs. With the leadoff runner on in the fourth, the new $110 million man Dustin Pedroia hit a ball up the middle, gloved by a running Yunel Escobar. He barely took another step before shuffling the ball behind his back to Ben Zobrist, who barehanded it for the force out and zoomed it to first for the double play.

Despite his team's month-long tear, Joe Maddon continued to tinker and search for every advantage, moving Evan Longoria into the second spot of his order and streaking rookie Wil Myers into the cleanup position. Myers delivered a two-run single that scored Longoria and Desmond Jennings in the third. Maddon’s lineup spots tend to be an experimental revolving door, as he considered batting Longoria leadoff, too. Nevertheless, his best hitters always bat at or near the top. It was Longoria’s first career start in the two-hole.

The win moved Tampa to within half a game of Boston for the AL East lead. After a Jeremy Hellickson-versus-John Lackey tilt tomorrow, they won’t meet again until September, when they—along with the Orioles—will presumably still be duking it out for the division crown. —Andrew Koo

Wednesday’s Matchup in Review
Austin Jackson found his power stroke against White Sox starter John Danks, hitting his first home run since the Fourth of July as part of a 6-2 victory. The Tigers outfielder capitalized on the favorable matchup to finish the night with two hits, including the second-inning solo shot, to continue his career-long success against the veteran left-hander.

For Danks, it was a battle against untimely mistakes and sour luck. Though he displayed characteristically superb command, Detroit hitters took advantage of hittable pitches over the plate to light Danks up to the tune of 11 hits and six runs over seven innings.

Jackson was among those to hammer Danks, using his patented aggressive approach. He turned Danks’ willingness to throw the ball over the plate against the southpaw, hitting a single on the second pitch he saw in the first inning, then following it up with a first-pitch homer in the following frame. Danks rebounded by forcing him into 0-2 counts, and subsequent outs, in his next two at-bats, but it was a nice showing by Jackson.

However, the most impressive aspect of Wednesday’s game may have been what Jackson managed not to do. By avoiding a strikeout in his five plate appearances, he recorded his first zero-strikeout effort since June 27 against the Angels. That snapped a 22-game strikeout streak, and meanwhile, Jackson continued his success against Danks. He’s now 12-for-30 with three homers against the lefty. —Satchel Price

Matchup of the Day
In 2012, Zack Greinke introduced a cutter to his repertoire at the expense of his slider—which he used just 12.2 percent of the time compared to 19.5 percent in 2011. Greinke had relied upon the slider as his out pitch over the course of his career, as it generated a swing-and-miss 21.3 percent of the time between 2007 and 2012. Greinke has made the full transition from the slider to the cutter since donning Dodger blue, completely eschewing the former since June 1 and making the cutter his second-most-frequently-used pitch behind his four-seam fastball.

It’s unclear whether Greinke dumped the slider due to concern about stress on his elbow or because the pitch simply became ineffective. The slider had the least vertical movement out of any of Greinke’s pitches, and while Greinke’s fastball velocity has steadily dropped since 2010, he’s lost even more velocity on his slider over that time—over 4.5 MPH. The result was a whiff percentage of just 7.7 percent on Greinke’s slider through May, an abysmal mark compared to years past and for a slider in general.

Absent the slider, Greinke has relied on his cutter as his punch-out pitch and has used the pitch much more frequently against right-handed batters. 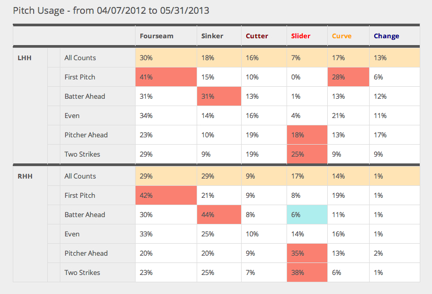 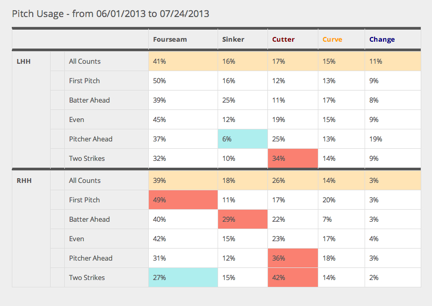 Dropping the slider from his repertoire midseason has come with a newfound confidence in using his cutter versus right-handed batters, as Greinke has enjoyed significantly better success in such situations this year. In 2012, right-handed batters were 11-for-22 against Greinke in at-bats ending with a cutter; righties have gone just 13-for-66 in such at-bats this season. Greinke has also been able to miss more right-handed bats with the cutter, as he boasts a 15.0 percent whiff rate this season compared to an 8.9 percent mark last year.

Greinke has pounded his cutter low and away to right-handed batters and has garnered more horizontal movement on the pitch, which means that it tails away from righties even more sharply than it did last season. Here’s a look at Greinke’s usage of the cutter against right-handers in 2013. 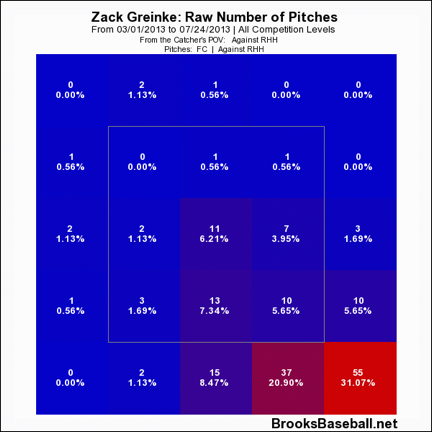 With the usage of Greinke’s cutter in mind, let’s take a look at how Brandon Phillips—who will likely be batting cleanup for the Reds against Greinke on Thursday—has fared against cutters from right-handed pitchers over the course of his career. 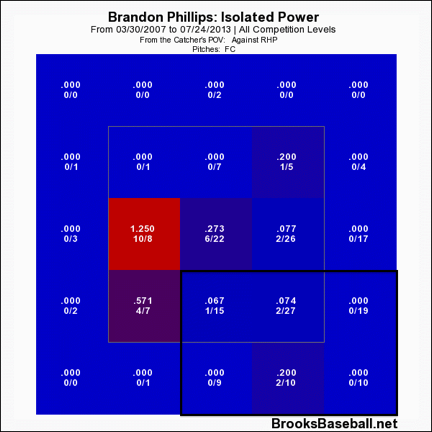 While Phillips will make a right-hander pay for coming inside on him with a cut fastball, he has found little success middle-low and low and away with the pitch. Cincinnati’s second sacker hasn’t exactly been able to lay off such pitches either, as he has swung at pitches in the bordered area 52.9 percent of the time while whiffing 22.2 percent of the time.

Thursday’s matchup will mark the first time the two have squared off since Greinke has added the cut-fastball to his repertoire, but Greinke’s strategy against Phillips has always been to mix up his pitches and attack low and away. 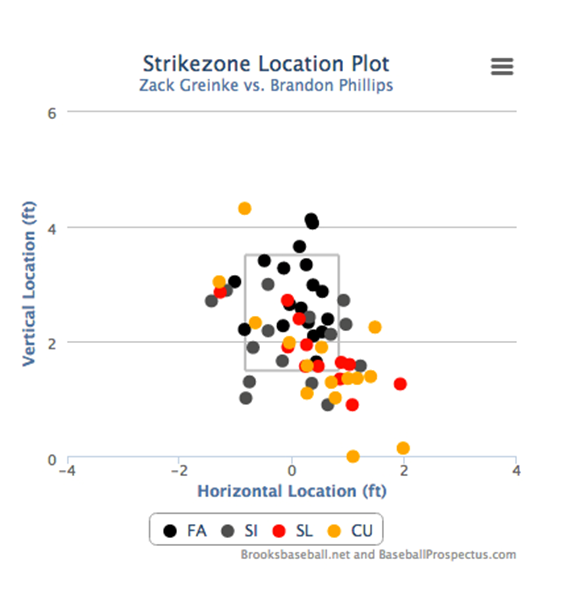 Notice that there’s a lot of yellow on the outer part of the plate, as Phillips has struggled against curveballs low and away over the course of his career, similar to his difficulties with right-handed cutters. Greinke has been quick to exploit this in previous matchups, as he has gone with a first-pitch curveball to Phillips in six of the 14 times they’ve faced off (42.9 percent), compared to just 19.6 percent of the time against other right-handed batters.

Phillips has managed to go only 3-for-14 against Greinke in his career, and two of those hits were actually off sliders—one on May 9 of last year and the other later in the same season, on June 27. Both pitches were left over the inner part of the plate.

Given his tendency to attack Phillips low and off the plate, Greinke should be able to continue getting the better of Cincinnati’s power-hitting second baseman with his newest pitch (10:10 p.m. ET). —Chris Mosch

Meanwhile, on the other end of that contest…

You need to be logged in to comment. Login or Subscribe
newsense
"Detroit hitters took advantage of hittable pitches over the plate to light Danks up to the tune of 11 hits and SEVEN runs over seven innings."

How could that be when the final score was 6-2?
Reply to newsense
bornyank1
Fixed.
Reply to bornyank1