1. Manny Machado Shows Off His Howitzer

You thought Manny Machado was all bat, didn't you? Okay, maybe you didn't. But when you see the clip of Machado throwing out Luis Cruz at first base from beyond the third base coach's box, you really start to realize the level of this player's skills. Machado is already a game-changing hitter, but when you add a 70 grade arm that can erase potential errors like this one on July 7 to his arsenal, you have an impact defender as well, and a true perennial MVP candidate. —Joe Hamrahi

2. Everth Cabrera Fields a Deflection on the Wrong Side of Second
It wasn’t the best play of the first half. I have to stick with the crowd and give that one to Manny Machado. But I love plays like this, where everything has to go so perfectly to create the moment. (This deflection and catch by a pair of Giants was my favorite play of last season.)

If Logan Forsythe handles it cleanly, it’s a routine play. If there isn’t a runner on first at the time, there’s no way Everth Cabrera gets to the wrong side of second to pick up his teammate. He was headed to second to turn a double play and, at the last second, changed course to start a much more unconventional 4-6-3, complete with a spin.—Zachary Levine

3. Mitch Moreland Does the Impossible

There are plenty of cases where a player appears to make a fantastic play, only to find out on replay that he actually trapped the ball, or where his foot wasn't on the bag. Mitch Moreland managed to do the impossible in a game against the Mariners earlier this year. Jesus Sucre, making his maiden voyage in an MLB uniform, bounced a grounder to Moreland at first. With a runner at first, Moreland wisely threw to Elvis Andrus coming across the bag at second for the first out in what looked to be a double play in the making. Meanwhile, Rangers pitcher Justin Grimm was running over to cover first, although Moreland was able to scamper back to the bag as well. Andrus's return throw managed to arrive as both men were in the vicinity of first, and Grimm took the throw, although Moreland's foot was sorta near first base (if you ask me, it wasn't actually on first.) The umpire called Sucre out, meaning that Mitch Moreland (at least for a few minutes, they later changed it to a 3-6-1 GIDP) had managed to record a putout despite neither having the ball, nor touching a base. Now that's magic! —Russell A. Carleton

The most exciting fielding plays are usually driven by maximum, full-extension, all-or-nothing effort. You gasp and exclaim at the length of the dive, the height of the leap. Earlier this month, Aaron Hicks threw out Vernon Wells trying to stretch a double into a three-bagger, and what’s cool about the play is how little energy Hicks seems to be expending in order to make it (I said seems to be, calm down). He appears to misread the carom off the base of the right-center field wall, and the ball rolls past him back toward the infield. Almost nonchalantly, Hicks trots after the ball, casually looking up to see if Wells is trying for the extra base. The whole moment has a bit of a deception feel to it, as though Hicks is intentionally letting the ball get by him so that Wells will be baited into going for it.

Sure enough, Wells rounds second, and then Hicks lets fly with a high-arcing rainbow of a throw that reaches Trevor Plouffe on the fly but is in fact a few feet short of the bag, and slightly offline. Yet Wells is a few feet short of the bag, too. It’s as if Hicks actually knew where Wells would be when the throw arrived—that the throw would beat him to third so easily that it would be more fun to nab Wells before he even got there. Hicks didn’t even need to bother firing a low-laser throw, just a nice, pitcher-long-toss-style, dropped-a-bomb-on-you lob. Allowing Plouffe to reach to his right for the ball and sweep the tag leftward and down onto Wells’s arm is a nice bit of choreographic stylishness: Plouffe! You’re out! Hicks can be seen smirking after the play. The YES Network’s Suzyn Waldman: “This will be on every highlight show in the world.” As for Vernon Wells, he just slaps his hands together. He doesn’t say anything, but surely he’s thinking, “You lit the fuse, I stand accused.” —Adam Sobsey

The plays by Manny Machado (above) and Victor Martinez (below) are spectacular. But it should be noted that if they make those plays cleanly, they aren’t mentioned here. Sheer defensive talent is used to recover from a tiny miscue.

We seem to enjoy these plays much more versus a smart baseball player taking the correct angle to the ball or “knocking it down.” If a player overcorrects, or loses the the ball for a split-second, then make a diving catch, it’s always going to be the more memorable play. Last impressions matter in baseball.

This man does not play baseball. He doesn’t get paid hundreds of thousands of dollars. In fact, he paid baseball to show up. He paid for the jersey. Who knows how much he paid for the glove, or the plywood used to construct it.

The guy clearly lacks baseball talent, like many of us, but made up for it by playing intelligently. We need more fans like this. We need more players like this. Essentially more Victor Martinezes with giant gloves. —Matt Sussman

This one had it all: A shortstop ranging far to his right, a strong jump-throw, a first baseman inhaling it after a bounce, and the runner narrowly missing an infield single. —R.J. Anderson

A couple of nights ago, in the nick of time to make this list, the Braves' right fielder center fielder looked like a natural despite playing in the middle out of the outfield for only the fifth time in his big-league career. With runners at first and second and two away, Justin Turner lined what seemed certain to be a game-tying single to left-center, only to have Heyward range far to his right and make a full-extension dive to snag the ball just before it hit the ground. In the process, he secured a 2-1 victory for the Braves and spared Craig Kimbrel his fourth blown save of the year. Heyward is still batting only .226/.325/.366, but that effort in the field ought to earn him at least a short reprieve. —Daniel Rathman

8. Carlos Gomez Saves the Day, Too

On July 8 at Miller Park, Joey Votto stepped up to bat against Francisco Rodriguez, his Reds down 5-4. With two outs and a runner on first, Rodriguez pitched himself into a 2-2 count. Then the following sequence, displayed in this haphazardly constructed win expectancy graph, happens in a span of eight seconds:* 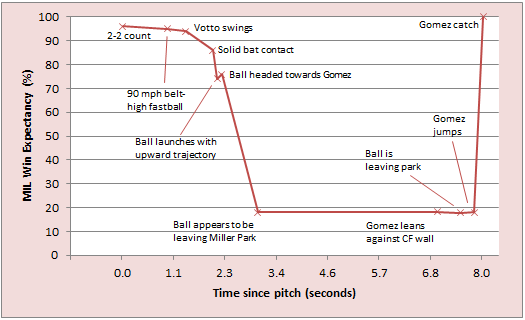 The entire game came down to those eight seconds, when the ball was as good as out. The Brewers’ went from a near certain win to facing a one-run deficit, before Gomez stole back all the win expectancy points. That fly ball – which Rodriguez didn’t even look at,thinking it was gone – was a do-or-die moment, and luckily for the Brewers, they couldn’t have had a better fielder out there for the job. —Andrew Koo

9. Andrelton Simmons' Over-the-Shoulder Dive
This list needed some Simmons. Picking only one play by the Braves' gifted shortstop is painful, but this one, a sprinting, facing-the-wrong-way, full-extension catch of a Russell Martin pop-up in foul territory on April 21, might be the best of the bunch.

About nine seconds into that video, just before the catch, you'll hear this piercing, high-pitched shriek:

That was me, watching at home in Manhattan and screaming so loudly that the sound was picked up at PNC Park. And now you know why Simmons' defense rates fifth overall in FRAA and first overall in my heart. —Ben Lindbergh

10. Victor Martinez's No-Look Flip
There were hundreds of amazing options for this particular Lineup Card, and that’s just from Manny Machado’s catalog. With my choice, I went for degree of difficulty of the play overall as well as degree of difficulty for the player in question; thus, I only needed to thumb through the David Ortiz, Billy Butler, and Victor Martinez catalogs to land on my choice. As it turned out, Ortiz and Butler didn’t even have a catalog of defensive plays, which led me to Martinez’s sick no-look flip to a covering Drew Smyly for the out at first.

Martinez has played first base only seven times this year, usually to give Prince Fielder a “half”-day off as the two just switch positions. That heightens the degree of difficulty, because of how scant his opportunities have been this year. He has just 62 innings at first base and, in the 33rd of those innings, he made his best defensive play of the year to get the speedy Jacoby Ellsbury. Any time Martinez can look like a middle infielder is a time to take notice, and that's why I agree with MLB Network that this was the play of the first “half.” —Paul Sporer

You need to be logged in to comment. Login or Subscribe
ethanwitte
No love for Ben Revere's catch in Cincinnati? I guess that would be #11
Reply to ethanwitte
DanBrim
I think the Puig throw to end the game on his debut should be on here somewhere. Still a fun list, though.
Reply to DanBrim
Grasul
You guys forgot about the HR Bourjos robbed and check out the DP Yunel turned tonight.
Reply to Grasul
anderson721
Yeah, the DP should shoot to the top of list. Poetry in motion.
Reply to anderson721
zmooney
Mariner fan catches ball in his beer: