On May 30, following eight consecutive losses—only one in which they scored more than three runs—the Royals reassigned their hitting-coach tandem of Jack Maloof and Andre David to the minors, and in their places installed George Brett and Pedro Grifol. The switch happened shortly after Maloof became embroiled in a mini-controversy concerning Kansas City's putrid power production.

As far as players turned hitting coaches go, it's hard to find a larger contrast in career achievements than Brett and Grifol. Brett, a legend in Kansas City, led the American League in OPS three times over his 21 seasons in the majors Conversely, Grifol never reached the majors, and finished with a career minor-league OPS of .599. However uneven Brett's and Grifol's playing careers may have been, they joined the Royals with the same endgame in mind: fix the offense and, by extension, put Eric Hosmer and Mike Moustakas back on the right path.

Six weeks later, it's unclear if Brett and Grifol have accomplished their goals. Evaluating coaches, even through a results-based prism, remains a next-to-impossible task.

Brett and Grifol have succeeded in their efforts by the most rudimentary of measures. The Royals have averaged 4.19 runs per game under Brett and Grifol after scoring 3.98 per game under Maloof and David. Individually, both Hosmer and Moustakas have improved. Hosmer, who had nine extra-base hits under the old hitting coach duo, has eight home runs since Brett and Grifol were appointed. Moustakas, on the other hand, went from being one of the league's biggest disappointments to batting .299/.341/.455 over the past four weeks. As a team the Royals ranked 25th in OPS during the Maloof-David era, and 19th during the Brett-Grifol era.

But this is a small sample, and weird things can happen. For proof look no farther than the first two months of Kansas City's season. The Royals scored 4.33 runs per game in April, then 3.65 in May. Until the end of May the hitting coaches remained the same, as did the personnel. Perhaps the instruction changed, or worsened. The funny thing is, despite the preceding paragraph, the Royals have seen most of their hitters decline since switching hitting coaches. In fact, Hosmer and Moustakas are the only Royals hitters with 100-plus plate appearances since the change to improve on their OPS:

Again: This is a small sample, and some of these performances would likely have occurred regardless of who the hitting coaches were. (David Lough, bless his previously anonymous heart, was never going to have an OPS over .900 all season long.) Presumably Gordon will be fine, along with Cain. The real question then is whether Hosmer and Moustakas can continue to hit well under their new supervision, which, according to Brett, included getting rid of their bottles and other baby stuff.

It appears that Hosmer and Moustakas have spent plenty of time in the batting cages, as both have made adjustments to their mechanics. Hosmer's change is subtle. He moved his hands up, from face level to helmet level: 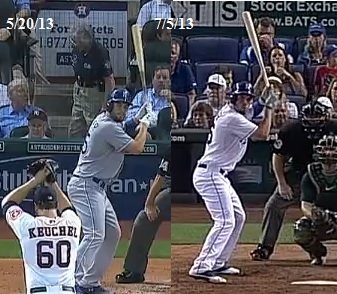 Moustakas elevated his hand slot, too. He took it a few steps further, as well, by opening his stance up and adjusting his posture along the way:

In both cases these changes seem minute. But anytime a batter changes his hand slot it could have more impact than anticipated—hands are, after all, the most important aspect of hitting. Consider Brett's recent anecdote about Moustakas. When Brett first took over Moustakas couldn't homer, even in batting practice. Now he's launching double-digit amounts of souvenirs. Why? To hear Moustakas explain it would be to believe the improvements stem from liberated hands. Hands are vital to success.

Talk may be cheap but Hosmer and Moustakas' recent numbers and comments speak to progress, and improvement always feels realer when there's something tangible to which to ascribe it. Even if the attribution or improvement proves false, the mere tweak demonstrates a work of change. That is seductive. Hence the next challenge for Brett and Grifol. When Hosmer and Moustakas hit a slump will they think back to these times, where a little tinkering led them from the dark to the light, and attempt to replicate that process?

Hitting coaches have to fill various roles, ranging from technician to psychologist. Brett and Grifol have done well enough to get their two pet projects back to good. Now they have to work on the rest of the lineup while maintaining those gains.

You need to be logged in to comment. Login or Subscribe
wendtm
Re Hosmer, as a recent BP article showed, the obvious problem was his being late to balls and compensating with a ridiculously convoluted leg lift and bat dipsy-do. Has that changed? That seems kinda more important.
Reply to wendtm
zwestwood
seconded....

news on his BJ Uptonesque do se do timing?
Reply to zwestwood
abwinkel
Some interesting info about Hosmer on the Royals Review blog: http://www.royalsreview.com/2013/6/25/4458180/royals-new-improved-hosmer
Reply to abwinkel
hotstatrat
Thumbs up.
Reply to hotstatrat
MKaraff
I'd like to see some more Greg Holland coverage. He's looking awfully nasty and I hope that he continues to be as otherworldy with his k/9.
Reply to MKaraff