Hey look sharp, it's the second stage of Every Manager's Face. Here was the first part. And here is the second part:

Act 2: (Bonus Round)
Host: Name a famous person with the last name Melvin.
Dad: Doug
Host: Doug is the number one answer.

From a certain angle, will never be mistaken for: Bob Melvin

Act 2: He shows us his gum. It's a slow strip tease, a little give, a little take, a little shy, a little exploratory. The gum is not as pure as it would like you to think it is, but you'll embrace the shared deception. "Oh my I didn't realize anybody was out here!" the gum says, with faux embarrassment. "Well you've seen mine, so you might as well show me yours…"

From a certain angle, will never be mistaken for: A.C. Slater's sister, J.B. Slater.

Act 1: He shows us his gum. It's obscenity, plain and simple, intended not to seduce but to assault. It's the pop-up spam that seers its grotesque image into your monitor; the subway flasher, with an artificially realistic appendage; the lewd video that shows up unexpectedly in the middle of Sesame Street because of some sick hack. At its core, it hates you and loves only itself.

From a certain angle, will never be mistaken for: Potter Stewart

A brief interlude from the framing device and voice of this series to talk about gum. A lot of these Manager Faces feature gum. Should we be stopping to wonder why there is so much gum in baseball? There's no reason not to chew gum all day during your job, but on the other hand there is no reason to chew gum all day during your job, and I'll wager that nearly all of you have jobs and nearly none of you chew gum all day during them. Is it because they're outside? That doesn't seem to matter, and being outside actually puts them farther away from trash cans than your desk likely puts you. Is it because their jobs are boring? Your job is infinitely more boring! Look at you shirking your job right this very moment! Is it because they need to feel like children in order to really be in the spirit of this child's game? Maybe, I guess, but that's weirdish. Is it because it's there, free? Sure, but a) why is it there, free, in the first place and b) it's gum; it costs a nickel; the cost of gum is rarely the primary discouragement. The only convincing reason I can think of is that gum is the alternative for chewing tobacco, and these guys need it because they're so used to chewing tobacco. This is the only convincing reason. It's moderately convincing, but raises the question of why there is chewing tobacco (for all the same reasons as the gum issue above). And, anyway, loads of people in your office used to smoke but have quit and don't need to have buckets of red vines provided to them to ease their lingering oral fixations. It's weird, is all. It's not the biggest difference between your job and their jobs, but it's not the smallest, either; imagine going into every business meeting with a piece of gum hanging out of your mouth. Chewing gum while conducting every sales call. Etc. So many cavities.

Mike Matheny Face, Or: I Always Get Stuck In A Seat With An Obstructed View, Just My Luck

Act 1
—Hey Mike, what are you looking at over there?
Oh I’m not looking at anything. I’m practicing my nodding. Just never been able to get the hang of nodding. How does this look, as a nod?

Act 2
—Hey Mike, what are you nodding about now?
Oh I’m not nodding. I’m practicing swallowing. I can never make things go down my throat. Just tip your head back like this?

From a certain angle, will never be mistaken for: Falcon Heene

Act 1: If you stare closely enough into the eyes, you see all the way into the soul—or, at least, you get a slightly creepy insight into how the man watches a game. In a nine-and-a-half-second clip, Buck Showalter looks 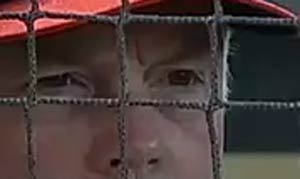 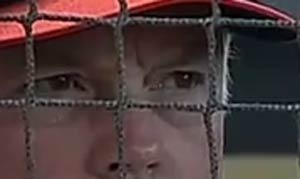 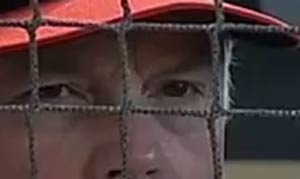 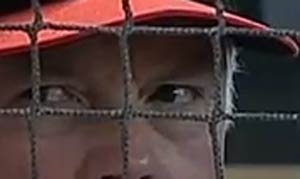 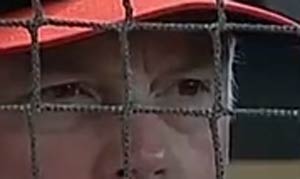 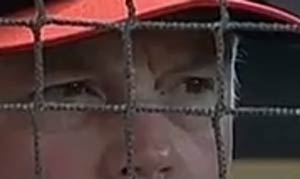 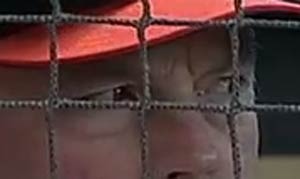 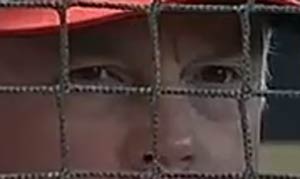 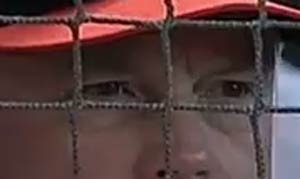 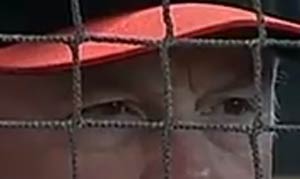 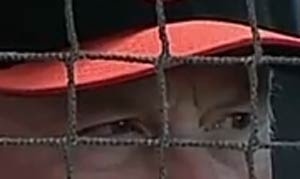 at 11 different things. What are those 11 things? Here's a complete guess, based on his eyes (note that Showalter is in the third-base dugout):

If you learn anything in this series, it's that Buck Showalter is a details manager. Now go back and watch Clint Hurdle. Clint Hurdle is more of a waiting-until-his-pension-kicks-in manager.

Act 2: It's nine. There are nine blinks.

Act 1
Ned Yost stares into the distance and remembers a time before. Back then, he couldn’t manage anything right. He’d go out to call for the lefty and he’d motion with his right hand; aw crud, now he was stuck with Josh Rupe. “Hit a homer,” he’d try to tell his third baseman, but it’d come out of his mouth all jarbly, and the third baseman would go to the plate trying to figure out what “have a MOMA” meant. He once spent 40 minutes showing his catchers how to pop up and throw down to second more quickly, with the throwing arm cocked back and the front leg set sturdy, and then realized he was actually talking to a water cooler and two seagulls. Things just weren’t going well for old Ned, no siree, they sure weren’t. His lineup cards were always smudged; his walk to the mound was always a little off-line; his post-game handshake was too fingery; his press conferences eventually veered into Spanglish; he called for sacrifice bunts with two outs, and for hit and runs with nobody on, and for double switches in an American League park, and for pitchouts on 3-1 counts. If he had 75 cents for every time he mistakenly went out and tried to coach first base…

Act 2
…until the day the mysterious man in a Phiten polo shirt approached him in the tunnel between the dugout and the clubhouse in Detroit. It was eerily quiet. The two men were, somehow, all alone in the tunnel—“somehow” being that it was the fourth inning, and Yost (having forgotten it was a day game) was hours late; also, it was the wrong tunnel; the Royals’ series in Detroit had ended the previous day, and Yost should have been in Tampa Bay with the rest of his team—and the enigmatic man in the Phiten polo shirt told him he had something that would make Ned Yost the best manager alive. Ned Yost looked down at the dumb hunk of plastic. “I thought these were for athletes, not managers,” he told the sinister man in the Phiten polo shirt. “Oh, no, no, no,” the creepy man in the Phiten polo shirt told him. “It will work 100 percent as much for you as it does for any of your players,” he reassured Ned Yost, then chuckled to himself at how cleverly he had managed to avoid lying in that sentence.

From a certain angle, will never be mistaken for: The image of the Virgin Mary on a tortilla

Bud Black Face, Or: A Not Very Convincing Sequel To The Movie Crank

Act 1: But truly what is the role of the manager? To fill out a lineup card, to choose a baseball player for the baseball thing? Nay, 'tis one role and one role only: To find the appropriate place to stand, to stand there, and upon standing there to reassure the baseballers that they are not alone. To declare, by one’s posture and presence, that should there be failure it will be not the players who will ultimately own the failure but the manager, the only man in the dugout with the authority to forgive 25 men of their sins and bear the weight of the blame on his own record. If you want to figure out the best way to assess manager performance, first figure out how to assess the way a man stands.

From a certain angle, will never be mistaken for: This big dude with glasses sitting a few feet away from me right now.

As always, big huge debt of gratitude to Kris Liakos for first noticing that managers, like all of us, have faces.

You need to be logged in to comment. Login or Subscribe
whatzitmather
It could be a display of spontaneous, heartwarming jubilation. Or perhaps it is a grisly scene of on-field carnage and mayhem that would make Bane envious.

Either way, the Eyes of Showalter will view it the same...
Reply to whatzitmather
gjhardy
I think Hurdle is chewing to make the visor of his cap flap up and down. He's using every muscle in his head to chew that gum.
Reply to gjhardy
asstarr1
Maybe Melvin has low-grade narcolepsy and is just nodding off.

Hurdle, realizing he's on camera is thinking of punching the cameraman in his soul.

Buck had his eyes replaced with telephoto lenses and his eyelids now act as the shutter.

Ned is thinking to himself "our team isn't too bad, how can I fix that?" up to the top step, shouts "send in Getz!"

Someone ate Bud's favortie donut in the clubhouse and he's looking for the bastard right now, that brief nod at the end is the acknowledgement that someone will die after the game.
Reply to asstarr1
Auggie6
There is actually some research that shows chewing gum can decrease anxiety and improve concentration and performance, some high schools are now recommending and allowing their students to chew gum during the act and other standardized tests.
Reply to Auggie6
hotstatrat
[applause]
Reply to hotstatrat