Last week, Cubs General Manager Jed Hoyer appeared on Buster Olney's podcast. The pair discussed a variety of Cubs-related topics, spending a chunk of time on the organization's new emphasis on plate discipline. Historically the Cubs have operated without great concern for discipline or walks, Hoyer explained, and as a result some of the inherited players are struggling to adjust to the new definition of a quality at-bat, which puts their jobs at risk. Olney smartly followed up with a question about Starlin Castro—an inherited player with a substandard walk rate—to which Hoyer replied with a vote of confidence by saying, "He does need to improve his plate discipline over time. I think he will." Hoyer added, "He'll figure out the on-base thing."

Whether Castro, or any player, can figure out the on-base thing is an endless debate without an apparent answer. In Castro's case there's cause for skepticism. This is his fourth season in the majors, after all, and he's still in search of his first season in which he walks in more than 6 percent of his plate appearances. In fact, his career-high walk rate came in his rookie season, as a 20-year-old. Thus far this year Castro is walking and striking out at what would be career-worst rates, although that isn't too surprising considering many of his rate stats are in the same boat. So there's absolutely reason to think Castro is not figuring out the on-base thing anytime soon.

But then maybe there is. Hoyer kept things vanilla in defending Castro, citing the shortstop's age and hands, as well as hitting coach James Rowson—whom the Cubs hired away from the Yankees after the 2011 season. (Let the record show Rowson talks the good talk, be it about attacking the strike zone or Castro in particular.) So much of quantifying plate discipline is choosing the parameters. Those walk rates cited above paint an ugly picture of Castro's education at the plate. Pick another set of numbers and the answer varies. For instance: He's seeing more pitches per plate appearances, and working himself into more hitter's counts than before. This season he's worked 25 3-1 counts and 12 3-0 counts; last season he saw 38 and 26 all season long.

The PITCHf/x-generated plate discipline stats tell of Castro swinging at a career-low 21 percent of the first pitches he's seen this season. He's also expanding his zone less often, and swinging less in general relative to the two seasons beforehand. Of course these are almost imperceptible differences tied to one or two swings per 100 taken. Those experiencing Castro day in and day out wouldn't notice.

Yet those watching Castro daily would notice how he is not the stereotypical hacker who swings at anything and everything, from his eyebrows to his toenails, from his hip to his shadow's lip. Catch Castro during the right segment of the at-bat and he'll appear to be a disciplined hitter, perhaps one bordering on passivity. Catch him during the wrong segment and he'll look like the world's worst hacker. There is a pattern to these behavioral shifts, one made apparent by Ryan Lind's data crunching. Lind's product shows Castro's aggressiveness increases with the strike count. No surprise there. What does surprise is the degree of its increases, which can be compared to the league's other hitters using an OPS+-like metric that, for these purposes, is called SWING+:

This season Castro is less likely to swing on no-strike counts than the league-average, slightly more likely to swing on one-strike counts, and a lot more likely to take the bat off his shoulder with a two-strike count. Just as he was last season. So if Castro has progressed in his plate discipline it's not showing through this prism. Still, Castro's case becomes more intriguing with further context. When questioned, Sam Miller named Brandon Belt as a hitter with a "very disciplined" approach. Belt's infield partner, Pablo Sandoval, is a world-renowned bad-ball hitter with swing-happy tendencies. Thus creating the perfect spectrum of plate discipline:

Compare these numbers to Castro and he comes out as a more passive/disciplined hitter in the first two stages than the hand-picked disciplined hitter, yet somehow more aggressive in two-strike counts than the hand-picked wild thing. Before delving into why that could be, consider one other piece of context: Castro's numbers compared to the other players with the league's 10 lowest walk rates through 250-plus plate appearances. Once again Castro comes out looking passive/disciplined in the early going, then overly aggressive late:

There are at least three theories as to why Castro chooses to shift gears, the first being he cannot recognize the off-speed pitches that come out to finish at-bats. A cursory glance at his tendencies earlier in the count suggest this is probably not the case. Another theory is that he hates to strike out. Plausible, as no player enjoys going down on strikes. The final explanation feels like the most likely: He lets his innate ability get the best of him.

Castro is a tremendous natural hitter with a preternatural ability to put the bat on the ball. Unfortunately, possessing that kind of skill can work against a player by coercing him to expand his zone and offer at poor pitches. He's not swinging over that slider or changeup falling beneath the zone; he's hitting them into the ground. Sometimes his efforts result in hits, more often they result in outs. Below is a great example of how Castro might hurt himself. The pitch is a 3-2 changeup that might've been called ball four anyway—especially since the catcher dropped his knee during the delivery—but Castro swings and gets the barrel on the pitch, and winds up reaching on a single. 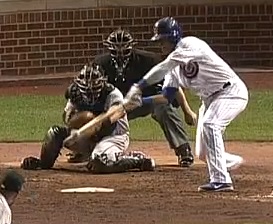 While that swing is part of Castro's problem, it's also part of the tough task ahead for Rowson and the Cubs. They do need to work with him to improve his walk rate and pitch selection. At the same time, stripping him of the ability to expand the zone late in counts could work against them, as part of Castro's specialness is being able to turn a b-hack on a pitch tailing out of the zone into a hit. The key is to work with him to tighten his zone outside of the zone. If Castro can do that—and keep in mind he shows the aptitude to do so earlier in counts—then he'd make Hoyer's confidence appear well-placed, and if he does figure out the on-base thing then the Cubs will have one of the game's most gifted and well-rounded hitters.

Special thanks to Ryan Lind for research assistance.

You need to be logged in to comment. Login or Subscribe
pobothecat
Interesting breakdown. I'd been wondering what was happening here. Nice work. Sounds kind of Ackley-ish.

Also interesting to see breakouts Machado, Segura and Marte on the Top Ten Fewest Walks List.
Reply to pobothecat
mattidell
Nice work
Reply to mattidell
berkoffm
Tremendous analysis. Wow.
Reply to berkoffm
deltarich
Very informative read. It's been ROUGH holding onto Castro in my dynasty league with how he's performing, but you gotta think that he'll eventually get things down and figure things out. I like that they are letting him work this out in the majors, but he's still got work to do.
Reply to deltarich