In the comments section of a post at Tom Tango's site about Max Marchi's "Retroframing" article, commenter "pm" asked:

I took a quick look at this with Ryan Lind. Here's a scatterplot of the 79 catchers with at least 1000 borderline pitches, defining "borderline" as 0-2 inches off the edge of the strike zone (in any direction). Batter swing rate is on the x-axis, and catcher ratio between pitches outside the zone called strikes and pitches inside the zone called balls is on the y-axis. 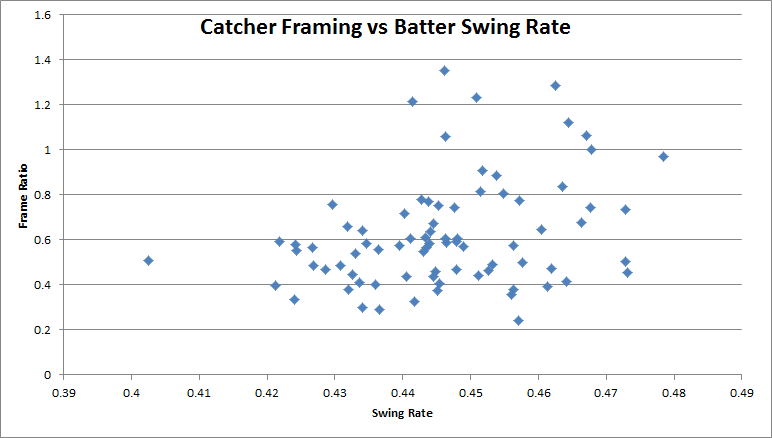 The correlation between the two is 0.31. The five at the top right who have high ratios and swing rates are Erik Kratz, Chris Stewart, Carlos Corporan, Ryan Hanigan, and Brian McCann. If you remove those five, the correlation is still 0.20. The outlier on the left is Bengie Molina, who wasn't quite the framer his brothers are (but was still pretty good, from what we can tell).

It's not conclusive, but it does seem like there might be some slight tendency for batters to swing more often at borderline pitches with a good receiver behind the plate.

2013 League Leaders (Out-of-zone strikes and in-zone balls, not adjusted for other factors)

As you probably know from previous articles, Max Marchi has a framing model that adjusts for many factors Ryan's and my simple OZoneStrikes/ZoneBalls method doesn't: count, umpire, pitch type, batter, etc. The problem (for my purposes) is that Max's code is set up to run on a monthly basis, and it takes a lot of processing time, so I can't use it for This Week in Framing, at least right now. However, we did a quick check to see how closely the two methods agree.

The correlation between the two methods for 2013, through the end of May, was 0.44, which is actually fairly strong given the sample size. The larger the sample size, the stronger the correlation. If we compare catchers with at least 1000 called pitches this season, the correlation rises to 0.48; at a minimum of 2000 pitches, it's 0.52. (The correlation between Max's method and Mike Fast's method, when Mike checked in 2011, was 0.86, but that was with a sample of 80 catcher-seasons.) Of the top 10 framers by Max's method, five were also in the top 10 by Ryan's and my method (Jose Molina, David Ross, Erik Kratz, Yadier Molina, and Francisco Cervelli), and of the bottom 10 framers by Max's method, five were also in the bottom 10 by ours (Chris Iannetta, Kurt Suzuki, Matt Wieters, Ryan Doumit, and John Buck).

So while we're using an extremely stripped-down methodology for this series, I'm confident that it's doing a decent job of distinguishing between successful and less successful receivers.

A lackluster week for Molina, but with a few highlights, as usual. All three of his best frames come from the June 4th game against the Tigers, when umpire Chris Conroy was willing to give him the high strike.

Fielder had words with Conroy after this one.

Garcia was no happier to see this pitch called a strike.

The highest of all.

It's not as if Conroy was calling all pitches in this location strikes. Those two were the only ones Moore and Molina got:

And Anibal Sanchez, who was starting for Detroit, didn't get any called strikes above the zone:

Of course, he didn't have Molina.

Lucroy's best week yet. Two of his three best frames were also two of the week's three best by any catcher.

Lucroy delivers a strike that looks a lot like the ones we see in this section week after week, and Crisp checks his ball-four bat toss.

The angle makes it hard to tell how low this was: 15.8 inches above the ground, according to PITCHf/x. The irony of Doumit being the batter is rich.

Best Frames of the Week

The second-best Lucroy frame above.

Especially nice because Gomes was expecting something on the outside corner and had to adjust down and in to catch Kazmir's change. Frazier wasn't amused.

Gimenez appears on the "worst of the week" list below, but his work wasn't all bad.

Kratz's wide stance lets him get low and come up from under this ball, freezing Turner.

The best Lucroy frame above.

Worst Frames of the Week

Gimenez knelt for a moment before throwing the ball back to give Emmel a chance to change his mind.

Hughes has thrown only 25.6 percent of his pitches inside the strike zone this season, almost 10 percentage points less often than the next-most-zone-averse pitcher (min. 100 pitches thrown). Maybe Knight was so surprised to see a strike he didn't know what to do. Martin made a decent attempt at framing the pitch, but its movement forced him to reach too far.

Pena seemed to be preparing to thrown this one around the horn before the ball even got to his glove. He then had to perform the catcher's equivalent of the batter's checked ball-four bat toss. Sanchez did a double-take when he realized this wasn't an at-bat-ending strike.

Gimenez again, but this time coming up to throw probably cost him the strike. He didn't get the runner, either.

Belisario missed his spot, and he throws hard, so Federowicz didn't have a ton of time to adjust. Still sort of on the stabby side.

Compare that to Lucroy's technique on low pitches. So much more movement.

You need to be logged in to comment. Login or Subscribe
fawcettb
Hey! Can we stop ragging on poor Ryan Doumit! He has feelings...
Reply to fawcettb
KerryHofmeister
Still a weekly favorite.
Reply to KerryHofmeister
Schere
I would guess that the reason there's a correlation is simpler - that batters are more likely to chase when they're behind in the count, and they're more likely to be behind in the count when good framers are catching.
Reply to Schere
Psychedelic
that makes a lot of sense lol
Reply to Psychedelic