When nerds (your humble narrator included!) argue about bunting, they often rely on a metaphor that's barely a metaphor but is really a way of comparing baseball to other sports. In basketball and football and hockey and rugby and lacrosse and sometimes ultimate frisbee, there is a clock, an explicit timekeeping device used to mark the end of the match (or segment of the match) and how near it draws. If the score on the pitch is 13 to 2 and the hard time cap of 40 minutes is just 90 seconds away, well, it's physically impossible to score that many points in that little time, even for Reggie Miller. Baseball, by contrast, has no clock, only outs. If you have fewer runs than the other team once you use up your 27 outs, you lose. Outs are thus analogized to time, with the idea being that intentionally taking precious units off the clock is not a winning gambit.

The metaphor alludes to the infinitude of baseball, the idea that there's nothing in the rules preventing a game from happening to the end of time in a different way than in timed sports. In basketball, a game could have infinite overtimes, but there's something about the clock starting over every five minutes that feels distinct from the infinite baseball game—I think it's the visual image of an endlessly tied basketball game, where the clock loops back to five minutes again at the completion of each overtime, that makes it feel finite, just a circle that we can hold in our hands and our minds, not a line (score) extending out past our contemplation the way a baseball game does.

Sacrifice bunts are frequently attributed by nerds to managers feeling insecure about letting well enough alone. If they're going to lose, they're going to lose while doing something, dammit. Beyond this, though, maybe there's something deep in a manager's mind that prevents him from accepting the concept of the infinite baseball game, the idea of a team never running out of its outs, that makes him seize the moment and prove his dominion over the Never/Always by forcing an out to happen. It's not so much base CYA to ensure the continuation of a paycheck as a declaration to the universe of the manager's own existence and importance. In the face of dark, difficult questions about the nature of life and the concept of free will, surely a man's occasional lashing out in this way can be forgiven. (This line of reasoning might mean that Joe Maddon is the truest freethinker of them all not because of his belief in sabermetric orthodoxy but because he can accept the possibility of the unfathomable. Then again, even Maddon calls for bunts sometimes. We're all human. I think.)

I also have a theory about why bunts upset the rational baseball fan so much: when you equate outs to time a manager giving away outs is the same as giving away time, and time is the only resource we truly have. Baseball may be structurally infinite, but we are not. Bunts then represent a waste of life itself, and who can stay calm in the face of such ill-considered action?

Be careful, then. Judge not the manager who calls the bunt, for he may be grappling with issues beyond issues, and judge not the sabermetric nerd overreacting to that bunt, for he is merely feeling his own mortality.

The real problem with the outs/clock metaphor, though, is that basketball and football teams do routinely give up clock. When a football team is ahead late in the game, it avoids throwing passes because incomplete passes stop the time running. When a basketball team is in the same position, it delays shooting the ball until the 24-second shot limit has nearly run out. Each tactic is premised on the fact that the teams share a clock. In baseball, though, each squad has its own hourglass of outs, thus giving it a structure more akin to chess than football.

In important ways, however, baseball is not chess. Chess matches, at least chess matches between players older than six years old, are not commonly known to end via the wiping out of the other player's pieces—they are won by trapping the opponent's king. This can theoretically occur at any point in the game, with anywhere from zero to all of the loser's pieces removed from the board.

Baseball, by contrast, is not in the end about trapping the other team or boxing them in or outmaneuvering them. Don't listen to George Carlin and buy into baseball's pastoral, safe-at-home, quiet and soft image. The metaphor is this: In baseball each team has 27 warriors and can win only by taking control of more homes than the other team does while annihilating all 27 of that other team's soldiers.

Viewed this way, the bunt can regain its mantle of nobility: the general orders one man into the breach, one man to rush the fortified gun pit, one plane to dive at the enemy ship, so that the rest of the squadron will be victorious. The sacrifice is true and total.

(The reason we were investigating this question at all behind the scenes here at BP is because someone reportedly said something silly on the television. It's so silly as to be unworthy of further comment, but I did want to mention this because otherwise the parameters and even the discussion itself might appear a little strange. Just know that it was not unprompted.)

Anyway, as a lesson that bunts are not a death sentence (regardless of whether they're a good percentage play, something that's a lot more nuanced and perhaps a closer call than many of us would like to admit in a lot of situations), here is a recounting of four situations that Ryan Lind and Rob McQuown graciously worked to find for me and the lessons we should take from each.

Sunday, May 19th, Turner Field, Los Angeles in town, bottom of the eighth, Kenley Jansen on the hill, Dodgers up 2–1. Freddie Freeman and Brian McCann each reach base. Don Mattingly calls for Brandon League. Up comes Andrelton Simmons, who lays a nice sacrifice down the third base line. Here's Juan Uribe: 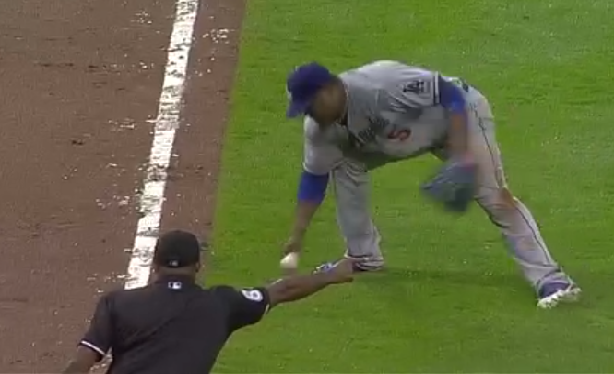 The umpire helpfully points to the base where the play is, but Uribe ignores him and leaves the ball on the ground, mainly because it's wet and rainy and terrible outside and who likes picking up and throwing balls in those conditions? Everybody's safe, and the Braves go

to put four runs across and take the 5–2 lead by which they win. Three sacrifices in one inning, two of the bunt variety and one of the fly, is impressive.

Lesson: bunt when it's rainy and the third baseman is Juan Uribe.

Here, by the way, is the result of a pitch in the Schafer at-bat before he laid down his squeeze:

Gerald Laird is that far down the line because he thought Schafer was going to be bunting. Schafer has a lightning bolt shooting at him because Gerald Laird is (a) the god of thunder and (b) angry. Why is Laird angry? Because Schafer swung at the pitch. Is there anything more terrifying than barreling toward home on a squeeze (and if Laird does anything in baseball, it's "barrel") and seeing the batter take a full swing?

Monday, May 13th, Target Field, Chicago White Sox in town, bottom of the eighth, Deunte Heath on the hill, Twins up 6–3. Oswaldo Arcia doubles and Aaron Hicks walks. Pedro Florimon steps to the plate. Heath goes 2–0 on him and then throws a fat pitch to bunt. The result: 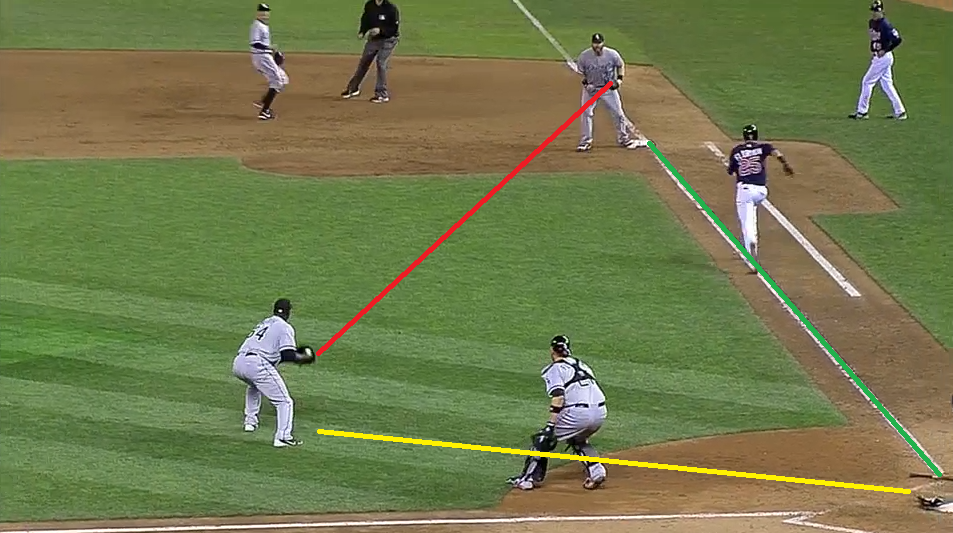 I have helpfully drawn for you the path of the ball, the path of the runner, and the place where Heath has to throw. Heath double-clutches, though, and that's all the fleet Florimon requires. What was a sacrifice turns into a hit and the bases are loaded.

The best is still yet to come, though, since a 3–2–4 double play comes off the bat of Brian Dozier, leading to an intentional walk of Joe Mauer, reloading the bases. This, though, is too much for the baseball gods to bear, and Heath unintentionally walks Josh Willingham before Justin Morneau clears the bases with a double. Ten to three is the score and that's the ballgame.

Lesson: bunt when you're fast and the pitcher isn't so sure of anything he's doing.

Monday, May 13th, Progressive Field, Yankees in town, second game of a doubleheader, Trevor Bauer pitching in the seventh with New York up one to nil. Corban Joseph doubles. Attorney General Alberto Gonzalez squares around to bunt:

Yan Gomes makes the sliding catch on a pop behind home plate. Nobody advances, nobody gets hurt. The Yankees shake off the poor execution, throw bunting to the wind, and do

against Bauer and Nick Hagadone and Matt Albers. A whole bunch of runs score. Six, I think. I lost count.

Lesson: no lesson. He's Alberto Gonzalez. He'd probably have made an out anyway. Sometimes a bunt literally just doesn't matter.

Tuesday, May 7th, Tropicana Field, Toronto in town, J.A. Happ pitching with the Rays down 1–0. A double and a single put runners on the corners with FrameStore Molina coming to the plate.

Joe Maddon calls for the squeeze. Edwin Encarnacion fields the bunt rushing in from first base and shovels to the catcher. Sean Rodriguez slides to the outside and attempts to get his hand in on the plate. J.P. Arencibia tries a tag. The umpire, Marty Foster, stands impassive. Rodriguez signals himself safe, but the umpire will not be moved. Arencibia rushes Rodriguez, who now, finally, attempts to dodge, but Arencibia tags him for the out and the fielder's choice is finally recorded.

Rodriguez is angry, claiming that he touched the plate and pointing to the swipe in the chalk-and-dirt like a tennis player calling attention to a ball mark in the clay. Maddon is livid. Maddon tries a reenactment:

Maddon's reenactment is wrong in a variety of respects, not least that Rodriguez's slide was to the outside and that Rodriguez actually left his feet. Maddon gives something less than an Oscar-worthy performance is what I'm saying.

Maddon is not permitted to do reenactments and is given the heave-ho, albeit rather calmly, almost, it seems, reluctantly. "You can't do reenactments," you can imagine Foster sighing. "I ain't mad at cha, but that's the rules."

There is more, but this ends the scoring with the tally now 4–1. Without Maddon to guide him, however, Joel Peralta gives up two runs in the top of a tied ninth and the Rays lose in the end.

Lesson: When performing your probability calculation to determine the value of a bunt (chance of a hit, chance of another ball in play that gives a good or bad result, chance of a wild pitch, chance of a walk, chance the bunt is just a popup, etc.), don't forget to include the odds that Marty Foster will blow the call at home.

Grand Lesson: I am terrified of death.

You need to be logged in to comment. Login or Subscribe
cdgarosi
"We're all human. I think." Hunter Pence is not human. He's the exception that proves the rule.

Also, this is as fine a piece as I've seen this week.
Reply to cdgarosi
doctawojo
1. Yes. At the very least he's the exception.

2. You're sweet. Thanks.
Reply to doctawojo
Schere
Don't fear the reaper.
Reply to Schere
smzont
This was incredibly entertaining, even before the Carlin reference.