On Wednesday, Jason Collette wrote an excellent piece on the improvements that Justin Masterson has made this season, specifically citing the right-hander's sudden ability to quiet the noise from left-handed bats. The article caught my attention for a number of reasons, including the revelation that Jason and I share an unreasonable affinity for Nick Swisher. Jason kindly dropped a reference to my evaluation of Masterson from the 2013 Starting Pitcher Guide, and the story came full circle thanks to the fact that Masterson had been assigned to me for podcast homework by co-host Paul Sporer at the conclusion of our most recent episode of TINSTAAPP.

Jason outlined some of the statistical differences in Masterson's 2013 performance, particularly noting his split stats versus left- and right-handed batters. Left-handed batters have accounted for 43 percent of all plate appearances league-wide since 2011, yet they tend to receive the majority of the attention when it comes to pitching strategy. Lefty hitters enjoy multiple advantages, ranging from the head start toward first base they get out of the box to the lesser gloves that typically populate the pull side of the infield (one of whom is tethered to the first-base bag).

The above stats reflect platoon rates from the 2012 season. The LOOGY phenomenon is a direct result of the perceived need to thwart left-handed batters, with the recognition that lefty bats especially struggle against southpaws. Sample size caveats aside, Masterson has had relative success against left-handed hitters this season, thereby addressing an issue that has plagued the right-hander throughout his career. In fact, when running the numbers for the most dramatic pitcher platoon splits of the past few years, Masterson's name appeared at the top of the list.

The following stats were calculated as (LHB – RHB). Negative values represent a lower mark against left-handed batters as compared to right-handers.

The above stats cover the period from 2011 through May 15, 2013, a time range that was selected for the purpose of capturing a robust sample size while staying within the confines of recent performance. It might be easier to look at just the career numbers, but pitchers have a tendency to morph over time, and one's ability to thwart various hitting styles can change over the course of a career. The ace of Cleveland's staff had the largest discrepancy in K rate among pitchers with at least 1500 opponent plate appearances since 2011, dropping 9.9 percentage points when facing lefties as compared to right-handed hitters.

The exaggerated ratio of left-handed hitters that Masterson has faced reflects the league-wide tendency for managers to stack the lineup with platoon bats, particularly versus pitchers with Masterson's mechanical profile. He is a pitcher with great posture but an extremely low arm slot, as he slings the ball from a nearly sidearm trajectory. Masterson is listed at 6' 6” yet releases the ball at a height of about five feet, thanks to heavy flex in his knees and a very low center of gravity in addition to the sidearm delivery. He stands as perhaps the tallest data point supporting the generally accepted theory that pitchers with low trajectories are more prone to platoon exploitation.

The concept is an extension of the general theory behind platoon splits: that it is easier to make solid contact on a pitch that is moving in toward the hitter and tougher to hit pitches that are breaking away. It’s the same theory that creates the common pitch-sequencing paradigm in which pitchers throw more breaking balls against same-side hitters but lean toward off-speed pitches versus bats that carry the platoon advantage. Along those same lines, a pitcher with a low arm slot is going produce pitch trajectories that follow a more horizontal path than a pitcher who throws over the top, making life easier on opposite-sided hitters yet more challenging for like-sided bats.

Masterson lacks a traditional off-speed pitch, but his slider has been the most effective weapon in his arsenal throughout his career, with an opponent batting average that is more than 100 points lower than against any other pitch type, according to BrooksBaseball.net. Logic suggests that his slider has been able to neutralize right-handed bats while getting handled by lefties, but the numbers paint a different picture. Masterson's usage patterns are basically the same regardless of batter handedness, and the slider has been his best pitch against batters from both sides. The slide-piece has been especially effective in 2013, and the secret to his success is likely tied to Masterson's increased reliance on the pitch, as this season he has upped the ante to a 26 percent usage rate with his slider against lefties (compared to a lifetime mark of 18 percent).

I was surprised to find Hellickson with the third-highest K-rate discrepancy versus left-handed hitters (Roy Halladay ranks second at 8.9 percent), not just because of my man-crush on Helix, but also given his heavy reliance on a changeup. He throws twice as many changeups as curveballs, going to the cambio on 30 percent of his pitches, and his approach to pitch selection is similar against batters on both sides of the plate.

One might expect him to load up on secondary stuff against lefties, but Hellickson actually throws a higher percentage of fastballs when port-siders are at the plate. Perhaps a change of plan is in order: opposing lefties have teed off on the four-seamer to the tune of a .575 slugging percentage during his career, compared to a .365 O-SLG by lefties on the change (as well as a higher K rate).

Hellickson follows the mechanical trend established by Masterson, exhibiting near-perfect posture and a low angle of arm slot, though his release point is nearly a foot higher than that of the crouching Masterson. The two right-handers are riding opposing trains of performance, with Hellickson having the roughest season of his young career. He has the underlying mechanics to support excellent pitch command, and the low angle of trajectory is less of a problem than is his pitch selection against left-handers.

Scherzer has continued his steady climb to acehood in 2013, trimming his walk rate to a career low of 5.5 percent while upping the K rate to a personal best of 31.8 percent. He is holding left-handers to just a .370 slugging percentage this season, helping to take some of the excessive shine off of their gaudy three-year mark of .470. Scherzer can generate whiffs on both sides of the plate, but his 7.7 percent decline against lefties is the fourth-highest split among qualifiers, and similar disparities exist with the other true outcomes.

Scherzer carries a three-pitch mix of fastball-slider-change, and he utilizes a prototypical usage pattern with breaking balls to like-sided bats and off-speed stuff to batters on the other side. The changeup is mixed in a quarter of the time against left-handers, regardless of the pitch count, but el cambio rarely makes an appearance versus righties (just 10 percent). Instead, right-handers are treated to Scherzer's vicious slider 28 percent of the time, while lefties see the slider at a rate of just six percent, thus avoiding Scherzer's most devastating pitch.

Scherzer has a ton of head movement near the end of his delivery, but most of the movement comes via a forward head-butting motion due to aggressive flexion of the spine, and he has close to zero lateral tilt. Scherzer is similar to Masterson in that he has a naturally low angle of shoulder abduction in addition to near-perfect posture, resulting in a sidewinder trajectory. Once again, the low arm slot is attached to large platoon splits, thus adding fuel to the fire of functional efficiency. There is greater variation in lateral movement for pitchers with an arm slot that rides below the three-quarter line, and these right-handers are exploiting their own kind while playing right into the hands of opposing lefties.

I wanted to point to a couple of outliers who fell short of making the cut for inclusion of the most lefty-phobic pitchers. Josh Collmenter and Lance Lynn each fell 400-plus plate appearances shy of the minimum to qualify, yet the K-rate deviance would have ranked them second and fifth, respectively, if I had lowered the threshold to 1000 pitches. What strikes me about these two players is the vast disparity in arm slot. Lynn falls right in line with our other platoon outliers, but Collmenter defies the laws of tradition with a delivery that is truly over the top. 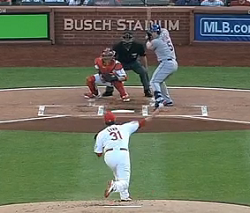 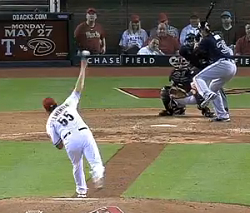 Ricky Romero is a spine-tilting pitcher who did qualify for the study, but his relatively modest K-rate split of negative 2.9 percent fell below detection level when considering the most extreme splits. Digging deeper, his split of 133 power points was the third-highest mark in the game, as left-handed bats pummeled him to the tune of a .493 slugging percentage. That factor alone was enough to merit a mention, but the fact that Romero is left-handed makes him possibly the most intriguing character in the cast.

Huge thanks to Ryan Lind and the BP stats team for invaluable research assistance.

You need to be logged in to comment. Login or Subscribe
matrueblood
Nothing here is stunning or surprising, per se, but it's a really nice piece. Arm angle and deception really do matter more than arsenal or blending factors in determining platoon vulnerability.

In general, the bulk of the intrinsic platoon advantage is about strike-zone control, not BABIP or power, so it makes sense that guys against whom same-handed batters struggle to pick up the ball (even including Collmenter) would have exaggerated splits, even greater than the ones observed for guys with typically platoon-heavy pitch arrays. Carlos Marmol is one guy whose splits have never been as large as his slider-dependent repertoire might portend, and I have always said it's because his mechanics are easier to read for righties than a typical slider monster's. I really don't think the platoon advantage is as much about the movement of the ball as about how batters see it out of the hand, and this seems to reinforce that. Great work, Doug.

Incidentally, as a nearly-blind non-athlete whose talent topped out in coach-pitch third-grade baseball, I have never had a great feel for just what makes certain pitchers harder and easier for same-handed hitters to pick up. The physical/mechanical/visual explanation of that phenomenon would make for an article I would enjoy immensely.

Again, fun read. Thanks.
Reply to matrueblood
lichtman
Being a little picky, but it could lead to some confusion:

An "off-speed" pitch in baseball refers to any pitch that is not a fastball. It surely includes curve balls and sliders.

If you want to refer to change ups and split finger fastballs, you pretty much have to say, "change ups" and "splitters."

Reply to lichtman
NYYanks826
I love how in that Scherzer GIF, his left leg looks like it is completely made of jello while in the middle of the leg kick.
Reply to NYYanks826