The stage was set for an epic duel in Arlington last Thursday, pitting perennial CY Young contender Justin Verlander against 2013's frontrunner for the hardware, Yu Darvish of the Rangers. The matchup was a slam-dunk selection for the Game of the Week on this week's episode of TINSTAAPP, and the hype was such that it took thoughtful consideration before co-host/BP colleague Paul Sporer reluctantly chose the “under” when I set the line at 23 strikeouts for the two starters combined.

To say that the game fell short of expectation is a massive understatement. Darvish threw 130 pitches in a game in which he surrendered four runs over the first four frames yet was in no danger of losing. Verlander saw to it that Darvish would get his seventh win of the season, surrendering eight earned runs before he could escape the third inning. The third frame of Thursday's game was the worst of Verlander's career—the Rangers plated seven runners, including two via bases-loaded walks, and the outing ended mercifully after Geovany Soto knocked a 97-mph fastball into the left-field stands for an 8-3 Ranger lead.

While recognizing that such a disaster start is within the realm of statistical possibility—one might argue that a pitcher with more than 1600 innings in the majors was bound to have one at some point—there is more to be learned through examination of the forensic evidence on the field. Before we delve into the mechanical details, allow me to review a history lesson in order to put Verlander's delivery against Texas into context. The following clip comes from an August 6, 2012 game in which Verlander battled the New York Yankees.

Verlander threw eight innings against the Yankees, striking out 14 batters and surrendering a single walk along with a pair of unearned runs. His fastball averaged 94.6 mph, with a steady trend of increasing speed that spiked at 100.7 mph on his 130th pitch of the game. Verlander’s mechanics were impeccable throughout the season, earning him one of just three “A” grades among starting pitchers in the 2013 SP Guide.

Verlander's velocity was down to start this season due to an array of innocuous factors that nonetheless sent the fans of Detroit into a minor panic. As Paul noted in the pilot episode of TINSTAAPP, Verlander played much of April in cold weather, beginning with an Opening Day start in Minnesota that featured a game-day temperature of 35 degrees. Pitchers typically take a couple of months to warm up to full speed, and the early-season velocity numbers also reflected Verlander's relatively short outings, as the pitcher famous for building velocity into the final frames had thrown only a total of three pitches past the seventh inning in 2013.

When he took on Texas, Verlander was coming off of a shaky outing against Cleveland in which he issued five walks over five innings, more free passes than he had allowed in any game since August 17, 2010. The battles with pitch command continued on Thursday, and though the box score shows just a pair of walks, it's worth noting that both of those free passes came with the bases loaded to force in runs. It was clear from the first pitch that something was not right with the former AL MVP.

Seemingly small mechanical disparities can speak volumes when watching a player with such an extensive track record, especially a pitcher who has Verlander’s efficiency and consistency. After watching the first pitch to Ian Kinsler, I wrote the following notes: “Weird, he had shite posture (for him) and a higher arm slot.” Initially, I wrote it off as a single-pitch deviation from his usual excellence, but Verlander struggled to find his delivery for most of the game. He would give up a pair of singles and an RBI groundout before a double play stopped the bleeding at 1-0 in the first, but the second inning began much the same way. Verlander’s initial offering to Nelson Cruz may as well have been a carbon copy of the first pitch to Kinsler just one inning prior.

Verlander had a tendency to miss wide to the glove side in the first couple of innings, as his typically-awesome delivery fell off track. When in top form, he takes a direct line to the plate and funnels all of his kinetic energy toward the target. His posture is typically excellent, earning a peak grade of 65 in the SP Guide, yet Thursday's misaligned motion included an imbalance that manifested into release point. This is all relative, and we’re talking about one of the best deliveries in the game, but such an elite baseline makes it all the more obvious when something goes awry. 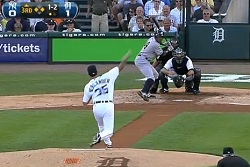 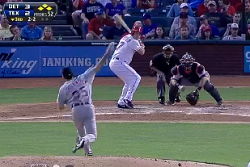 Poor posture results in an artificially elevated arm slot, so I decided to check the data for release-point height at BrooksBaseball.net. If his posture last Thursday was worse than vintage Verlander, then we would expect to see higher release points when compared to last August's start in New York. In order to get a better visualization of the contrast, I overlaid the release-point graphs for the two outings on identical scales and superimposed a straight line at the seven-foot mark for easy comparison. The results speak for themselves. 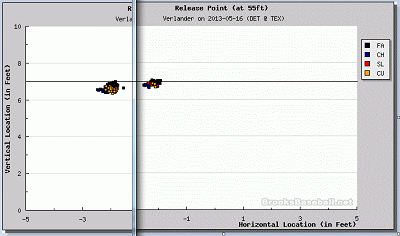 Verlander’s timing was inconsistent on Thursday, and it looked almost as if there was an invisible force causing Verlander's energy to veer left during the delivery, pushing him off-line to the glove-side. The right-hander's balance was also compromised, and though he has always had an element of drop-and-drive to his delivery, the motion on display in Thursday's game involved looser balance than what he had shown in the past. Verlander seemed to be aware of the problem, judging by his post-pitch frustration as well as the occasional delivery in which he appeared to stiffen his balance after foot strike.

Verlander traded spine-tilt and mistimed deliveries in the third inning, and though the first two batters reached via seeing-eye singles, the wheels fell off the BUS for a four-batter stretch that quickly dug him into a deep hole.

The plunking of Kinsler was clearly unintentional, and the Ranger leadoff man was happy to turn his back and stroll to first base, but the mistimed delivery would foreshadow imminent disaster. Verlander came back with a first-pitch strike to Elvis Andrus, but it was the only pitch of the at-bat that finished in the zone, resulting in a bases-loaded walk and a 3-2 score. Verlander narrowly avoided disaster in the following plate appearance, enticing a check-swing strikeout of Lance Berkman on a pitch that crossed up catcher Alex Avila and sailed to the backstop, yet a lucky ricochet and a friendly call kept the runners at their stations while Berkman was retired.

A four-pitch walk to Adrian Beltre plated another run, but after a visit from Tigers pitching coach Jeff Jones, Verlander suddenly rediscovered his mechanics as he faced Nelson Cruz with the bases still loaded.

The above pitch registered a clean 100.0 mph according to Brooks, silencing the velocity critics with a well-timed delivery that was one of several in the at-bat. The sixth and final pitch to Cruz struck a chord with me, as something about Verlander's timing and momentum set off a flash-bulb in my brain that compelled me to yell out “There it is!” just as he transitioned out of max leg lift (this despite the fact that nobody was home aside from my huskies).

Verlander continued to line up the delivery versus Mitch Moreland, getting within one strike of escaping the inning on a high note and with the game still tied, but Moreland turned on a slider for a two-run double that broke the game open and set up the death blow of Soto's round-tripper. The outing served as a harsh reminder that small battles with mechanical timing and positioning can turn even the best pitcher in the game into a mess of inconsistency.

Do you think the Tigers coaches or Verlander himself are aware of this mechanical issue? Not just that there is one because obviously he was off from the start.

Is this something they might try and fix during the game or is it one of those "this is what I have today" deals?
Reply to Schackmj
tombores99
I imagine that both the Tigers coaches and Verlander himself are aware of the problem. Verlander's body language indicated that he knew that something was off.

Fixing mechanics in-game can be problematic, but some issues are easier to address than others. I found it telling that Verlander literally slowed down the delivery after the mound-meeting with Jones, and was able to line up a couple of pitches before he lost it again, so that appeared to be an intentional adjustment as directed by Jones. But in many ways what you see is what you get, and sometimes you just have to chalk it up to a bad day.
Reply to tombores99
Leg4206
We can assume the posture issue/higher arm slot is not a conscious effort to do so, correct? If so, then what is causing it and the associated (I assume) falling off left at the end? Even on the well-timed pitch, he seems off balance after the finish.

He does seem to have more drop compared to last year, but I might just be imagining that.
Reply to Leg4206
tombores99
I am making that assumption, but it's impossible to know for sure without sitting in Verlander's brain. He generates a tall enough arm slot without any spine-tilt manipulation, and the timing of his posture change coincided with the high-energy phases of rotation, suggesting that he was not able to support ideal balance at max intensity that day.

This could be the result of too much adrenaline, as Verlander may have been amped up in anticipation of the hyped matchup, and could have upped the intensity beyond his personal thresholds for balance.

I agree with the extra drop, as mentioned in the piece, and it serves as an indicator of lesser balance than in the past.
Reply to tombores99
cdt719
There's a minor typo in there, August 17, 2000 instead of 2010.
Reply to cdt719
bornyank1
Fixed.
Reply to bornyank1
DetroitDale
Jeff Jones is better at most at spotting these things, and Verlander is better than most at fixing these things.

For all his problems with velocity earlier in the year, he was throwing his hardest yet in that disaster game.

The buzz from the clubhouse is he worked on it after the start and believes he fixed the problem.

I would not want to be a Cleveland Indians hitter Tonight
Reply to DetroitDale
KerryHofmeister
Very good stuff.
Reply to KerryHofmeister
HAL9100
Also the last sentence is curious; When did Clayon Kershaw face small battles with his mechanical timing and positioning?

You've got Mike Avila as the catcher when it should be Alex Avila.
Reply to Shauncore
bornyank1
Fixed.
Reply to bornyank1
andrews
His problems with fastball command started off the start before where he walked 5.

He's clearly aware of the issue from his postgame interview.