At some point, you’ve probably thought to yourself that you could do a better job than the man on the mound for your team, especially if your team has ever employed Jonathan Sanchez. And every so often, amateurs do get the chance to outshine actual pitchers. These brave volunteers are known as “position players,” and they’re occasionally called in to provide a desperate manager with outs so that a blowout game may mercifully end. Surprisingly, these rescue arms are not off-the-charts terrible, with position players who’ve debuted since the 2000 season posting a combined 6.84 ERA (6.76 FIP) in 51 1/3 innings—and that drops to a 5.11 ERA (6.34 FIP) if you exclude Paul Janish’s two rough innings.

The Yankees were in dire straits on Wednesday night after the unpredictable Phil Hughes lasted only 2/3 of an inning, surrendering seven runs on six hits and two walks. This forced manager Joe Girardi to get 5 2/3 innings of long relief from Brett Marshall in his major-league debut. After Marshall’s pitch count reached 108 pitches with two outs in the ninth, Girardi asked Alberto Gonzalez, a journeyman infielder with no prior professional pitching experience, to get Robert Andino out. Somehow, he did. (Granted, Andino, who owns a .236 OBP, is among the easiest outs in baseball. But still.)

Let’s see how Gonzalez’s performance matches up with recent position-player pitching appearances, using some common observations about these kinds of occasions. (I used the pitch data of all position-player appearances in the PITCHf/x era.)

Position players work quickly on the mound
Pitchers develop routines between pitches. They walk around the mound, adjust their caps, blow into their hands, and so on. Position-player fill-ins have no such routines. There typically isn’t a ton of strategy to the way they pitch, and they appear only in blowouts. As a result, position-player pitchers take on average just 14.3 seconds between pitches. The average for regular hurlers is about 22 seconds.

Gonzalez set a very rapid pace in his outing, averaging 10.8 seconds between pitches. That’s the third-fastest pace on record, as a matter of fact. That up-tempo approach keeps hitters on their toes and defenses alert.

Pitch speeds tend to sit between the upper 70s and the mid-80s
With the exception of Joe Inglett, who lobbed pitches at 53 mph for the Brewers a couple of seasons ago, position players throw only about 5–10 mph slower than regular pitchers. A few guys, like Skip Schumaker, can even hit regular pitch speeds. (Schumaker topped out at 93.4 mph in his August 23, 2011 appearance.)

A lot of fill-ins have off-speed pitches
Obviously, most stand-in pitchers are fastball-heavy. For them, a four-seam fastball is as simple as “playing catch” with the catcher. But more than a couple of the guys showed breaking balls or changeups in their repertoires. Chris Davis struck out Jarrod Saltamacchia on a split-finger fastball, and Skip Schumaker broke out a curveball in his last outing. Jeff Cirillo flashed a slider, curve, and change in his 2007 relief appearance.

Gonzalez showed no hint of having an off-speed stuff to get guys off his fastball. That won’t cut it. Even Aroldis Chapman and Craig Kimbrel need softer offerings.

Position players throw high in (and above) the zone
For whatever reason, only regular pitchers are able to consistently throw strikes near the bottom of the zone. Here’s a plot (with an averaged strike zone) of pitch locations for all position players in the PITCHf/x era: 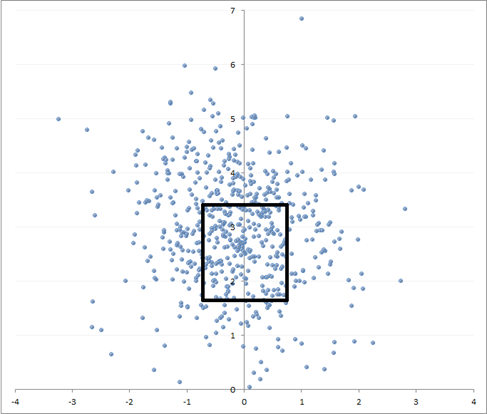 For the sake of comparison, here are Gonzalez’s pitch locations as displayed by Brooks Baseball. 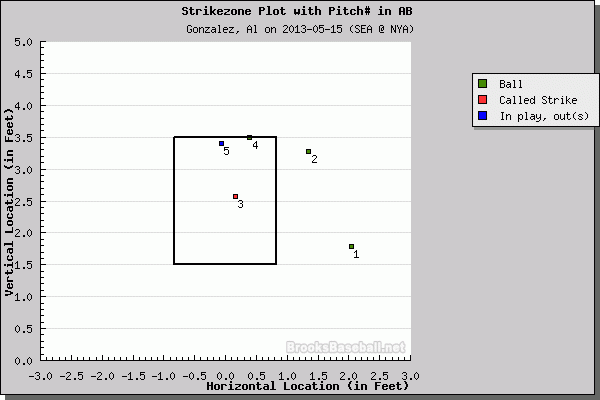 Gonzalez also threw pretty high in the zone, and his first couple of pitches missed the target wildly. That invites a lot of deep counts and hard-hit balls.

Mechanical problems abound—but they do in regular pitchers, too
The pitching windup is a lost art these days, as our own Doug Thorburn has demonstrated. The injury-inducing kinetic flaws in the windup that many hurlers have—such as the infamous “inverted W”—creep into our substitute pitchers’ motions. Schumaker makes the inverted W in his windup, for example. A grading curve may be appropriate in this section of the scouting report.

Gonzalez works out of a simple stretch, raises his leg gingerly, cocks his arm soundly, and then lunges forward with his delivery, rather than letting his arm drag behind his body, as some pitchers today do. He ends the delivery in good fielding position. Still, it looks like he could benefit from better leg drive.

Overall, Gonzalez acquitted himself pretty well as a substitute pitcher. His career ERA is a cool 0.00 for now, but he’ll need to consider adding an off-speed pitch if he really wants to join the elite corps of emergency arms.