As the calendar turns into May, we're still seeing new arms pop up on the PITCHf/x radar. This week, we look at a pair of emergency call-ups. And now that we have a month of data under our belt, we can take a look at the best of the new arms in velocity and curveball drop.

The Dodgers called on right-hander Matt Magill as an emergency starter to replace Stephen Fife, who had been promoted to replace Chad Billingsley. Billingsley's damaged ulnar collateral ligament begat Fife's shoulder bursitis, which begat Magill's debut. Magill was the ninth starter used by the Dodgers this April.

This year's Prospectus covered Magill for the first time, after passing him over five previous times. He’s not exactly a hot prospect, as it explained:

A 31st-round 2008 pick, Magill had never gotten much attention as a prospect prior to 2012 because his stuff was considered fringy, but thanks to a significantly improved changeup, he took a big step forward to fill the organizational void left by the trades of Rubby de la Rosa, Allen Webster, Nathan Eovaldi, and Ethan Martin. He led the Southern League in strikeouts and strikeout rate, and cut his home-run rate in half thanks to an increased groundball rate and the move to the more pitcher-friendly league. Added to the 40-man roster this winter, he could get his first big-league look in 2013.

Magill got some BP love again when he was named a prospect to see at the “Must-See Affiliate” for the Dodgers, Triple-A Albuquerque of the Pacific Coast League.

Magill acquited himself nicely, working into the seventh inning in a losing effort. Here's what he threw against the Brewers:

As you can see from the splits charts, his changeup was only featured against left-handed batters. The slider reads like a power pitch, not a lazy curve or a slurve. We should get another look at him as he remains with the Dodgers at this writing.

When the Red Sox found themselves in need of an extra arm in the bullpen, Twitter got lit-up with Steven Wright quotes. Folks of a certain age (mine) can't help but make the reference. But the Steven Wright of the Red Sox is not a laconic comic; he's a knuckleball pitcher. 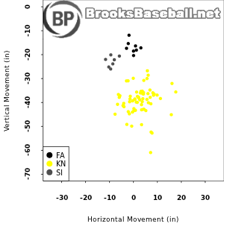 Wright got his cup of coffee on a cold and misty Boston night. He wasn't exactly Tim Wakefield and got knocked around in 3 2/3 innings of long relief, and the Red Sox sent him back to Pawtucket after the game.

Wright's fastest pitch was clocked at just under 88 mph. That's the slowest “max effort” of the 29 pitchers to make their big-league debuts through May 1. The speed leader is Detroit's Bruce Rondon. Like Wright, he was recently demoted, but not until after he made three relief appearances. In those limited looks, he maxed out at an eye-popping 102.3 mph and hit triple-digits regularly. No other new arms have shown that kind of velocity, but starters Jose Fernandez and Allen Webster have both topped 98. That's impressive, too.

There are a few ways to measure movement on a pitch, or drop on a curveball. With my way, 60 inches is a lot for a pitch to drop on the way to home plate, even if you stretch out the flight path and include gravity. Five new arms have dropped the big hammer this year. Clemens obviously has good stuff, as he made both of these lists.

You can dive into a few these guys some more, and not just on their pitcher cards. I covered the aforementioned Fernandez along with Maurer and Ryu in an earlier edition of this column. Burgos got his first look in the World Baseball Classic, and Clemens was part of an all-Astros new arm review.

You need to be logged in to comment. Login or Subscribe
wendtm
Magill had a very Collmenter-like over-the-top, not a lot of variety to his stuff look. Should play ok in that park.
Reply to wendtm
wendtm
And why doesn't Clemens strike out more guys?
Reply to wendtm
Leg4206
Clemens' curve profiles better using these metrics than it plays on the field. It is humpy and easily recognized. Not a sharp breaker at all.
Reply to Leg4206
harrypav
this side-view flight path seems to confirm that