Like many fans with MLB.tv access, I spent the first 24 hours of the new season binging on baseball. That meant taking in the Rangers-Astros, Red Sox-Yankees, and Royals-White Sox games. Along the way I wrote down some observations about a few players.

Jason Castro
PECOTA and I disagree on Castro's offensive outlook. The algorithm sees Castro hitting .238/.319/.351 with eight home runs this season in a hair fewer than 500 plate appearances. I'm more optimistic about the Stanford product and former first-round pick's chances of being an offensive asset independent of his position. Castro's problem to date has been an inability to hit same-handed pitching. He boasts a career True Average of .286 against righties and .113 against lefties—that's the difference between Jason Kubel and Lucas Harrell's 2012 offensive production. Castro did me no favors on Sunday night, going 0-for-4 against southpaws Matt Harrison and Joseph Ortiz. Still, I came away pleased with Castro's efforts behind the plate.

A few years ago A.J. Hinch, now a member of the Padres front office, said that "one of the best compliments you can give a catcher is that he’s unnoticeable." Despite catching the wild Bud Norris, Castro was close to unnoticeable on Sunday night. He never appeared out of control or bothered by his battery mate's unpredictability. Instead Castro caught the ball softly throughout the game, and perhaps stole a few strike calls, like these: 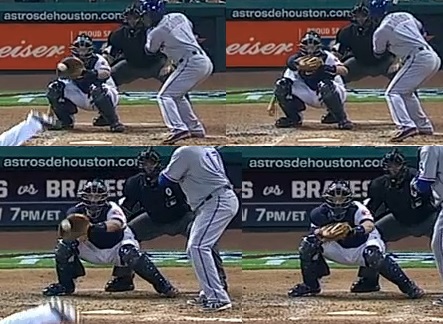 Smooth and easy unlike Castro's counterpart A.J. Pierzynski, who seemed to stab at the ball a lot. Castro even overcame Norris' efforts to sabotage him on David Murphy's attempted steal in the second inning. Watch Castro's mitt on the play. He sets up away from the batter but the pitch, a fastball, forces him to move the mitt up and across the plate. After catching the ball the momentum takes Castro's mitt up around head level, yet he recovers and makes a clean transfer and a good, accurate throw to nail Murphy at the base. My amateur attempts had his pop time around 1.8 seconds.

Castro's future in Houston is unclear. The Astros have plenty of reasons to keep Castro, beginning with his potential as a solid all-around backstop and ending with the "Can't spell Castro without Astro" headlines sure to follow a long-term extension. At the same time Castro turns 26 during the season and will qualify for arbitration afterward. If Houston thinks it's three or four years away from contending then trading Castro at his peak value makes sense. Especially since Castro's stock could be on the way up this season if he hits like I think he can hit.

Jon Lester
I can't offer a full review of Lester's start because I missed the fourth inning, his worst of the day. I do want to highlight two fifth-inning sequences that led to his final two strikeouts of the day. First Lester adjusted after seeing Eduardo Nunez foul off three fastballs and cutters by throwing him a 1-2 changeup. The pitch wasn't well-located—it was dead-red, actually—but Nunez was so bent on fastballs that he swung through the pitch for strike three. Two batters later Lester sped up Wells' bat then left him frozen. He went to a fastball away for a called strike one, tossed a changeup down and in that Wells yanked foul, then went to a backdoor fastball. Wells froze and the inning, as well as Lester's day, were over.

CC Sabathia
Sabathia has not regained his low-to-mid-90s velocity. Instead he was sitting in the upper-80s throughout most of the game. On a perhaps related note: seven of the Red Sox' eight hits came off fastballs. Those two factoids don't necessarily mean a whole lot going forward, of course. Sabathia is permitted a bad day. But if he has another bad day or two in a row look for his declined velocity to come under fire.

James Shields
Shields began his Royals career the same way he ended his Rays career: with a 1-0 loss at the hands of a division rival. He didn't have his best changeup and he had to battle as a result. When Shields is right he's able to locate his changeup and curveball for strikes as well as bury them below the zone. He wasn't quite able to do that on Monday, which led to an inefficient outing. Kansas City hasn't had a pitcher toss 200 innings since Zack Greinke in 2010, so Shields' ability to eat innings on what amounts to a bad day while keeping the Royals in the game is a nice deviation from the usual.

Mike Moustakas
On a day where the Royals failed to muster a run it's no surprise to learn their three-through-five hitters went 2-for-12 with five strikeouts and a walk. The poorest at-bat of the afternoon belonged to Moustakas. In the eighth inning Robin Ventura called on Matt Thornton to prevent Moustakas from plating the tying run stationed on third. Thornton did his job on three pitches, but he owes Moustakas a club sandwich for two baffling swings:

In the image on the left Moustakas is attempting to check his swing on a slider inside that he had no business thinking about swinging at. The image on the right shows Moustakas swinging through an elevated fastball. He's not close to contact, let alone good contact, in either image. If the Royals are going to make noise this season they'll need Moustakas to have better at-bats in key situations than the one he had against Thornton, in which he looked overmatched.

Tyler Flowers
Believe it or not it's only been a little over four years since the White Sox acquired Tyler Flowers. In the seasons since Flowers has been teased time and again as Chicago's catcher of the future. With A.J. Pierzynski elsewhere Flowers should get most of the playing time on the South Side. The end result is likely to resemble something out of Kelly Shoppach's playbook: a decent platoon backstop who sprinkles 15-20 home runs in with a ton of strikeouts. Flowers got off to a solid start on Monday by providing the only run of the game on a fifth-inning home run.

Flowers gave Shields a battle all day. The first at-bat lasted seven pitches, even after Flowers spotted Shields a first-pitch strike by failing to check his swing on a bad curveball. From there Flowers fought off a variety of fastballs and changeups before a front-door cutter caught him looking. In the second at-bat Flowers almost went around on another first-pitch curveball but held off just enough to move to 1-0. After fouling off a fastball, taking another curveball for a ball, then whiffing on a changeup, Flowers got the equivalent of a BP fastball: an 86-mph changeup up and in:

Doug Thorburn talks about balance and posture a lot when analyzing pitchers. Take a look at where Shields' head is pointed at release on the mistake pitch. If Shields did see the target all the way through his delivery then credit him with excellent peripheral vision. While we're at it go ahead and credit Flowers with a win via decision.

You need to be logged in to comment. Login or Subscribe
randolph3030
I really enjoyed this. I hope that you do this kind of piece a bunch this season
Reply to randolph3030
RJAnderson
Thank you. I'll see what I can do.
Reply to RJAnderson
lloydecole
I agree. Great stuff.
Reply to lloydecole