Over the past two weeks, researchers from the University of Sheffield discovered a gene that might make it possible to prevent premature birth, started a center dedicated to improving the diagnosis of coeliac disease, and committed to map the human musculoskeletal system for a model that could lead to personalized, effective treatments for chronic bone disorders. And then some other researchers from the University of Sheffield stole their thunder by compiling the world’s first database of baseball statues.

It’s not immediately obvious that the baseball statue database has the same scientific value as some of the University’s other innovations. But someday—after researchers from the University of Sheffield discover a cure, probably—people will forget that coeliac disease ever existed. And on that day, we’ll still need to know where all the baseball statues are. Which, evidently, is pretty much everywhere except the Great Plains*: 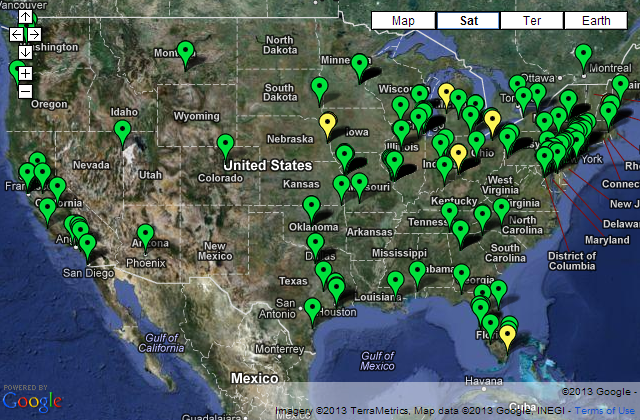 So it’s nice to know that someone is keeping track. Especially since we’re living in an era of exponential growth for baseball statues. According to Dr. Chris Stride, one of the two people who’ve spent the past 18 months building the baseball statue database, “90 percent of baseball statues have been erected since 1990, and over half in the last decade,” thanks to “innovative marketing strategies of baseball franchises based around branding through nostalgia and reflected glory.” If we hadn’t started tracking them now, while the number of statues is still manageable, we might never have gotten around to it. And then just when we needed a certain statue, we might not have remembered where we put it.

Most of the statues, as one might imagine, are of famous figures: legends on the field, in the front office, and in the broadcast booth. Others depict people who made some memorable off-the-field contribution to a particular institution or community—long-time college coaches**, and local politicians who brought minor-league baseball to towns. But there are also some big leaguers who got statues without very statuesque stats. Most of them were pretty good players; they’re just below the lofty replacement level for this accomplished group.

Here are the players whom you probably wouldn’t expect to have statues. (Busts, statuettes, and figurines need not apply.) You can see the rest at SportingStatues.com.

Geronimo gets a statue because he shared a lineup with some statue-worthy players. 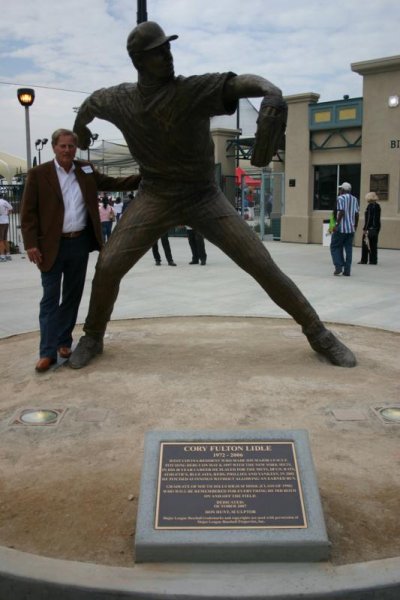 Lidle’s high school erected this memorial after his untimely death in October of 2006. 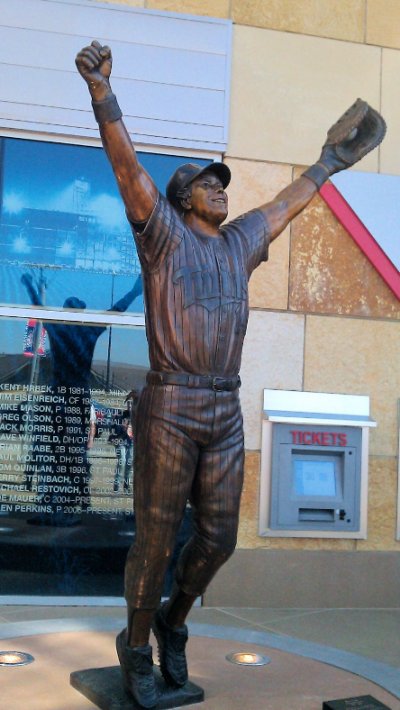 At least two other major leaguers have attended Joliet Central High School: Garland Buckeye and Bill Sudakis. So far, no statues for them. 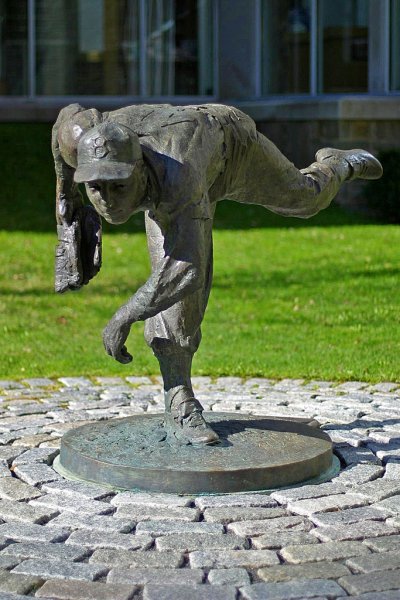 Podres had the same career ERA+ (105) as Jack Morris, who will almost certainly have a statue of his own someday.

McNally has both Podres and Morris beat: his career ERA+ was 106. 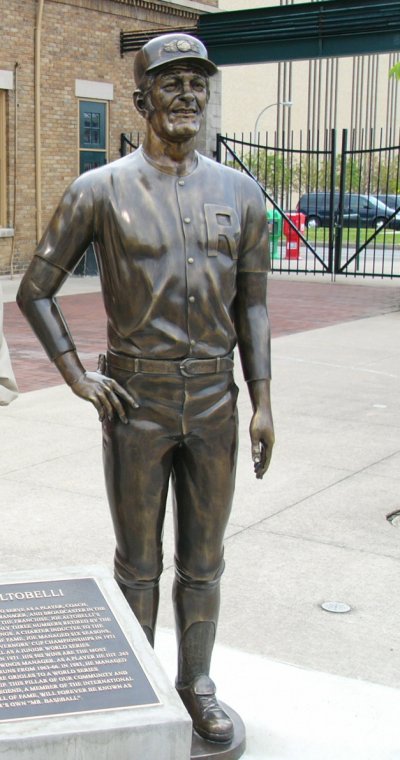 Altobelli is the “only man ever to serve as a player, coach, manager, general manager, and broadcaster in the storied history” of the Rochester Redwings. In the majors, he hit .210/.277/.323 in 290 plate appearances and managed the Giants, Orioles, and Cubs to a collective .485 record in seven seasons.

Nuxhall hung around for the better part of two decades as a league-average starter, but plenty of pitchers have done that without getting statues. If you know him, it’s probably because he pitched in the majors at age 15 or because he called Reds games on the radio for almost 40 years.

Not really surprising—Big Klu hit at least 40 homers and finished in the top 10 in MVP voting in three separate seasons—but the value stats suggest that his defense and baserunning reduced his overall value to Hrbek-ian levels. 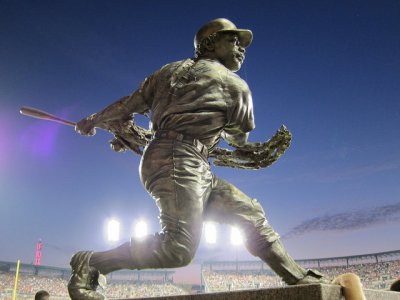 Horton grew up in Detroit and was a popular player for the Tigers for 15 seasons, so this is more of a sentimental statue. From Horton’s B-Ref Bullpen page: “A good but not great ballplayer, his statue nonetheless proudly graces Comerica Park among the Tiger greats.”

Nicholson posted a 161 OPS+ from 1942-1944, a period during which many of baseball’s best players were busy pursuing side projects.

Honorable mention: Don Larsen, whose stats weren’t especially good but whose statue isn’t all that surprising.

*To be fair, the Great Plains are pretty much empty of everything.

**Like Pete Beiden, who coached Fresno State for 21 seasons and whose statue’s inscription includes this confusingly worded quote: “Pete was one of the greatest fundamentalists to ever coach the game of baseball.”

Other quotes from former players about Beiden, from this story on the statue’s unveiling:

1. “If Pete were here today, I know what he’d say. I don’t know what in the heck the gaw-dang fuss is all about.”
2. “He called me Ivanhoe, Visalia, Clem, and a lot of other things I won’t tell you. He just had this charisma. He’d call you anything, and you’d respond. I’m sure he knew everybody’s name, though.”

You need to be logged in to comment. Login or Subscribe
dwachtell
The confusingly worded Pete Beiden inscription makes me wish for a compendium of poorly worded statue inscriptions. As a serious Yankee-hater, I got a great dose of schadenfreude when Steinbrenner's plaque in Monument Park included this doozy:

"A great philanthropist whose charitable efforts were mostly performed without fanfare, he followed a personal motto of the greatest form of charity is anonymity."
Reply to dwachtell
jdouglass
Even if it's just a statue, I still wouldn't try to advance to 3B against that Barfield monument.
Reply to jdouglass
BarryR
It's 1957 and my father takes me to my first baseball game. We go to Brooklyn,where the Cincinnati Redlegs are in town for a twinight double header. There I saw Ted Kluszewski in person (and in color, since on TV everything was sort of gray) for the first time - it was awesome. I had never seen a human being with arms like that, the bat seemed like a tooth pick in his hands. The Redlegs (as they were known in that era, so people wouldn't think they were communists)wore the vest-type jerseys. Big Klu wore his without a shirt underneath, making his arms and shoulders look even more impressive.
Klu in 1954 - .326/.497/.642 167 OPS+, 141 RBI - he hit 49 HR and struck out 35 times, one of three times in his career he hit at least 35 HR with fewer K than HR.
Reply to BarryR
BarryR
Bill Nicholson led the NL in HR and RBI in 1943 and 1944. He also led the league is strikeouts in 1947, which is why he was known as Swish. It is safe to say that no future players will be given that nickname.
Reply to BarryR
dpease
Hrbek's statue is very slim-ifying. I approve of this trend.
Reply to dpease
Tarakas
Nice, fun article.
Reply to Tarakas
lucasjthompson
Look Bucko, for one thing, fangraphs and BR WAR give Hrbek 42 and 36 WAR respectively, so you might want to recalibrate that cute little WARP machine you operate.

Second, he's something like the 5th- or 6th-best position player in Twins history, and Killebrew, Carew, Puckett, and Oliva already have statutes, and certain statue fascists think that Mauer shouldn't get one until he retires. Does the statue-less Bob Allison have a beef? Maybe, but...

Hrbek has won 100% of all Twins World Series victories, which is the sort of thing teams remember when deciding for whom to build statues. He's second in Twins RBIs, home runs, and walks. Third in games played. He simply removes people from 1st base when necessary to win playoff games. He has a modestly popular fishing show.

Anyway, Sir, your article is the sort of thing for which no statue should be built, and if one WERE built for this article, I would write an article about how it was the stupidest statue ever.
Reply to lucasjthompson
BurrRutledge
Luke, I think of these statues, and Ben's writing about them, as a way of recognizing achievements that might otherwise go underappreciated.

Does the statue tell us how to pronounce Hrbek, by the way?
Reply to BurrRutledge
MarkJLutz
I suppose that some players, coaches, etc. get statues mostly because they were good people, and if no one made a statue to honor them, many would forget them entirely. In any case, I will keep checking the Sheffield web site in anticipation of that Smoky Burgess statue.
Reply to MarkJLutz