The World Baseball Classic produces a lot of things: a good dose of drama, a mix of middling and world-class play, and PITCHf/x data on guys we haven't seen before and may never see again. We'll play the scouting notes match-up game once again, leaning on Jason Parks and his team as much as possible, as well as on player comments from the 2013 annual and an interview from the BP archives.

Team Italy brought us Matt Torra and Pat Venditte, the ambidextrous Yankees prospect who, because of shoulder surgery, is currently only pitching with one arm. Brewers Prospect Hiram Burgos was entrusted with big innings for Puerto Rico. And the Puerto Rican national team also featured highly touted Twins prospect Jose Berrios. We'll round out this week’s group with another Brewer, Michael Olmsted, who appeared in a non-WBC game against the Rangers.

Before digging into the aforementioned quintet, I want to mention that this may not be our last batch of new World Baseball Classic arms. As I wrote this, the Dutch national team was facing the Padres in Peoria, Arizona, one of the spring training parks that is equipped with PITCHf/x cameras. That means we should have data on some of the Dutch arms before they even arrive in San Francisco. And since a few of the guys who appeared over the past week didn’t make the cut for this edition, we are still keeping some powder dry.

Without further ado, here are some notes on this week’s five…

“Reinvented himself as a finesse pitcher after shredding his shoulder.”

“A changeup-tossing eater … rarely gets out of the 80s any more, but he fills the strike zone with three pitches.”

Torra is not overpowering—or, at least, that’s what the message seems to be. But, guess what: He averaged better than 90.5 mph with both his four- and two-seam fastballs. That’s not overpowering, but it does suggest that his arm has bounced back from the labrum-repair operation that he underwent in 2005. He threw six sinkers, five heaters, five changeups (83 mph) and four sliders (86 mph) in this outing.

His four-seamer seems to have a bit of cutting movement, while his two-seam sinker really runs and sinks in comparison, giving Torra a nice contrast between the two hard offerings. 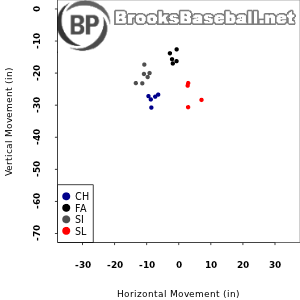 Torra could provide useful depth for a stacked Nationals rotation. Look for him to begin the year with Triple-A Syracuse.

Interview Notes
“From the right side, I rely a lot more on my fastball; I throw a curveball but rely heavily on my fastball.  From the left side, I rely predominantly on my slider, which I throw from a low three-quarters slot, and an occasional fastball.  I don’t have as much velocity from my left side, so I have to do certain things to equal it out.  One of those things is being able to locate offspeed pitches, which is one thing I really need to do in order to get hitters out. …  I grip my slider the same way I grip my curveball.”

Player Comments (2011 annual)
“Stuff isn’t great, but he has excellent control, a great strikeout rate, piles up the grounders, and always has a platoon advantage. … Throws a low-90s fastball and a plus slider.”

PITCHf/x Review
Venditte is recovering from surgery on his right shoulder, so it was disappointing to only get half of his stuff. It was still nice to see him pitch as a southpaw in the World Baseball Classic, but unfortunate that we weren’t treated to a unique, double-barreled PITCHf/x phenomenon.

On a different notice, I was glad to read that Venditte grips his curveball the same way that he grips his slider, because the latter pitch looked like a curve to me. 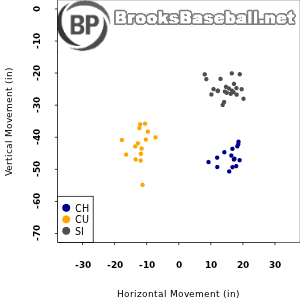 The movement in the above graphic is driven by the lower arm slot that Venditte described; his fastball gets labeled as a sinker, but it’s possible that he is using a four-seam grip. Meanwhile, because the interview is from five years ago, Venditte’s approach has changed somewhat—and in particular, he has lessened his reliance on the slider. The fastball/sinker averaged only 82 mph, the changeup 76 mph, and the slider/curve 70 mph. And those mediocre readings were produced by his healthy arm. 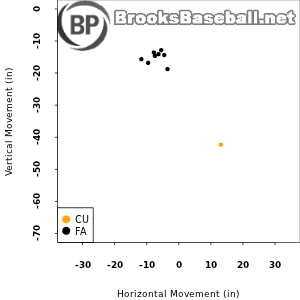 Olmsted only threw one slider in the outing, and it was labeled as a curveball because of its two-plane depth. The fastball wasn't quite as good as advertised, averaging under 92 mph, but that's not a huge divergence from the scouting notes above, given that it’s only March, and Olmsted may not have been airing it out. If he can combine mid-90s heat with the breaking ball he flashed, he has the tools to be a useful big-league reliever.

Scouting Notes
The Brewers don't have many sure things in their 2013 rotation, but they do have plenty of young arms that could possibly succeed. [Burgos] could be a long shot for the Opening Day roster.

PITCHf/x Review
Hey, we already talked about this guy … almost. Finally, we have some data. The scouting notes don’t offer much in the way of specifics, but the small PITCHf/x sample produced in his strong World Baseball Classic outing gives us enough to discuss. Burgos showed four pitches in the appearance. 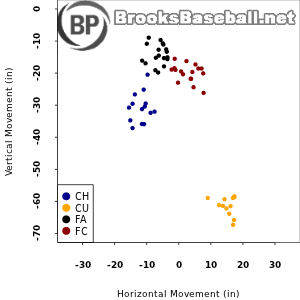 Burgos looks like a crafty right-hander, with a fastball that averaged 89 mph, but also a nice cutter two ticks lower, at 87 mph. His curveball (72 mph) has a lot of break, dropping 45 inches more than his fastball does on its way to home plate. Toss in a changeup, and you have a potential starter.

To reference the beer theme from the afore-linked article and complete the ranking, put Burgos in the ale group with a real shot at the fifth slot in Milwaukee’s Opening Day rotation. Whether he earns that role or not, he is very likely to see time in the majors this year.

Player Comments
“Throws in the low- to mid-90s, with a lot of potential to develop a plus curve or changeup down the line.”

PITCHf/x Review
We didn't get to see the changeup in this appearance, and Berrios only threw one curveball (79 mph) that missed the zone high. The bender does show two-plane break, but I’m not sure I’d call it a “hard curveball.” Then again, it’s difficult to describe the pitch based on one offering that came out of his hand poorly. The fastball averaged nearly 94 mph in this short outing. 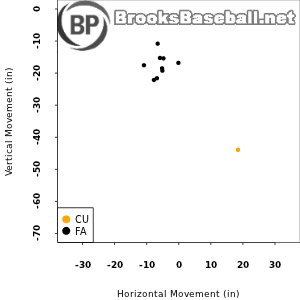 We're not going to see Berrios in the majors anytime soon, as he’s entering his age-19 season and has just 30 innings of Rookie-level ball under his belt. Berrios’ arm talent makes him a prospect worth tracking, but he will require patience and anticipation.

You need to be logged in to comment. Login or Subscribe
Chucko
Olmstead pitching for Dominica is amazing, but I can't find any articles on how it came to happen. What's the story?
Reply to Chucko
NathanAderhold
Pretty sure Olmsted isn't in the WBC, and definitely not for DR. He must have gotten mixed up with someone else?
Reply to NathanAderhold
harrypav
Yes, that seems to be the case. It's Olmsted, but how he popped up as being on DR I haven't figured out.
Reply to harrypav
bornyank1
Fixed.
Reply to bornyank1
harrypav
I still think he should apply for a DR passport.
Reply to harrypav